Spring and early summer skiing in the Scottish Highlands

As the days lengthen and snowline retreats the focus for backcountry skiing inevitably gravitates towards those high north and east-facing corries and burn lines where snow is known to linger. By their nature these places tend to be remote and hard-of-access and their reaching requires determination, even a little stubbornness, and quite likely the use of a bike. Based largely on adventures undertaken over the last decade or so I have compiled a personal top ten of late season locations that offer non-technical skiing, ordered very roughly in terms of longevity of snow, though this of course will vary year to year. I can’t claim to know each of these spots intimately but can vouch that, given the right conditions, they offer huge reward for those willing to make the effort and explore. The list is far from exhaustive and I’m sure there’s plenty more stories to come.

Even when the winter ends early and the hills have lost their cover it always pays to keep the skis ready through April and well into May. Every few years late blizzards can deliver superb conditions which for those who drop everything and head for the mountains will guarrantee some of the best days of the ‘winter’ 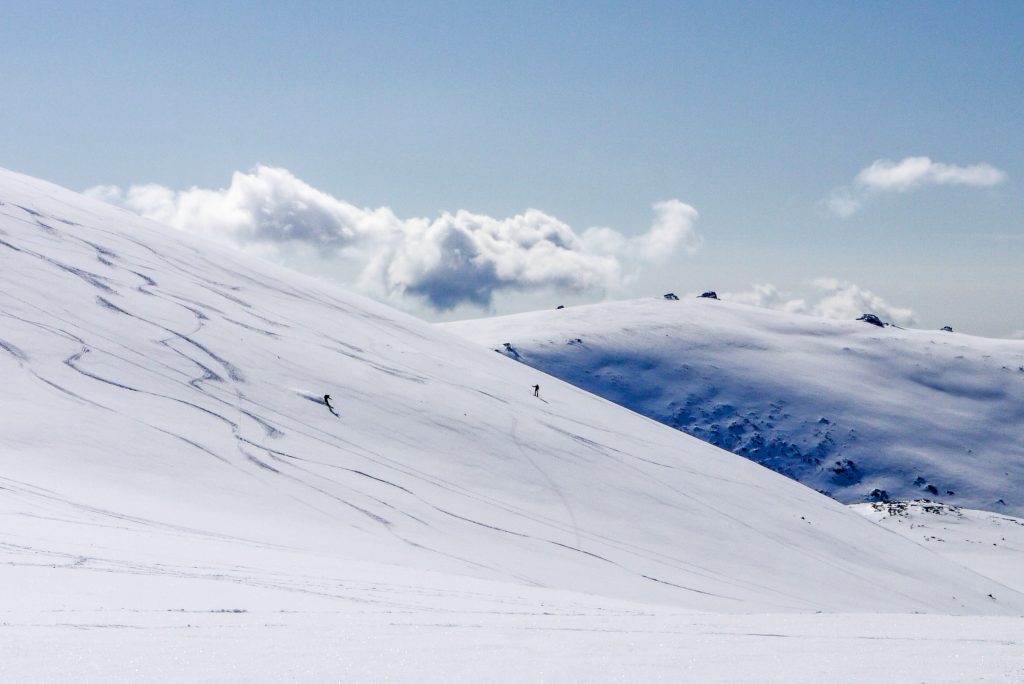 Skiing the summer solstice was once a yearly tradition in the Highlands, often taking place in the easily-reached Ptarmigan Bowl or upper Coire na Ciste, but alas the warming of recent decades has pushed aficionados deeper and higher into the hills, and now the only sure place for a mid-summer slide is Garbh Uisge Mor of Ben Macdui. Here, and beginning at the plateau rim at 1300 metres, are the last snows in Scotland, a broad white field then a ribbon extending far along the burn and sometimes to the shores of Loch Etchachan, as I found out to my delight on 20th June 2010. 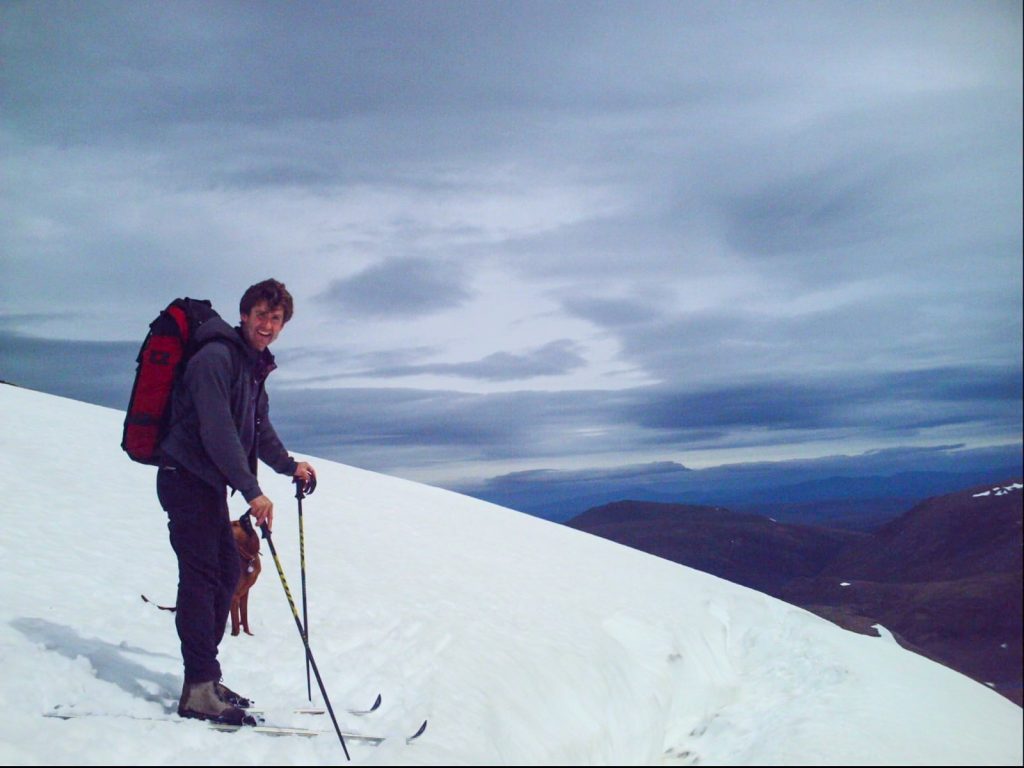 For a late ski trip you can ruthlessly prune your gear, omitting the bulky alloys and steel of winter; just remember to pack a spare tee-shirt, suncream and shades. Even better, take a bivvy or featherweight shelter for an overnight. That way you can rise fresh with the sun and reap a morning of firm snow and perhaps an afternoon siesta before an easy walk and freewheel down to your vehicle, the memory of night and day and the last ski of the season already seared and singing. 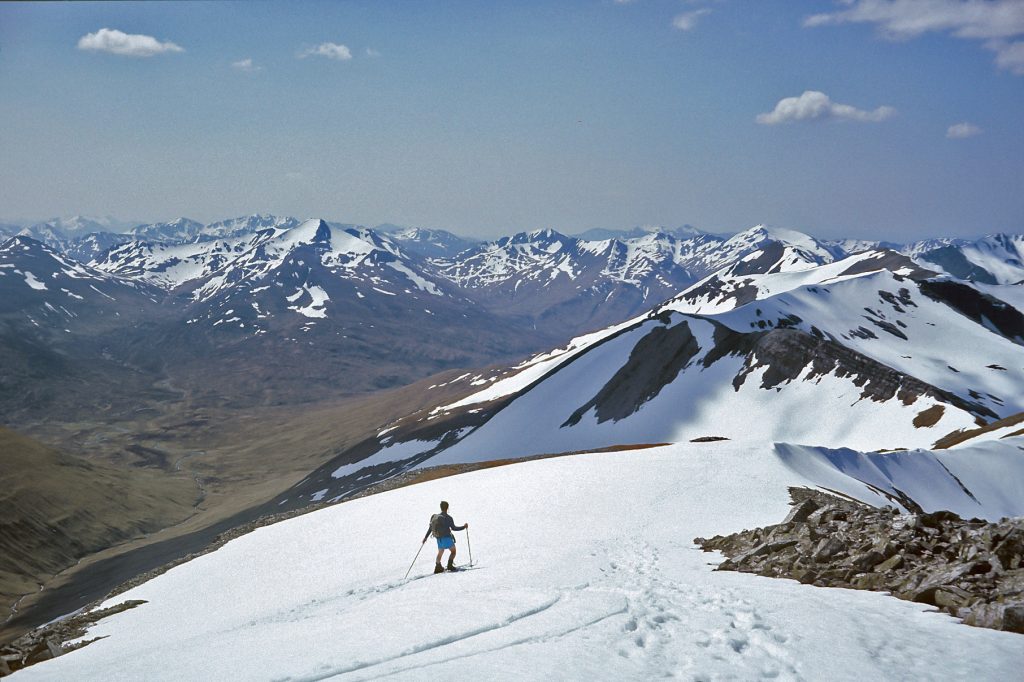 Conditions vary every year so whilst one year the east may have the longest lying and best snow conditions, the following year it could be the west. Hence inside knowledge, speaking to other club members and dipping into social media will all help to determine the best place to head to maximise the ratio of skiing to walking & cycling.

1.Beinn a’ Bhuird, Ben Avon. Easy-angled slopes or steep descents into Garbh Choire. Fairly long access by bike from Tomintoul. An alternative access is from Invercauld Bridge on the Braemar side where an 8 mile cycle takes you past the ruins Slugain lodge. In the right conditions perfect single track allows you to carry on in the saddle all the way to the south side of Carn Eas from where a short ski carry takes you up to the snow. Better still stay the night in the Slugain howff, that’s if you’re lucky enough to have been let into the secret of its location!

2. Braeriach – Einich Cairn. Two prominent ribbons of snow, the one farthest south known as the ‘Escalator’ provides a spring ascent and descent to and from the plateau. Access by bike via Gleann Eanaich from Whitewell or Colyumbridge. 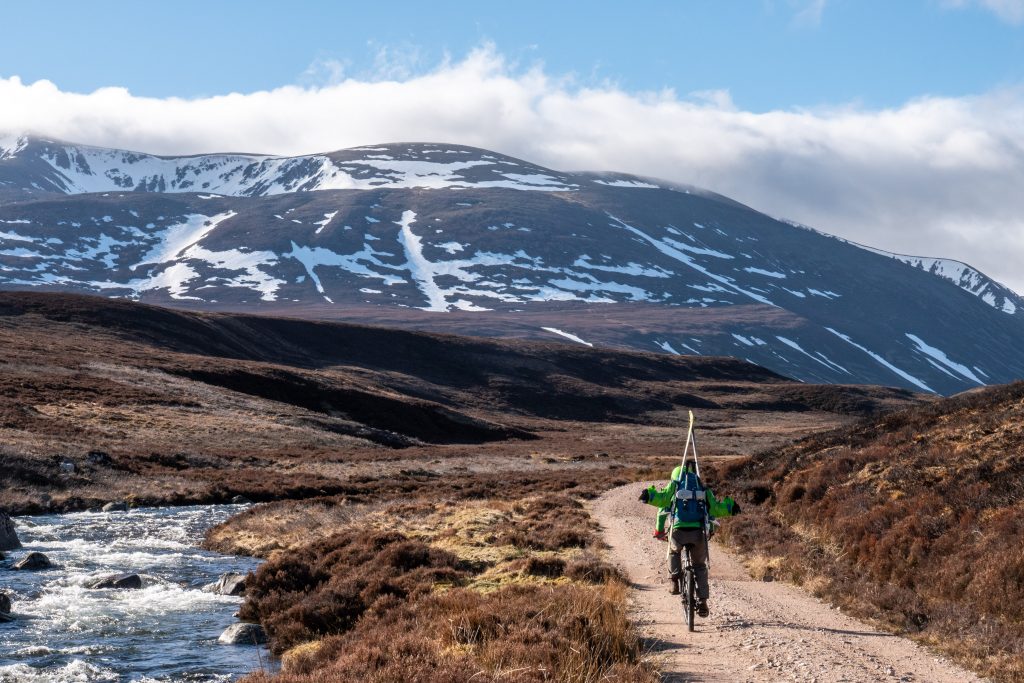 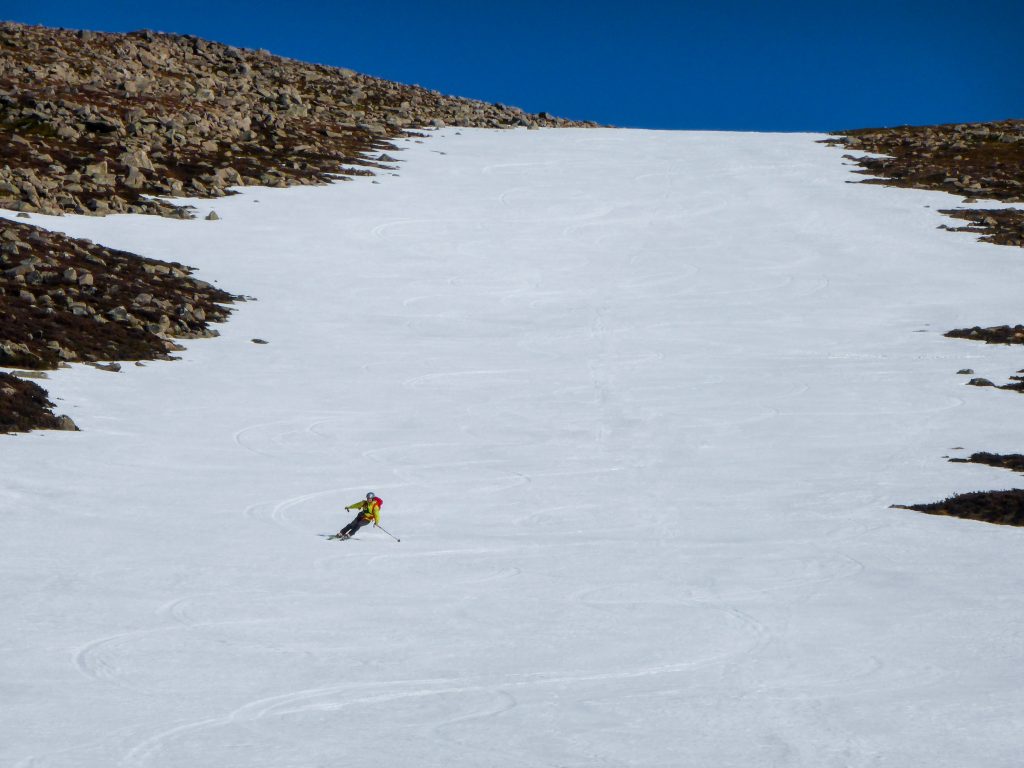 3.Geal-Charn (north of Ben Alder). The main descent follows the northeast facing burn to Loch an Sgoir. Fairly steep and can be narrow. Access from Dalwhinnie by bike.

4.Beinn Bhrotain, Monadh Mor. Remote hills south of The Devil’s Point and rising west of the Lairig Ghru. Access either from the Moine Mhor if snow-covered, or via bike from the Linn of Dee and White Bridge.

5. Mam Sodhail. Upper Coire Leachavie. Access via bike from Affric Lodge and the track along the north side of Loch Affric. 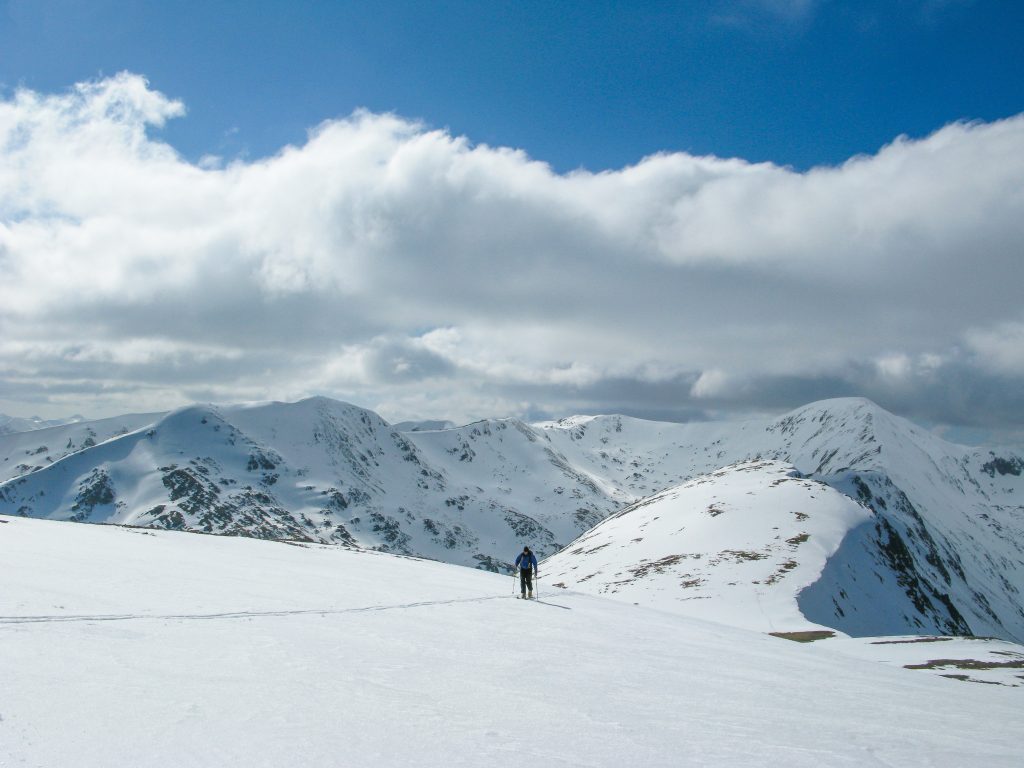 6.Aonach Beag. Wild and remote skiing in An Cul Choire. A fairly arduous approach using the gondola on Aonach Mor. Perhaps a more pleasing approach is a bike and hike from the north, following Allt Coire an Eoin.

7.Aonach Mor. Summit gully. Usually reliable until sometime in May, though often broken mid-descent. Fairly steep. Access using the gondola. An easier option are the north slopes of Stob Chul-Choire, a little east of Aonach Mor and with equally reliable snow. 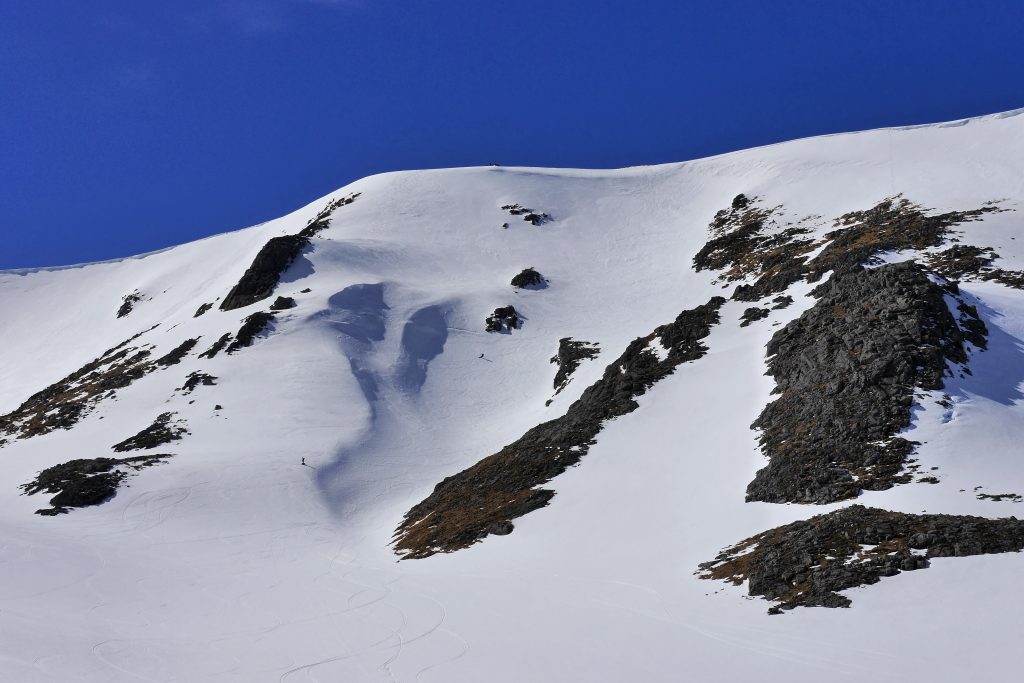 9.Ben Nevis. A classic ‘red’ run from the summit and down Red Burn on the western slopes, often to the 750 metre contour, even in May. A steep section can easily be avoided. Access via tourist path from Glen Nevis Youth Hostel. 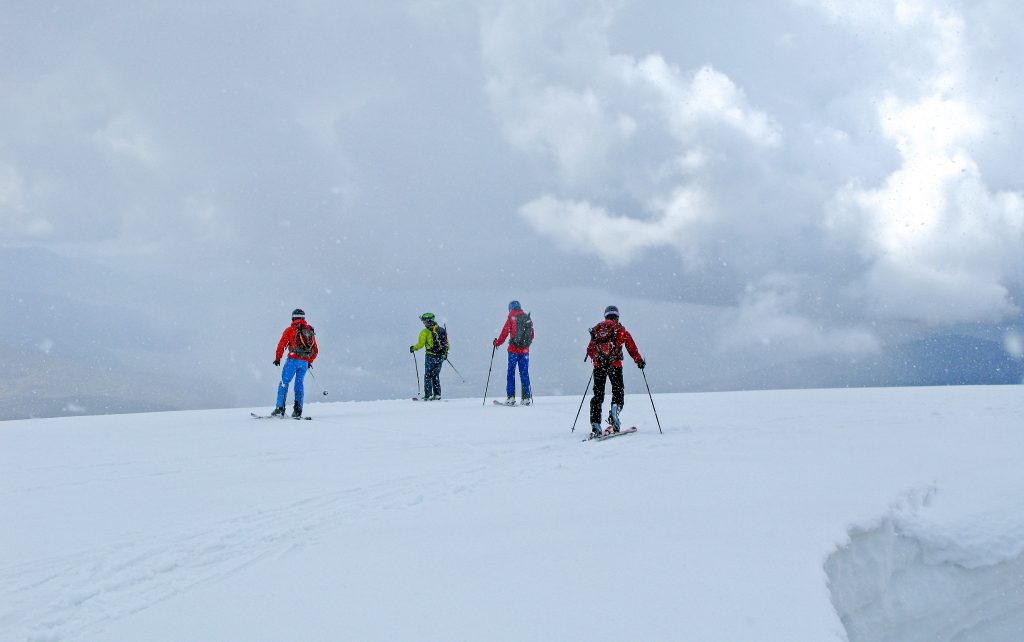 10. Ben Macdui. Garbh Uisge Mor boasts the most reliable and longest-lasting snow in Scotland outwith Ben Nevis gullies. Even in mid-summer there can be a kilometre or more of continuous skiing, with a good choice of lines from the plateau and steep. Access from the north via Fiacaill a’ Choire Chas and across the plateau. From the south by bike, leaving bikes a little way north of Derry Lodge then, depending on snow, a ski or ski carry to Loch Etchachan. 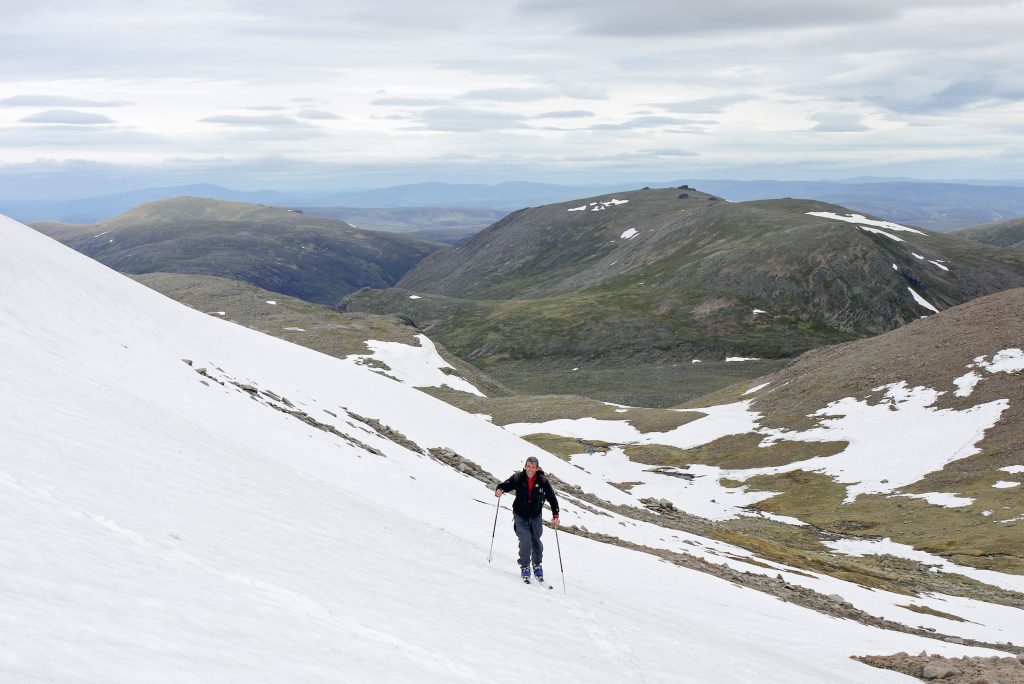