As is usual for the Loch Ossian Hostel weekend the forecast was grim, promising rain, sleet and high winds. Despite that twelve members, having travelled by road and rail, north and south, were found huddled in Loch Ossian’s cosy common room on the Friday night, already nursing glasses that were at least half full. 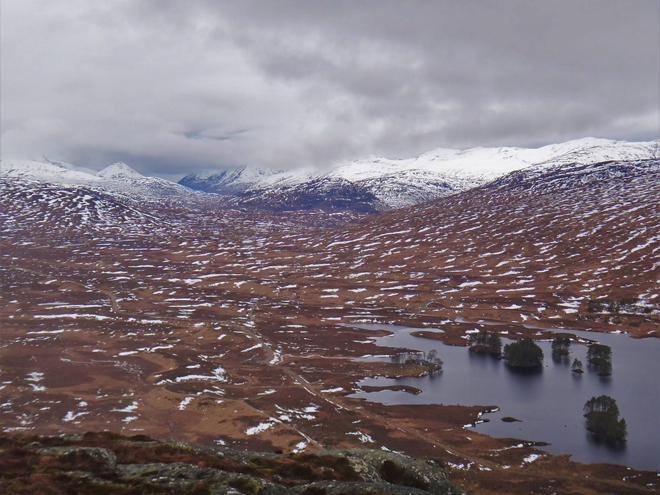 Jan and Monika’s wonderful Polish dish of bigos accompanied by various Vin de Pays and a few Tennents fuelled the residents and our lively and varied talk was punctuated by reverential readings of Donald’s well-thumbed copy of The Backpackers Handbook, by the legendary Derek Booth. The party dispersed around 2am. Outside wind rapped the window panes and rain dripped from the gutters. 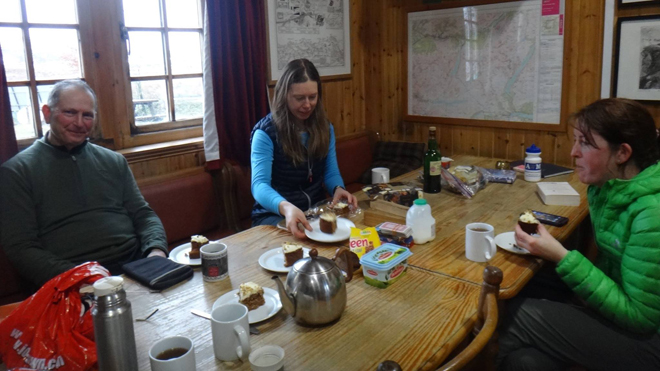 A wet morning and an enjoyable drawn-out breakfast gave much time for map-gazing and a decision was made to tackle Beinn na Lap which rises in a long sweep just north of the hostel. Close to midday the rain finally eased and all suitably wrapped and muffled ventured out to beat a path towards the snowline, skis like antennas and pummelled by the wind. At a snow-filled burn we applied skins then a steady ascent in the strengthening wind. Visibility was superb with grand views of a snowy Leum Uilleim and the sun-speckled expanse of Rannoch Moor. 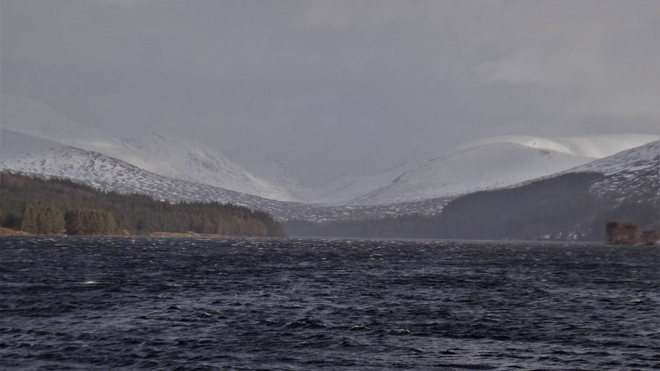 The long ridge leading to the summit proved to be very exposed and everyone gathered to discuss the next move. All seemed happy to push on, and maybe ski the more sheltered, though steep, east side. Coming in from the west the wind went up a notch until I for one was being shunted upslope. I led the way towards the summit cairn, now less than a hundred metres away. The wind was so strong now it was impossible to stand. Susan was close behind and we both sank to the ground for safely.We removed our skis and forced our way back, mostly by shuffling, until we saw the others and gestured with ski sticks, the message passed through the group to all gather at a place of marginally better shelter. 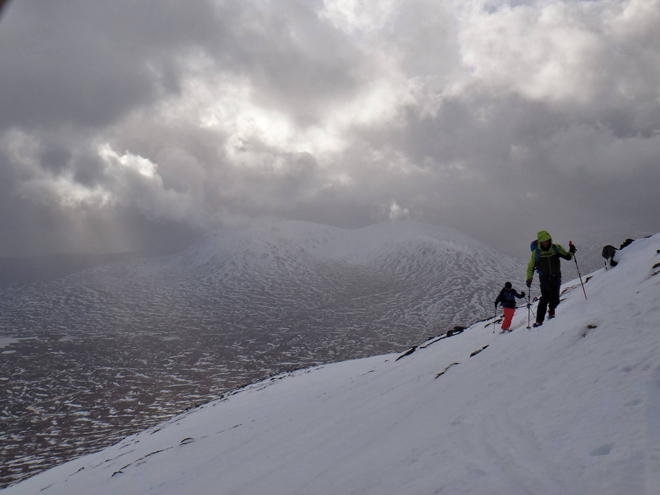 From here we skied to a level place a little below the crest, gathered again, then tackled the great snowfields on the southeast aspects, the wooded lochside below and fine snow-filled prospects of Ben Alder and Aonach Beag to the east. It is fair to say everyone was a little shaken by the severity of the conditions about the summit and in hindsight we should have perhaps turned back sooner. All though acted with resolve and awareness, and with our considerable combined experience we got safely off the crest. 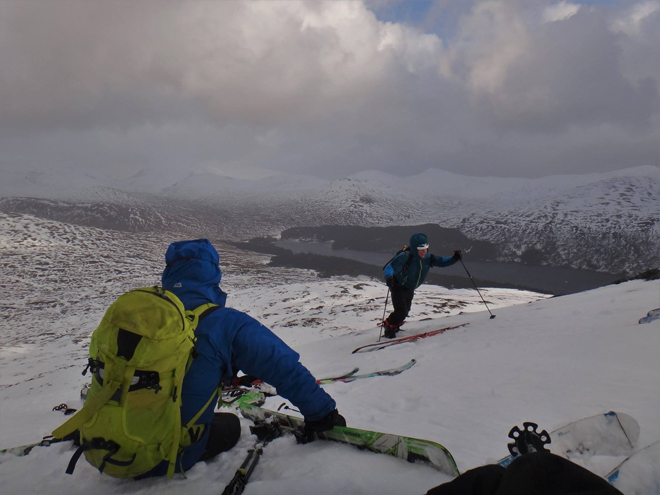 Below the general snowcover we ski-hopped from patch to patch and had a late lunch at the edge of a larch wood. The wind seemed to reach its full fury walking along the track and it bullied us back to the hostel in twos and threes, and there we shed our wet gear and drunk tea and mulled over the day’s events, all wiser, all with a tale to tell. Jan and Monika produced a delicious meal and a desert to replace lost sugars. The promised Loch Ossian battering had been duly served. With more of the same forecast for Sunday some opted for the late evening train and home to bed by midnight. 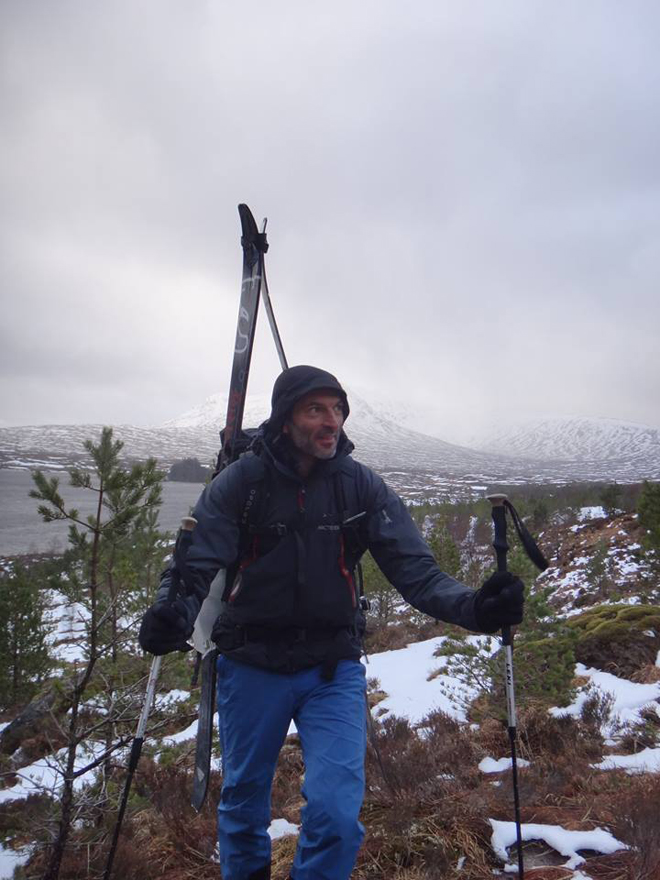 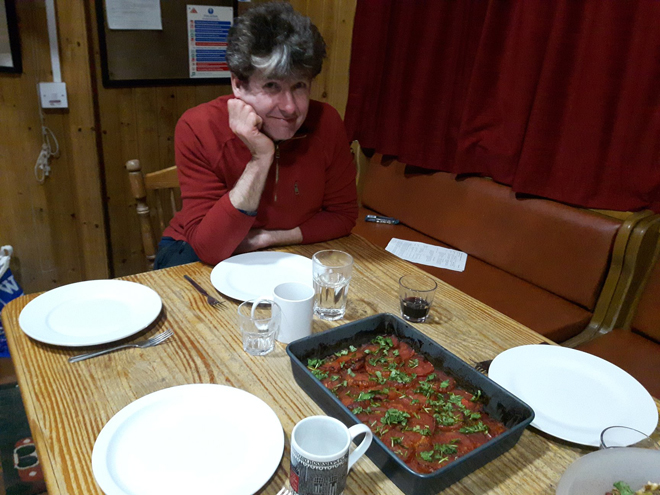