A suspicious forecast which varied between a storming Friday followed by 2 days of blizzards and “snow down to glen level” had ramped up the weekend enthusiasm level to a point where 5 sets of skis accompanied Susan, Al & I on the long drive up the A9 to Achnasheen to join the rest of the weekends gathering. The first warning signs of a rapidly diminishing snow pack greeted us at Drumochter and from there on the white stuff became ever harder to spot hiding behind torrential rain and low cloud. Thoughts of lovely fluffy powder and touring from the hut were quickly replaced by fears about flooding.

Inver croft, the brilliant mountaineering hut operated by the Jacobites club of Edinburgh, is located on the other side of a wide flood plain lying between two lochs which in high water become one occasionally cutting off access to the hut.  On arrival a quick look down at the river bridge confirmed the 200m raised walkway on the other side was still clear of flooding so no problem we thought. An exciting time was then had fighting our way forward in 50 mph side winds which kept threatening to blow us into the water. We finally got the hut opened up, fire on, ferried everything else across and waited for the rest of the Friday night team to arrive. The real fun then started as various members arrived to find winds strong enough to blow them over into a rapidly rising and widening river. Sheena and Sonya both had an early bath whilst a chivalrous Al Todd jumped in and saved the wheelbarrow when he saw that Sonya’s leg was deep enough in the bog to stop her floating off. A combination of torrential rain and some involuntary swimming saw a damp group of 8 huddling up to the fire in improvised clothing for the remainder of the evening whilst hoping for the sudden forecasted change in weather to blizzards.

Saturday morning and a long lie as the beating rain on the roof confirmed it was to be a no skiing day. A leisurely breakfast and various plans were hatched involving Karen and Adam going for a run whilst Sonya, Susan, Andy and the two Al’s opted for a wet walk to visit the brilliantly located Coulags bothy, Sheena seeing the skiing was on hold opted for the sensible option and headed back to Inverness.

Heading in to Coulags bothy 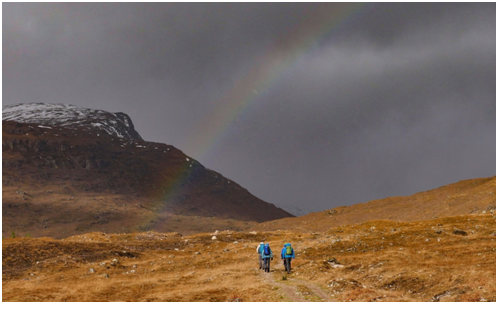 A welcome sight through the sheets of rain 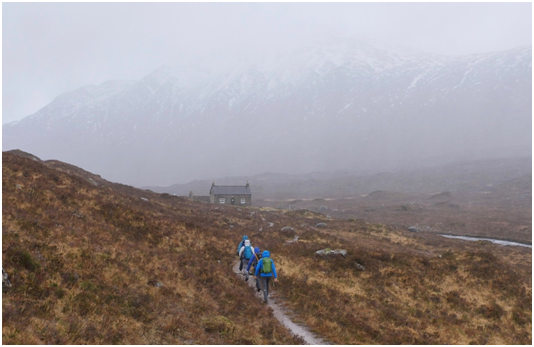 skis and shot off. Meanwhile Adam was inspecting Torridon to get visuals on snow conditions whilst Karen not content with a big run and having been inspired by Sonya and Sheena’s involuntary swim, went for a pre planned dip in Loch Gowan. That evening reinforcements in the form of Simon and Andrew re stoked the enthusiasm levels and after much good food, a mini ceilidh comprising Susan on accordion, Simon on guitar and Adam on spoon and glasses entertained all in front of a furnace like fire.

Susan proving there is always a turn to be had 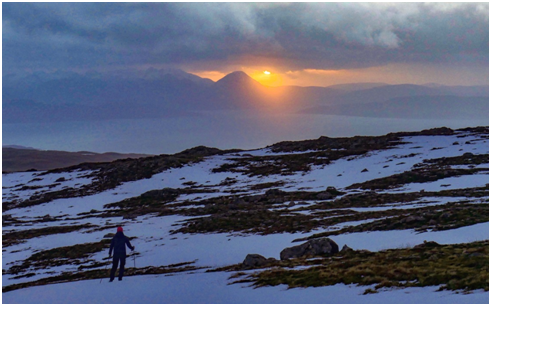 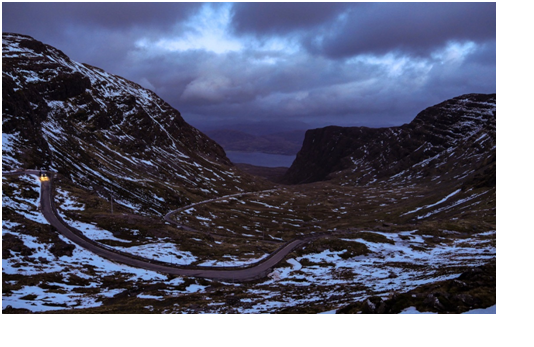 Sunday dawned bright, frosty with no sign of the prolonged snowfall which had been forecast even as late as Saturday evening. With stunning views and obviously good snow cover remaining above 600m, quick packing and tidying saw everyone at the Beinn Eighe car park for a reasonably sharp 10am start. 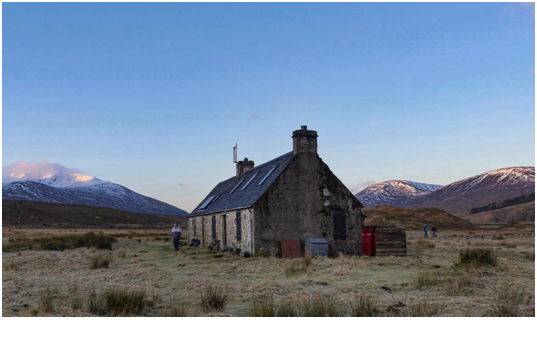 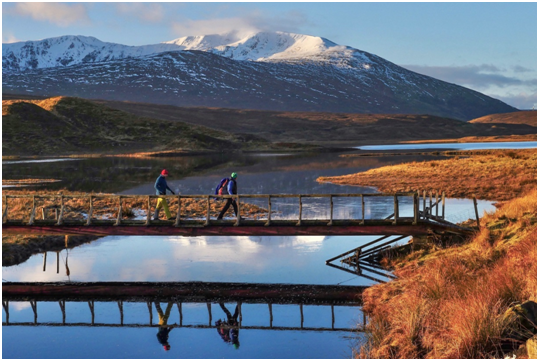 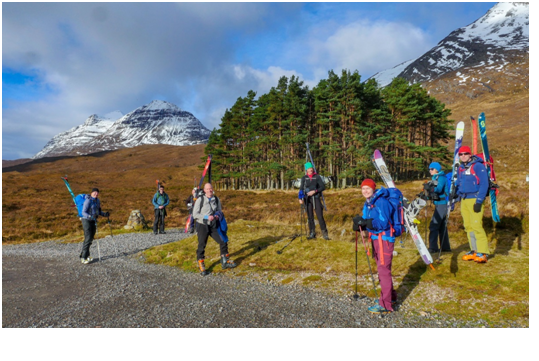 Ski’s were carried up the excellent path into Coire an Laoigh until at 460m sufficient snow allowed us to start skinning up. 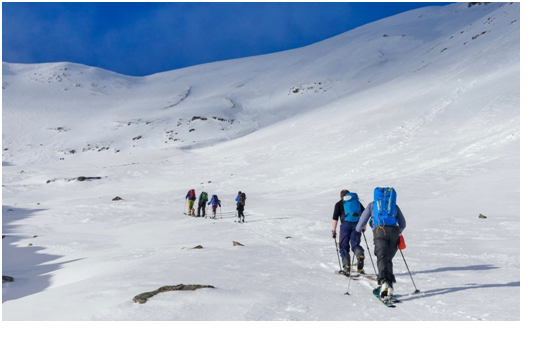 Conditions underfoot varied from a (small) amount of windblown powder to surface ice and in places spring snow pack whilst overhead glorious sunny conditions kept the enthusiasm levels up until eventually the steepening ground allied to increasingly icy conditions underfoot led to a rethink by several of the party. 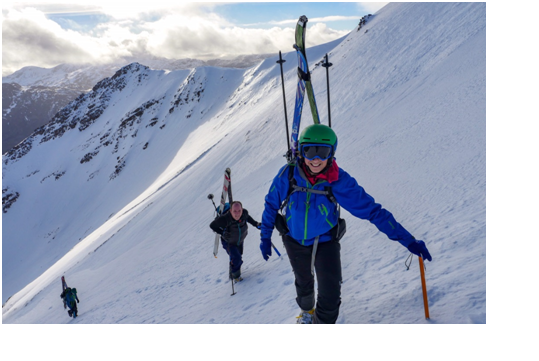 A smaller group including the two Al’s, Susan, Simon & Andy then boot packed to the subsidiary top of Spidean Coire nan Clach where stunning views across the Torridon giants of Beinn Eighe, Liathach, Beinn Alligin as well as the Fisherfield and Strathcarron peaks were enjoyed. 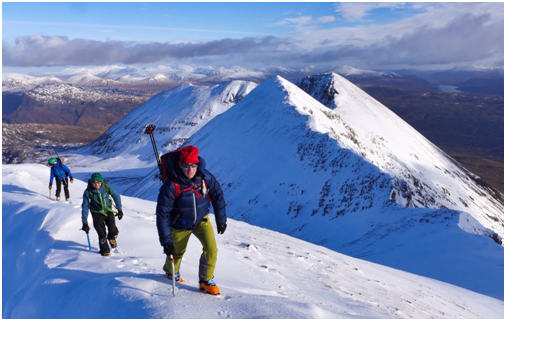 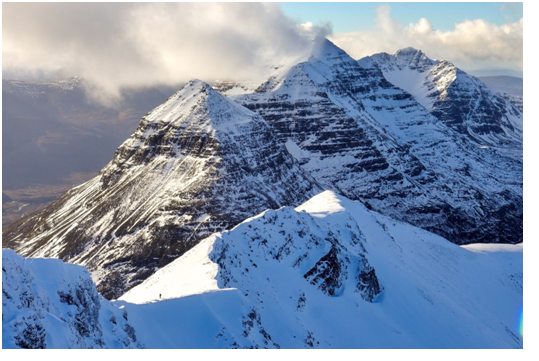 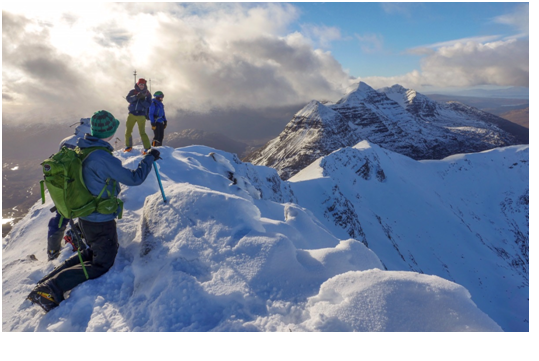 The descent? Undoubtedly a classic skiers line and on the day it comprised over 500m of vertical on continuous snow including some packed powder and lots of surface ice where good edges were vital. A temporarily marooned skier was recovered from his tiny rock perch whilst lower down some rock dodging took us back to the start point. Big grins remained however since it was one of those rare winter mountaineering days where the exceptional views combined with the weather more than compensated for the less than perfect underfoot ski conditions. 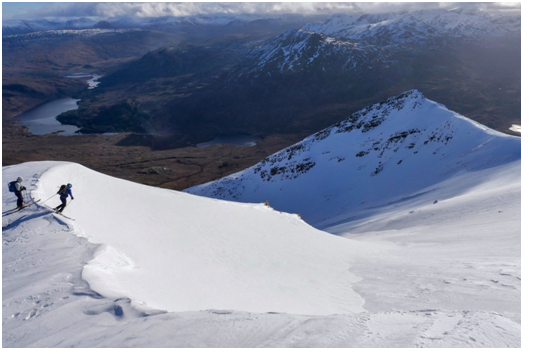 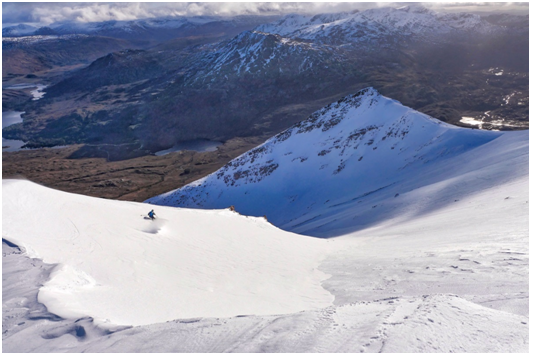 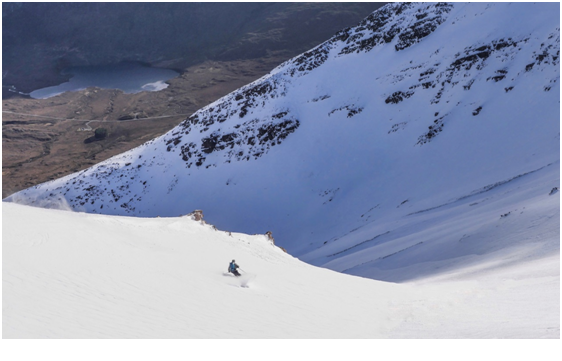 So now the waiting begins again with a grim weather forecast this week so let’s hope for a late winter snowier March!