By Donald Morris. As is the norm for the last weekend in January, storms and severe weather preceded and dominated the forecast. In 2014 we had trouble standing up on Beinn na Lap. In 2015 we battled the hurricane force winds on Leum Uilleim so we were hoping for more of the same in 2016.

We gathered the bits and pieces at Spean Bridge and an advance party departed with wine boxes, ski equipment and lots of food. Despite ski touring being relatively popular in Scotland we still attracted some strange looks from fellow passengers. No doubt the absence of snow and huge thaw just before the trip made them wonder if we had looked at the forecast. We had and saw that it promised snow. Fortune favours the brave and we intended to shuck off our tiredness and ride the wheel of freedom. 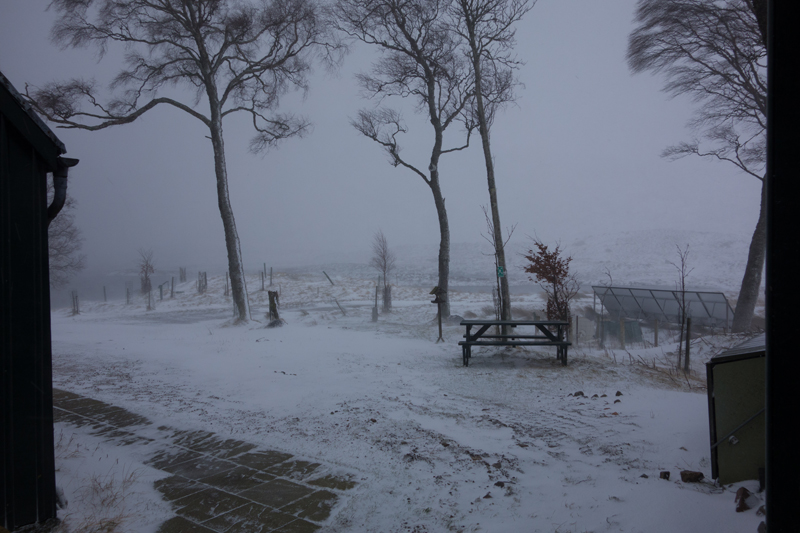 When we arrived at Corrour there was no snow in sight but given that it was dark this wasn’t too surprising. A 20 minute walk saw us arrive at the excellent Loch Ossian Youth Hostel which is run by Jan. It’s worth pointing our how good Loch Ossian is for skiing; there are various good ski hills nearby, it’s at about 390 metres above sea level and often has good snow. The hills are not too rocky and the accommodation basic and cosy.  This hostel and Glen Affric are the SYHA’s two main mountain hut type hostels and are a welcome contrast to the more urban establishments. This was the second hostel opened by the SYHA (the first being Càrn Dearg near Gairloch) and has a lot of history attached to it. It used to be the waiting room for guests of the original Corrour Lodge who would be taken by boat to the east end of the loch. It’s imperative that hostels such as these are maintained and used. 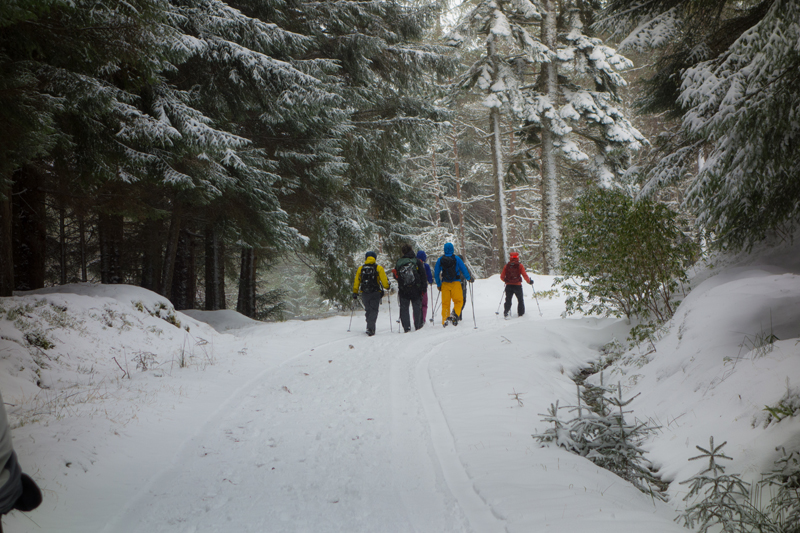 Saturday morning dawned wild and windy with lots of snow blowing about. Not a day for the hill at all so we walked around Loch Ossian and past the new modern looking lodge which was built using money earned from cardboard packaging. Had we had track skis the day would have been even better as the snow was perfect for kicking and gliding along nice tracks but the walk was still excellent. 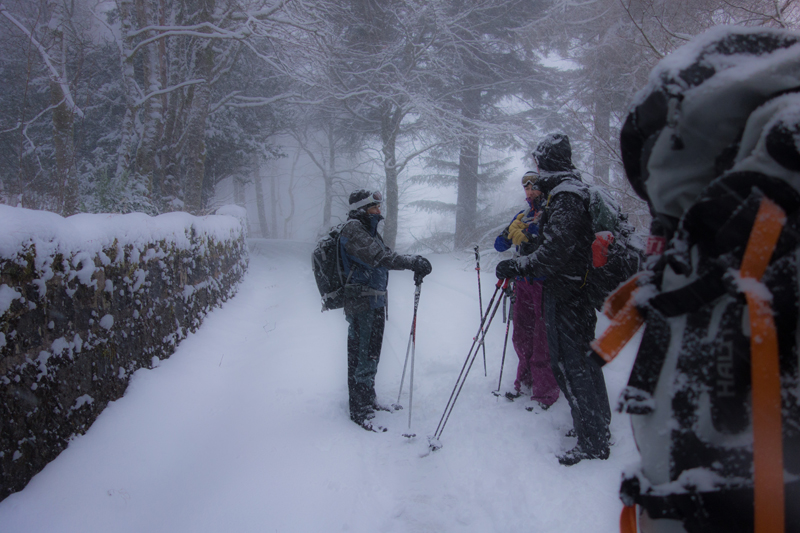 Meanwhile the Club President made himself known over the radios. Unfortunately he had a tyre blowout on the journey to the train station and was delayed in arriving at the station. His arrival saw an attempt on the awesome peak of Meall na Lice (Hill of the slab) which we knew held snow on its east facing side. The rest of the party stayed in the hostel to keep the wine and whisky company. 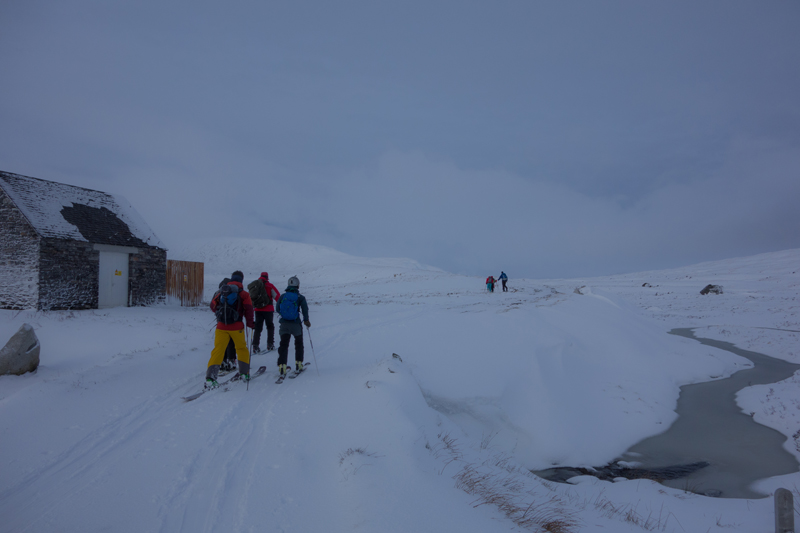 Calum Munro and Mike Cawthorne must receive special thanks as they cooked and catered for us during the weekend. Calum wasn’t even there but his chilli was tasty and provided a good basis for 1 litre of Echo Falls (a red wine). 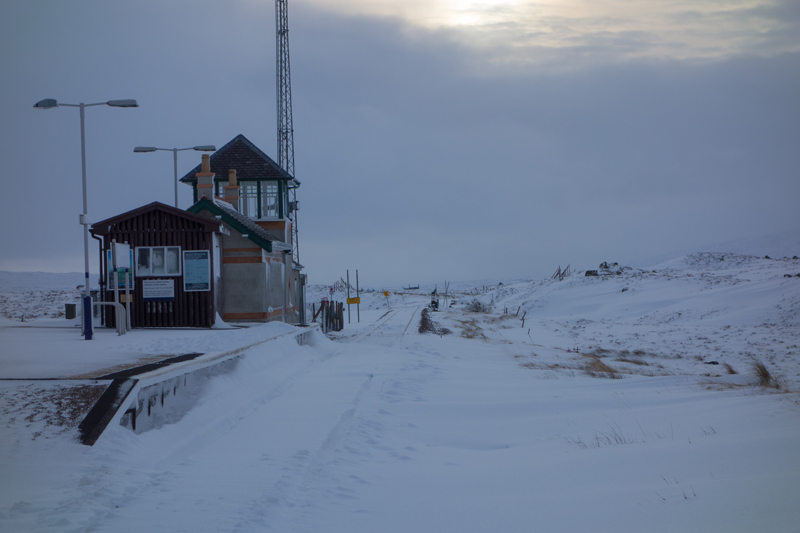 Leum Uilliem, that tempter of skiers, that featured and beautiful hill and one that had repelled IBSC on previous attempts just like Cerro Torre and Gasherbrum IV had their respective ascentionists. Yes! It let us approach to the bottom of Sròn an Lagain Ghairbh and up the nose itself. We are getting to know the terrain of this special hill quite well now. The verdict is positive – the hill provides excellent ski terrain for all standards and gets better the closer you are to the hill. 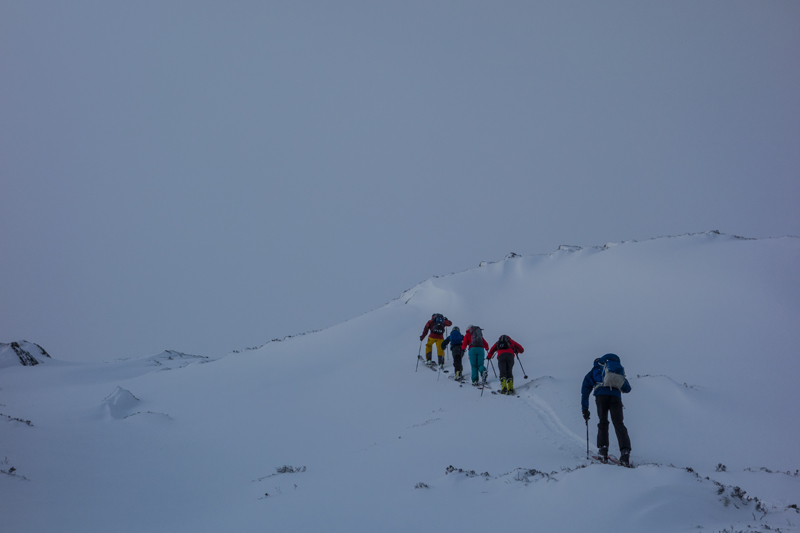 Various parties went their separate ways; one into Coire a’ Bhric Bhig, onto the ridge of Tom an Eoin and the other straight onto the ridge to the summit with the attention of traversing to the north. We were allowed to attain the summit on this occasion and onwards to the bealach betwenn Leum Uilleim and Beinn a’ Bhric. 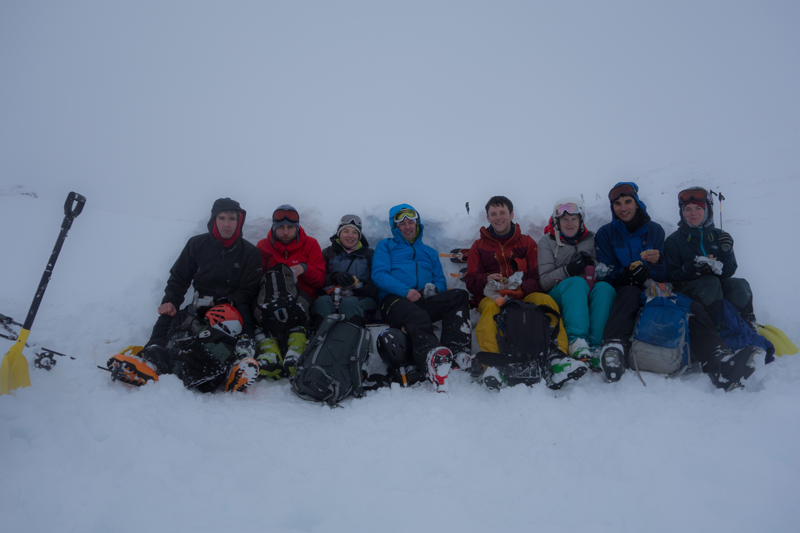 At the bealach we built a luxurious lunch bench to rest the juices and allow the bubble belly to settle. Don’t go jumping down from snow benches though as this is just the sort of thing that causes the veins to become engorged. 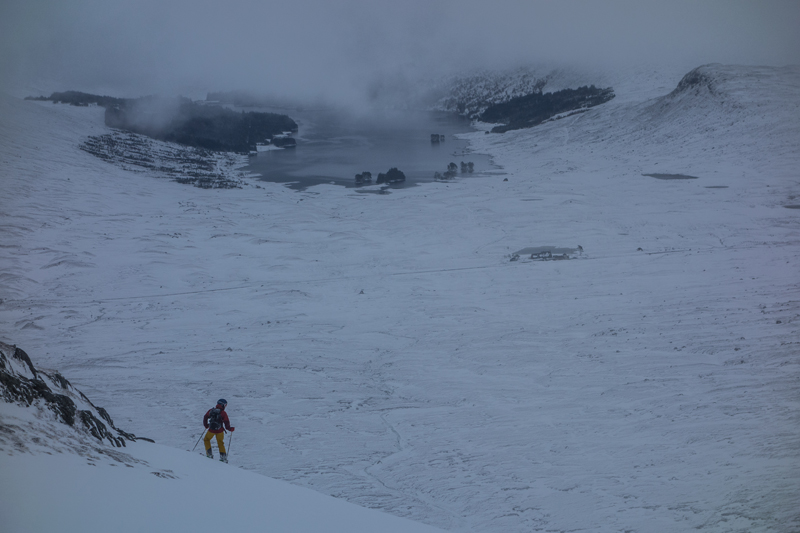 Unfortunately a navigational error saw us descend slightly west of where we wanted to be meaning we had the bonus of a short ascent of the ridge. The ridge to Tom an Eoin is very easy angled and not that exciting to ski but does provide excellent views to the east and the bowl where Loch Ossian is. We descended the slopes to the heathery corrie floor and debated what to do. 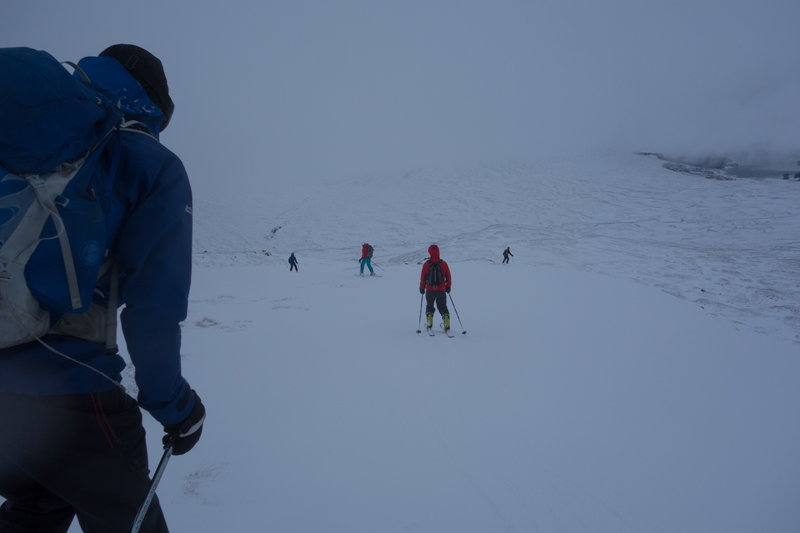 One party had returned to the hostel after a few first descents and excellent skiing in the coire. Another decided to re-ascend Leum Uilleim to take advantage of the excellent ski terrain and snow on the east side. It was worth it. We skied down excellent gullies and all thoughts of our spoor and scratching it were forgotten and replaced by the wheel of freedom. 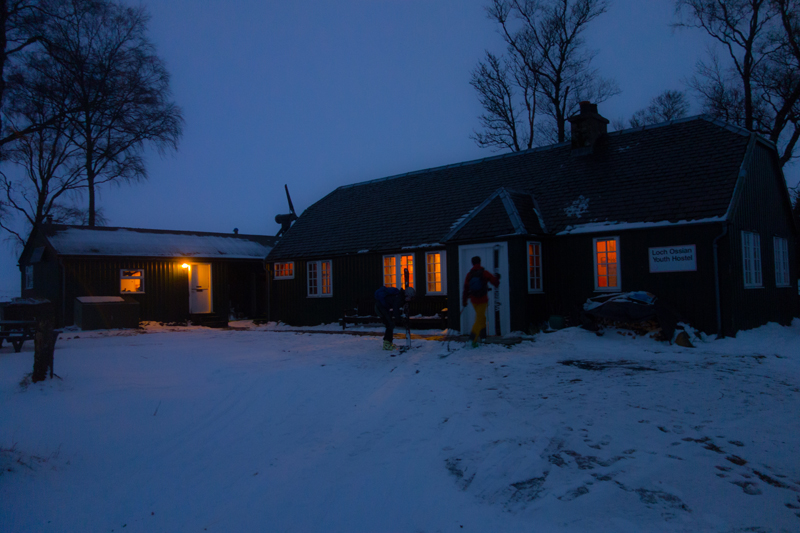 Returning to the hostel as it got dark was satisfying – it had been a full day on the hill with excellent skiing. Well worth the effort. We tidied up the hostel and skied back to the station, travelling full draught and laden with everything we had brought with us. It wasn’t lightweight at all.

Jan, the hostel warden, had decided to sit out the severe weather forecast for the next day, near Fort William and we all missed this special place the second we left it. 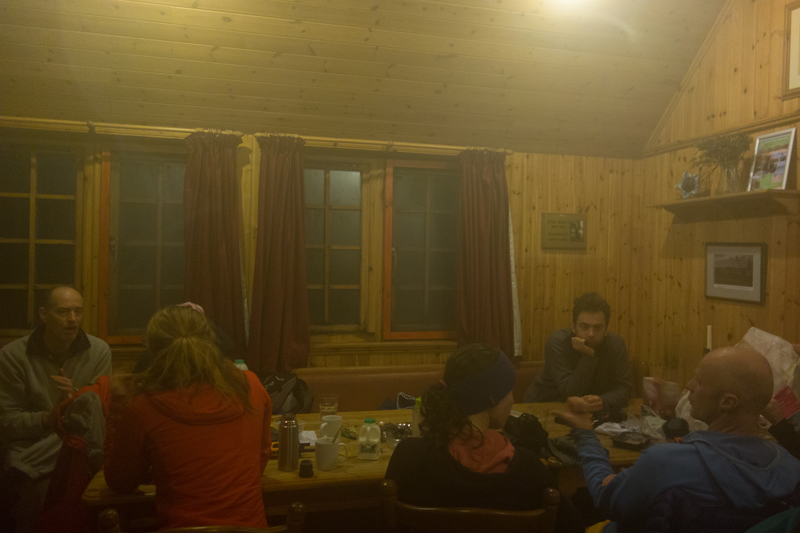 Scotrail are to be commended for running their services to time and dealing with the severe weather. Again we attracted some funny looks on the train as we boarded with a tonne of gear and big smiles. 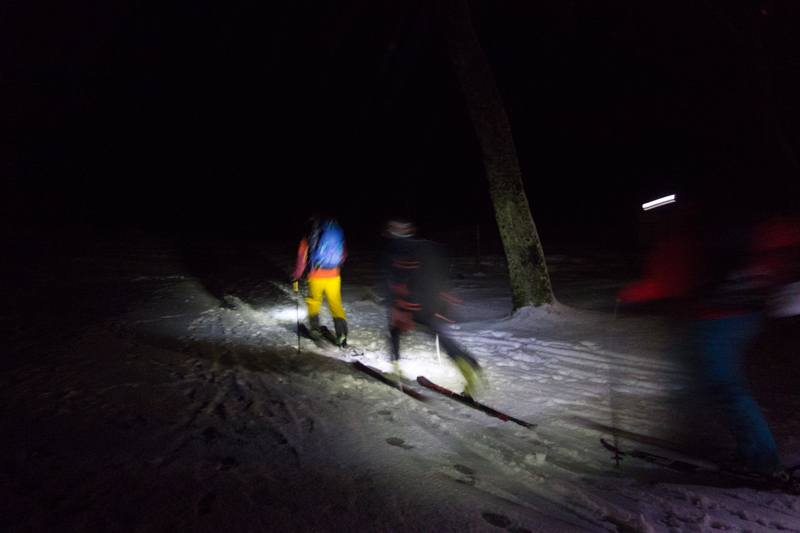