Fence Posts for poles: Stretching the legs on Cairngorm

Home→News, Previous Trips→Fence Posts for poles: Stretching the legs on Cairngorm
Previous Next

Fence Posts for poles: Stretching the legs on Cairngorm

Six club members set off from the base station with a rough plan of skiing up the day lodge piste and then hanging a right following the M2 up to the Ptarmigan Station, from there a the plan would be firmed up over snacks, transition and some shelter from the wind.

Conditions were great under foot thanks to fences collecting the wind blown snow and progress was good, that was until our telemark skier, who will remain nameless, had a kit malfunction, but to be fair to Mark these were brand new skins, so in a no blame culture, Black Diamond were to be blamed (note this is the opinion of the author and not the club, should an eagle eyed BD lawyer be reading!). After a few attempts to resolve the skins malfunction Mark opted to boot pack to the station and the rest of us pressed on. 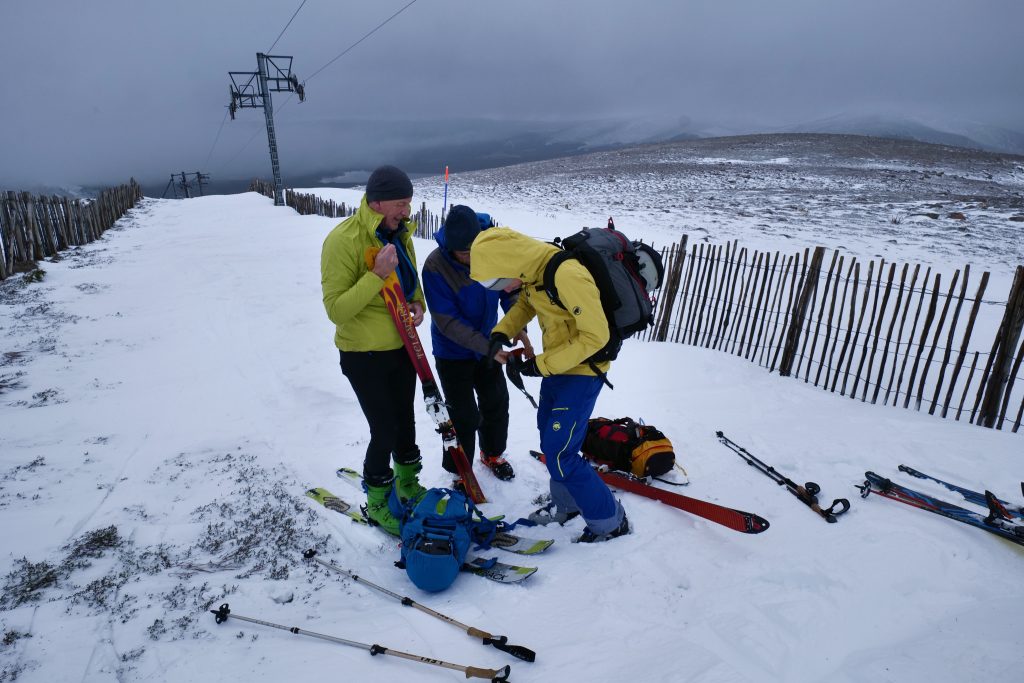 Now there were five. 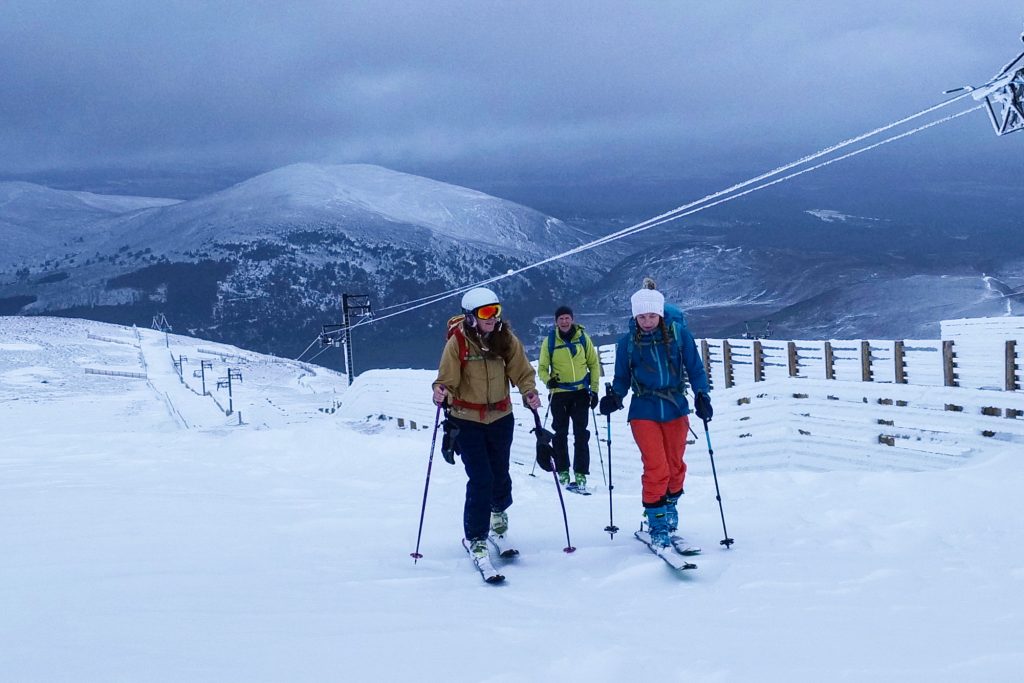 Upon reaching the station Al presented some options which we discussed whilst transitioning and fuelling up. Out of the options we opted to descend the Ciste Gully, which after 50-60 meters we aborted and decided to skin back up to the top of the Ptarmigan T-Bar, the conditions were ‘workable’ but underneath a few inches of soft snow was a boiler plate surface which provided plenty of challenge for my first turns of the season, nothing like the sound of ice to remind you of your edges.

To be fair, I was quietly happy for more time on the up, rather than the down, at this stage as my touring ability often outstrips my ability to descend. 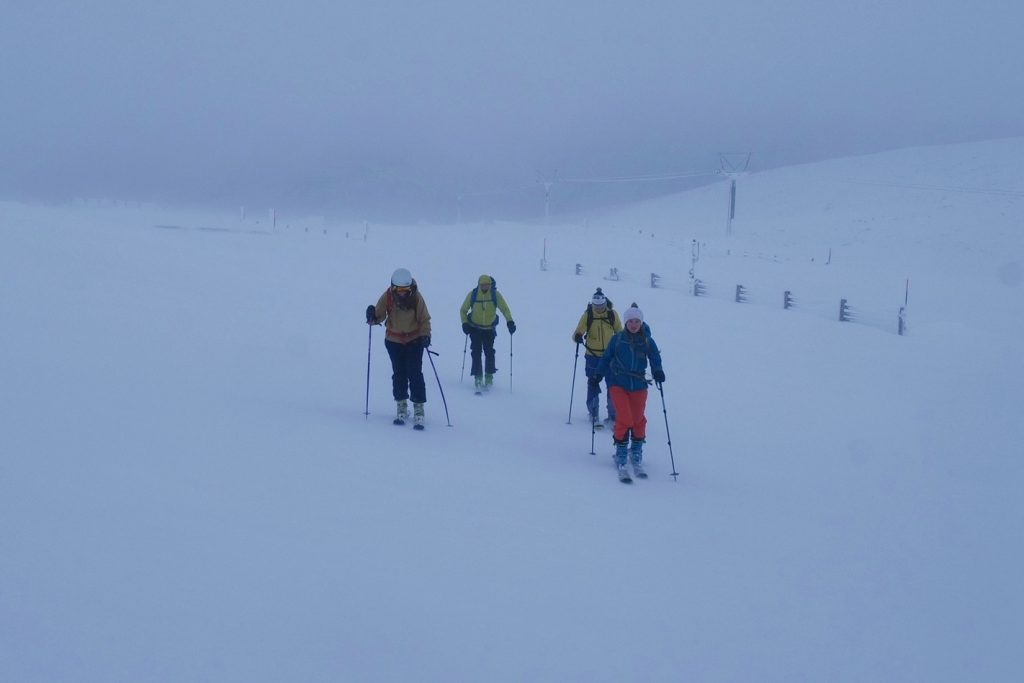 Once at the top of the T-Bar we traversed East towards Ciste Mhearad for the more for welcoming slope, the visibility was pretty poor at this stage and it here that we dropped a team member, who opted to return via his own route, such is the freedom, luxury and raison d’être of the club, if you don’t feel comfortable, don’t proceed!

Now there were four. 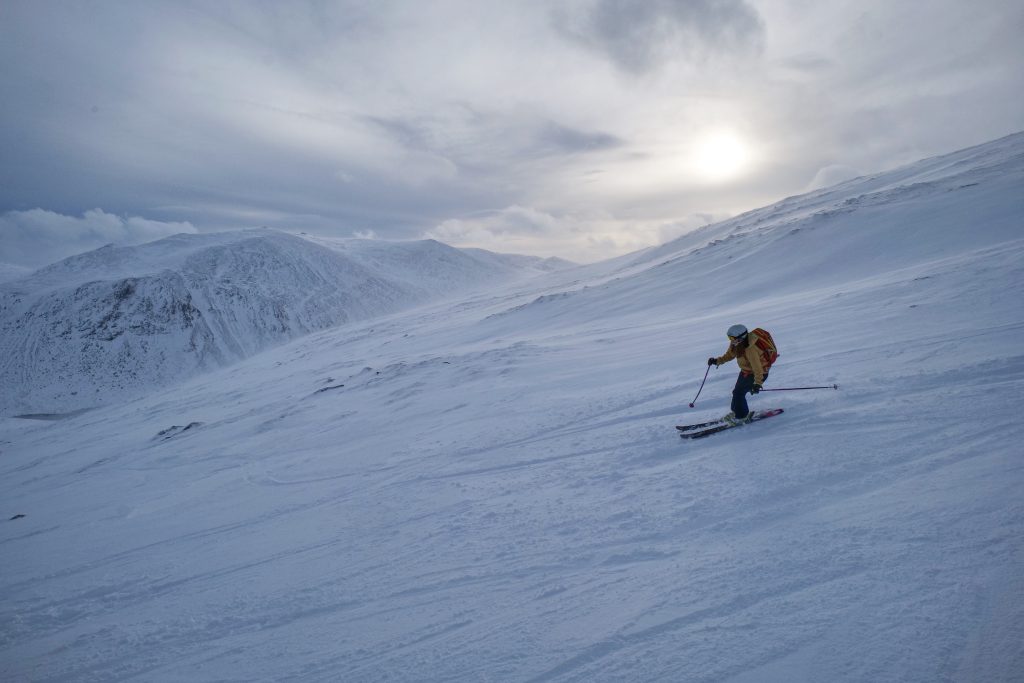 For those four the conditions improved vastly, a silver lining from a pin binding faff on my part! The snow was soft and the visibility was clear, which provided a great, albeit short, descent down towards Strath Nethy. At this point we found some shelter, snacked and transitioned ready for the last skin of the day – the plan was to return to the top station and back to the day lodge via Traverse, 105 and Zig zags. 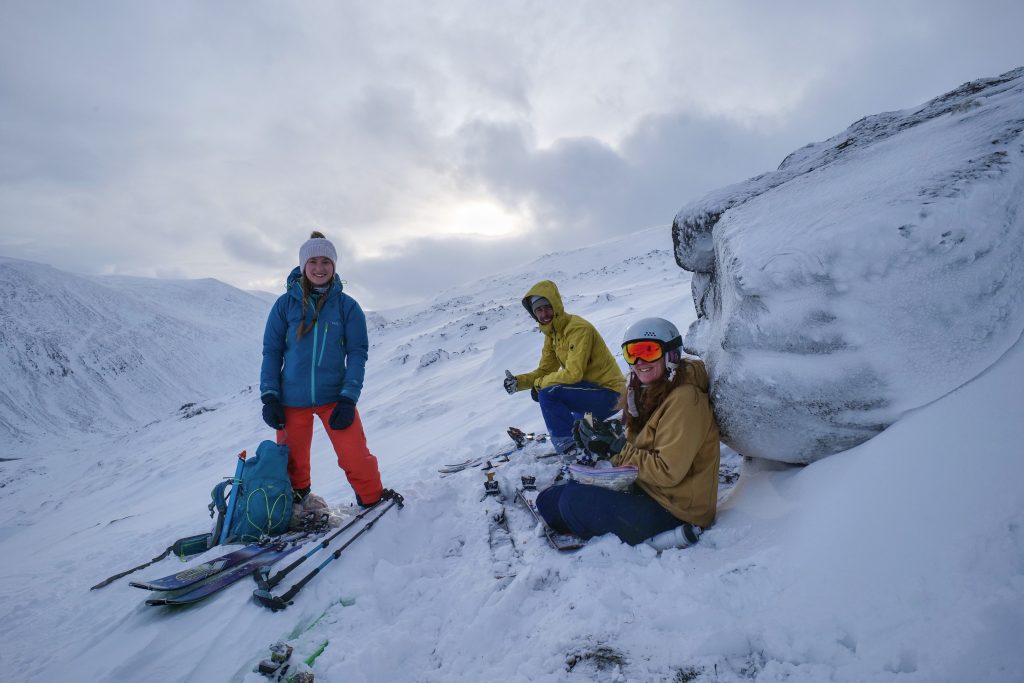 At this point my ridged, leaning back, ‘fear’ skiing technique had me exhausted, and I was looking forward to getting off my skis, out of my boots and back to the fire.

Throughout the trip we were treated to some amazing light which offered up some classic Scottish winter vistas, we were also treated to grey skies and snow showers, but this is the joys of skiing in Scotland.

Three ups, three transitions and three runs – all in all a good day and a great first trip with the club for Helen, Lisa, Mark, Malcolm and myself.

As for the fence posts for poles… a well known guide, helping a client who had arrived without poles, improvised. A useful lesson learnt! 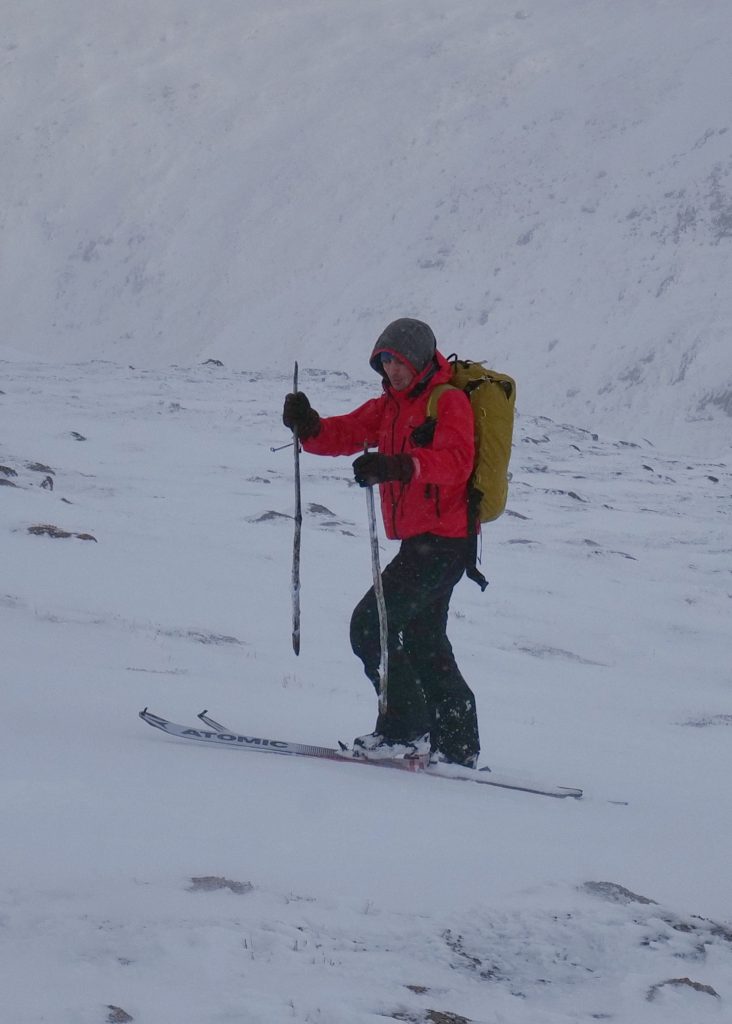