The Moy Wall of Creag Meagaidh

The Moy Wall of Creag Meagaidh

As we parked up near Loch Laggan, we were excited to see clear summits all around and a pink tinge to the sunrise & were hopeful that the forecast of extensive cloud on the summits and showers throughout the day might be wrong, but even as we introduced ourselves to one another, a cheeky blanket of grey cloud crept in from the SW threatening to turn the day into a trip into the whiteroom! 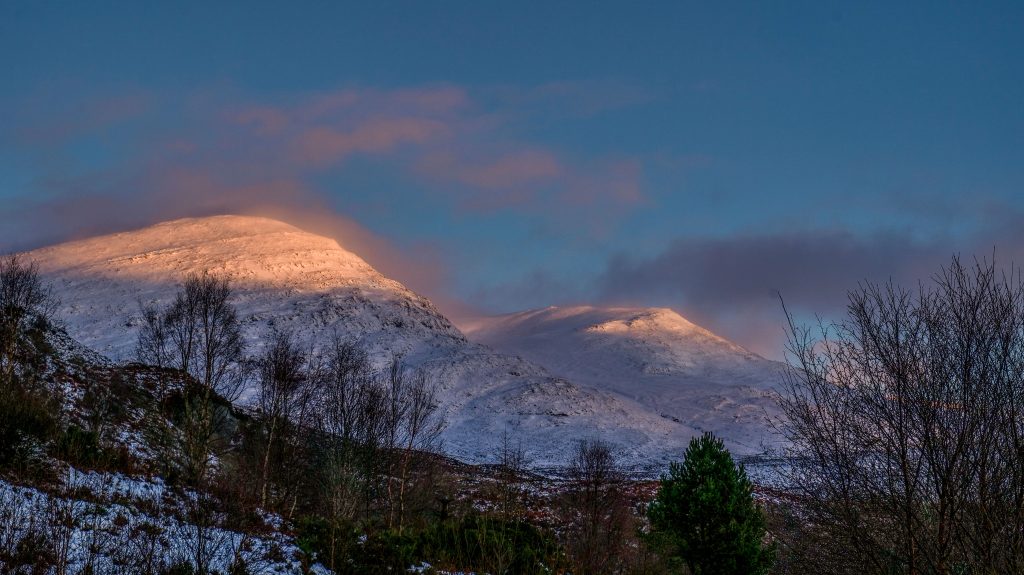 We ignored this and set off on the first leg of our journey which was a steep clamber uphill through heather and ferns with our skis on our rucksacks. Once some height was gained we were able to put our skis on and skin up through the heather aiming directly for the west side of Creag na Cailliche, the small hill which stood between us and Creag Meagaidh. From the top of the ridge we had an easy slip and slide downhill into a conveniently snowy and just about frozen heathery bog which took us to the Moy wall reached 30 mins after leaving the cars. 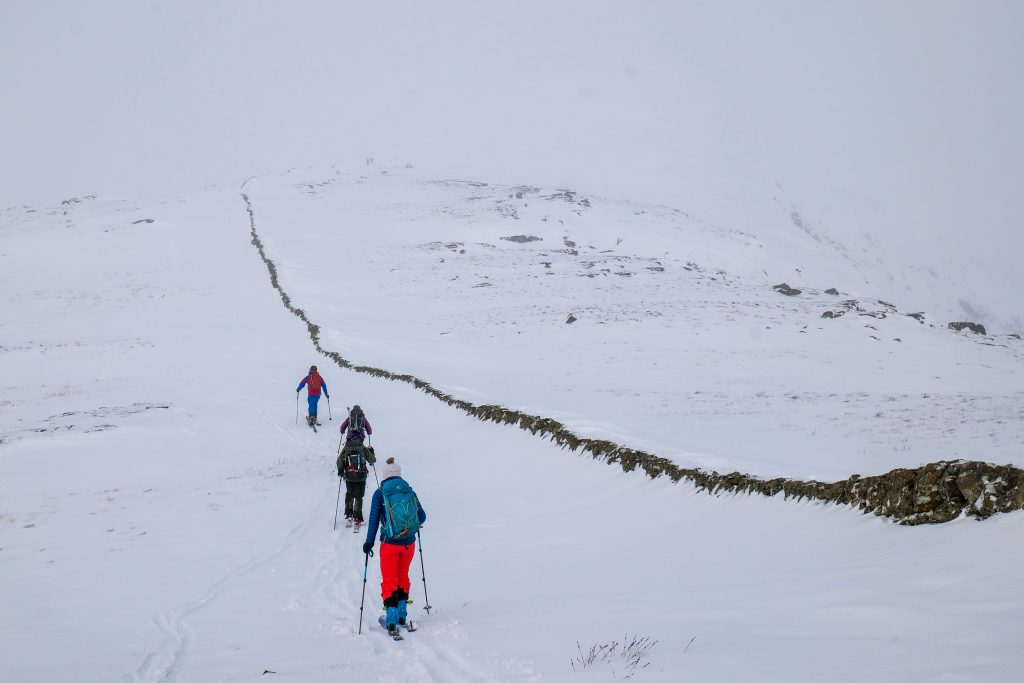 The Moy wall is a remarkable feature built in 1770 it forms the ancient boundary between Lochaber & Badenoch & for skiers it conveniently cross loads snow on both east & west sides forming a perfect piste stretching high up onto the mountain with easy navigation towards the summit. As we ascended into the cloud which now sat firmly over the mountain it was easy navigation with the wall reassuringly protecting us from the steep easterly slopes & cliffs that dropped into Moy corrie. Snowing lightly but with no wind, conditions for uphill progress were excellent. 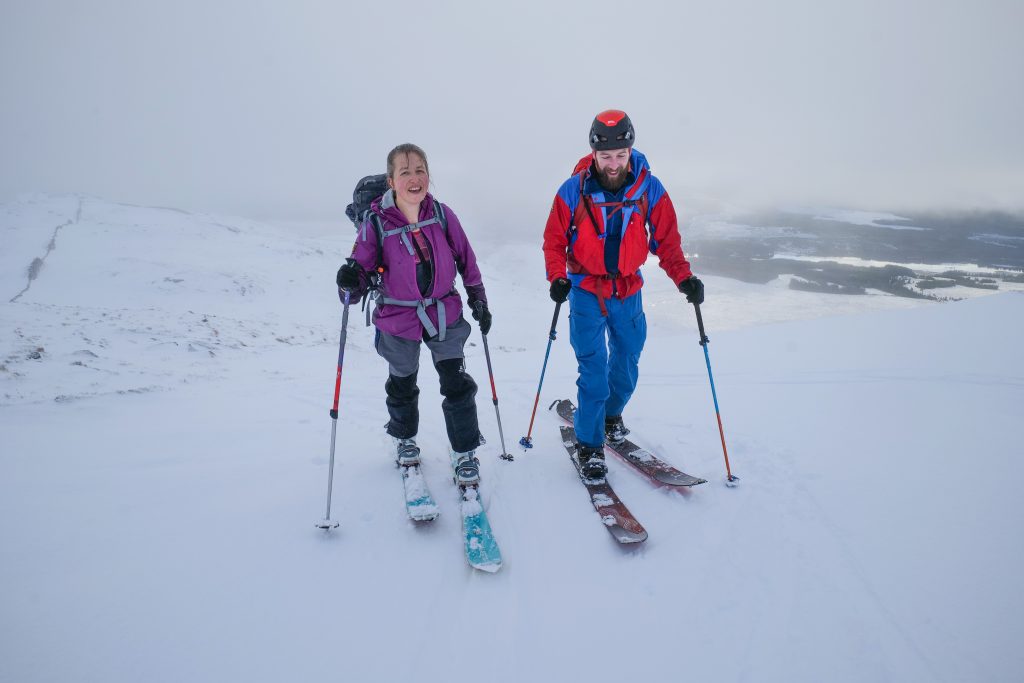 Coincidentally we bumped into friends who on ski had taken the easterly approach to the wall with little or no advantage to our more direct approach from the west. We briefly joined forces & carried on up impressed with the enthusiasm & determination of one of the party who was wading through the now deep snow in downhill boots with her brother carrying her alpine skis!

As the angle of the slope eased a little higher up on the ridge, we started to notice a tinge of blue sky above us, and the sun started to shine through the blanket of cloud. Bursts of sunlight appeared down in the glen lighting up lochs and patches of hillside as the cloud moved around. 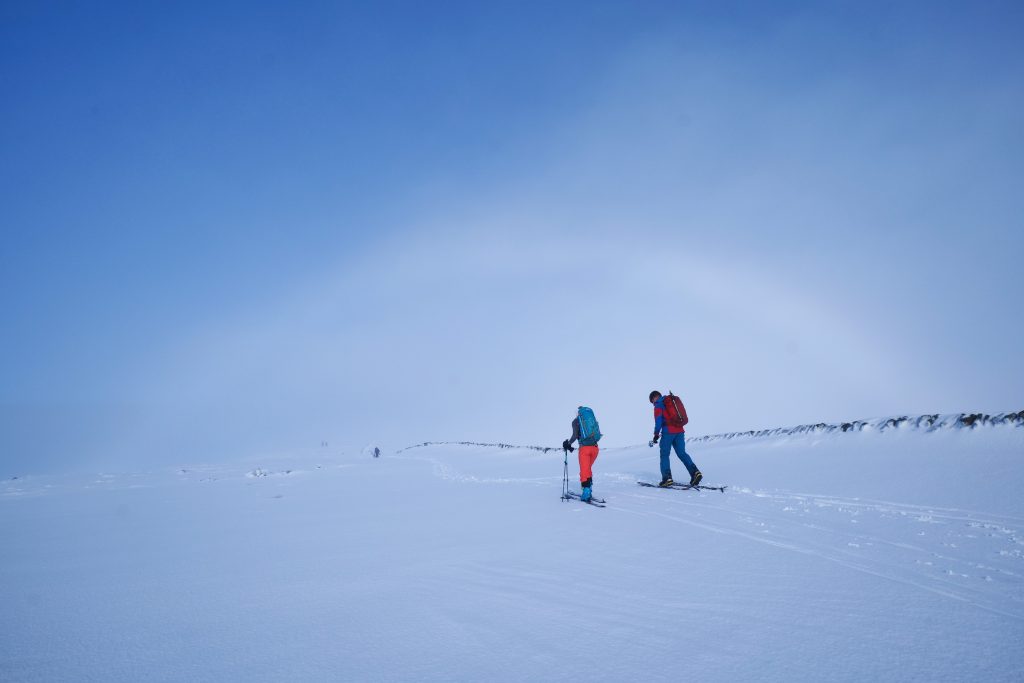 We stopped for lunch on a snowy platform and admired the ever changing view looking back into the glen and started to hope we could be climbing up through a cloud inversion. Sure enough as we ascended, the peaks surrounding us started to appear out from above the cloud, backed by turquoise blue sky. However patches of higher cloud continued to come and go, never quite fully revealing the cloud inversion. Higher up the slope a fantastic & rarely seen fogbow appeared over the mountain and we all stopped to take photos. We reached the end of the Moy Wall at around 950m and made a group decision to return rather than go on to the summit of Creag Meagaidh. As we prepared to descend we realised that we were a group of 2 alpine tourers, 2 telemark skiers and 1 split border. The snow was in good condition and we savoured the fine descent comparing notes on techniques offered by the different kit & stopping to take photos of the slowly clearing tops and rays of sunshine that blazed through the cloud into the glen. 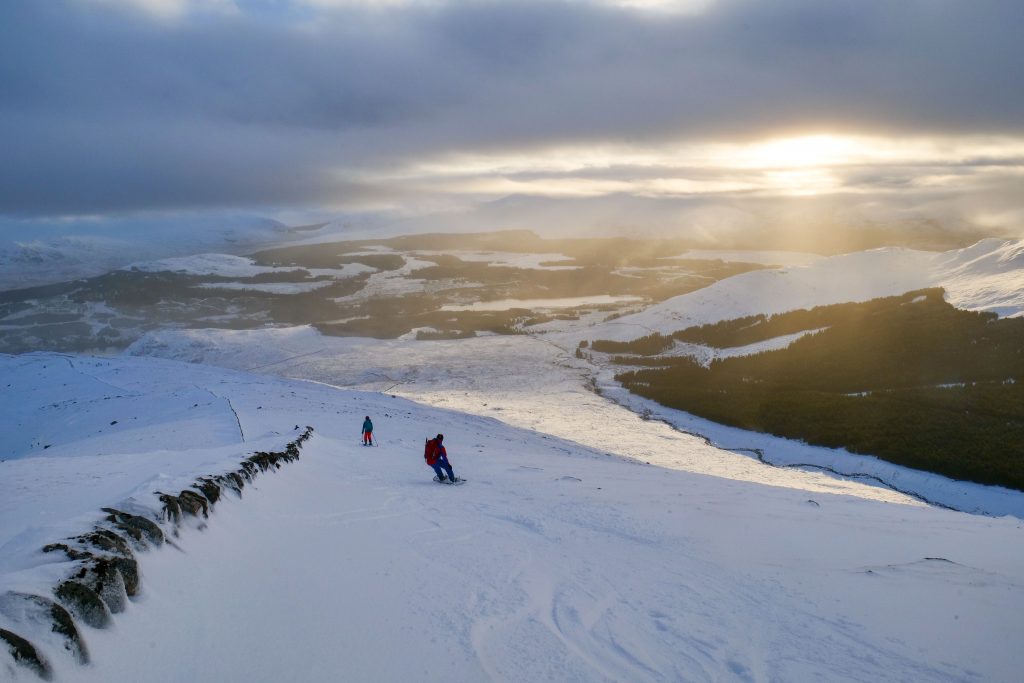 Too soon we reached the crusty, heathery, lower slopes and picked our way slowly back down to the bottom of the wall & the bog. After a final skin as far as we could manage, skis were removed and a 5 minute carry down the steep slope took us back to the cars. The lochs below were beautifully black and still in the peaceful dusk & the frost was rapidly returning. 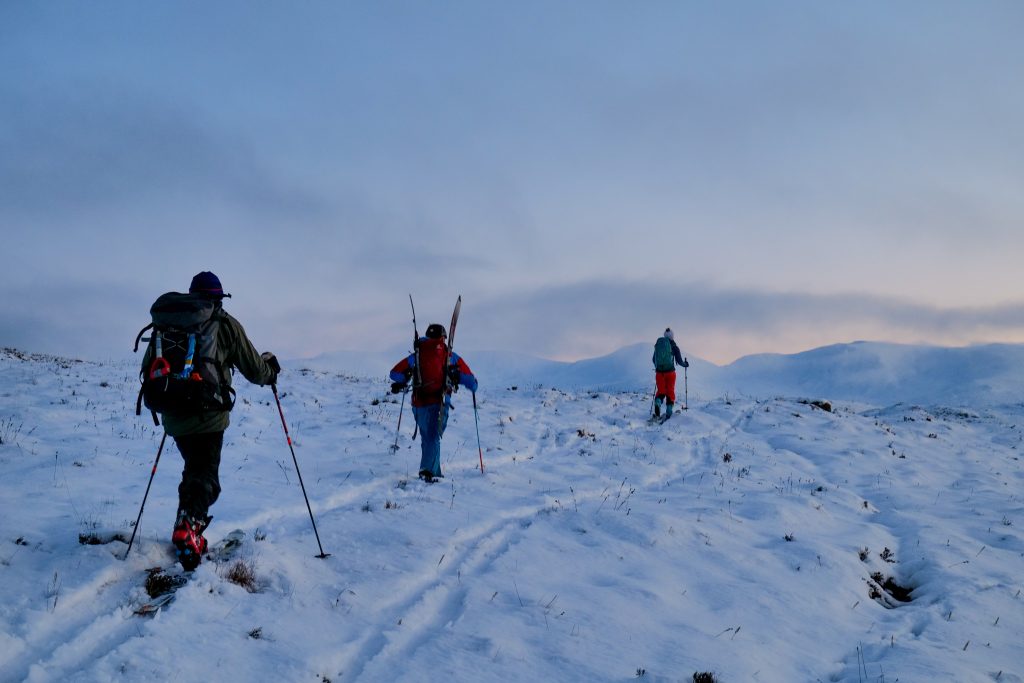