Ben Hee, a jewel in the Northern Highlands by Mike Cawthorne

Home→Ski Tour Library→Ben Hee, a jewel in the Northern Highlands by Mike Cawthorne
Previous Next

Ben Hee, a jewel in the Northern Highlands by Mike Cawthorne

It is little-known and even less climbed, perhaps not surprising when you consider its neighbours include Stac Polly, Suilven, Quinag, Cul Mor, Canisp, Ben More Assynt, a rollcall of A-listers in the pantheon.  Ben Hee, by contrast, is a summer footnote, grassy stroll for a wet day, or a half day, a Corbett to bag. And to forget. But I would argue this relatively wee ben has a claim to be an almost perfect ski hill: four hugely contrasting aspects, or corries, and in a setting as stunning as anywhere in the Highlands. True, at only 873 metres it is rarely in full winter condition, particularly given that the most common approach is from Loch Merkland on its west side, and west sides in general don’t bode well for those on ski. 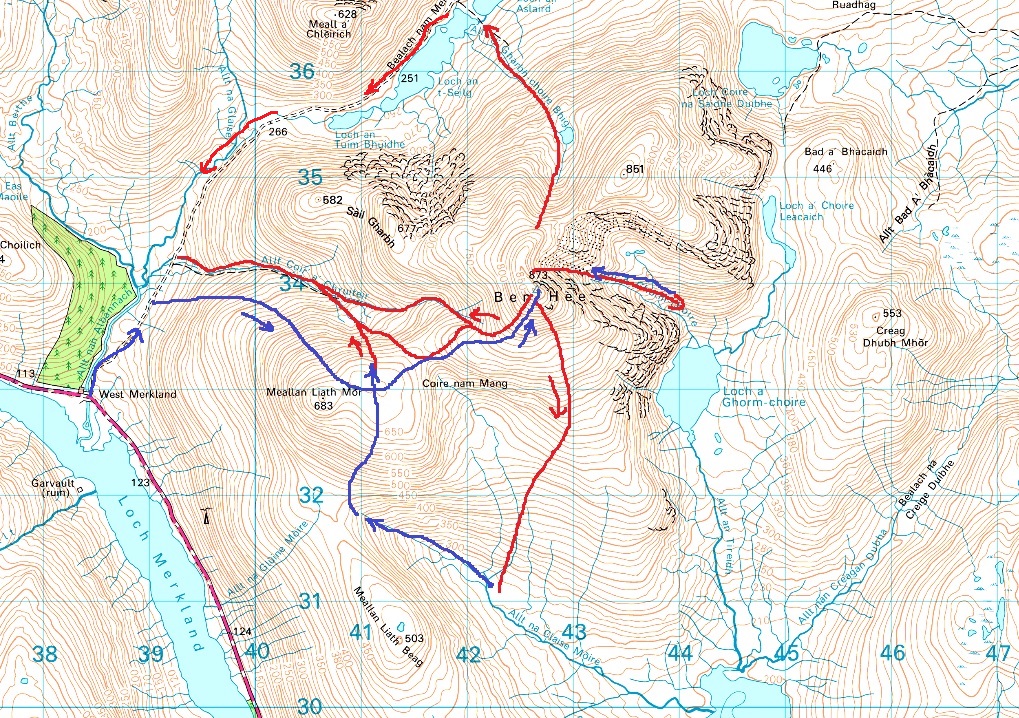 All that can change in a good winter. Floating through powder on Ben Klibreck in that vintage January of 2018 we eyeballed a sleek-looking face twenty kilometres due west. Ben Hee rising blue-shadowed and gorgeous. If a hill ever begged to be skied. We would have been back the next day had the weather not turned, in fact three years would elapse before the snow again fell deep enough and remained for long enough. Last winter she was in condition throughout January but it was a day in early February when we forged north, on deserted snow-covered roads as far as Bonar Bridge, then sunshine by a frozen Loch Shin and Merkland. For two days a big east wind had redistributed snow onto western aspects. Skinning directly up from the track, the surface was a little hard-packed in places, but mostly it was super-soft. A great shallow field of powder snow on our side of the hill. The stars had aligned. This was it. 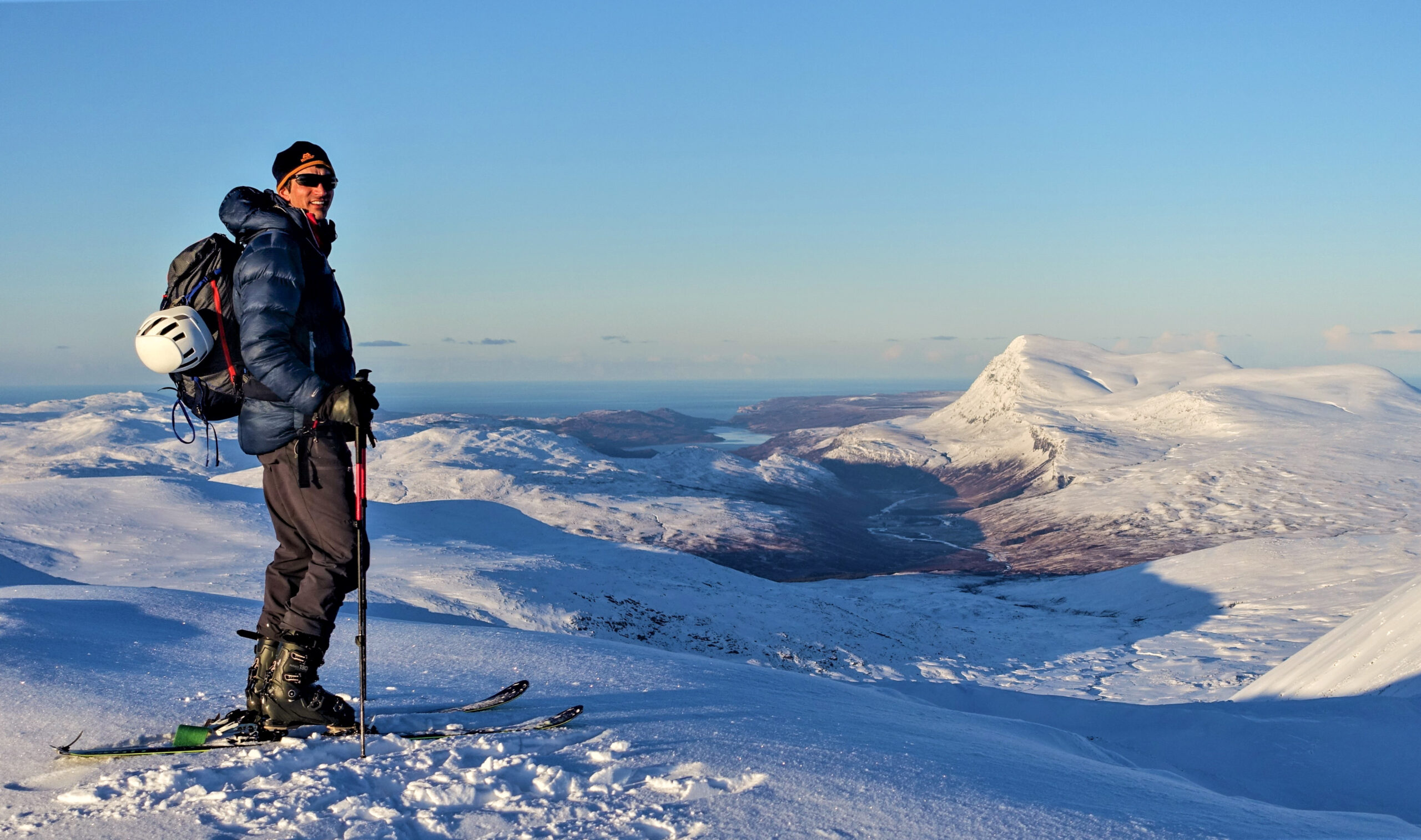 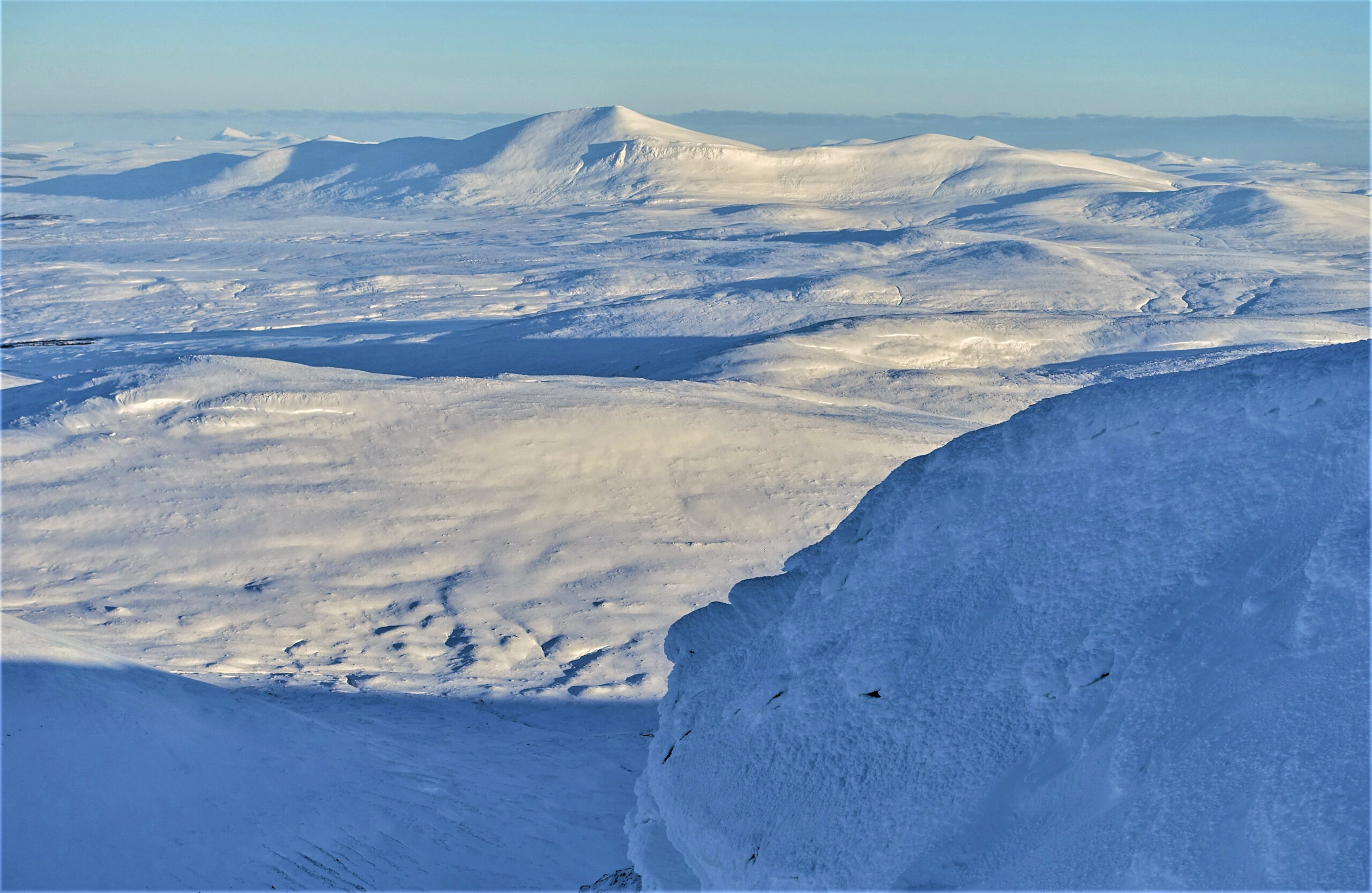 After nearly an hour on the summit to soak in the tremendous views we were presented with lines to suit any mood.  A direct drop into Coir a’ Chruiteir is wide and steep, and steeper still if you hang right of the burn, which is what we mostly did. A gentler run follows the south-east shoulder and keeps a little south of the burn, not quite cigar and slippers but plenty of straight-lining and big carves. Another option is to ski the great scoop of a corrie on Hee’s north side, a natural snow-hold after a maritime dump. One for another day, as was the classic and perhaps rarely-attempted drop east into Ghorm-choire, the most snow-sure of all. We gazed into a beautiful natural amphitheatre, all wind-blasted ice and rime. It spills you by the lonely Loch of Ghorm-choire. A wild and wonderful line but a long way from anywhere. 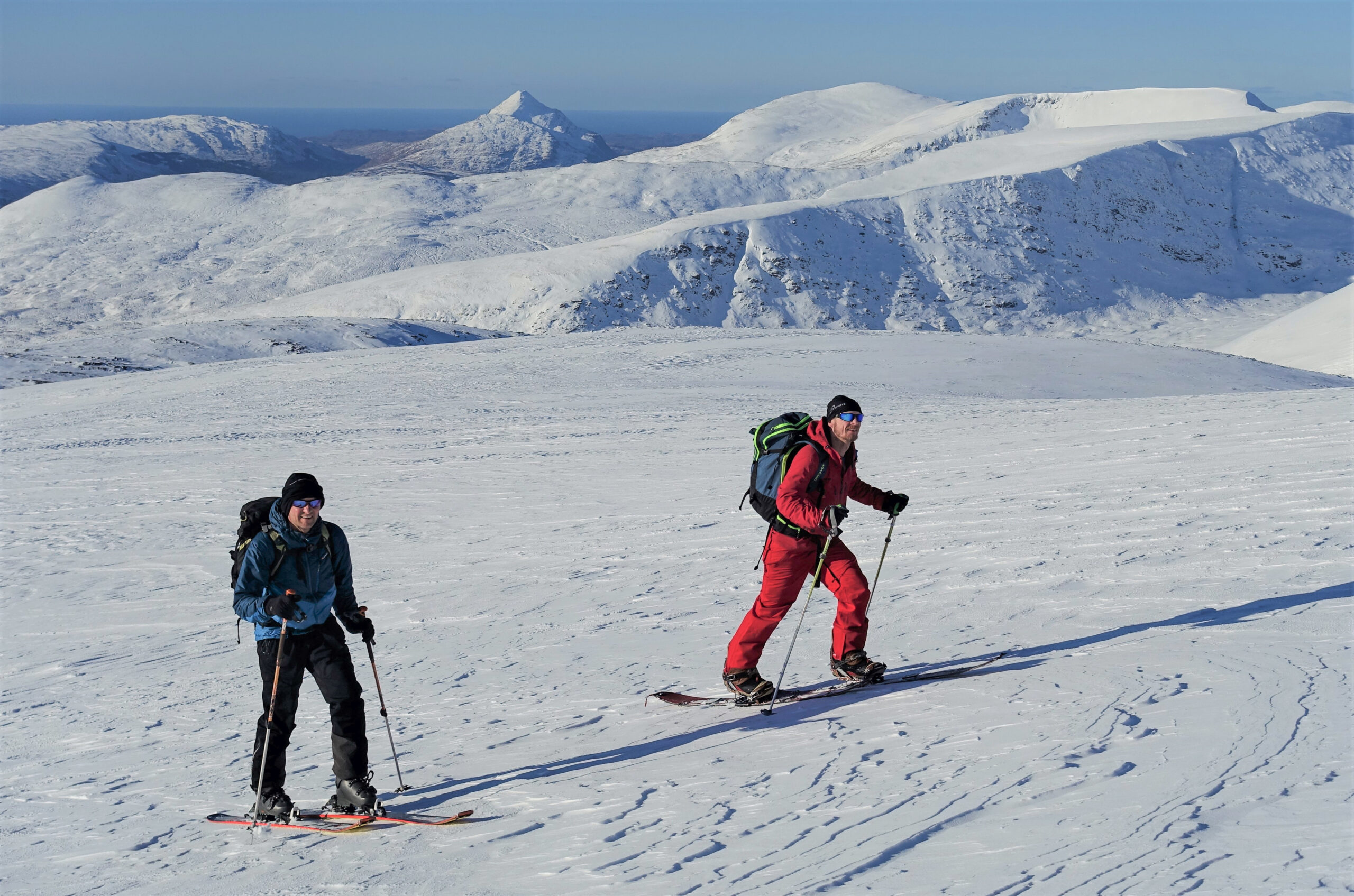 Ben Hee with Ben Stack behind 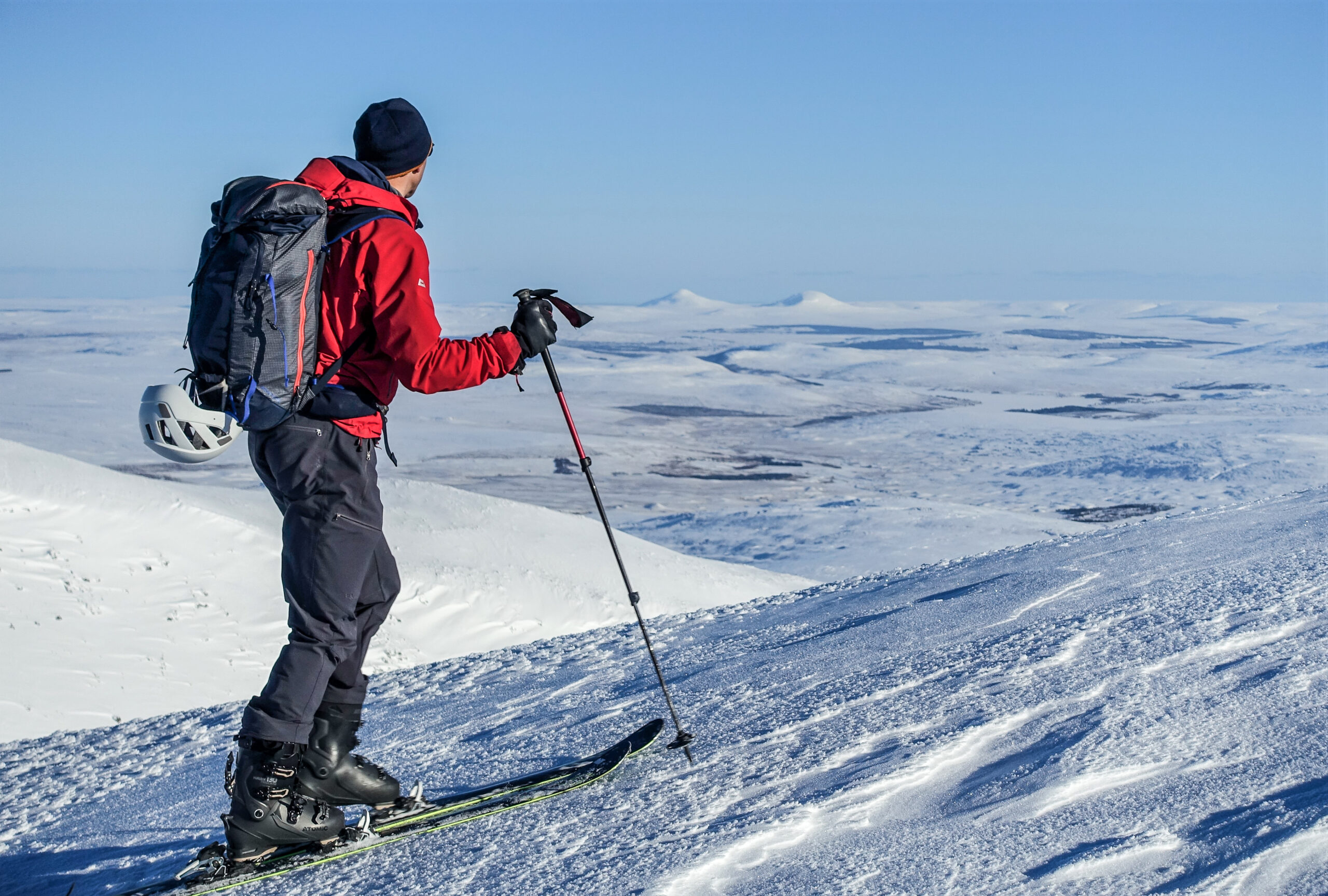 We managed three big descents, the last leaving the summit as the sun dipped between Suilven and Quinag, and it didn’t matter that we got snarled up in the burn, that we went half-blind over snow bridges, down culverts, slipping, stepping, thrashing in the encompassing gloom in a headlong dash to reach our vehicles before dark, which we did, just. A day to match any on ski we reckoned. Magic, novelty, surprise – that’s Ben Hee. 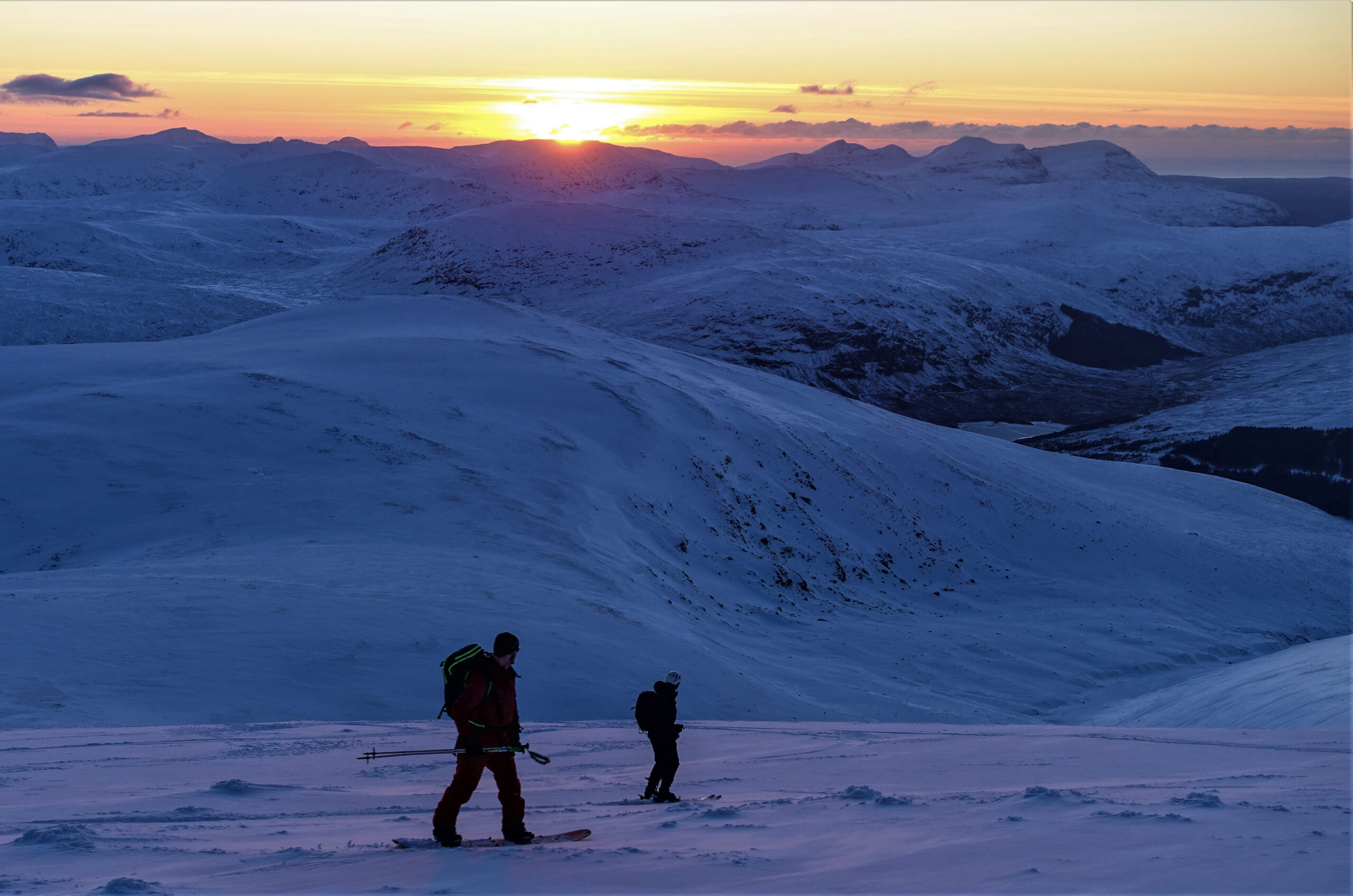