Creag Meagaidh – a jewel in the Central Highlands by Al Todd

Creag Meagaidh – a jewel in the Central Highlands by Al Todd

Creag Meagaidh & its close neighbour, Carn Liath, offer an amazing variety of terrain with ski touring opportunities for all standards & an amazingly long season often starting in early December & frequently lasting into mid April. Varying from classic traverses, easy ascents, sublime powder lines and, for those who seek them out, challenging technical descent lines. In other words there is something for everyone.

Located in the middle of the central Highlands the mountain attracts snowfall coming in from the west or the east and sitting so far from the coast its protected from the worst of the turbo warming SW winds which so quickly destroy the cover further west. Its also a very complex mountain with numerous corries, ridges, cliffs & numerous burn lines so its helpful to have first reconnoitered the terrain in summer whilst good navigation skills are essential as a wrong turn can lead the unwary into serious terrain, especially travelling fast on skis.

The most common popular start point is from Aberarder farm, however depending on the conditions, quieter days are guarranteed from the east above Sherramore lodge (Spey dam) or from the west at Moy Lodge where other skiers or walkers are almost never seen. 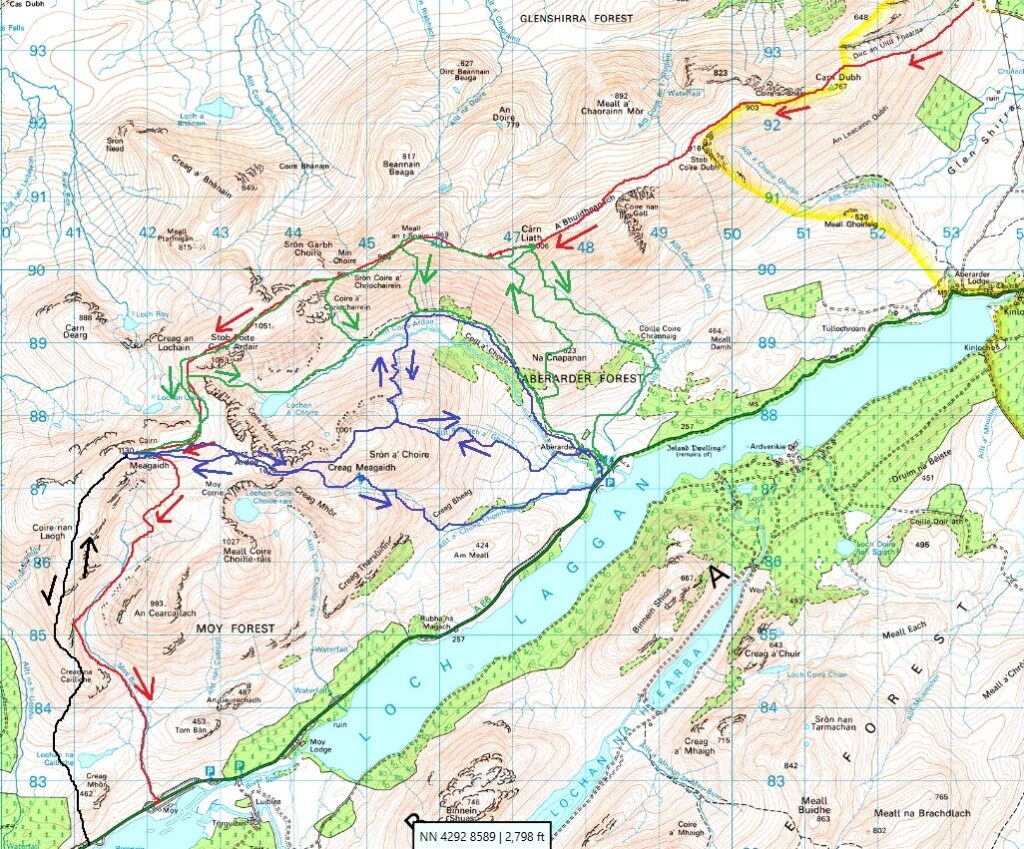 There are various lines of ascent & descent and different combinations can be made depending on snow conditions, the weather & the preferred length of the tour. Most of the routes have escape lines but once on top of Creag Meagaidh there are a limited number of options for the descent.

The following are some of the best routes 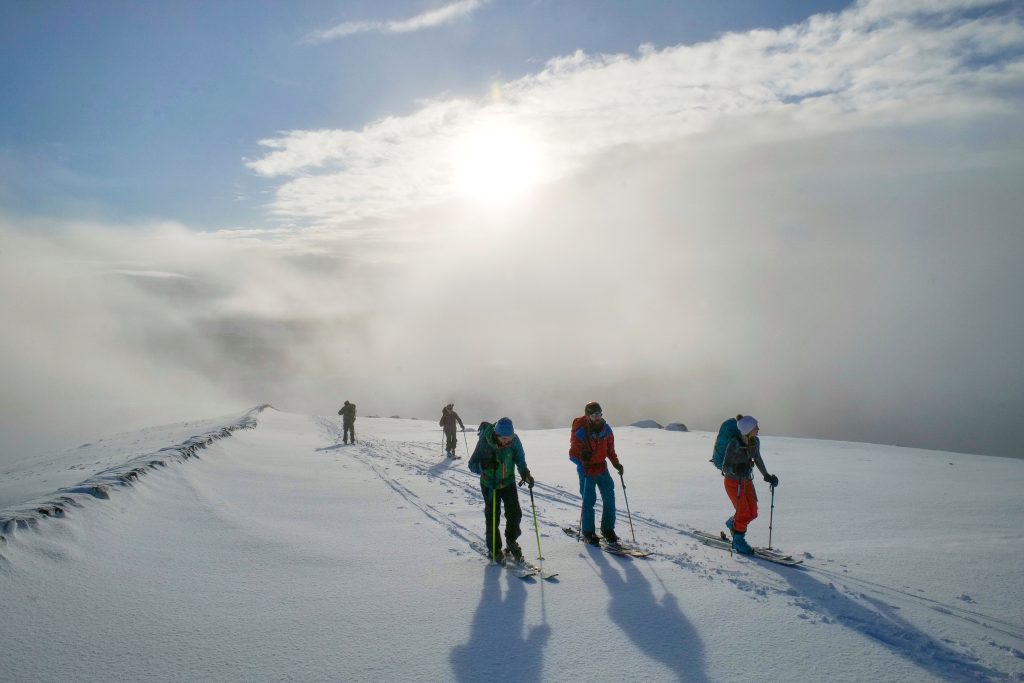 Early in the season & beating most other locations for skiable snow is the Moy wall, an amazing feature which denotes the boundary between Lochaber & Badenoch. Forming a perfect snowtrap and extending over 4km directly towards the summit of Creag Meagaidh it unexpectedly terminates on a broad open ridge at 950m with a further 1.5km of easy angled slopes required to reach the summit . Even in lean conditions the snow often extends 10m to either side of the wall and other than a couple of short lived steepenings the slope provides a uniform angle most of the way down. The start point is either of the laybys to the east & west of Moy lodge; you should avoid parking in the lodge entrance. The first 2km is tough from either layby and although theoretically skiable from more or less the road, a ski carry is normal for the first half hour. Ski/walk around either side of Creag Mhor heading to the west of Lochan na Cailliche where the wall will become obvious. A great day with wonderful views towards Lochaber and nowhere technical. (see black route shown on map above) 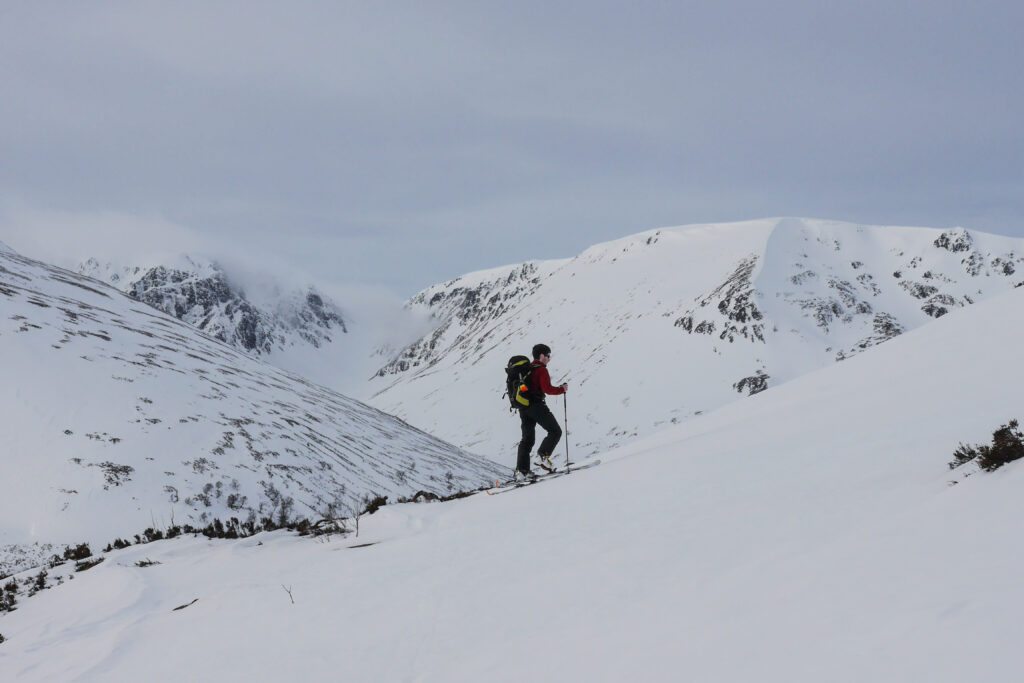 The ascent of Carn Liath

Probably the most popular ski day on the entire mountain since it picks up both Munros & in good conditions provides a magnificent expedition. The route is fairly obvious with a ski carry normal up the approach track to Coire Ardair before branching up & right through the woods towards the summit of Carn Liath. From there, follow the ridge line westwards taking care to keep away from the frequently corniced edge which falls steeply into Allt Coire Ardair. At the window a decision should be taken to proceed to the summit or, if time is short, to drop back down towards the loch in Coire Ardair & the path out which can normally be skied most of the way out. Alternative descents can be made midway between the two Munros, although be sure of the snowpack as the slopes are witness to frequent avalanches. (Green route)

For a shorter day, a tour to the top of Cairn Liath & the frequently sublime descent due south down the burn line into Coillie Choire Chrannaig is well recommended. (Green)

3. Creag Meagaidh via the east ridge of Sron a Choire: 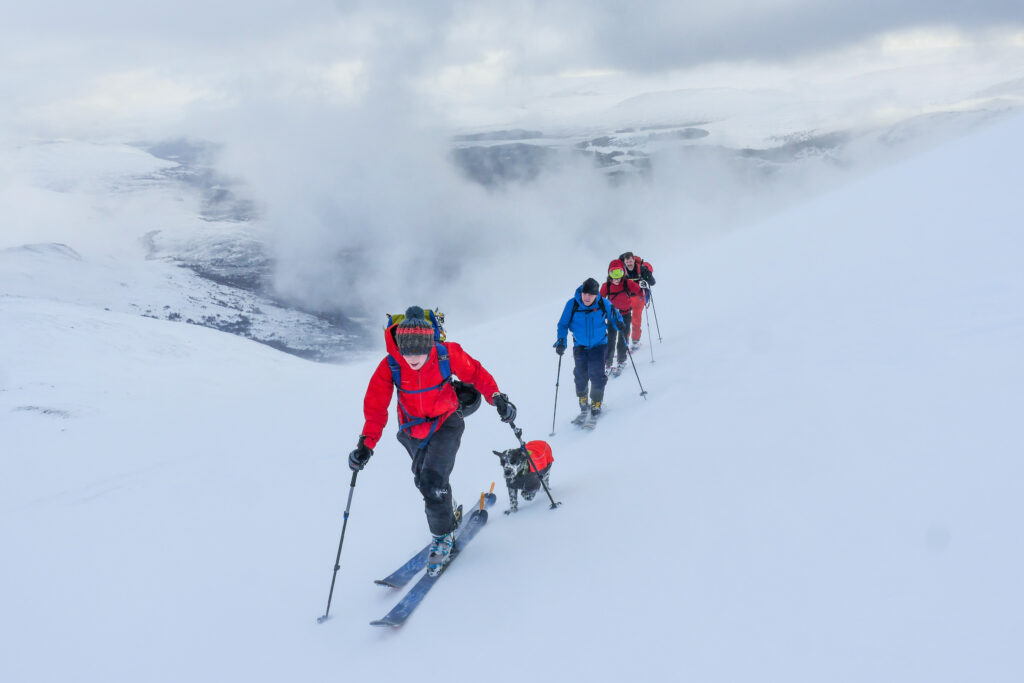 Heading up Sron a Choire from Aberarder

This route can be used for ascent & descent & starts immediately behind Aberarder farm where a track leads NW for a short distance to reach a bridge over the Allt Coire Ardair. From there follow the best of the snow leading towards the shallow Allt Bealach a Choire. Once in the choire the way up is obvious but take care to keep well out from the projecting ridge to the north which in certain snow conditions can & does avalanche. Once on the ridge line it is a straightforward ski to point 1070 at which point a compass bearing should be taken to avoid the cliffs to the north & the very steep ground falling to Moy coire to the south. Various descent lines can be taken including retracing the line of ascent, dropping into Coire Ardair via the window or even skiing into the SE facing coire which takes a line back to the road by the carpark.(Blue route ) 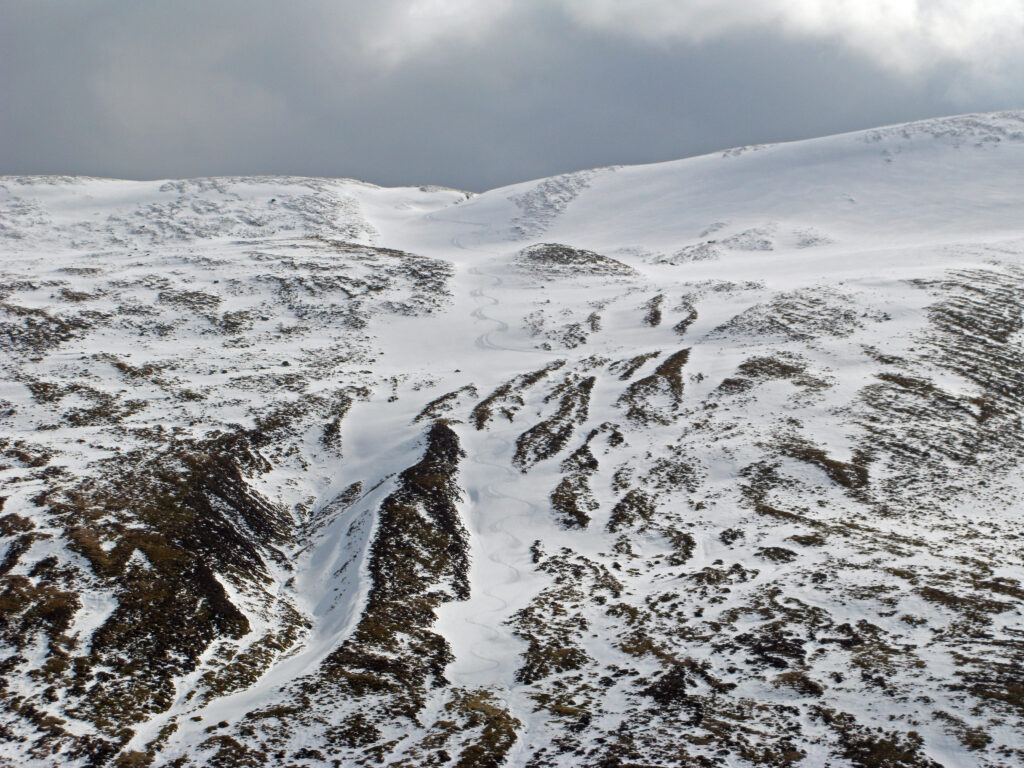 descent line to the north of Sron a Choire

An alternative & very snowsure hidden line of ascent/descent can be gained by heading up the track towards Coire Ardair. Once round the corner, drop down to the Allt Coire Ardair which can be crossed without difficulty, and head up to the shallow burn lines which fall to the north from the northerly ridge of Sron a Choire. North facing, these lines are remarkably snow sure and are well worth investigating when the snow appears to be sparse. (Blue) 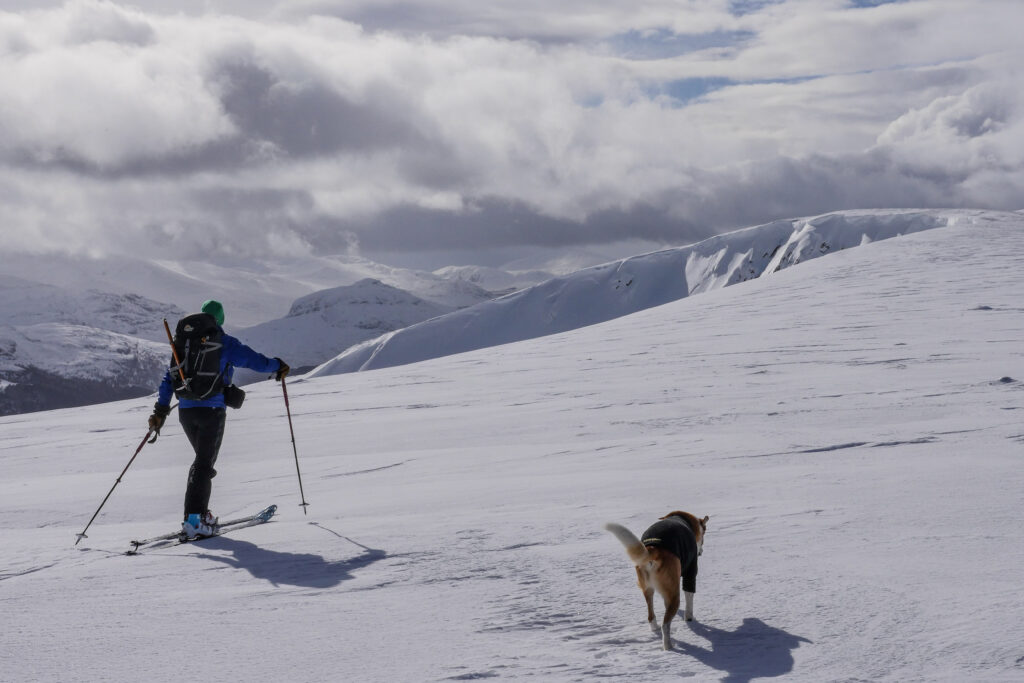 This is a true tour de force on ski requiring good weather & longer days. It can be done from the east or from the west starting or finishing at Sherramore or Moy Lodge with two cars required; whichever line is taken a magnificent day is guarranteed! The ascent from the east is described since it provides the best of the descents & has the added advantage of the better views.

Start above Sherramore lodge leaving the car at an old quarry on the right approx 2 miles from the end of Spey dam. From there head up the easy angled east ridge of Carn Dubh to reach the long easy angled plateau which leads to Carn Liath. Navigation is generally straightforward with an old fence line leading directly to the summit. From Carn Liath take the line described in route 2 to the summit of Creag Meagaidh. By now time will be pressing so after taking in the magnificent views from the summit, a decision over which route to ski is required. The options are either down the Moy wall or head down the line of the Moy burn. If choosing the line of the burn, a wonderful easy angled ski quickly leads to steeper terrain which should be turned to the left (east) to follow a subsidiary burn leading to the coire floor. From there the Moy burn normally has a snow wreath on its left side which quickly leads the skier down towards the end of the snow line & a boot pack the final 2km to the car. (Red Route)

So there you have it, a selection of the best routes on one of the best mountains in the Highlands. 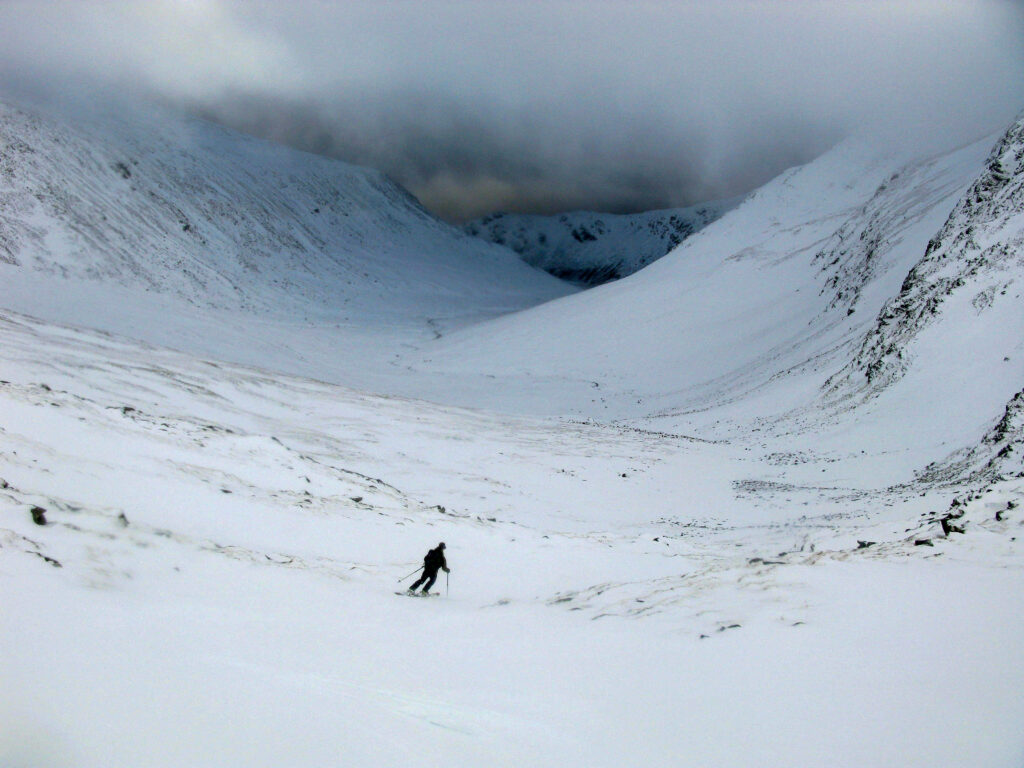 Heading down the Moy burn

Lines from the summit of Meagaidh down to the Moy burn