By Mike Cawthorne. I’m not altogether sure why the met office has begun naming storms that sweep these islands. But at least we have someone to blame for the atrocious start to winter. The early culprit was Storm Frank, all the way from the tropics and carrying a very large bladder of warm rain that all but stripped the pre-Hogmanay snowcover. When five of us gathered on a grey morning at Inshes we knew it was only for a hill walk. Ice axes strapped to our sacs were for decoration only. Or so we thought.

At Wyvis car park we were joined by Dave More from Ullapool who told of big winds by Glascarnoch and a forecast of hill snow later that day. It might feel a bit like winter afterall. I threw in my gloves, though not my monkey cap. Let’s not get carried away. So there were six of us on the path to a cloud-swathed Wyvis – Troy, Donald, Dave, Terry, his son Ruairidh, and myself. I’m not sure if Donald thought the early pace a bit slow but after ten minutes he decided to run back to his campervan. Forgotten something, so he said.

The pace definitely slowed as we approached the shoulder of An Cabar and fought periodically against a big sou’easter. It toyed with us in gusts and lulls and at some point we hunkered in the lee of boulder perched on the ridge and munched sandwiches and remnants of sweet treats from the festive period. Rime had begun to coat grass and rocks, and the wind felt bitter. It was not exactly a council of war but at this stage Dave, Terry and Ruairidh decided they would climb a little further then turn back, happy enough for the small workout and to see the cobwebs away. Donald, Troy and myself pushed on, and I’m glad we did. Over whitened ground we were pummeled sidewards by hail and blown snow the two kilometres to the summit. The only let up in the onslaught was a space fifty or so metres below the trig point, a strange pocket of stillness from where we took a minute to examine the great snow-holding bowl of Coire na Feola. Virtually snowless thanks to aforementioned Frank. 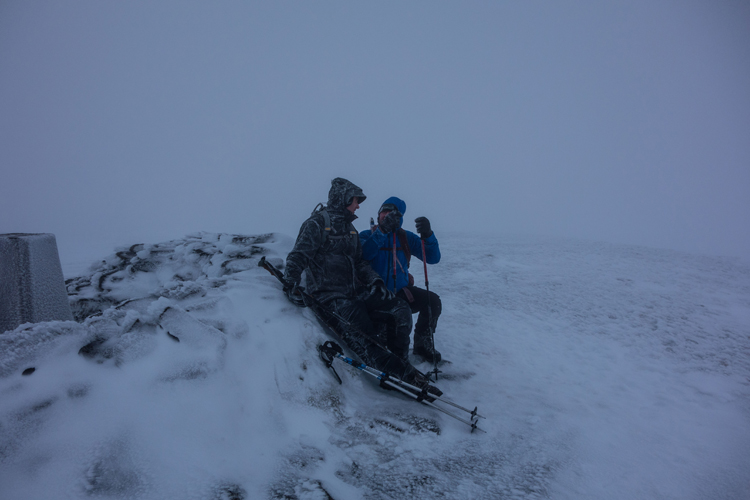 For variation and because we wanted to escape the wind we dropped a little and made a more direct route back to our ascent ridge, and here we came across a real rarity, an extensive snow slope. It swept down to about 800 metres and we reckoned would have made a wonderful ski descent, though on balance it wouldn’t have been worth the sweat of lugging our skis all this way. Inverness Backcountry Ski-carrying Club doesn’t quite have the same ring. Or appeal. Anyhow ice axes were required to safely traverse it. A little further on we found the ridge and dropped below the cloud and trundled down in good humour. Frank had done his damndest yet there was still snow. Just hope he doesn’t have any friends. 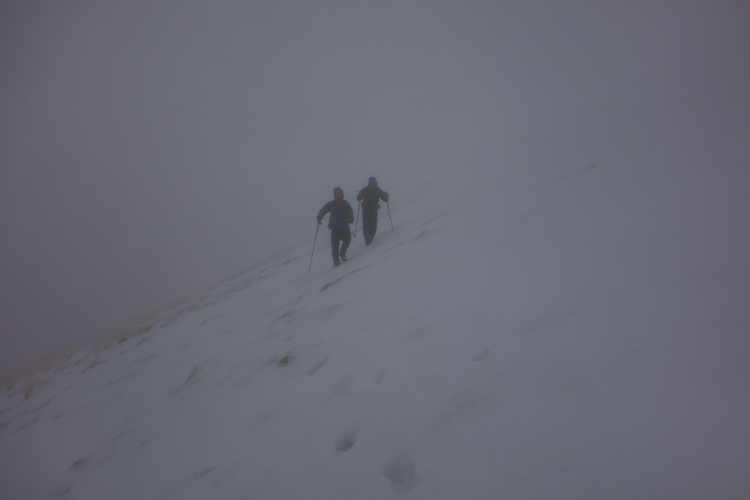