Twas a dark and wet night in October 2013 when Mike, Donald and Peter sat down to plan the programme for the coming season.  Various trips were already planned but we needed something in the West Highlands. Glen Shiel offered the obvious location with great scenery and great skiing, potentially. The non-standard nature of the venue also motivated us to stick it down on the programme.

It was therefore surprising to see so many people turn out for the trip. A brightly clad group met at Inshes car park, all looking forward to some uncertainty and the potential for good skiing. Sociable it certainly was and 13 people departed from the road at breakneck speed. 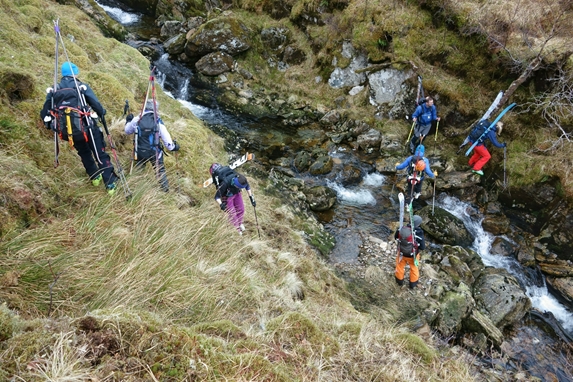 Route finding was easy with good paths up the hills.  That said, we hadn’t quite decided on a route so some alterations to direction were required early on and a classic burn crossing was the reward for the indecision. The rocks were slippery and one member of the party had a brief frission of excitement caused by both ski boots being below the water line. 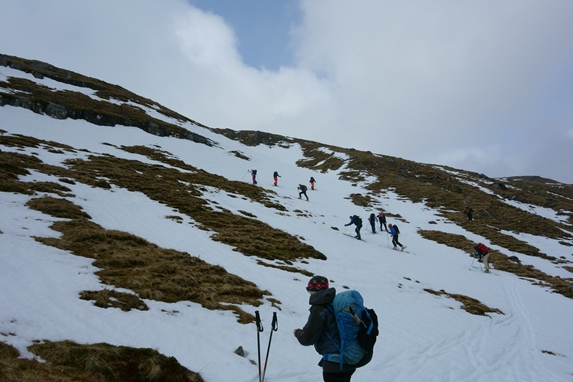 Boots slightly wetter than before, we continued up the glen into the coire. This was classic scottish ski terrain – walking over bogs and having to cross another river even to get to the snow. About an hour and a half saw us at the bottom of a steep snow gully granting access to the slopes above. The skinning was steep and the entire party got some good practice at kick turns. Teamwork was to the fore as good skin tracks were set up for followers to enjoy. 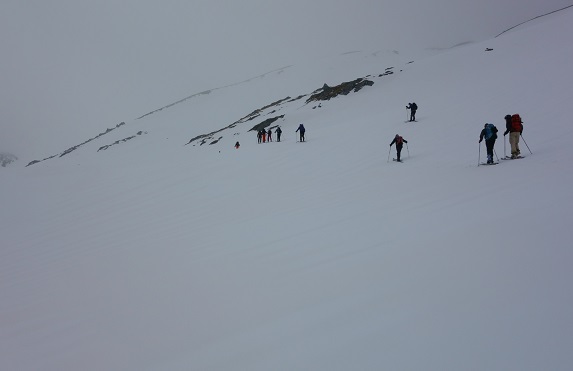 The upper coire had many features and we commented on how small the numbers of people would be who had stood in those places. The ridges are well trodden but the coires less so. 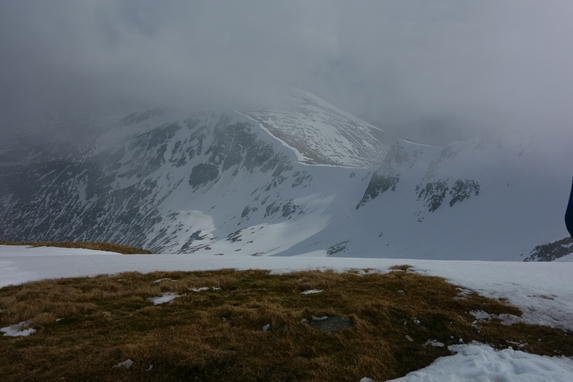 We arrived at the ridge which had large cornices. Almost double corniced in place, there was a debate as to the safety of continuing up the narrowing ridge to the summit. Once committed to though, the ridge was actually very easy and we had only been about five minutes from the summit. 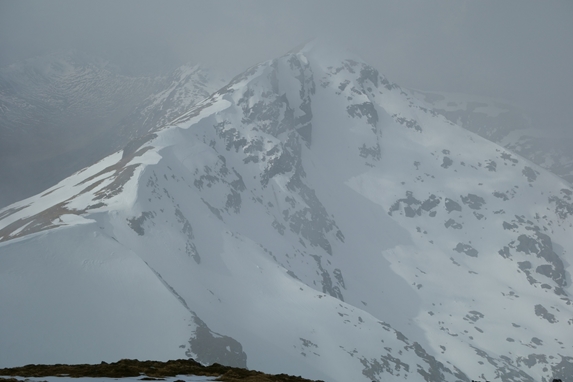 Mist always adds something to a day in the hills and Sgurr an Lochain looked amazing directly across from us on Sgurr and Doire Leathain. We didn’t see the doire leathann at any point though. Too many deer? 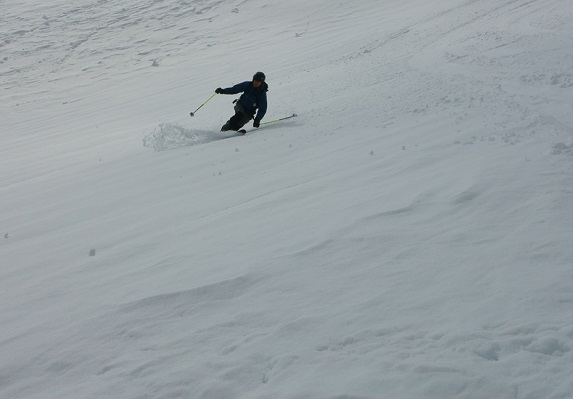 Descent number one saw the whole party heading down into Coire a’ Chùil Droma Mòr. The snow had some nasty surprises for us though as uniform easy sections were peppered with sudden, invisible sections of very slow, heavy snow. This led to sudden decelerations and was particularly challenging for anyone on telemark gear.

Some of the party continued down a narrow gully which passed through a rock band where a glacial ice fall would have been some years ago. This required careful and committed skiing though with a fall being rewarded by smashing into rock walls followed by a tumble onto boulders. No one did fall though. 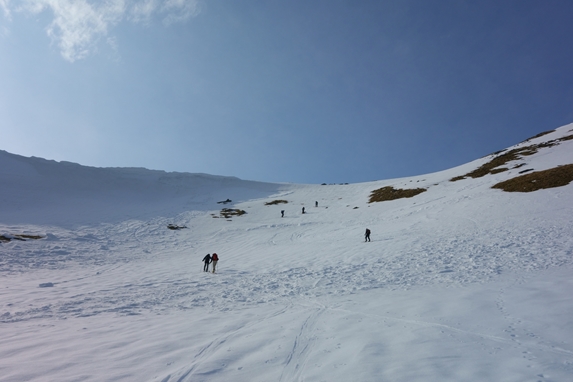 The party split at this point with the lowest section skiing back up the route we had ascended earlier and the second lot ascending by the descent route. There was a lot of ascending and descending on the day with GPS devices recording 1766 metres of ascent. I can’t see where that was but if it’s on the internet it must be true. 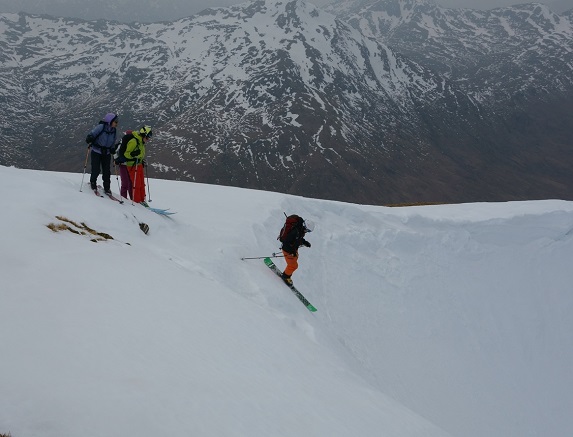 Both parties met up again at the summit of Sgurr an Doire Leathainn and had a look at the much steeper entry into Coire an Lochain. The plan was to descend into this coire and ski out as far as possible before walking back to the road. More confident skiers led the way and the snow was much better in this coire. The entry looked steep from above, and was steep, but a sure footed approach meant that any issues could be dealt with. Some blasted down the slopes and got to the bottom quickly whilst others enjoyed the turns. Everyone smiled. 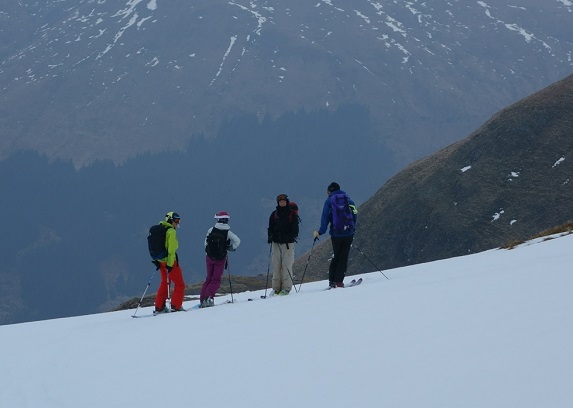 Further down, close to the lochan (still frozen) of Coire an Lochain, we headed onwards unsure of how long the snow would last. It ran out above another rock band, similar to that on Everest, at about 630 metres. 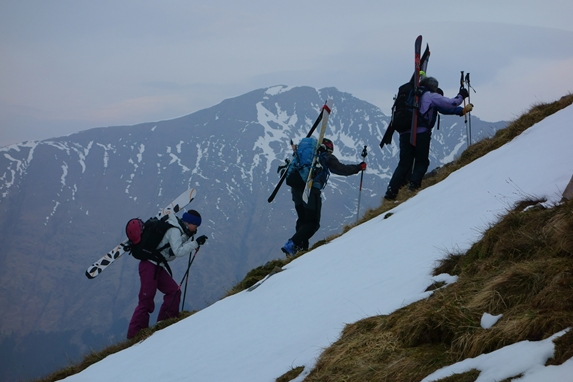 Debate ensued as to the best route down and we settled for a rising traverse around the ridge which saved a bit of walking and deposited us at the top of a narrow snow line heading downwards. It was less than a metre wide in places. True to IBSC tradition, we skied to the end of the snow. And I mean the real end… 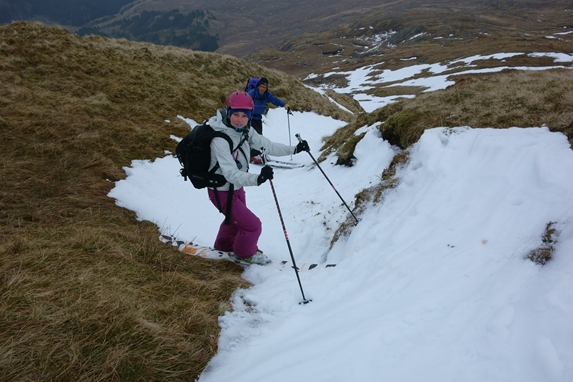 The glen looked great as we headed down towards a well deserved drink at the Cluanie Inn. 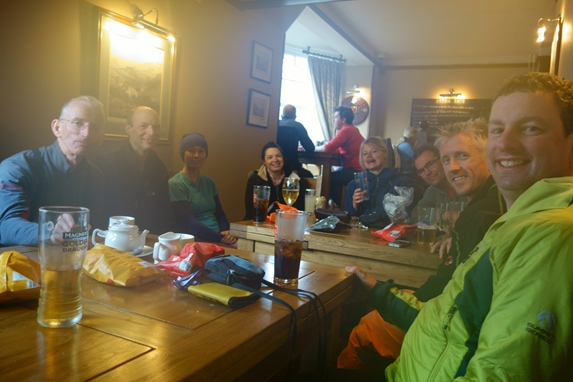 If you like the sound of this, please join the club and come on one of our events.  See Programme and Membership.