An inch or so of fresh snow lay on the ground at Dalwhinnie as Gordon, Donald and myself set out along the track by Loch Ericht, the cold conditions ushering an end to the recent mild weather. We were all pretty well freighted with overnight gear and skis, boots and poles strapped in a cats cradle to our bikes but Donald with his panniers won the prize for excess baggage. Wobbling and unsteady at first then making decent progress on the gritted track to the lodge. Snow was encountered as we climbed steeply from the lochside and our back wheels skidded and slew. For a while I decided pushing was easier, our antics watched by some red deer and a trio of fed-up looking ponies at a feeding station.

Rounding the corner Ben Alder with its ridges of blowing snow came into view to whet tomorrow’s appetite but it seemed distant and remote and its plateau wind-raked. Snow showers came and went as we threw up our varied collection of shelters, Donald’s effort on two wheels now rewarded as a high-end mountain tent complete with flashy logo sprang up. It dwarfed my double hooped bivy and Gordon’s more modest half-dome.

Some grub, a brew of coffee, chocolate, and we struck out for Carn Dearg. Its north shoulder had caught recent snow and we skinned slopes awash with spindrift, onto the summit crown, the sun casting shafts of light into An Lairig below but the wind bouncing us about until we stripped our skins and turned about and were propelled downslope. 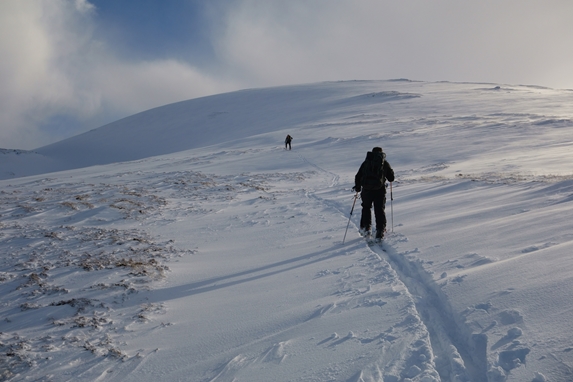 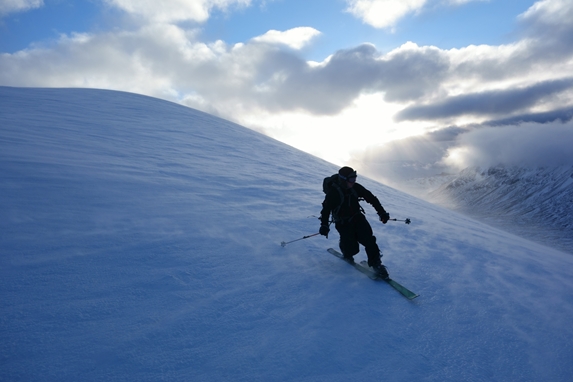 First a lovely steep descent over wind-packed powder then a long traverse and some great skiing over the shoulder, so good we shouldered skis and waded up for another run. In the last light and falling snow we cut crazy lines over snow-covered heather in a ‘hope for the best’ final schuss that landed us by the stony track, just about intact. 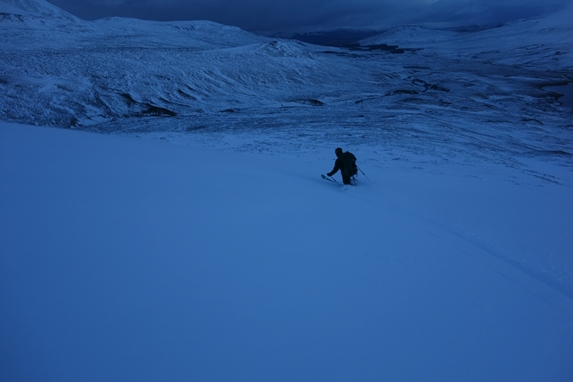 Too late to go wood foraging we settled and dined on Gordon’s boil-in-bag army rations and drank coffee and later watched a matrix of stars in the void. 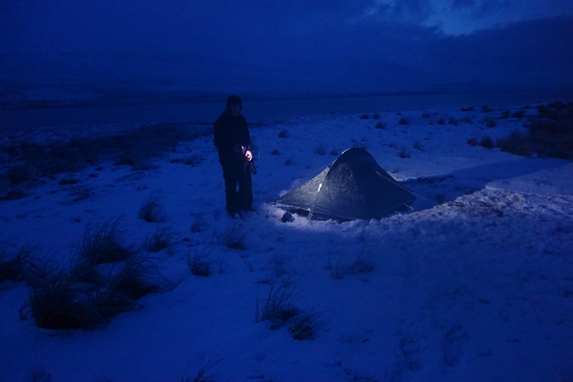 Wind, snow and hailstones rattled during the night and we cradled our morning brews in a freezing wind and muttered about options. Ben Alder struggled to throw off its cloud and for a while we contemplated a different hill, but a burst of sun had us geared up and on the track for our appointment. 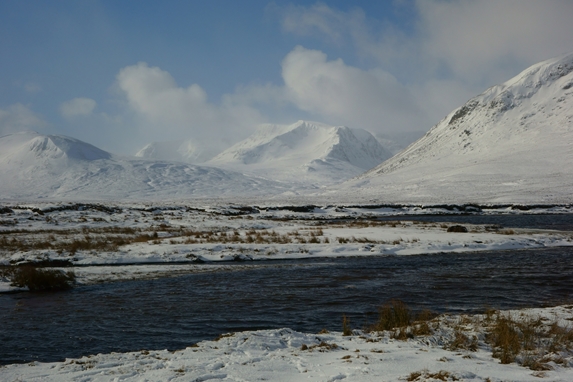 Rather than fight the wind and attempt to reach its summit we aimed to reach and play in the immense snowfields below its eastern cliffs. A couple of kilometers in we donned skis and skins and crossed the burn and began steadily gaining height, late morning sunshine striking the twin Leachas and casting blue shadows on the snows. 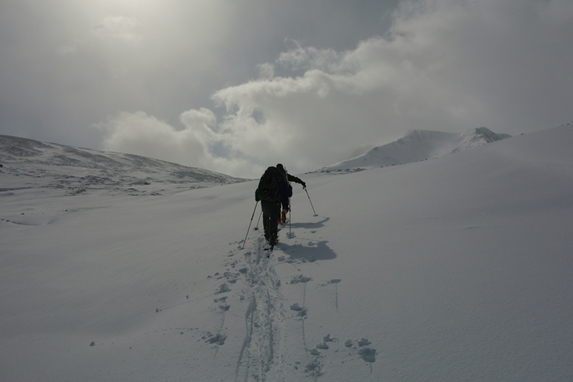 From experience I knew the burn draining Loch a’ Bhealaich Bheithe could present a bar to progress. Being fed by a sizable loch it tumbled noisily about snow-covered boulders, its margins uncertain in the drifts. Skis now strapped on our sacs we tried at a few places, toeing with poles, thinking maybe we should play safe and barefoot it across. I bridged a decidedly doggy looking gap and whooped up the far bank, but the others, perhaps wisely, wouldn’t follow, and for a good time we climbed on opposite banks. 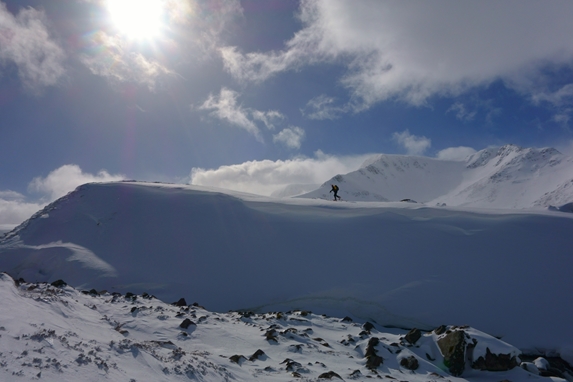 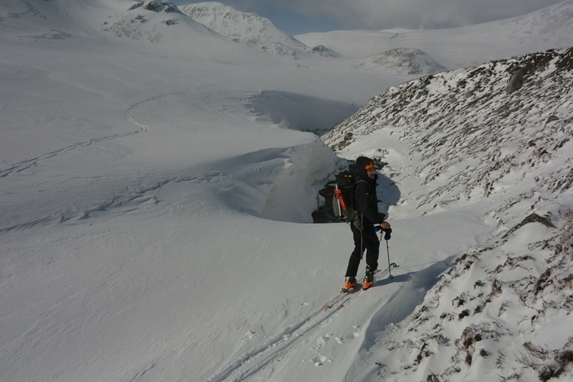 At some point a snow bridge many metres thick overwhelmed the burn and we reunited to brew and take a late lunch and contemplate our awesome surroundings, the great eastern corries of Alder stretching sun-bathed and in unbroken snow. We skinned as high as our limited time allowed and reached a point just below the Short Leachas. 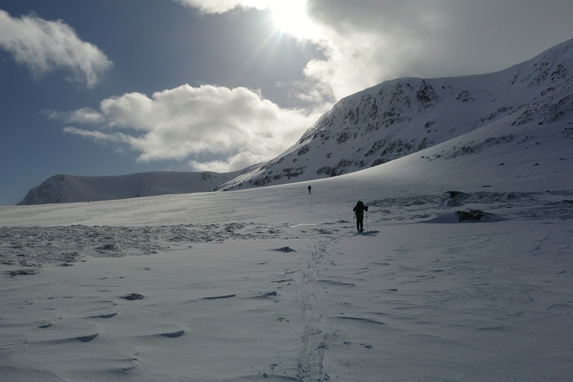 Ten sumptuous turns and we were back at the crossing. Brief reward for our endeavour maybe, and Gordon reckoned he’d never cycled, walked, skinned so far for so few spins. 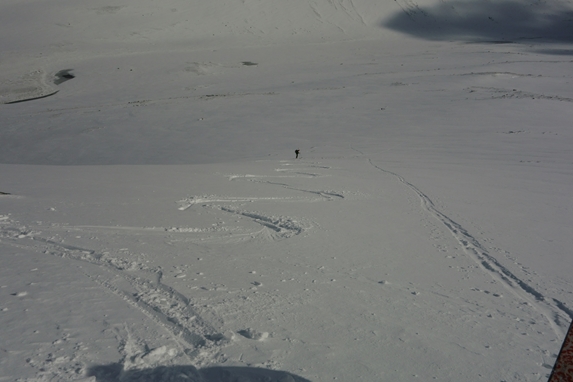 We did manage a few more in the heavy powder overlying the heather but downhill from the burn was the usual ‘seat-of-your-pants’ stuff, Donald leading the charge. Thawing snow and spring warmth by the tents then back to two wheels and mostly freewheeling to the lodge, braking only to ruffle the mane of a pony that now seemed happier with the sun on its back. 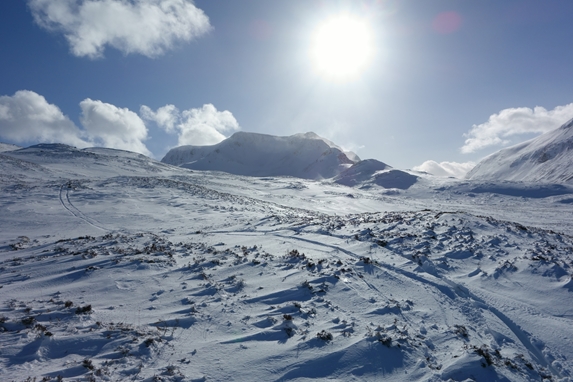 Dark on reaching Dalwhinnie and a fish supper stop at Aviemore rounding off a fantastic weekend.