Given the right conditions a traverse of the Grey Corries would be one the highlights of any backcountry ski calendar, and so three of us, Richard, Gordon and myself, headed off early from Inverness. Roy joined us at Spean Bridge where we grabbed bacy rolls and coffee and drove up the bumpy track, halting when it enters the great swathe of Leanachan Forest.

The Grey Corries ridge loomed white and gleaming from morning clouds, racking up the excitement levels. I for one couldn’t wait to reach the snowline, especially with the forecast suggesting the shutters were coming down in the afternoon. In an hour or so we had left the conifers and were sitting in a great wedge of the burn that drains Coire Choimhlidh, easing on our ski boots. Maybe we should have done that before getting our feet wet in the crossing, though Roy, the canny fellow, had stone-hopped a little downstream and stayed dry. A steep haul from the gorge and with every step snowy hill chains began to unfurl, especially the icy faces of Aonach Mor and Aonach Beag only a few miles to the southwest.

In late morning sun the Grey Corries ridge appeared smoothed and weighted beneath layers of winter snow, its crest and summit crowns overhung by huge cornices. But as we reached the snowline at about 450metres and applied skins cloud was building over the Aonachs, the wind picking up. 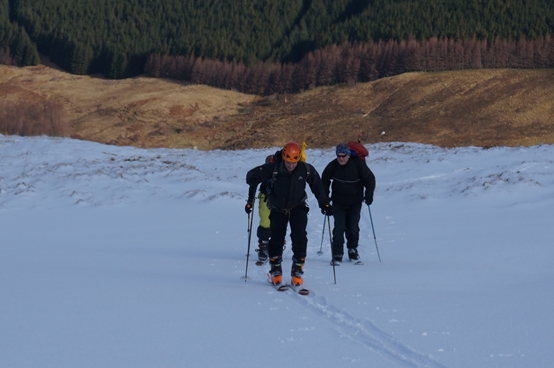 The forecast, so promising earlier in the week, had suggested conditions would to close in a tad by afternoon, and so our plans were fluid. After a hour of uphill I think we all realized a complete traverse would have to wait for a finer day, but we were still keen to reach the summit ridge. The way to Beinn na Sociach was heaped in a mixture of fresh and windblown snow then approaching the first top the slope became scoured and, noting the monster cornices that tottered over the east face, we all reached for our axes. 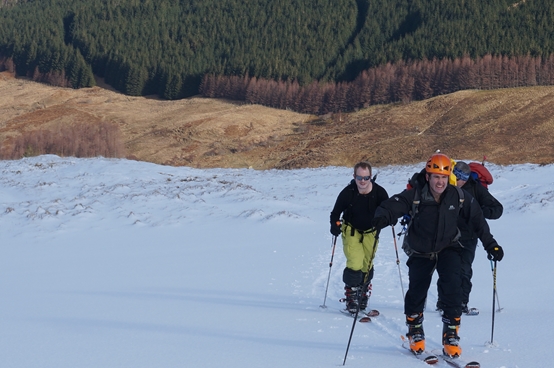 A brief window to the Mamores and south then the shutters came down. The last metres below Stob Coire Easain were steep, either icy or covered in loose windslab, so we shoveled a lunch pit, brewed coffee, munched snacks, and prepared for a huge 600 metres of descent. In a swirling spindrift and full white-out and with Gordon holding his compass and yelling directions we pointed ski tips down, at first giving the berg-like cornices too much leeway and slipping too far west, so had to kick into a long sweeping traverse and regain the shoulder. 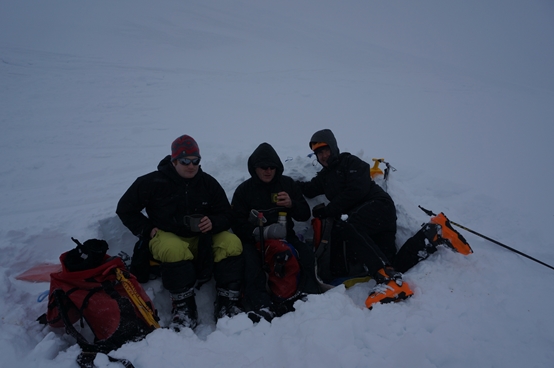 For ten minutes or so I, and I reckon Richard and Roy as well, were skiing to survive, only Gordon went downhill with style and panache, making turns as if some stray official from Sochi might have appeared behind a rock to award marks. At some point we began to see further than our pole tips, then the wonderful unmarked snow ridge of ou ascent ran out below. We gathered, picked our line and carved it up. A mixture of styles to be sure but everyone agreed the best descent of the winter so far. It was a little disappointing we hadn’t managed a complete round of the Grey Corries but given the quantity of snow I am sure IBSC will be back before the curtain falls on this remarkable winter. 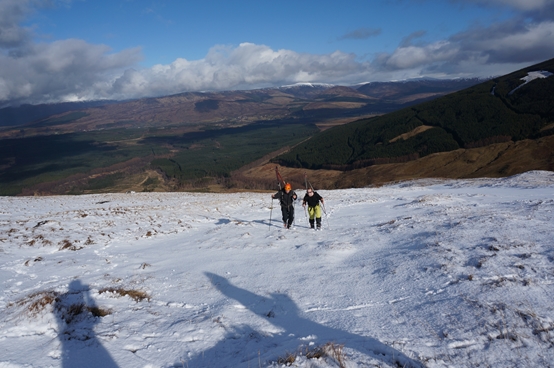