The Cairngorms had been battered all week but the Beast from the East finally ran out of puff in time for our gathering in Glen Feshie. Milling about the small carpark were sixteen skiers, one of whom was only in attendence because he’d been stranded in the Highlands due to a snowbound Bristol. We were able to ski straight from the cars, a vanguard leading a brightly coloured tail that extended back some hundred metres through the woods. All reasembled at the second burn crossing. Assessments were made of the conditions and a decision on which slope to aim for. The Beast may have passed but it had left a residue of cold, overcast and windy conditions, not a day for the high tops.

We struck an ascending line towards Coire Gorm a’ Chrom-alltain and stopped to refuel in the partial shelter of the burn, some of the party here putting their shovels to good use in a creating a shelterwall. From here we ascended in worsening conditions to around 850 metres. A whiteout threatened and after a short council we decided to proceed no further. Sixteen skiers then turned and headed for home. I’d skied this slope a fortnight ago in fantastic powder conditions but thawing and freezing since then and the activities of the Beast had left pockets of windblown and scoured areas, though still great cover. 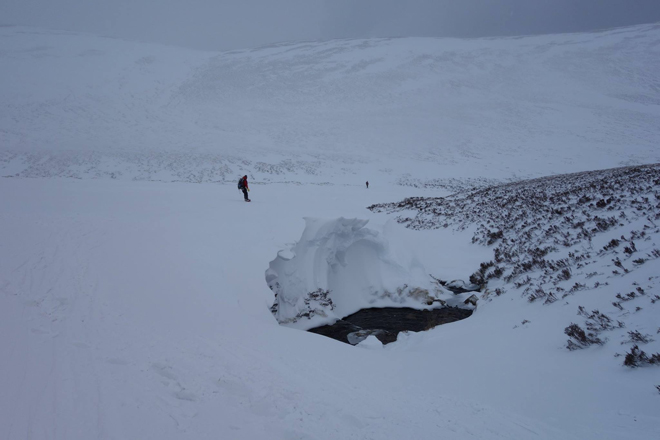 Whizzing past our lunch spot the party split, most going headlong for the burn with its drops and narrows while a few chose a long lazy traverse back the first burn. A few of us reapplied our skins and headed into Coire na Cloichre which was fully loaded, but with impeccable timing the cloud dropped and I for one had that nauseous feeling of skiing simply by feel, snow and air merging. Overall a decent ski in mixed conditions, well worth the effort. A small crowd reconvened at an Aviemore café whose speciality was coffee, cake and huge hottubs, the latter alas only for viewing.  By Mike Cawthorne. 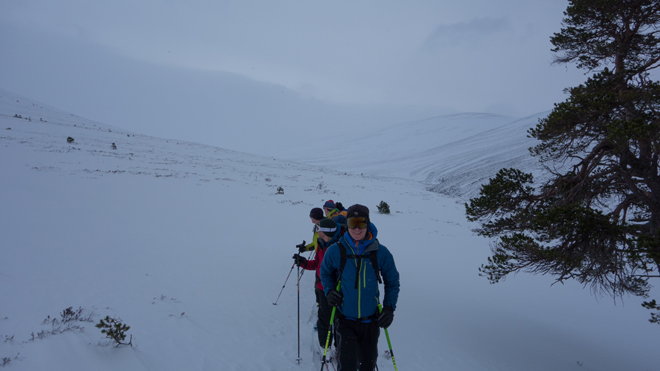