By Andy Ince. The Club Igloo Camping weekend was held this year in Glen Affric and I was totally amazed that weather and snow conditions were so benevolent. Not only was there settled high pressure with low winds forecast but the previous weeks’ snowfall resulted in plenty of low level snow in Glen Affric.

I guess that some may think Igloo camping is akin to sleeping in a fridge but compared to sleeping an a noisy flapping tent or dripping snow cave there’s much to commend it. With a good clothing and a cooker or candle burning the air in the Igloo actually becomes warm and condensation freezes to the walls so no dripping. The ample space and headroom makes cooking much more convenient than in a tent.

I was a little surprised that there were so few takers for the camping experience, after all snow is not just for skiing! Graham joined me for the actual overnight camp which meant more apple pie and fruit cake each. Chris injured his back so plans to join us on the April trip and Rhona was keen to camp but had to change plans last minute and joined us for the Saturday along with Donald, Andrew and Graham Bull.

We all met at Chisholms car park in Glen Affric at 09:3am0 and headed up the path by 10:00am. It was a little disappointing to find the track snow free given all the snow along the road and in the fields at Gleurquhart and Cannich. However the stony first 300m was not representitive and soon Graham Boyle and myself donned skis at the first opportunity to ski the rest of the track. I guess the snow cover wasn’t ideal since those who carried on walking kept well ahead of us. It was the first time I’d ever managed to ski in before the first deer fence so wasn’t going to back down.

We were all on skis before the second deer fence skiing through the pine trees on a foot of snow. The good snow cover continued along the track in and provided wonderful scenic views ofTom a’ Choinich.

Stopping for a drinks break below Beinn Eun at 11:30 gave us the boost for the climb up Allt a’ Choire Odhar. The snow had formed very steep banks on the west side of the burn and it was a challenge to cross safely with three of us continuing up the East side until an easy crossing point was reached. 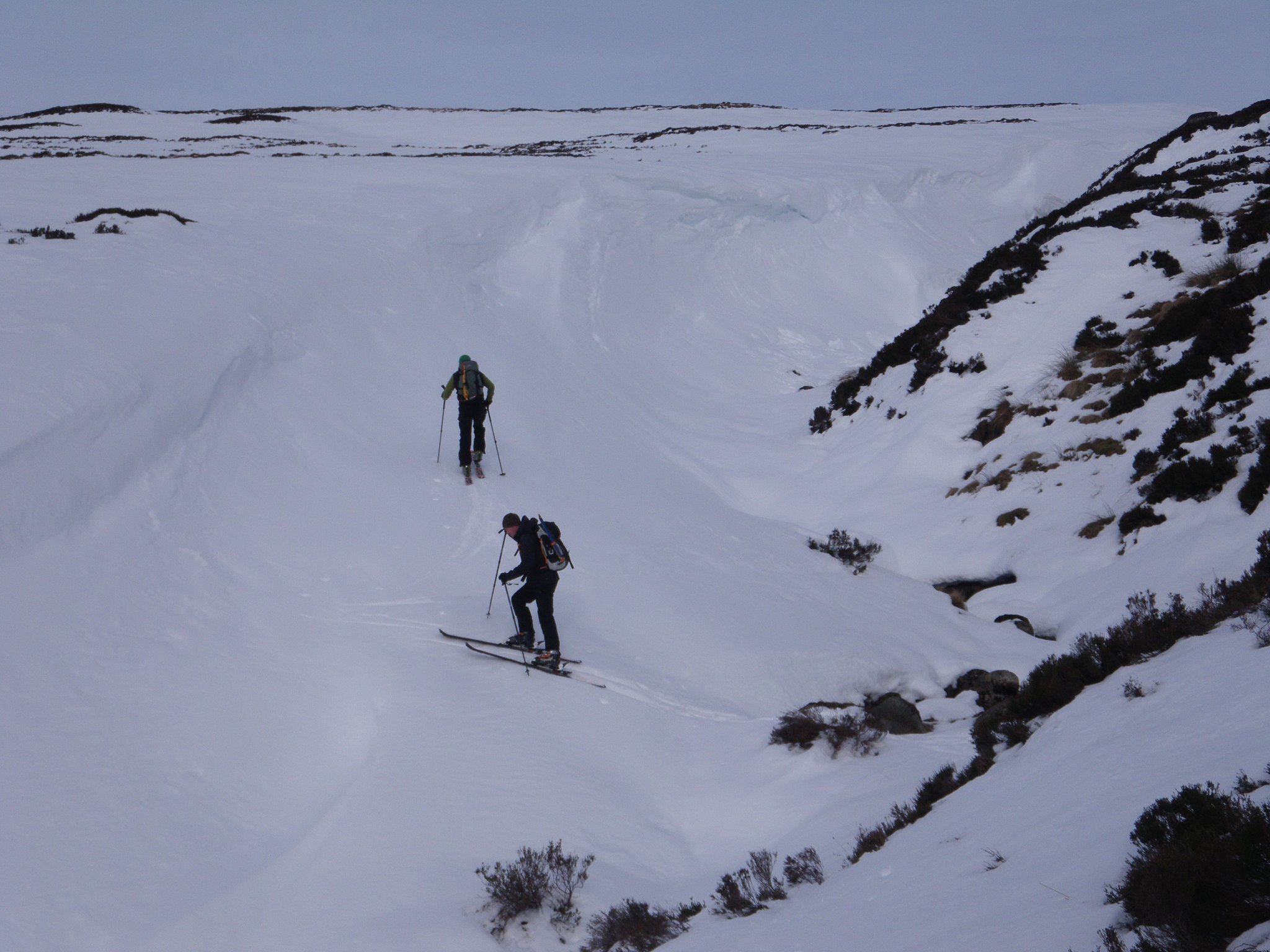 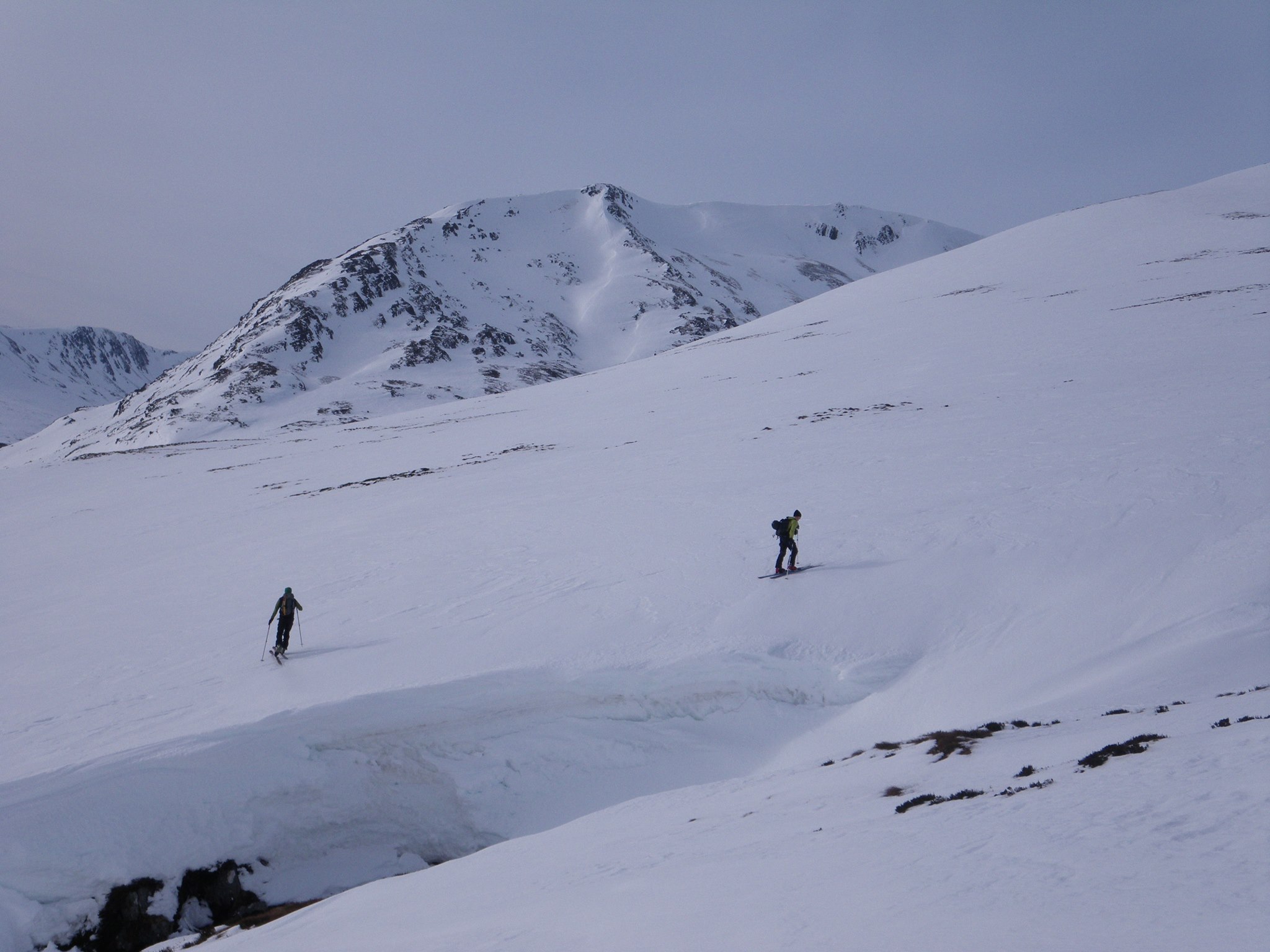 It was decided to build the Igloo in Coireachan Odhar at about the 800m contour. This gave panaoramic views to the South but with some shelter from the North Westerly breeze which had strengthened during the morning. We all helped form the level platform for the Igloo before stopping for lunch. It was 1:30pm when Donald, Andrew and Graham Bull headed off up the hill towards Toll Cregach. Radio’s allowed us to keep in contact and reports coming back indicated conditions were extremely icy higher up. Rhona, Graham Boyle and myself set to with the Ice Box Igloo Tool to build the 8ft diameter Igloo. Good progress was made with the snow being fairly crystalline and compacted allowing quick filling of the mould . To get a good idea of how the tool operates visit the Grand Shelters Web Site. 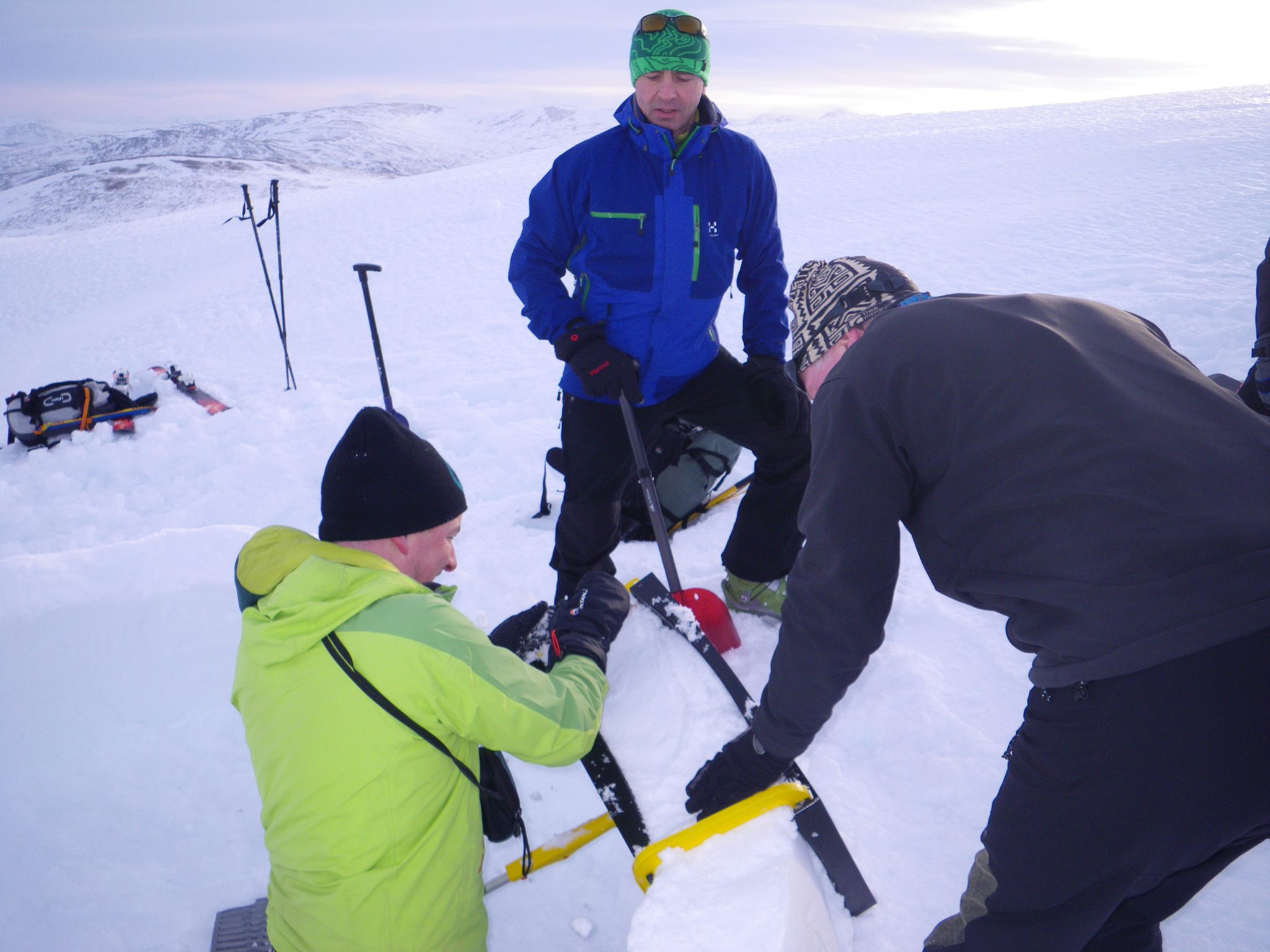 The Igloo was up to the third course of blocks when Donald and team returned from the icy slopes declaring the skiing a bit scary. Using the part built Igloo as a shelter for the cooker we soon had the water on the stove for tea break and snacks. Break over, we then had the prospect of too many helpers overwhelming the block maker. Donald took a spell at this job and was soon getting the hang of the process and building the third round of the Igloo. With time marching on the day visitors decided to head down the hill before conditions became too icy and light faded. The late afternoon sun provided Donald with some great photography conditions, casting a rosy tint across the hills. We kept in touch by radio until the team reached the first deer fence and they had managed to ski most of the route back. 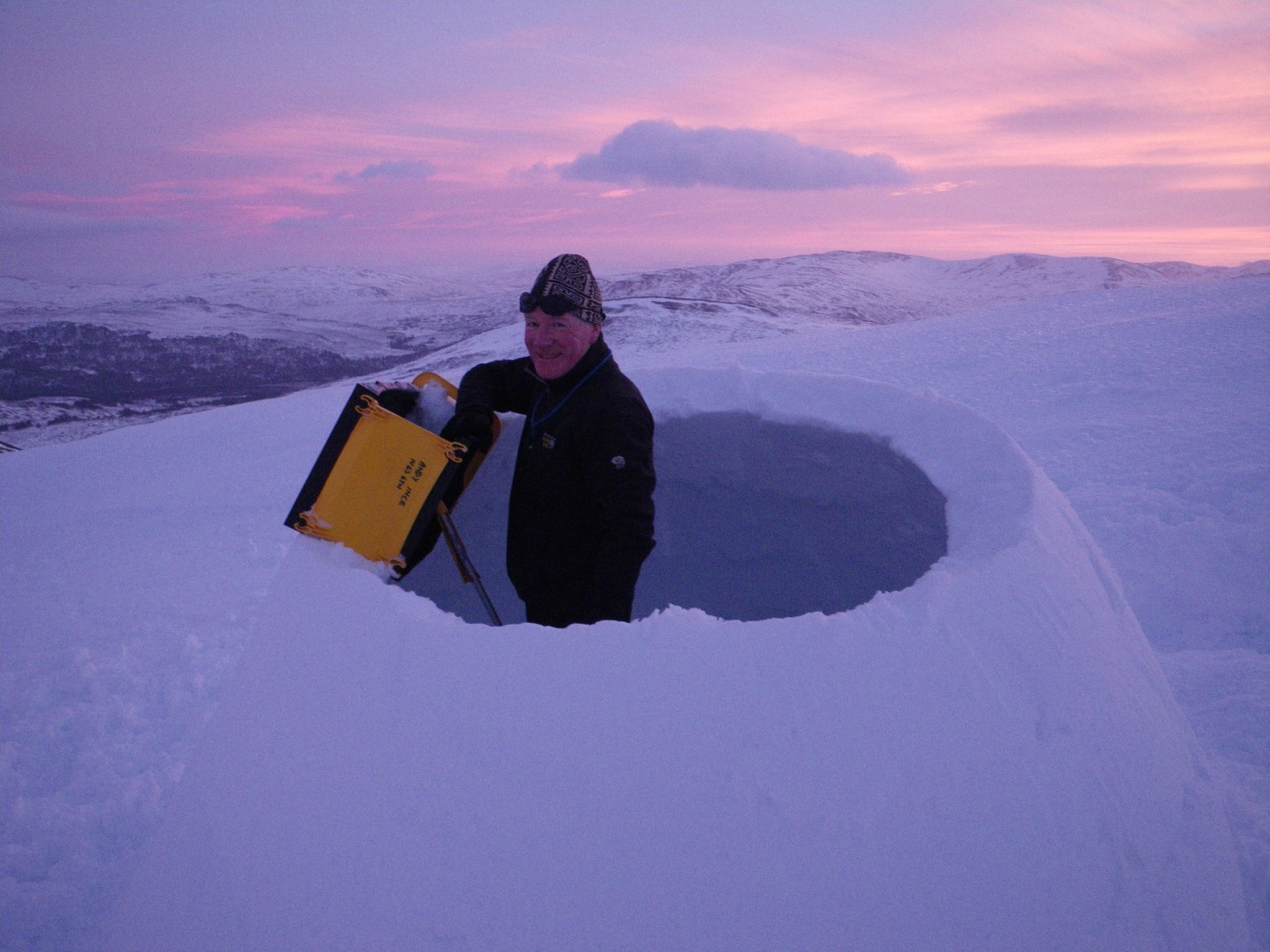 With just two of us to complete the build progress slowed and with another tea break we only completed the build about 6:30pm. It was a very clear starry night so despite the late finish it was a pleasure to be out on the hills with the prospect of spending the night high on the mountain. We decided not to fit the hi viz door cover and allow more ventilation. The trench entrance doorway was facing south east opposite to the wind so there was no problem with any spindrift or draughts. Mats, sleeping bags and cooking kit were soon unpacked and food prepared. Pasta, Mediterranean Bolognaise sauce, grated cheese, spicy Chorizo as main course, Bramley Apple Pies and double cream for dessert, Red Californian Merlot to help with digestion. Fruit cake and Scotch Whiskey rounded off the evening and encouraged us to snooze contentedly after a successful day. 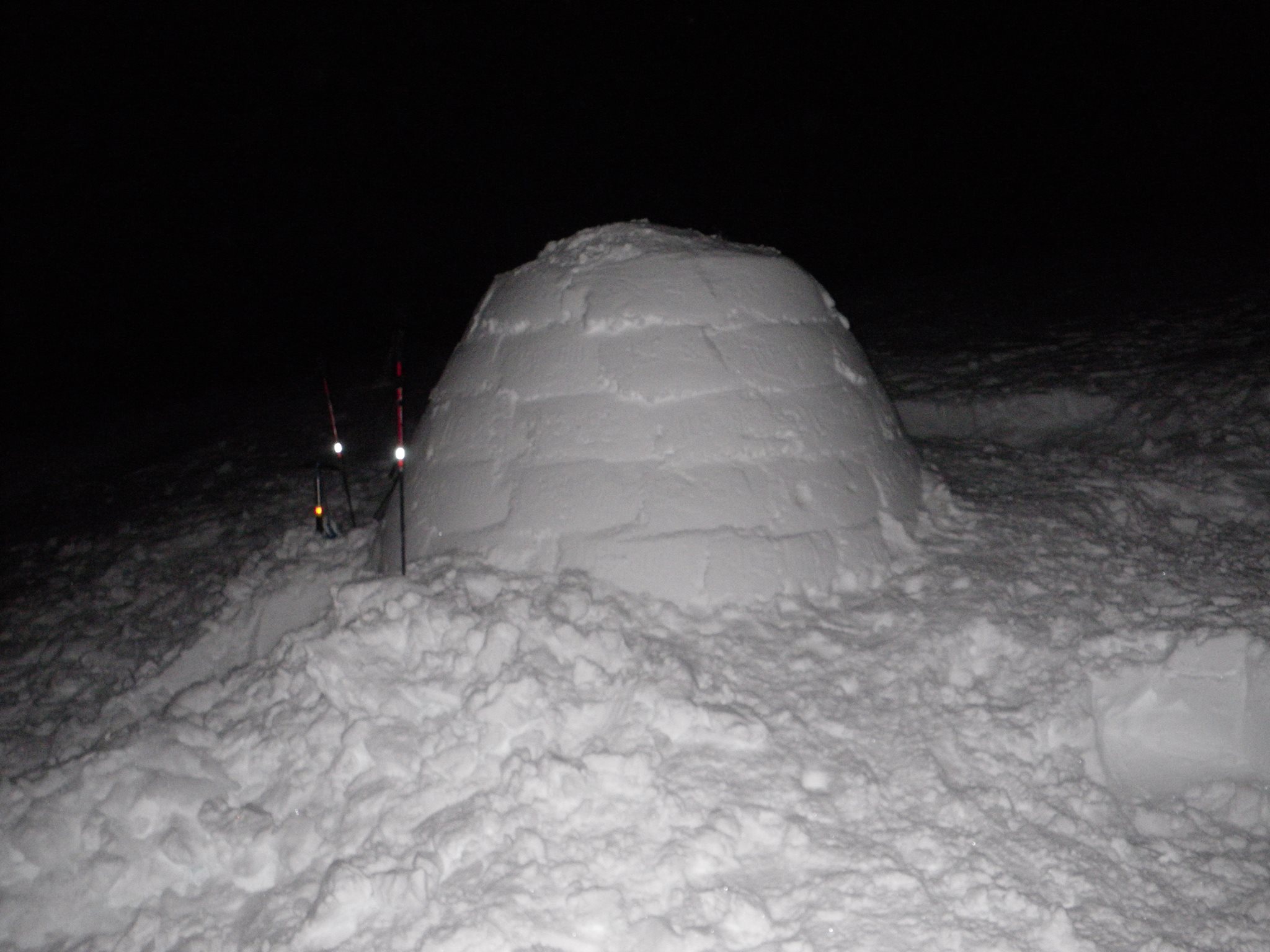 The Igloo insulates very well against cold but also sound so despite the breeze outside the quiet inside makes for a good sleep. It is however essential for any winter camping to insulate well from the ground and we both made use of Thermorest self inflating mats. I supplemented with a short piece of Ridgerest. Igloo Ed reckons that a full length Ridgerest and Thermorest will provide comfort down to -30C so we were well in the comfort zone.

The usual comfort breaks interupted sleep (must have been the tea not our age!) but when the sun started to light the Igloo entrance it was definitely time to get breakfast organised and make the most of the day. I must say that saving and apple pie and some double cream really did make the muesli delicious! 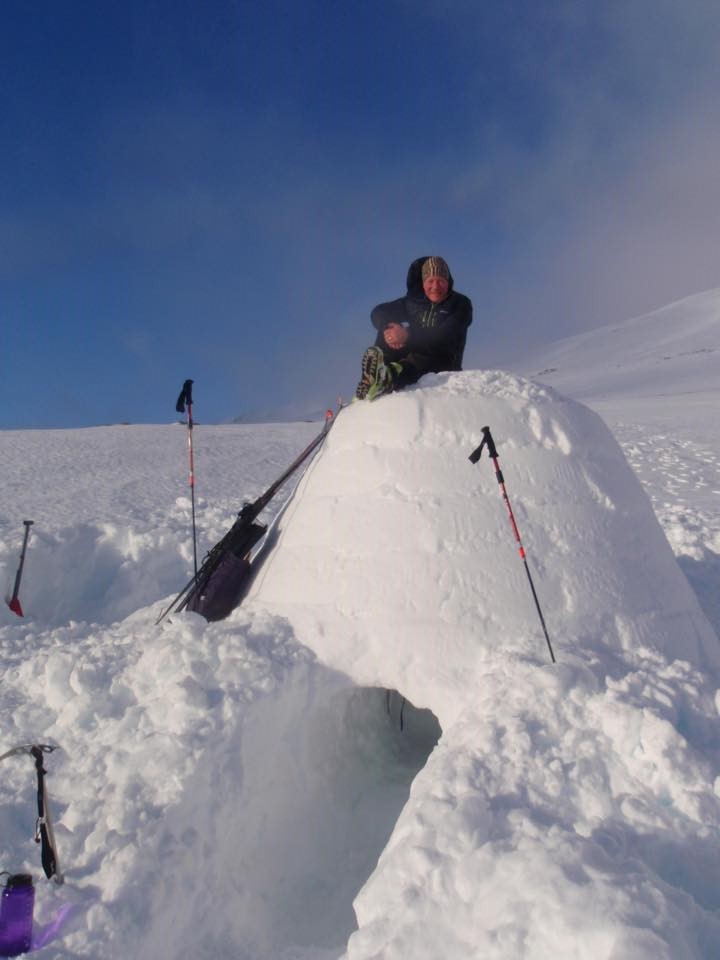 Conditions had warmed up from the previous day and with the wind creating a light spindrift layer skiing conditions were looking good. With very light sacks we headed up to the summit of Toll Easa where the wind was very much stronger and probably blowing at 50mph. It was not a place to stay long so carefully we turned back and as I was still using the skins they helped to prevent me shooting off like a rocket. Once skins were off we very quickly dropped down to the more sheltered slopes. There was some serious sastrugi but these were easily skied being quite soft. 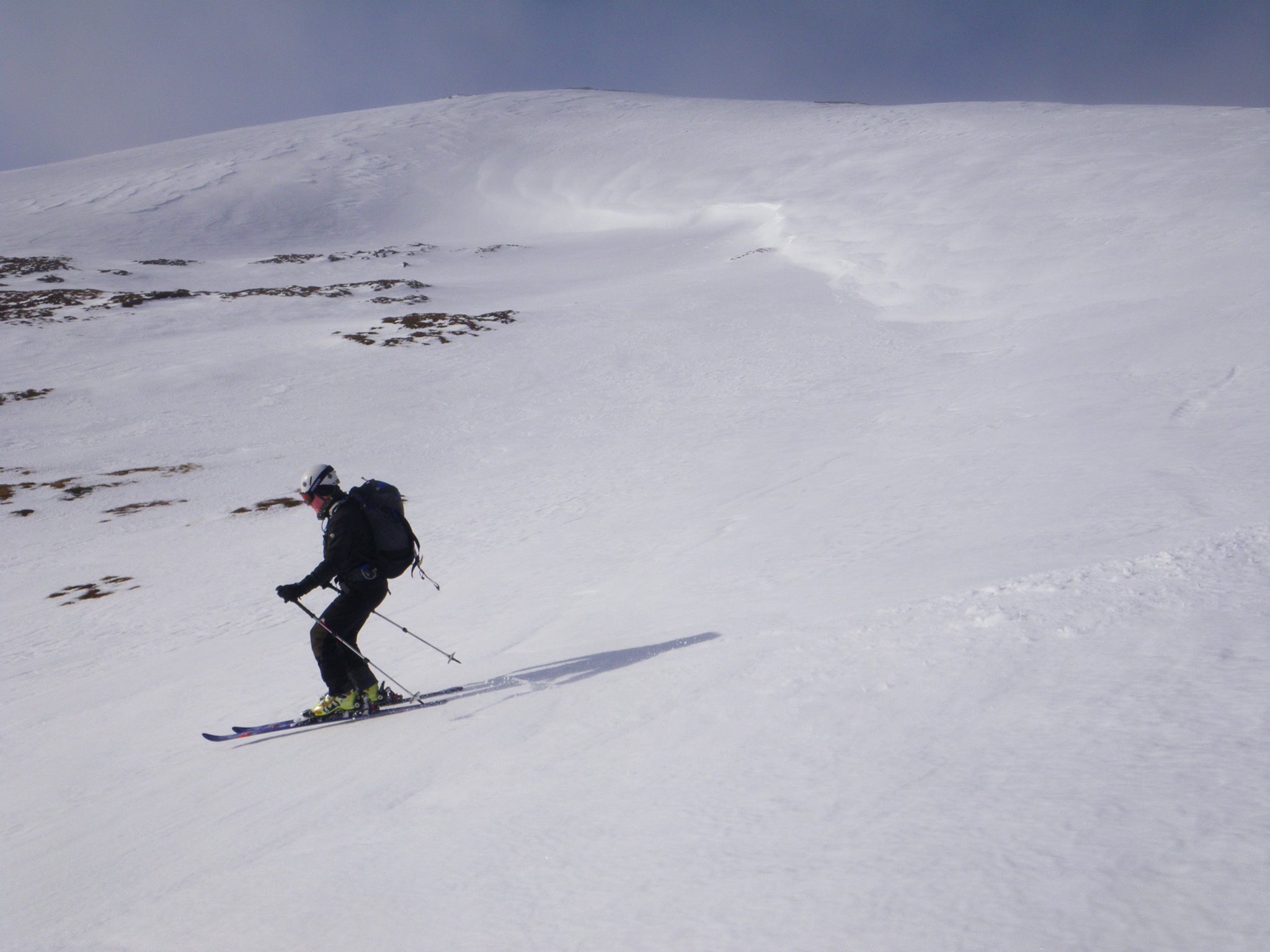 The surface lower down was smooth and even so we thoroughly enjoyed the rest of the skiing back to the Igloo.

Tea and lunch followed after which we packed up the rest of our gear for the descent down to the path. We headed towards Allt Toll Easa where we had seen a large snowfield on Saturday during the ascent. The ground steepened considerably and a slight crust made the skiing a little more challenging. I was beginning to with I’d brought my new skis with NTN bindings instead of my very light weight Fischers and Riva 3 cable bindings. 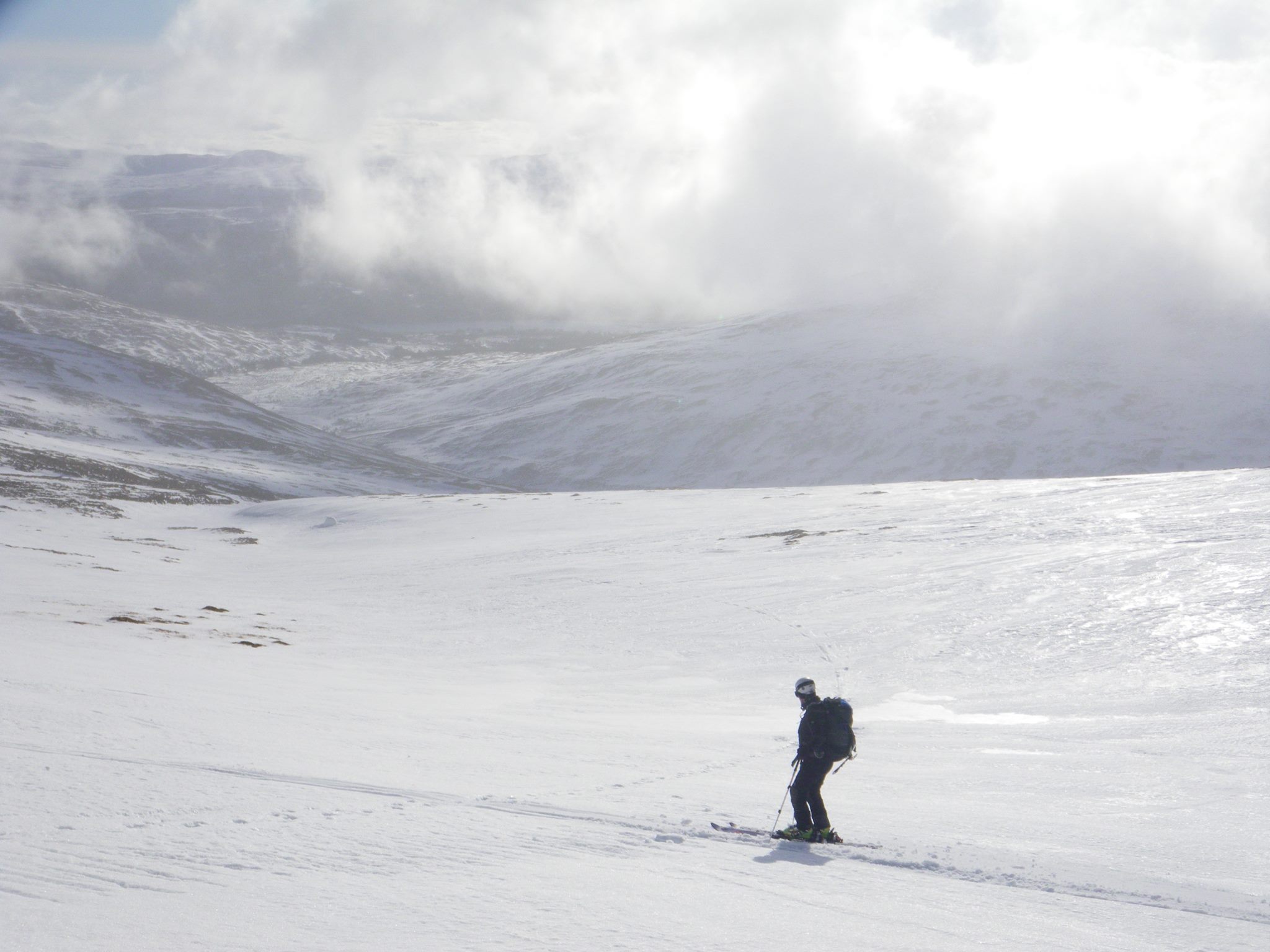 The ski down was all over too quickly and the final challenge was to ski out as far as possible. I was determined to make the first deer fence and with old skis this was a fairly easy task. Graham valued his skis more so decided to walk about halfway between deer fences.

The final walk out was on the stony track but with so much distance skied it was no effort compared to my previous trip in December when the walking distance in total for the day was about 6km. I know Graham enjoyed the camping and I hope that I’ve inspired others to try out the Igloo experience. Let me know if you’re interested in the next trip.