A large group assembled at Àite Cruinnichidh (the gathering place) in Glen Spean on a snowy and wintery evening. Spirits were high and everyone looking forward to some great skiing out on the hills.  Unfortunately the weather decided to come along too and brought some very high winds. In fact, the conditions on the Saturday were some of the wildest any of us had ever skied in.

Despite celebrations the night before, everyone was up and ready on time for the day’s challenges. There were two plans of action; one group went to Meall Clachaig and the other group continued with Plan A and caught the train to Corrour. There was some unease in the party as the snow was deep and whilst snow plough trains were spotted going up and down the line, there was always the chance that the team would get to Corrour but be unable to get back thus forcing a long and testing ski back over the hills in very challenging conditions. We missed out on that though. 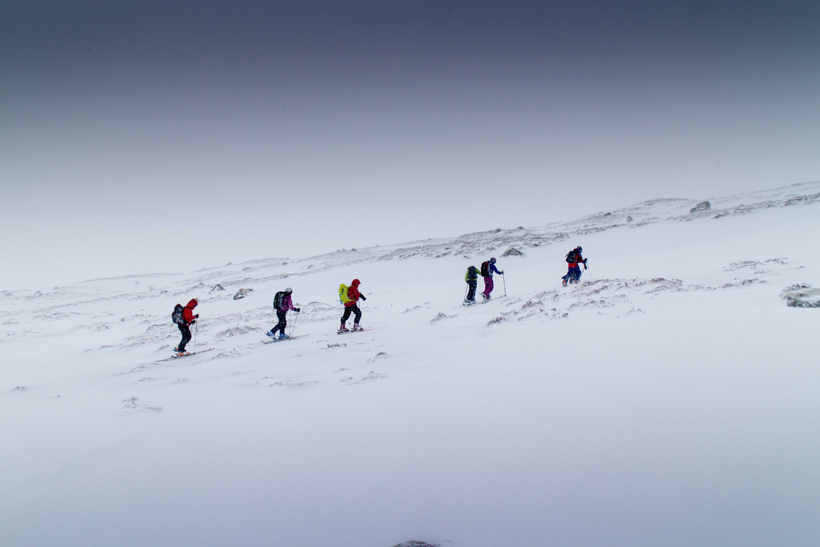 Arrival at Corrour was special, and windy. Two groups formed and aimed for Leum Uilleim to the west of the Station. Peter led one group on a contouring route round to the south hoping to escape those northerly winds. Another group made a rising traverse in the same direction but higher up the hill. The great thing about Leum Uilleim is its terrain which is varied and provides sport enough for anyone. It looks rocky but there are lots of dips and hollows with great features for skiing. 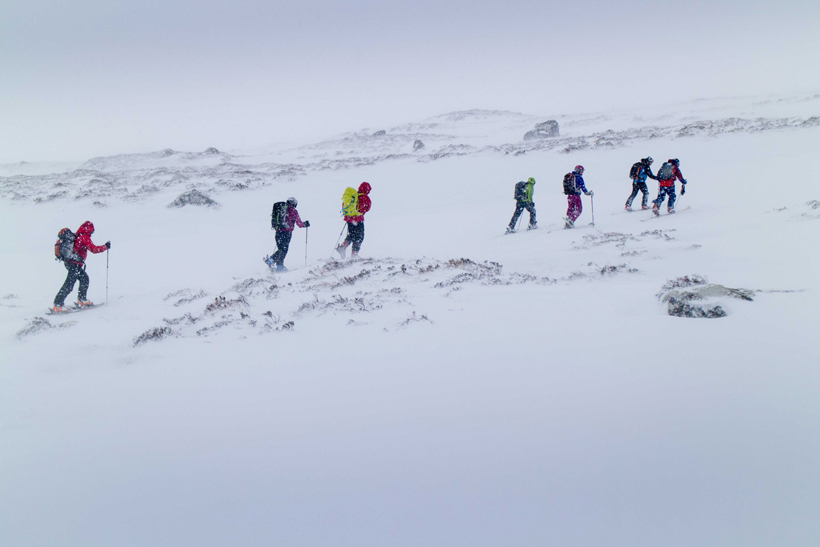 As altitude increased, so did the wind. It’s hard to explain just how strong the wind was. Everyone has been out in tough conditions and the pictures make it look fairly normal for mid winter. MWIS said gusting 100mph and everyone had difficulty staying on their feet. The danger was in the falling and injury potential. Some of the party had real difficulty staying upright. 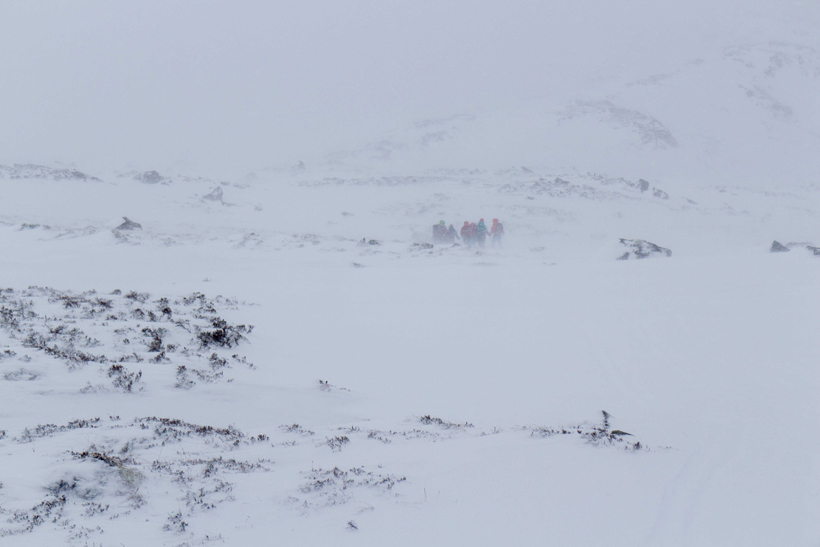 Matt and Gordon decided to make a dash for the summit which was by all accounts extremely challenging. The rest of the higher up party skied back over the gullies and humps to the Station. Fun it certainly was and the wind reducing to hurricane force made it even more pleasurable.

On arrival at the Station bothy we met members of An Teallach Mountaineering Club. These were the vagabonds that deprived us of staying at Loch Ossian, cheekily booking the place before we did. Some good natured banter followed and they invited us down to the hostel. No one said it, but we all knew that this weekend had been claimed for IBSC. No one nodded in agreement. 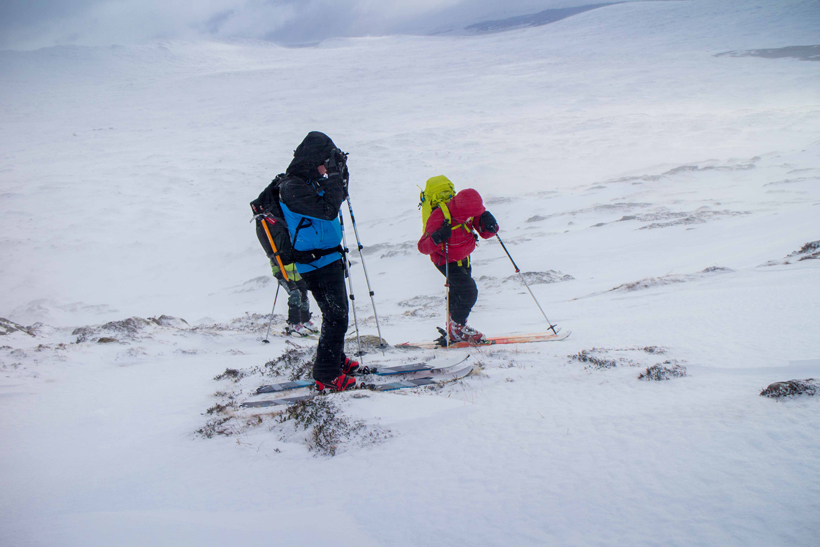 The purchase of Club radios had generated some high energy discussion before the trip but they proved to be very useful whilst on the hill with different parties able to speak with each other through the hurricane force winds. “Pushing them hard” was the message back from the President when he informed us that it wasn’t certain they would make the train back north. They did, by five minutes. “Corrour delivered” he exclaimed. 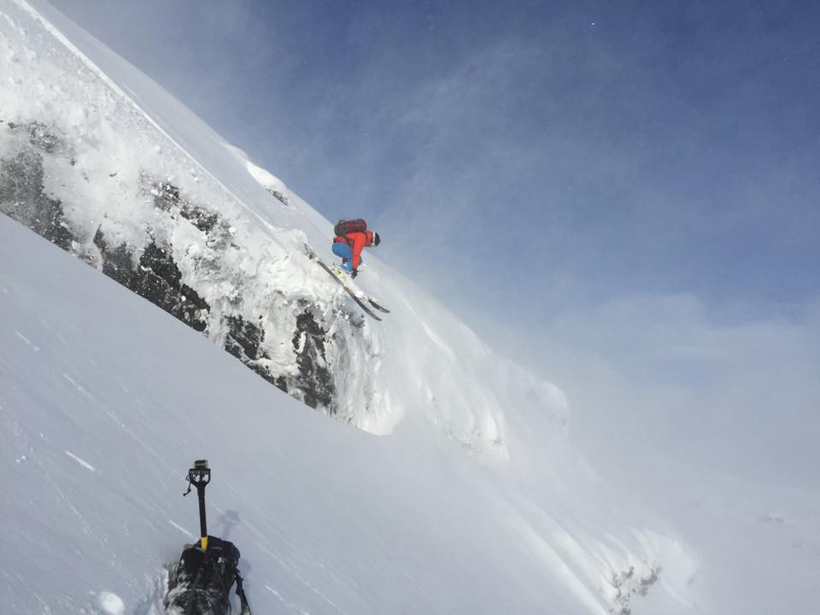 Train on time again and we were all nearly aboard only it went past the station and then reversed back. This caused some excitement and not everyone heard the explanation so here it is. Apparently, when there is snow on the line, and there was about two feet on this occassion, the train passes the station and clears a path forward. Then it reverses back on to the bit it’s just cleared so it can gain traction on the rails to get going again. Remember that for next year.