By Mike Cawthorne. On the edge of Dalwhinnie in the black of a winter’s evening Troy, Donald, and myself grappled with the perennial problem of how to attach skis, boots and an assortment of overnight gear to the frames of our bikes, and maybe forgetting that panniers, pouches and packs have a finite capacity however cavernous when empty. A rolling start was needed and our bikes under the strange glare of torchbeam and weighed down with shoddy appeared bloated and misshapen, as if we were itinerant merchants who would shout our wares at passing crofts. Or Castles.

We passed beneath the turret of the gatehouse and bumped over the cobbles then Donald led the charge along miles of track by Loch Ericht, coaxed by an east wind that had us freewheeling on the flats. In no time we left the grand lodge and loch and began grinding up to the open moor. 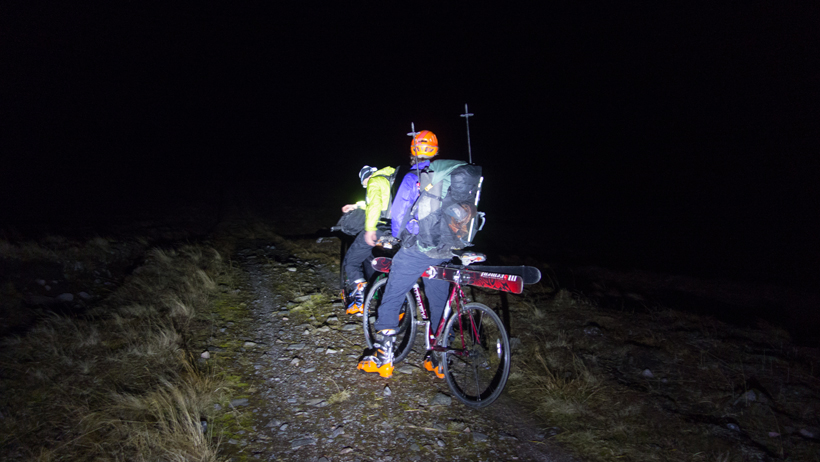 The wind shoved us along the last rough miles of a stalkers’ path to Culra bothy. Knowing the bothy to be off-limits we’d brought tents and a bivy, and set up camp on an alluvial plain by the burn.  A brew, some bites, and now wrapped warm in our bags and about to engage in eight hours of well-earned rest, Donald cried out, ‘What if the burn floods during the night? Thanks Donald. 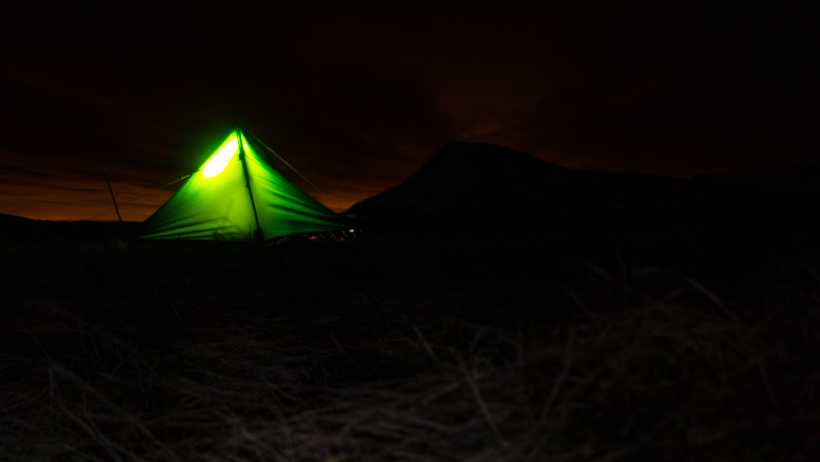 We awoke to a glaze of frost and the surrounding hills shaking off early morning cloud. Ben Alder looked stunning, its corries seeming to groan beneath the weight of winter snow, but we had to reach them first. 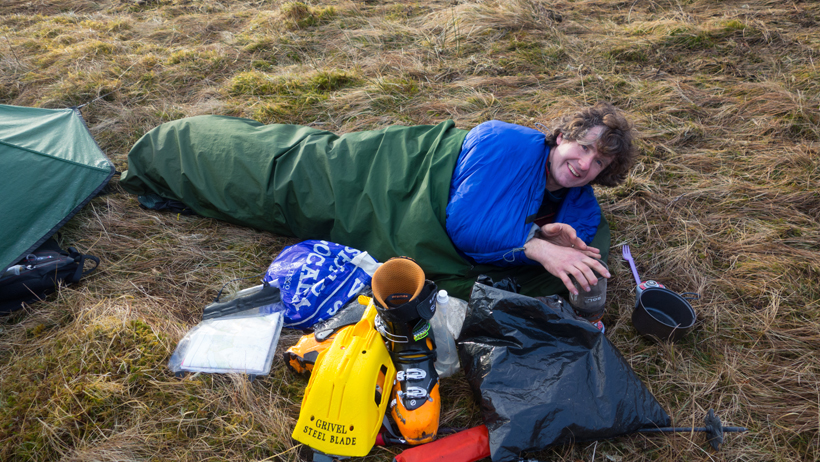 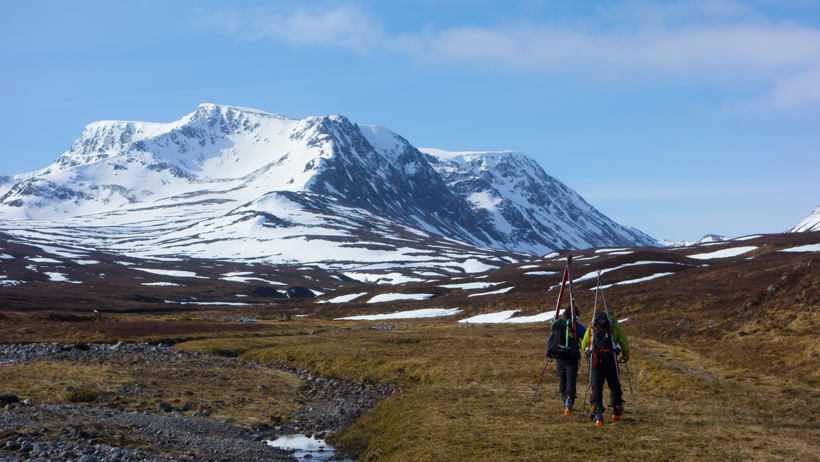 We traced the burn uphill and where it divided and narrowed we crossed. Some tumult here. A lot of melt was coming off the hill. Our plan to attempt a complete traverse of Beinn Bheoil and Ben Alder was not possible as the lower west-facing slopes had been scoured of snow, so we skinned into the great corries of Alder, the sun now beating down, linking the lower fields and reaching the frozen Loch a’ Bhealaich Bheithe. 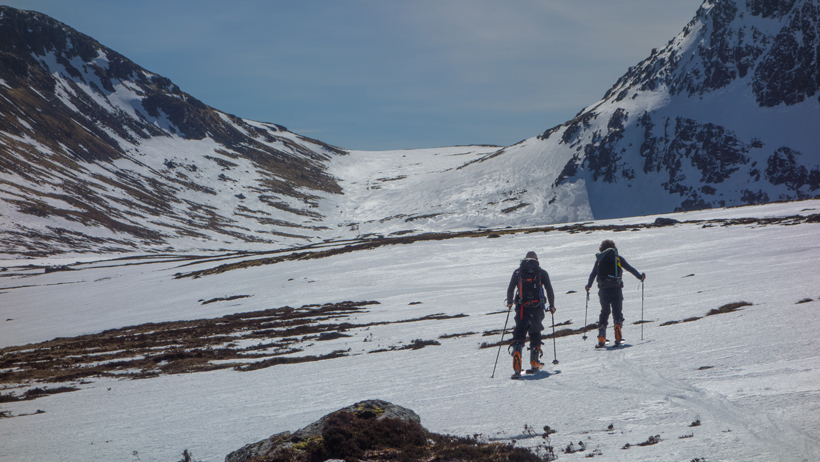 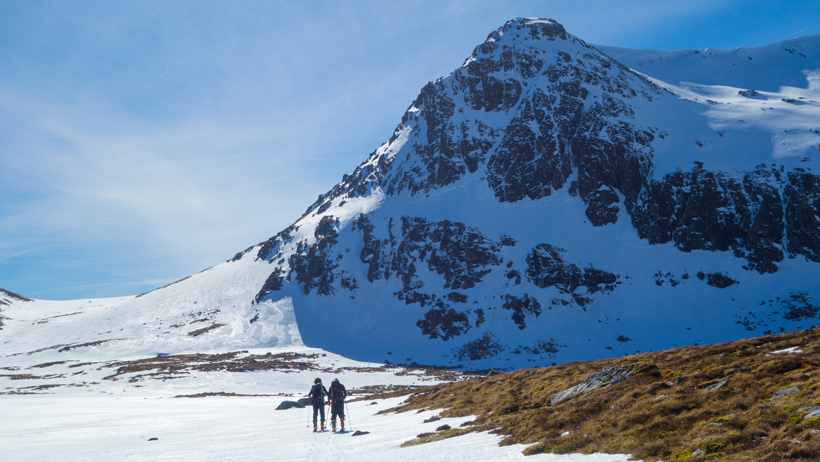 Time to rest for a moment, apply a little more sunbloc, and register what we could of this magnificent place. Listen to the silence and gaze up at the corniced rim of Garbh Choire that reached half around our orbit, its cliffs and ice architecture draped in noonday sun. Troy’s first visit to this sanctuary in winter and he was suitably awed. 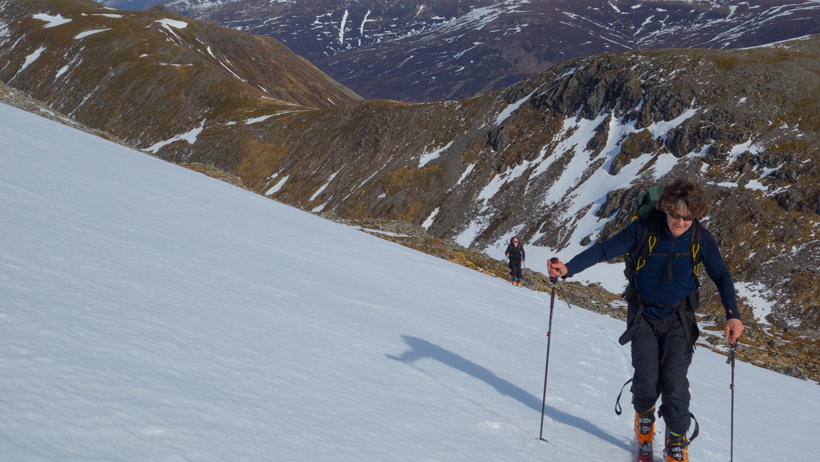 Donald led east around the loch, into the icy shade beneath some great cliffs, and steeply up to the bealach where we one and all dropped and lay spread-eagled in the sun, lunching and drinking, then a little recovered we pointed out familiar hills – Cairngorms, Schiehallion, Ben Lawers, Ben More and Ben Lui to the southwest. 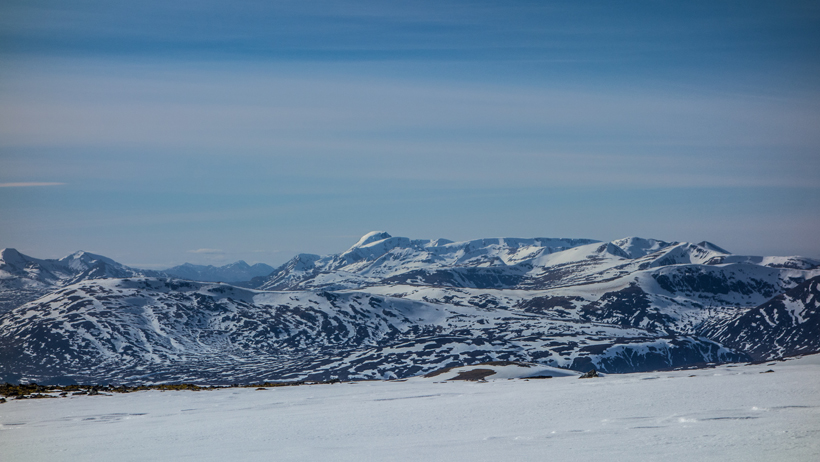 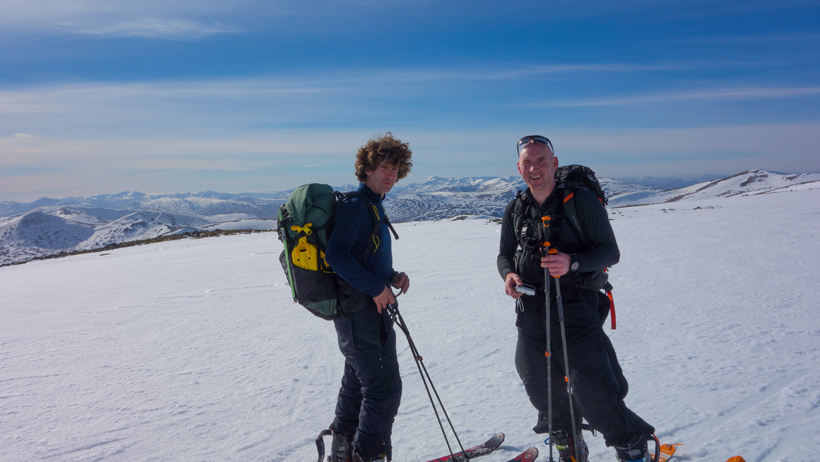 A steep skin-up to the plateau then along the corniced cliffs to Ben Alder’s summit, one of the remotest spots in Scotland and probably its best viewpoint. Lochaber and the Northwest opened up and I reckon we could see half the Highlands.

At first we skied to the plateau’s edge to take a peek at the Short Leth-chas, a possible way down. The prospect of a very steep and icy downclimb to reach the ridge was a little daunting, especially as we had only one pair of crampons between us. We returned the way we’d come. A great choice. 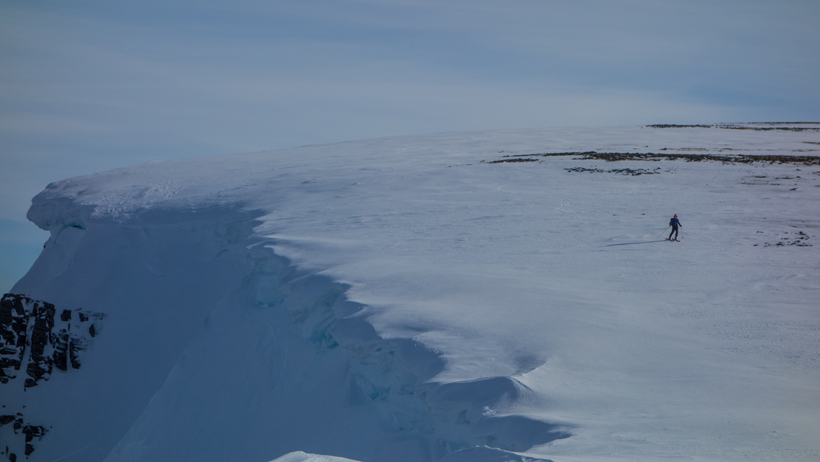 Once we’d skinned back along the corniced edge we plunged 300 metres vertical to the bealach. 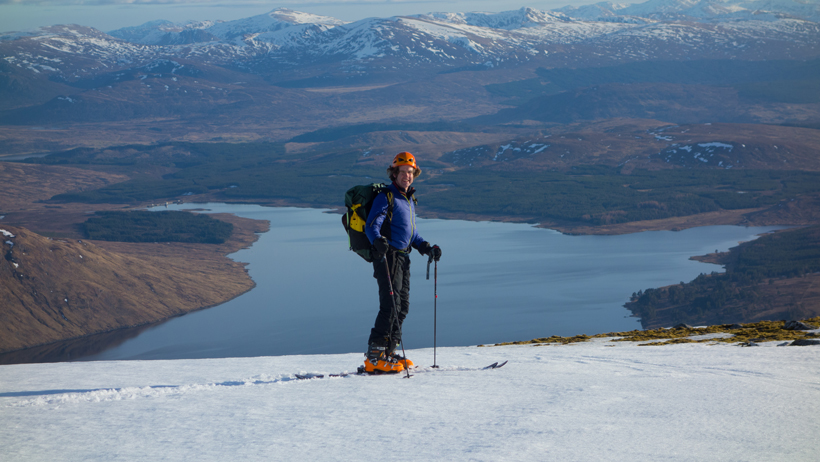 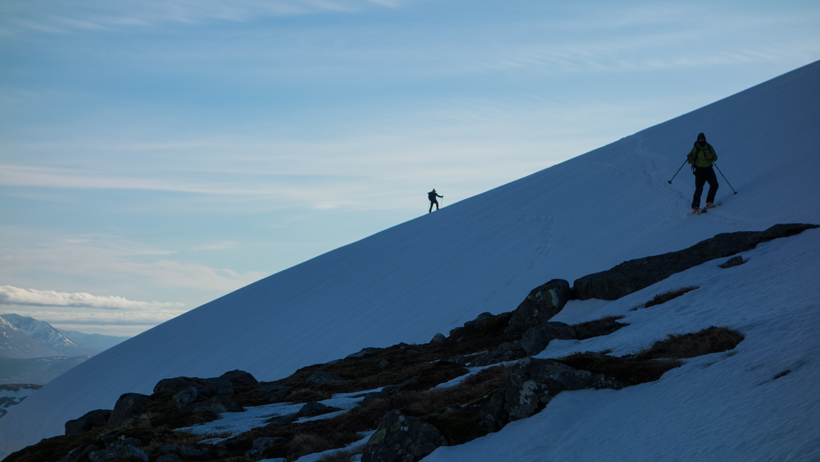 We blasted down to the loch and skated its fringe to keep momentum and cruised the great snowfields below the Leth-chas and finished almost where we crossed the burn that morning. 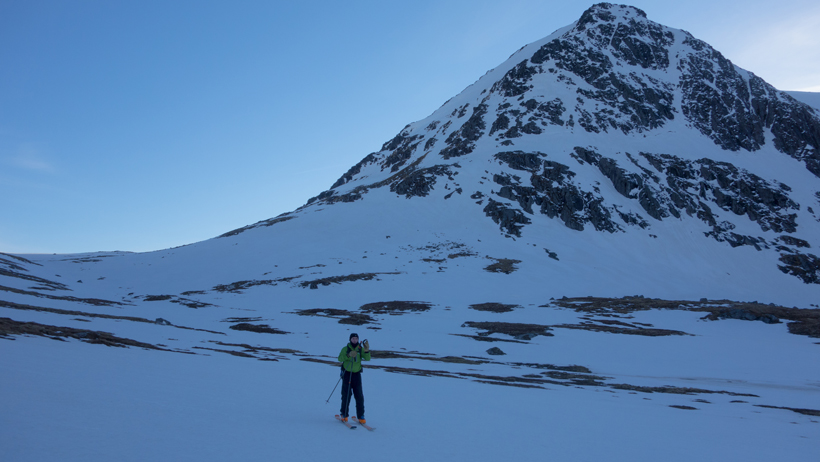 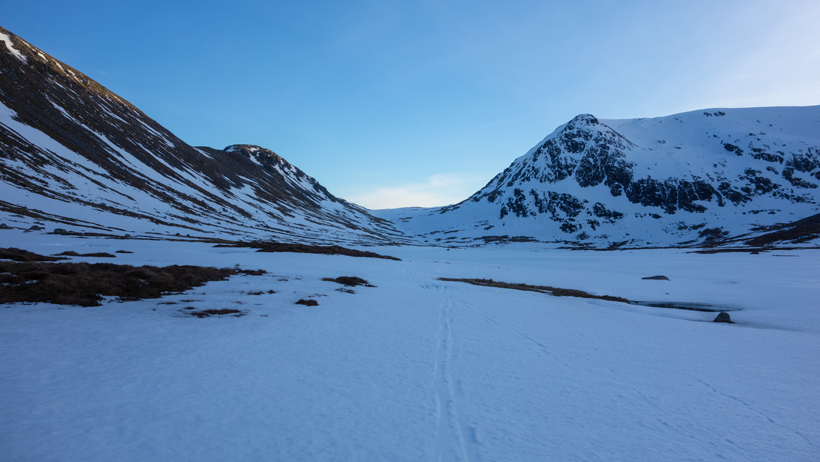 Nearly 700 meters of descent. Magic. And the sun never stopped shinning. The one thought as we clumped the last mile in ski boots was Troy’s much lauded chicken curry. 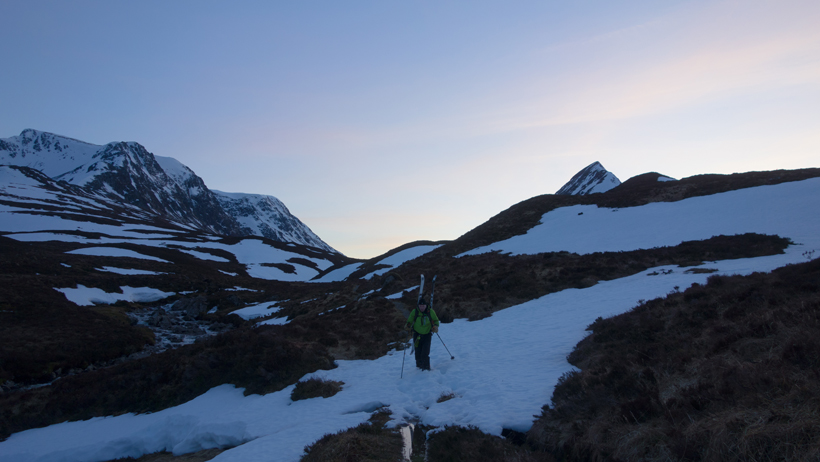 To keep it cool he’d buried in a snowbank by our tents. But would it still be there? It was. 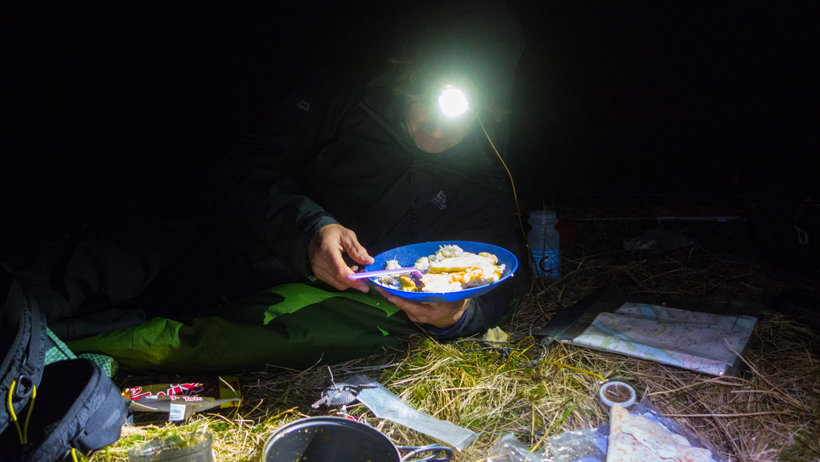 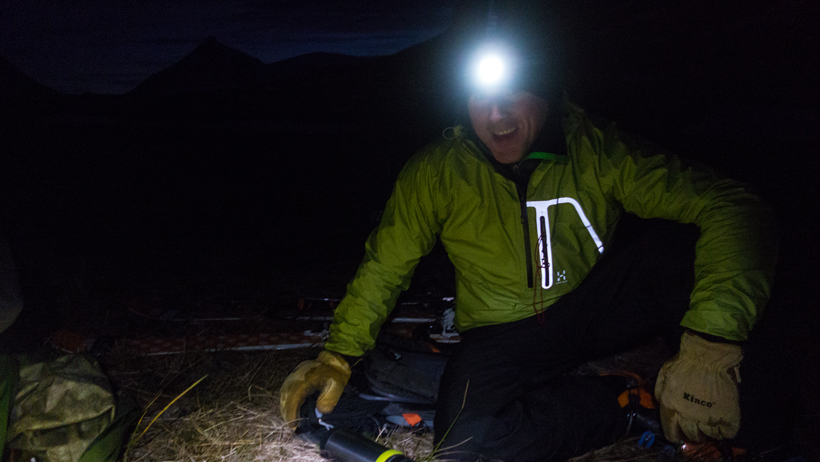 After a near ten hour day our taste buds were tingling at the prospect. As darkness fell we chewed over an incredible day’s skiing – sun, scenery, great company, it had everything. And the curry was exquisite. 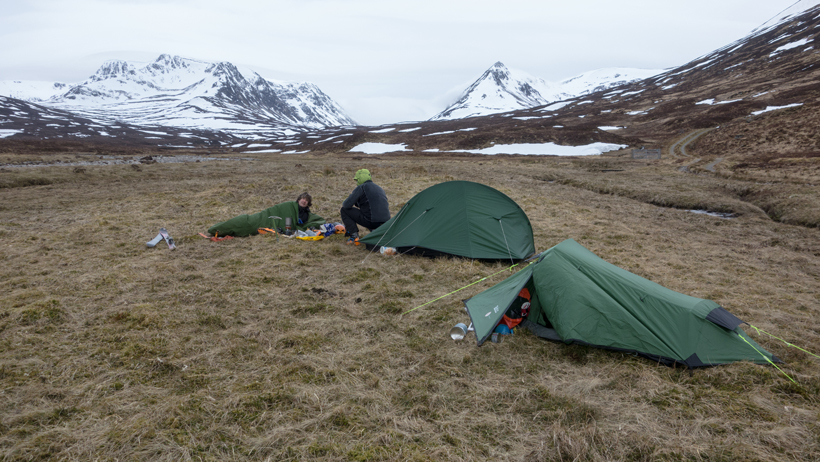 A grey and overcast morning, and a little leaden legged after yesterday’s exertion, we turned our bikes and bounced back along the path and leathered it along the lochside, working up a great appetite for a late breakfast in Aviemore. 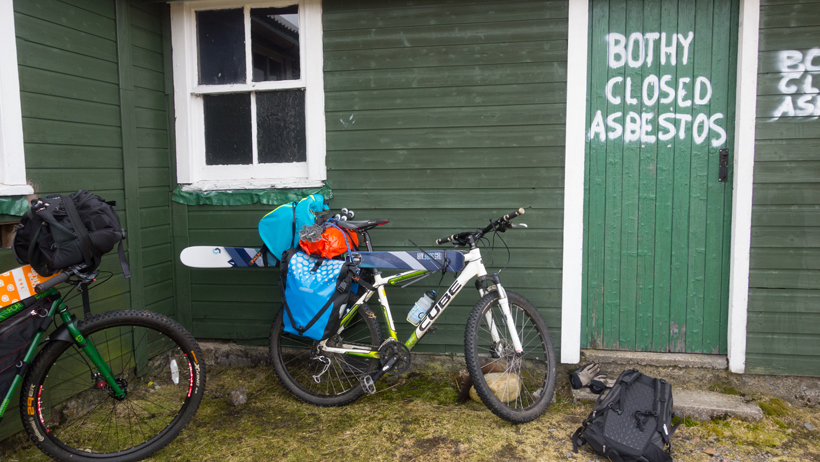 Mike is a professional writer.  Find more of his writing here.