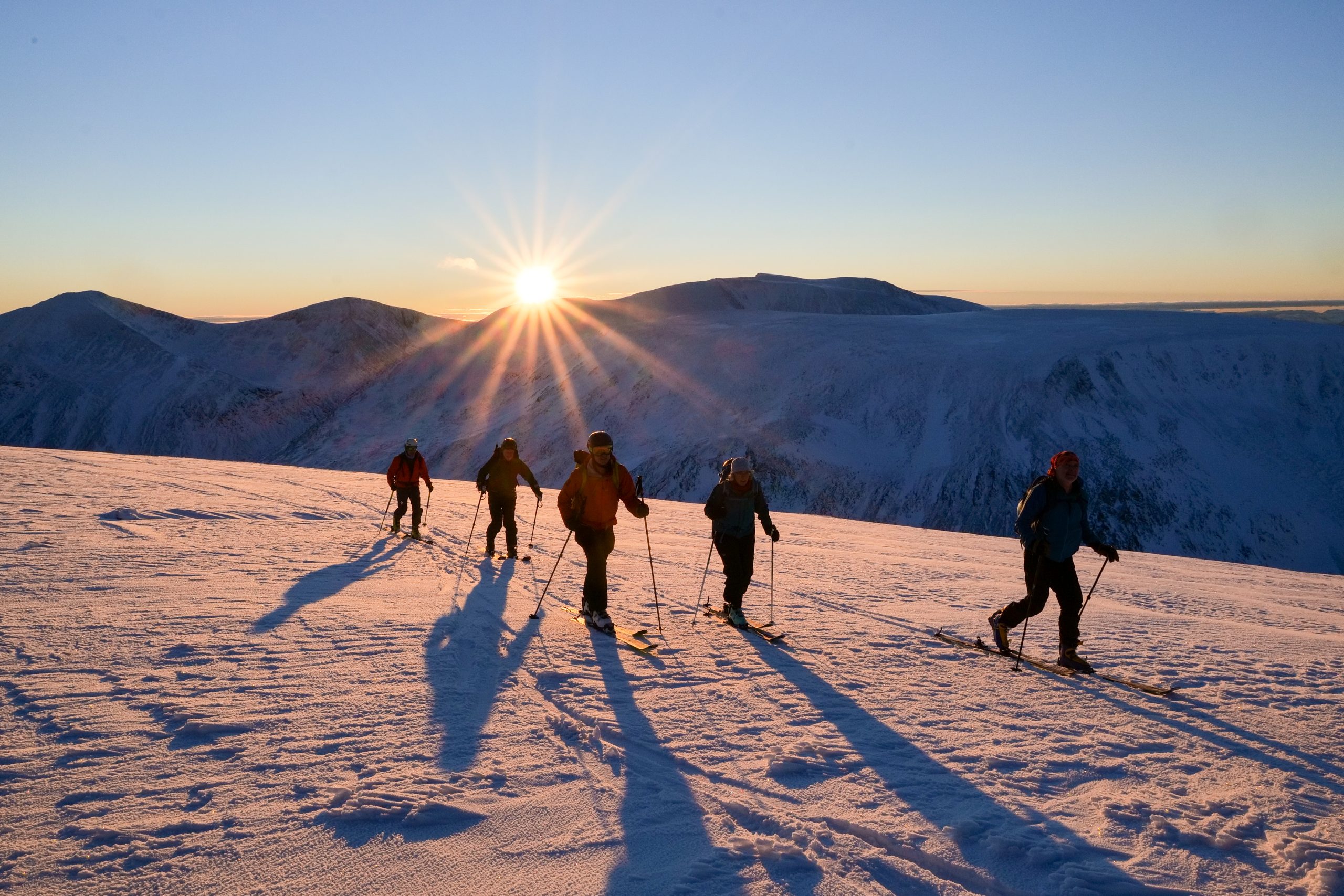 It was with low expectations of boiler-plate ice and banks of cloud that the group of six gathered at the Cas car park, with Al’s full-ceremonial presidential Dynafit robes providing a welcome splash of colour against the stark outline of the Snow Factory.
With introductions out of the way, we made our way through large numbers of future little IBSC members gathering for lessons on the nursery slope and set off up well-trodden paths to the summit of Cairngorm. Skis were brought into service at the mid-station, with the promised ice and clouds nowhere to be seen. Spirits were high, although some of us were rueing including that extra bit of kit in the previous evening’s neurotic packing frenzy.
Mother nature provided a fine ice sculpture at the top, disguising the man-made infrastructure, while the random assortment of tourers at the summit were all in agreement that the weather and views were both spectacular and unexpected. Negative Lateral Flow Tests had been confirmed the previous evening, but there was little flow about the skiing down into Corie Raibert. Thankfully no hospitalisations, but a few of the party were certainly laid low by the crusty conditions underfoot. A first-trip-of-the-season cock-up was duly provided by Archie who had forgotten to adjust his bindings to his boots, however thankfully a small swiss army knife had been included in the aforementioned packing frenzy and the day was saved. 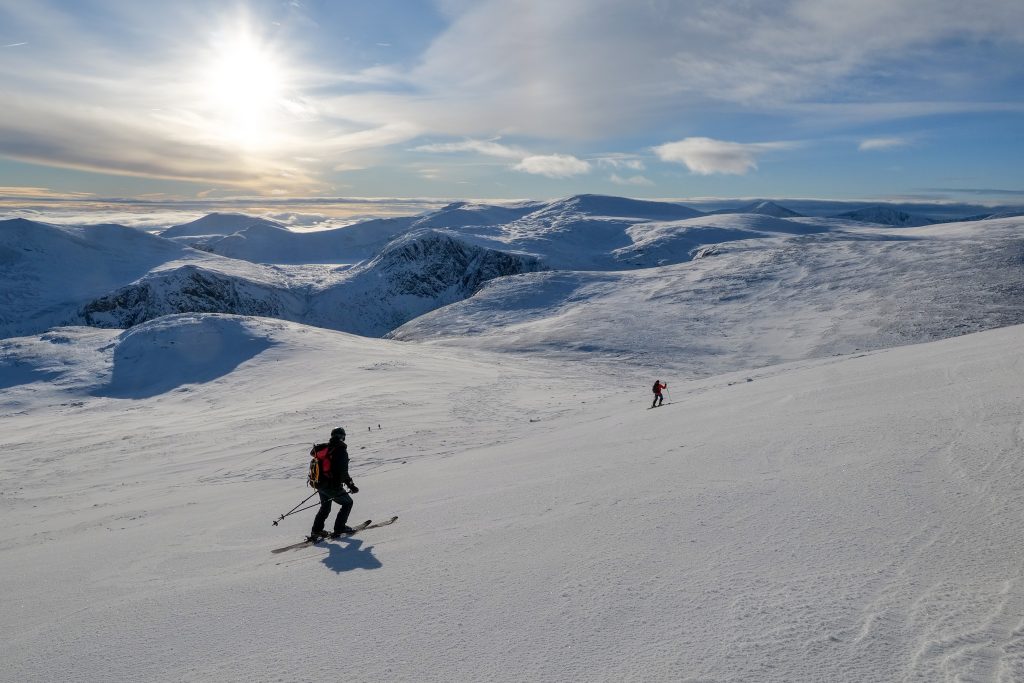 Back onto the plateau, we made our way towards Macdui under splendidly benign conditions, admiring the views from Ben Rinnes to the Affric mountains and Ben Wyvis. (Mountain identification being provided by the infallible Todd Mountain Information Service. Thanks Al.)
With the sun beginning to dip low, a head-torch count – 10 in total, I believe – was conducted before making the “20 minute” trip up to the north top of Macdui. “Todd time” proved to be less reliable than the TMIS but the views were nonetheless spectacular and, besides, the real enemy was not the fading light, but the lurking lumps of granite which caused some problems for skiers and ski bases alike. The ski down was nonetheless excellent. 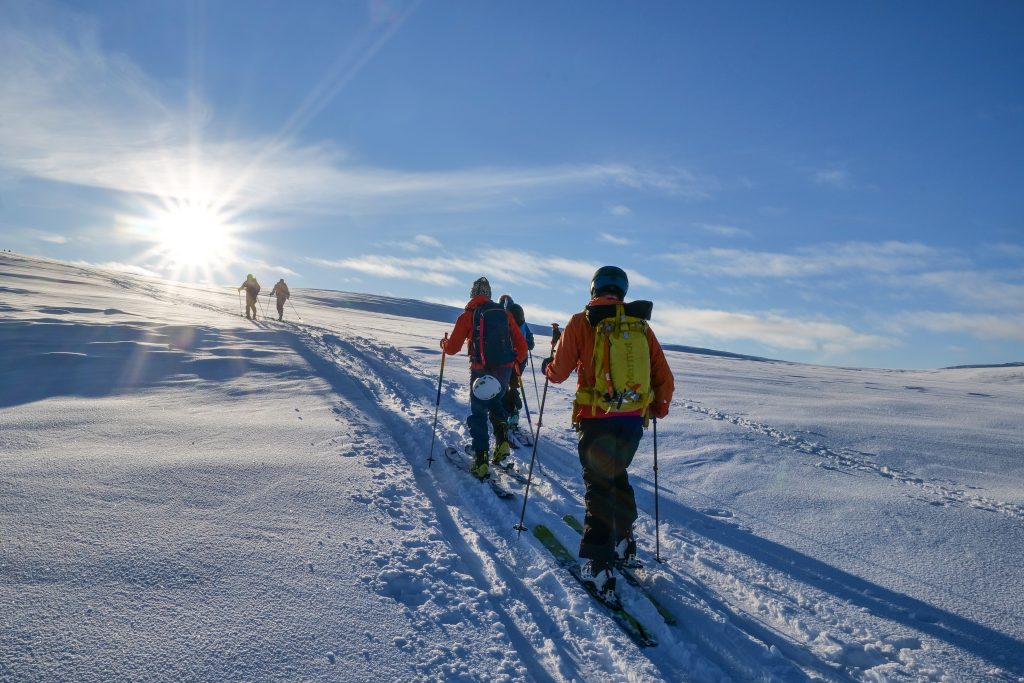 Looking homewards, Cairn Lochan was a much more appealing prospect than retracing our steps over Cairngorm, so off we set over the rolling landscape in ever-changing light. Behind us, a band of mist was forming around Ben Macdui as if the Old Man was reclaiming the mountain for himself as humankind retreated North. 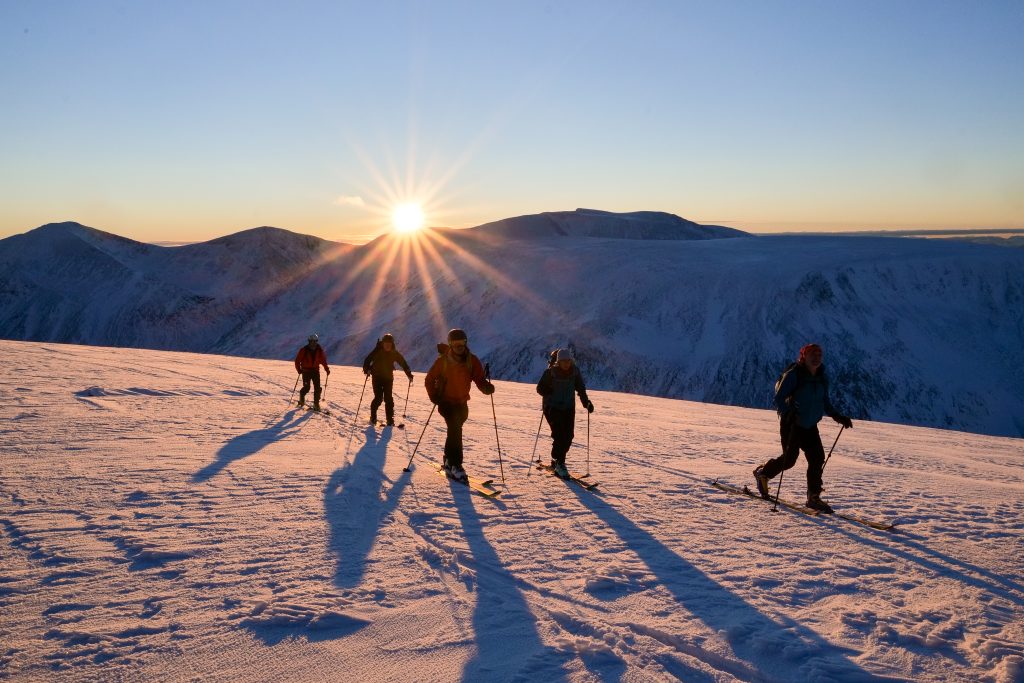 Heading back over Cairn Lochan as the sun sets over Braeriach

A fantastic rock-slalom descent down to the West left us surrounded by fading light and pink-tinged tops. An “enrosadira” which truly would have done the Dolomites proud.
Each of us donned a headtorch from the ample selection available and off we set down the well-worn path. What could have been an end-of-day trudge was made pleasant and interesting by the dimming light, the clear, starlit skies and the twinkling headtorches of the poor buggers still descending high up on Cairn Lochan. 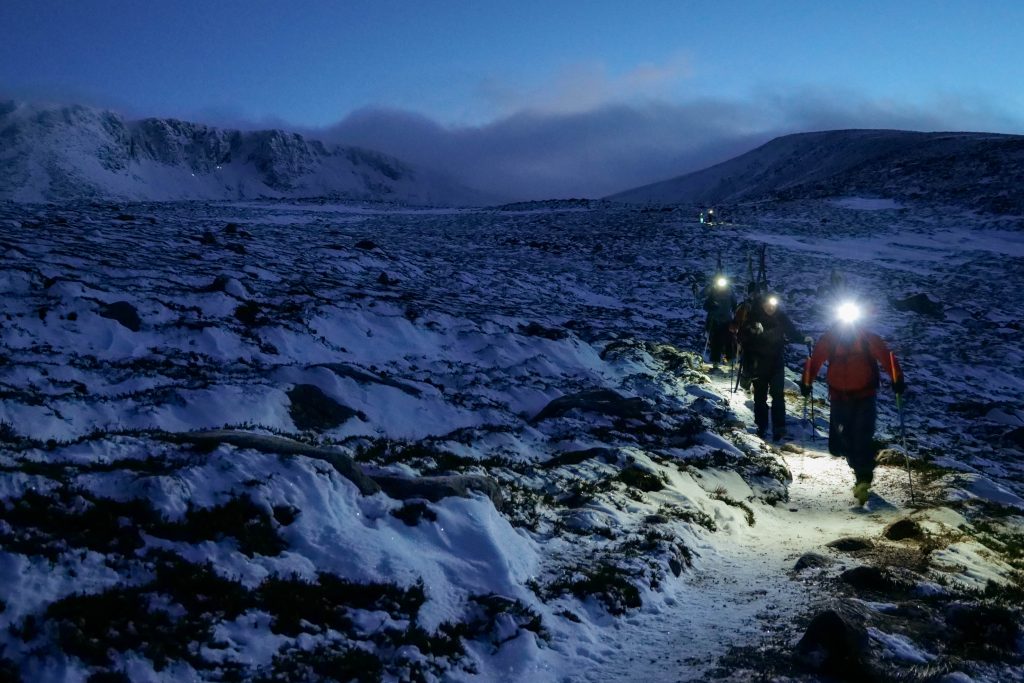 Unfortunately the council gritters hadn’t made it as far as the track which provided the forecast icy descent. A few slips were had on the way down and a couple of icy footbaths taken while slithering across the Sneachda burn, but all emerged safely into the car park to reflect on a day of unexpectedly good weather, stunning views and excellent company.
Back on the road in time for the 6 0’clock news, the forecast was for rain and near-record temperatures of 17 degrees on the South coast. Who knows, though? They might be wrong again… 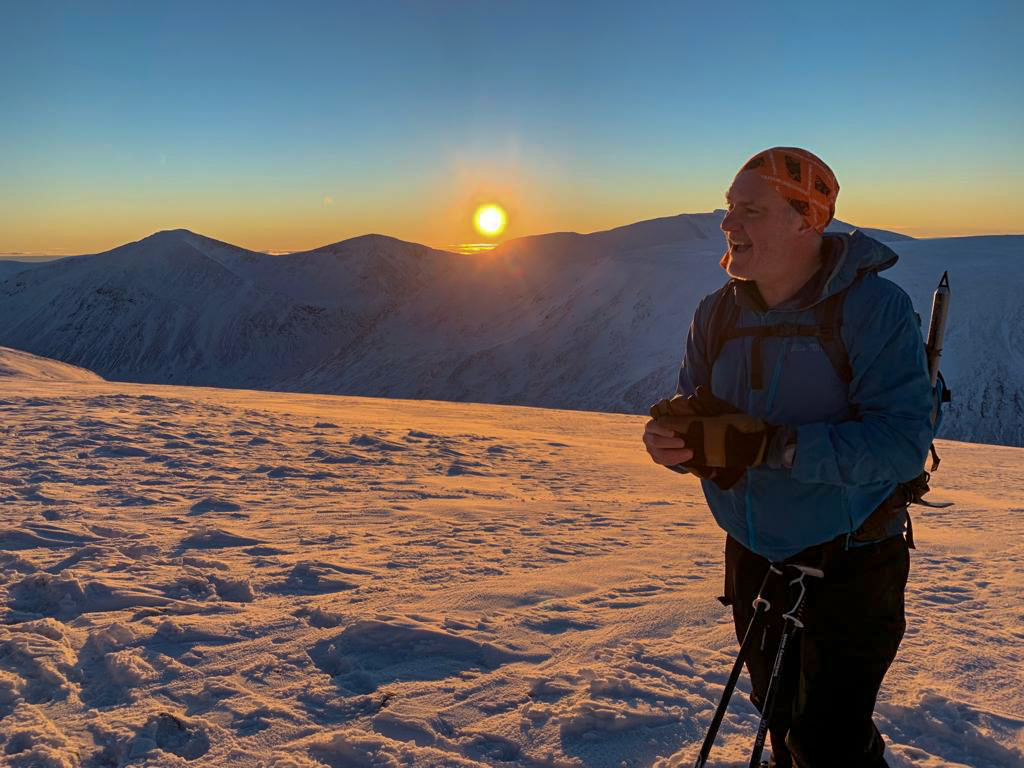