By Mike Cawthorne: ‘Champagne and Powder’ was coined by a budding wordsmith on the committee, a weekend tucked away at a remote hunting lodge in the heart of the Highlands. It was much anticipated, especially as high pressure had clamped itself firmly over the northwest in the days before and word from Kev on a preamble ski in nearby Torridon indeed reported that there was powder. Now we only had to visit the off-license.

Excitement was palpable as ten of us gathered at the forestry carpark by Craig and loaded a trio of 4×4 vehicles and headed off over the railway and bumped and rattled six miles down a snow-covered track to Glenuaig Lodge.

A magical place with high hills all about and situated over 300 metres, and with glens on both sides we were officially on the Scottish watershed, a fact of interest to geographical geeks like me. Having matched our keys to the correct door on our third attempt we flooded in and went room to room like gullible house buyers. This bolt-hole was super-comfy, spacious, log-burners in kitchen and lounge, beds with real sheets, showers and even a rumour of a bath somewhere. A cork popped and the weekend had begun. Troy rolled out a fantastic curry and later folk went out in the deep frost to gaze at the firmament and witness a waning moon cast its silver on the snows.

Faultless skies the first morning and the hills resplendent. Breakfast finished we split into two teams, one of Fiona, Kev, Bridget and Al going for steep stuff, while Lizzie, Troy, Andrew, John and myself were just looking for a great tour. Peter, still on the mend and unable to ski, set himself up outside with tripod and long lens and would survey our progress. 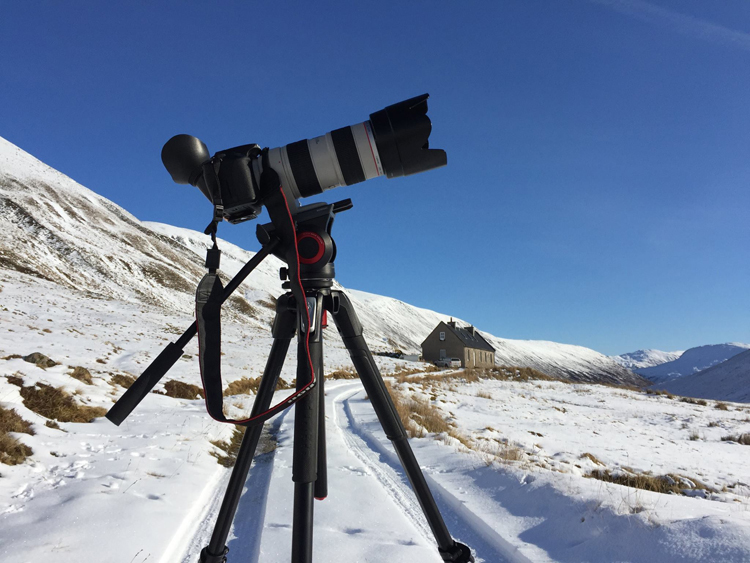 The long east ridge of Sgurr a’ Chaorachain provided a fine skin and lifted us above the glen and in an hour the views north and west rendered us almost speechless – snowy hills in an arc from Sutherland to Skye, and reaching the summit we could see Ben Nevis, the Aonachs and Cairngorms. The A Team (let’s give them the benefit of the doubt) joined us for photos. 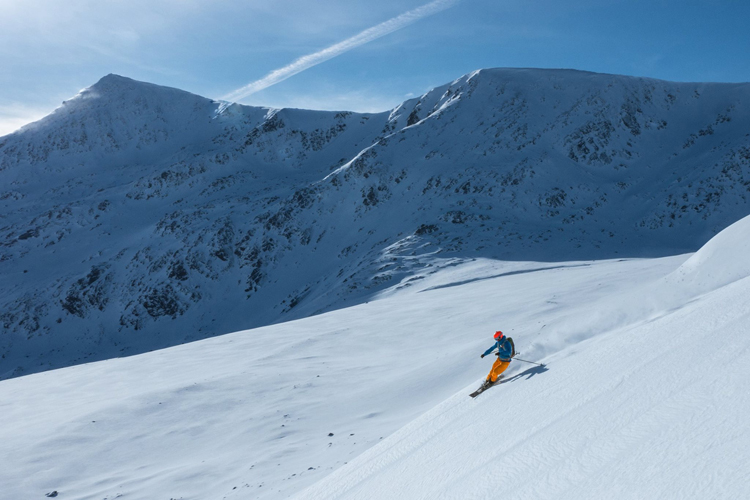 They wandered along the ridge eastwards to pick a plumb line whilst we skied back down the shoulder and dropped into the corrie and carved lines through fantastic powder. We tarried to watch the brightly coloured quartet one by one drop down a gully and disappear behind a great prow. 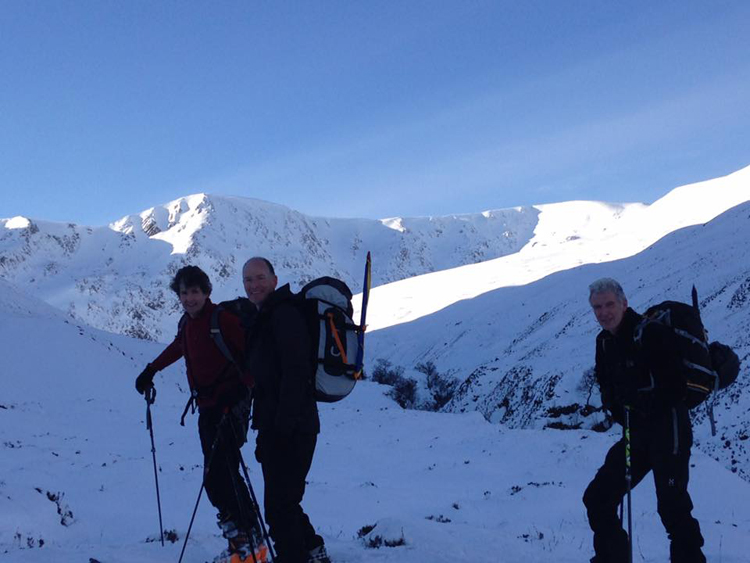 Meanwhile we skinned back up and tore more lines and this time belched steam to run the ridge round to finish in the sunshine by the lodge, and there was Peter laughing at our antics. A little tired but we shucked it off and rode the wheel and Lizzie, Troy and myself skinned to the col east of Sgurr nan Ceannaichean and chased the evening shadows back down. Always good to be last in.

The evening in full swing by now, everyone reunited and word from the A team that one had suffered an epic fall, a cartwheel into the powder. Even the Go Pros had been switched off but it was a great tale and the talk at dinner all the richer for it. And what a dinner. 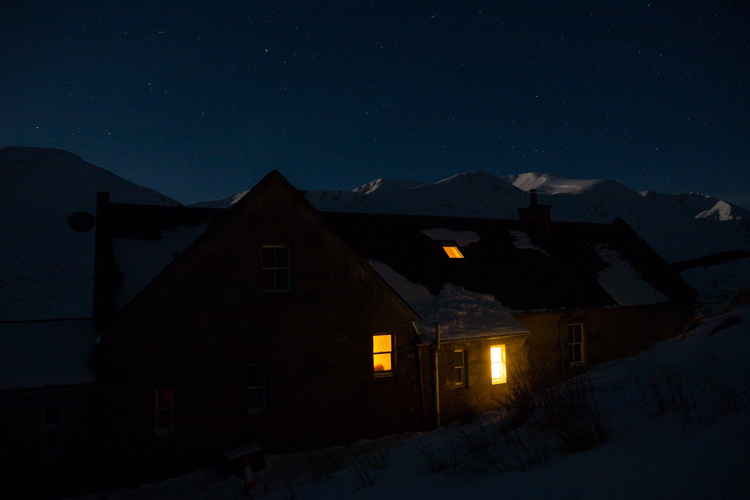 Not only had Troy left no stone unturned, he’d burrowed beneath cliffs and excavated whole mineshafts to provide a culinary experience fit for prince and princesses. It may have been cooked in a bag but each bag contained a hunk of beef in a bed of herbs and spices that had been precooked for seven hours. Heck, you can travel to Moscow and back in that time. We filled the dishwasher and retired to the lounge for beer, wine and John’s cakes and talked hills and skiing, and Troy’s recipes were traded like rare metals and later listened in stunned silence to Peter and his guitar belting out their repertoire.

Sunday dawned almost as bright and this time we headed for the great bulk of Maolie Lunndaidh. The A team now bolstered by Lizzie, trail blazed the steep flanks of Carn nam Fiaclan, we not far behind and finding it so steep that at one point we removed skis and climbed with axes. 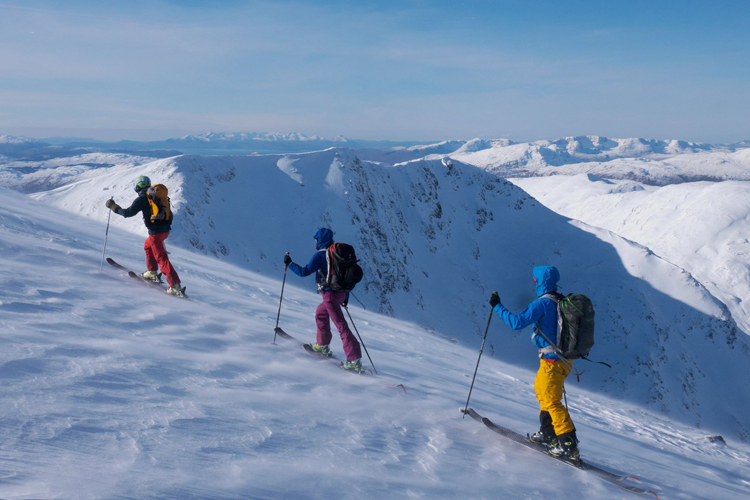 When we arrived at the plateau-like summit area Kev was poised above a corniced Fuar-tholl Mòr (Big Cold Hole) and promptly disappeared into its shadowed abyss. Possibly the first ever ski descent of this remote headwall. The remainder of his team dropped into the south facing Toll a’ Choin (Hole of the Dog) and reported steep and amazing powder. No cart wheeling this time. 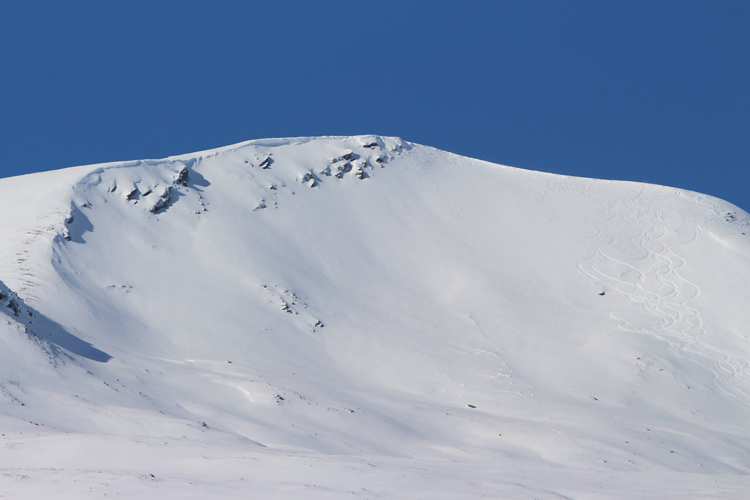 The four of us gathered at the summit and made great sweeping lines on the north side then east by a burn and steeply into the lower corrie with rocks to avoid and now joining Kev’s tracks and skiing the marginal slopes of this fantastic narrow amphitheatre, Glenuaig below bathed in sun and the last snowy reach of a thigh-burning no-turning ride over a canopy of heather. The others were not far behind and all mustered over pots of tea and coffee to chew over the day and weigh what magic the hills and company had given, and to parcel it up for the memory store, and title it ‘Champagne and Powder. And damn good grub’.