Spirits were high as the tourists on board looked at us with a mix of amusement and intrigue, though it was quite clear that Scottish trains aren’t as geared towards skier-traffic as their Swiss cousins…

We stepped off the train into a blizzard, and quickly drybags were strapped to sledges (the Highland “pulk”); but within 10mins, the sun was out and the mountains displayed their pristine grandeur, blanketed with inches of the fresh stuff we’d come here for. The couple who run the station-house restaurant had just returned from a holiday in warmer climes, and generously offered to take our bags from their to the hostel, so we were off to a great start. 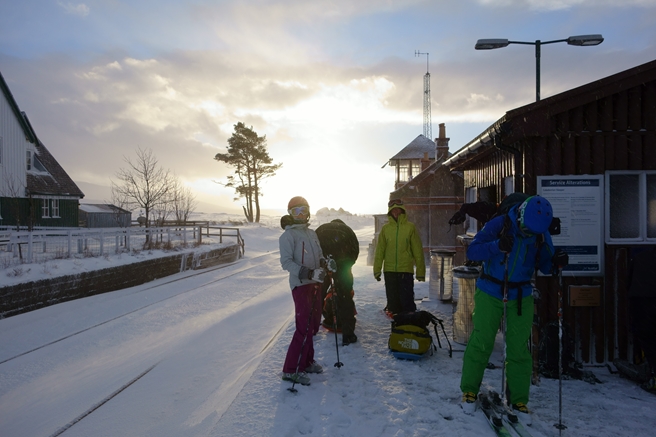 After a quick kit-swap and David’s arrival (he was on the later train from the south), 9 optimistic tourers left the hostel and headed towards the SW slopes of Beinn na Lap, in a variety of touring, tele and other gear (Mike’s 1996 three-pin tele-binding snapped about 50m from the hut…). Progress was quick, on dry, soft and falling snow, the stiff breeze blowing us up and across the hill, but as we ascended, visibility dropped, winds picked up and quite quickly we were in full-on Highland winter-conditions. We moved as a group of 9 for the first hour, before the group split into a descent-group, bound for tea in the hostel, and a punishment-group, heading further into the fray. The winds got more and more fierce, and after it became difficult to stand, beyond the point where we couldn’t hear each other without shouting and once visibility had closed down to about 5 metres, the remnant finally called off the summit-attempt. Taking skins off in those conditions was a matter of lying on top of kit to stop it blowing away, and when skis were finally on, Fee found that the force of the wind blowing her uphill was more than that of the gravity she had been hoping to assist her passage to the bottom. 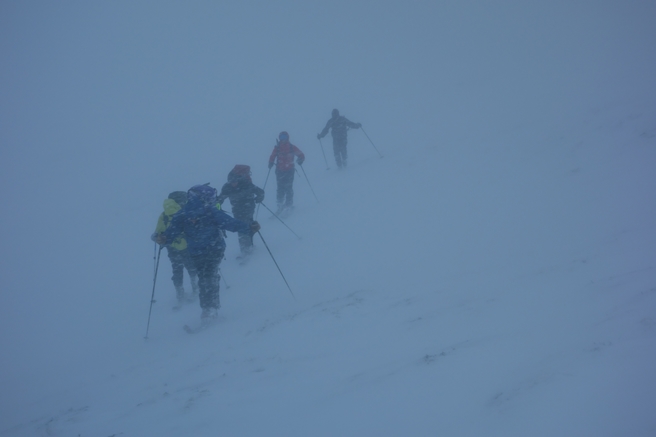 Still, once off the ridge, the snow was a mix between wind-packed powder, neve, well-caked heather and, eventually, partially frozen bog covered in a skiable layer of slush. The middle section was a delight to ski and everyone was in high spirits at the bottom. There was a crevasse in the peat though which two members managed to inspect in closer detail. 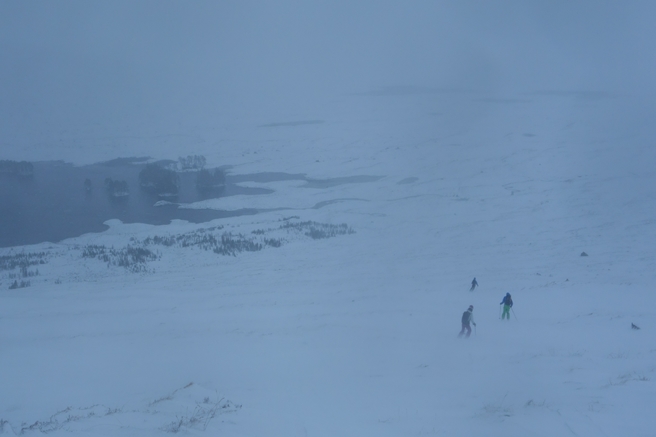 Some enjoyed it so much they skinned back up the hill for a second descent. Others went to the hostel for lunch. 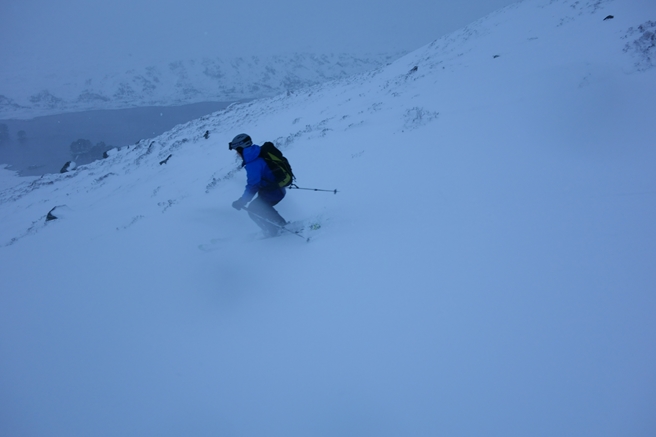 Simply being in this amazing place was special. The train access and overnight in the youth hostel really added to the feeling of being in the wild and we were so lucky with the snow that first day. Skis on at the train and skining up from the hostel to the top for some great descents.

We could not fault, only praise the SYHA and Jan the hostel warden. Loch Ossian was the second ever SYHA hostel in Scotland and what a treasure it is. Amazing location and pretty good facilities. It will soon have mains electricity which is a good or bad thing depending on your point of view. Either way we spent some happy hours in this great place.

The next morning the weather seemed to have abated slightly but you could still see a large plume of snow being blown off the summit of Leum Uilleim. Various options were discussed including a traverse back to Tulloch via Chno Dearg but it was decided that Leum Uilleim just looked too good to miss. 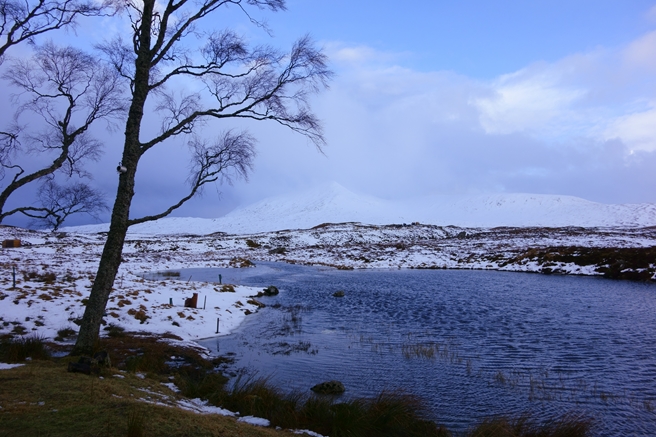 There had been a slight overnight thaw which meant we had to walk to the station along the easy track. This only took about 20 minutes though and we started putting our skins on just at the station itself. It appeared quite wild when we were sheltering to put the skins on but once on the moor it started to clear and the hill began to come into view. Leum Uilleim is a superb ski hill with lots of features and it was holding a huge amount of snow also. We skied directly towards the easterly ridge which we knew to be rocky but with the amount of snow it was an easy and pleasant ascent into the ever rising winds. 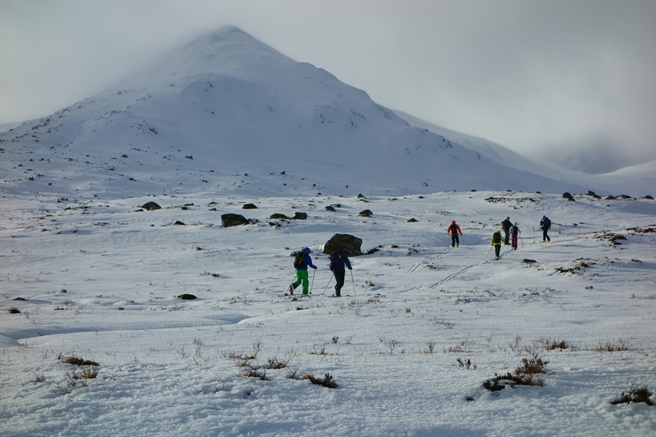 Weaving up through gullies and features the snow got better but was still pretty heavy. Just like the day before, the wind started to really get up also and there was a huge amount of snow being transported onto lee slopes. We did a wee transceiver check and continued upwards. 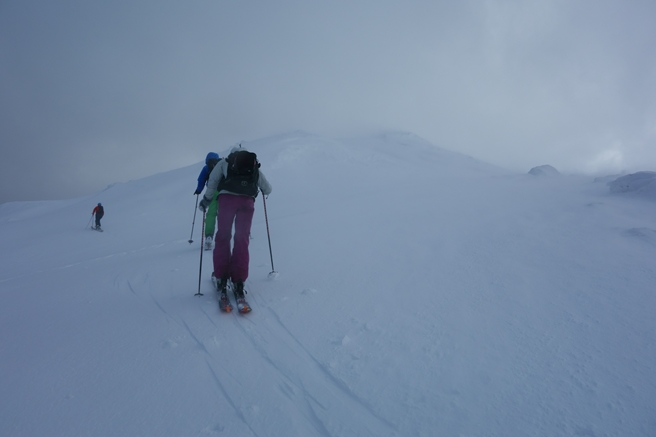 Shouting over the maelstrom, we concluded that the first 3 metres of height was probably full of snow and above that there were blue skies but as we got higher the cloud also came in.  Poor Mike had earlier on managed to fix his bindings but years of ski touring had taken their toll and they finally gave up in a fitting place with some great terrain all about. He had to walk down unfortunately. 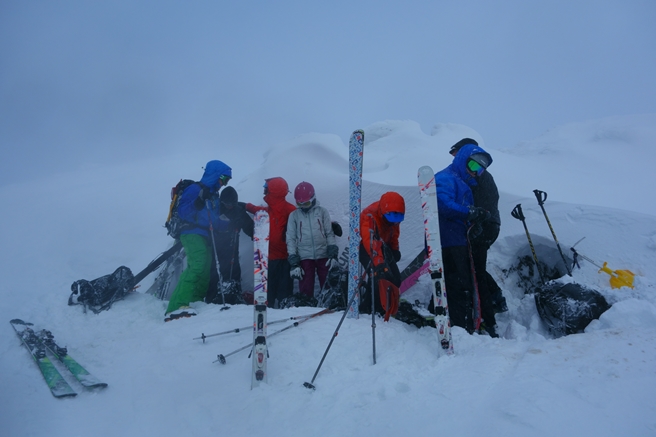 The descent was excellent but the first skier had to be careful as we were on a ridge with steep sides and it was hard to get an idea of distance and slope angle. Nevertheless, we made the most of it and club president charged down the hill in typical style. The strength of the club was really obvious on this descent – people on alpine gear, teles and so on.  A great range of equipment but one great descent! 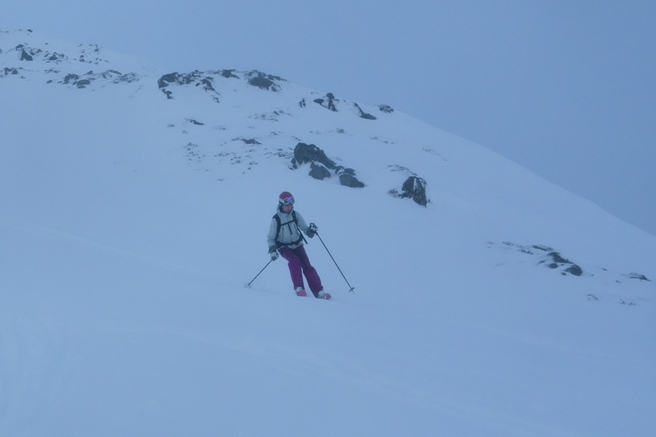 We got down quite early and the train north wasn’t til after nine pm but we went back to the hostel leaving our skis and rucksacks at the station. No one would steal them! Back at the hostel the craic was good and the super noodles flowed liberally. Jan once again made us feel very welcome. We walked back to the station with our Highland Pulks strapped to rucksacks but we all commented on what a great experience this trip had been. Wild land, great company, drams, laughs, great skiing and wild weather. What more, really, do you want? 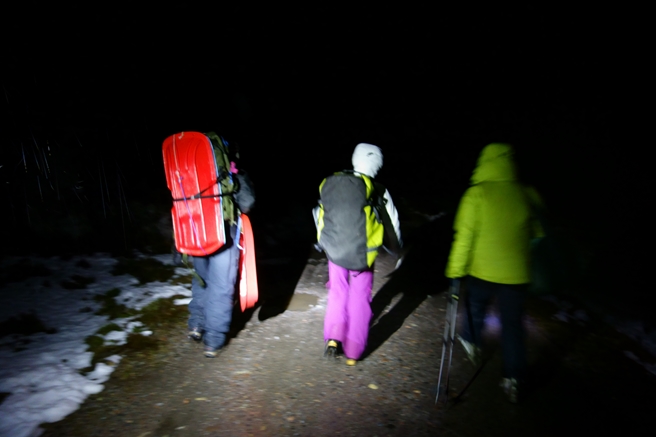 If you liked the sound of this trip and are not a member click here to find out more: Membership.  Our next trip should be pretty special – 15th February 2014– Igloo Trip