Web Admin2020-01-24T12:09:45+00:00March 4th, 2014|Previous Trips|
By Andy Ince
This years Igloo trip was planned for Glen Affric as an alternative to the usual choice of the Great Moss in the Cairngorms. Glen Affric provides a sheltered location with reliable snow and saves me a long drive to boot! The club ran a trip two years ago which was successful even if only three members took part. The burns on the slopes of Toll Easa and Toll Creagach act as excellent snow traps so even if snow cover is sparse there’s usually snow for some skiing.

This year the forecast for the Saturday was not ideal and to be honest building in whiteout conditions is not much fun so the Igloo build is postponed until April. However myself and Roy went for a very enjoyable ski tour in Glen Affric on the Sunday which was forecast for some sunshine and much less wind. 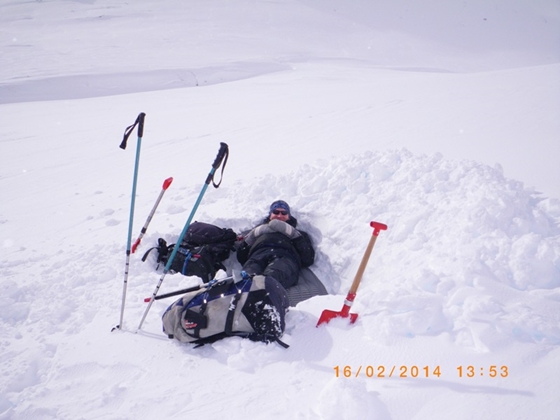 The road up Glen Affric still had remnants of snow which was very promising as I have yet to ski from Chisholms bridge car park. I was to be dissapointed again but the snow cover above 500m was the best I’d seen. Although we had to walk about 2km along the path it was possiblke to ski with care from the second deer fence gate and we make coffee break at 11am just before the long climb up the slopes of Toll Easa. We headed for the Bealach and stopped for lunch just below the summit of Toll Easa. A quick bit of shovel work resulted in a comfortable sheltered snow bench for lunch and we relaxed in the sunshine and snow showers enjoying the view. 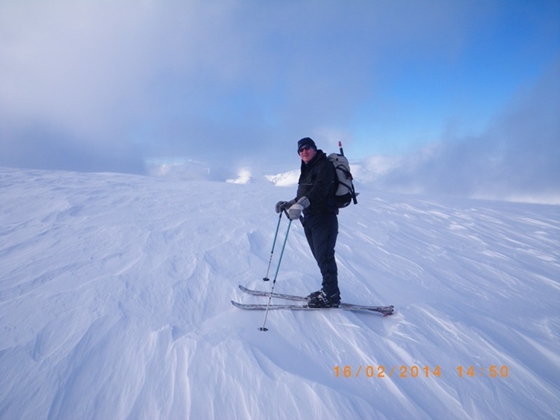 Just before setting off for the summit of Toll Easa I decided to dig down and check the snow pack for any weaknesses. All the layers were reasonably well bonded and there were no signs on the slopes of any slips, slumps or other avanlanche danger. The slope had a southerly aspect  which lately has been the safer side but its worth checking. Interesting was the depth at this height amounting to about 1.5 to 2 metres. It was obviuos from looking around that there were drifs many times deeper than this. 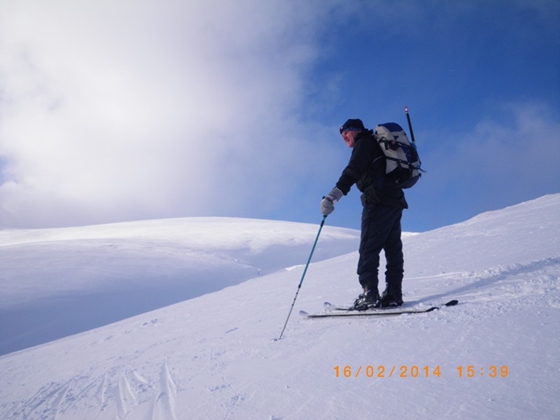 The push up to the summit was short and steep and made a little difficult by the size of the sastrugi formed by the wind. This made skiing off the summit a tad interesting! Not having skied this year it took me a while to get my act together and link some turns. Skiing off the east towards Toll Creagach took us down to Coireachan  Odhar which provided us with a wonderful mini bowl to link some telemarks in good smooth snow.  We followed Allt a Coire Odhar down being quite cautious near the burn due to steep cornices on the burn itself. Visibilty was quite variable but with enough brightness to cast shadows and enjoy the skiing. That is until we hit the sticky, heavy wet snow on the lower slopes. We started a count of falls competition with my count exceeding Roys until about 7 or 8 after which we lost count with the laughter and frustration. We did make it all the way down without injury but dare I admit restorting to traverses and step turns. Always a good safe stategy when your legs are tiring.

From the valley bottom we were able to ski back along the path, carefully avoiding the occassional rock until reaching the deer fence gate. Discretion at this point prevailed and we restorted to walking out and thus saved our ski bases for another day. 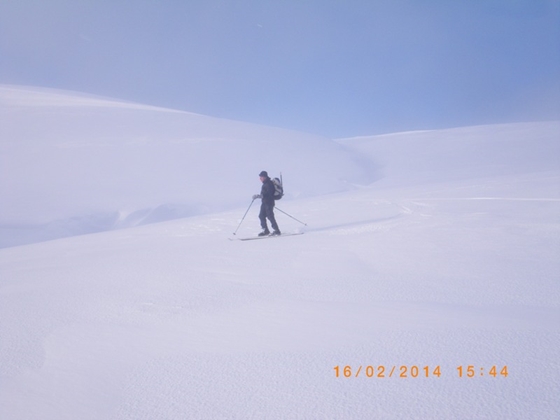 It was dissapointing not to have camped and I’m determined to do at least one Igloo camp this season. If you’re interested in a camp I hope to do one in April probably about 12th/13th. Let me know and we’ll see what conditions are like nearer the time. The alternative would be to take a tent which is something we enjoyed last year on the Great Moss in March. A tent trip is certainly on the cards for a high level May Tour.