The depleted snow conditions were reflected in the number of club members who arrived at the Glen Affric car park on a calm but cloudy Friday night, namely Blair, Karen, Rachel, Alison, Andy, Adam and Dougal. Having loaded their kit and Dougal into Adam’s car, Blair and Andy mounted their trusty steeds and led the party to the gate where the elusive padlock was at length located.

Barring a fairly quick wrong turn by the ladies’ party, the approach proceeded satisfactorily, with the ford occasioning some fun for the drivers. The party found Strawberry Cottage in good repair, particularly the ample pile of dry wood that was soon toasting in the grate. Various bottles of beer, wine and whisky were produced while the conversation stravaiged far and wide over the topics of Crown mums, Crown dads, split-board skin troubles and veganism.

With Saturday’s forecast looking better earlier, IBSC alarm clock Karen was tasked with sounding reveille at an unpalatable hour. The edge was taken off by a combination of homemade marmelade courtesy of Andy (awarded two pips by Lake District high end amateur judge Rachel) and hand-ground coffee thanks to Adam (even though he does not live in Crown.) Outside the cottage, mists shrouded the birches beneath blue-dappled skies, lulling the team into optimistic mood – a mood sustained even during the punishing direttissima of the SW face of Creag Coire nan Each – as views opened up behind of Sail Chaorainn, Mullach Fraoch-choire, Ciste Dubh, Beinn Fhada and Sgurr nan Ceathramhnan. 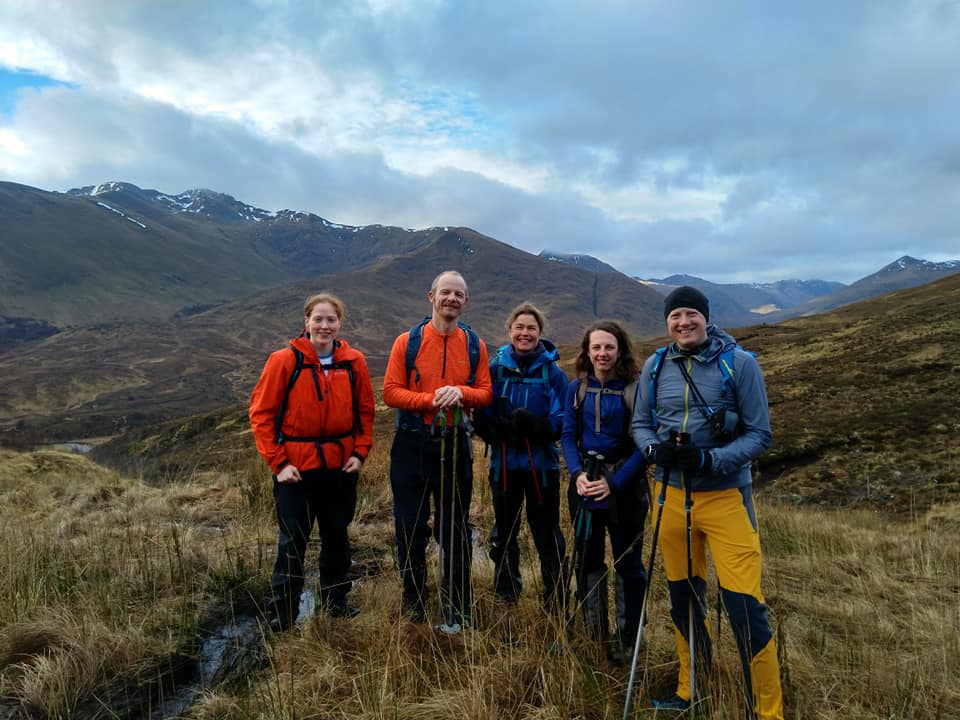 On the ridge things became substantially windier and winter was finally found, brooding in collapsing cornices in the magnificent east-facing corries of Mam Sodhail. These are high and, holding snow even in these conditions, promise great things for the next team fortunate enough to find themselves there in a cold snap.

Spurred by the wind – now bearing a horizontal blizzard – IBSC pressed on towards the summit, finding some very welcome respite in a small ruin shortly before it which was immediately claimed as the interim club hut. The wind, meanwhile, claimed one or two victims in the hasty there-and-back to the cairn, and the less Scottish members of the party saw fit to don goggles on arriving back at the hut before proceeding to the col where ice axes made a token appearance.

With snow threatening imminently to turn to rain, Adam and Dougal opted to limit their exposure by switching to hill running mode and beat a hasty retreat down Coire Leachavie and back to the cottage, where soon smoke was rising from the chimney along with the steam from their discarded undergarments. The rest of the party were welcomed with more freshly ground coffee, single malt and high quality diddly diddly music on the Bluetooth speaker. Not to be outdone, the IBSC Ladies proceeded to have a cleansing swim in the river while the boys set to work on dinner. Adam’s root vegetable tangle took considerably longer to prepare than to eat, but was the perfect foil for Blair’s well-judged chilli. While the food cooked, hunger pangs were eased by Rachel’s superb apple cake and Andy’s never-ending supply of Bombay mix while the alcohol flowed and trips to the outside lav became ever-wilder as the storm closed in around Strawberry Cottage. With bedtime fast approaching, Dougal’s choice of most fragrant sleeping companion was an obvious one: Adam – with his Smelly Hill Runner credentials – being the clear front-runner.

With the storm not yet having blown itself out, Sunday morning was a slower affair. Even Karen had a lie-in till 6am before succumbing to the lure of An Socach, while the rest of the party dallied abed prior to a breakfast variously of homemade bread, marmelade, bacon sandwiches and more coffee. Mid-morning, Andy saddled up for a westerly-assisted ride back along the loch while Alison, Rachel and Adam got ready to frothily brave the flooded track up Gleann na Ciche and Blair the bike ride to Camban.

Soggy once more, IBSC reconvened at the cottage for lunch and clean-up before bidding fond farewells and – in Adam’s case – having one last bit of car-ford fun.

We left the hills whiter than we found them, and many fresh tracks were made in the Affric bogs.