One thing is certain about Scottish winters – they are unpredictable and 2018/19 seems to have been more so than most! After the Inver Croft weekend in February where the forecasted blizzards failed to materialise, followed by the virtually snowless Affric weekend in early March, the latest Glen Affric trip again proved the forecasts wrong with the heaviest snowfalls of the winter coinciding with our arrival.

So after a different blizzard, involving multiple WhatsApp messages, 9 of us assembled at the forestry car park early Friday evening and split into two groups with Simon & Gordon providing the much appreciated 4×4 transport to transport us the final 4 miles up the private track to the door of Strawberry cottage. The cottage, run by the An Teallach club and located at the foot of the highest mountains in the West Highlands, is superbly positioned for a huge variety of brilliant ski touring options, so anticipation was high for some good conditions. 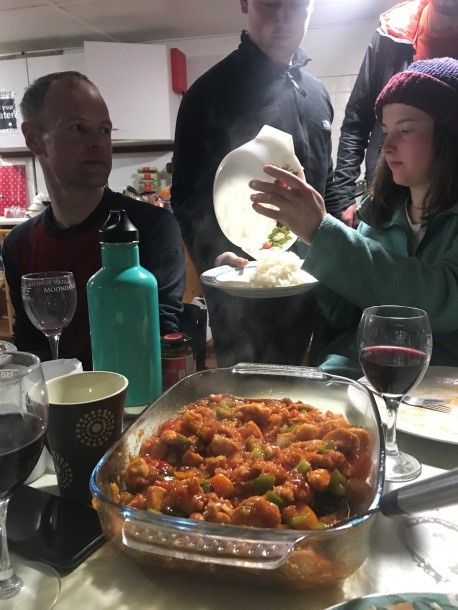 David ensuring every grain of rice is fairly shared out

The weekend prize for the furthest travelled and best chef went to Ed Twinn who not only spent the entire day driving up from Cirencester but who also cooked both nights dinner for all. Indeed thanks to Ed and after settling in, restaurant quality food including a great Apple crumble courtesy of Simon was washed down by modest alcohol before we headed off to bed in expectation of a great Saturday forecast. 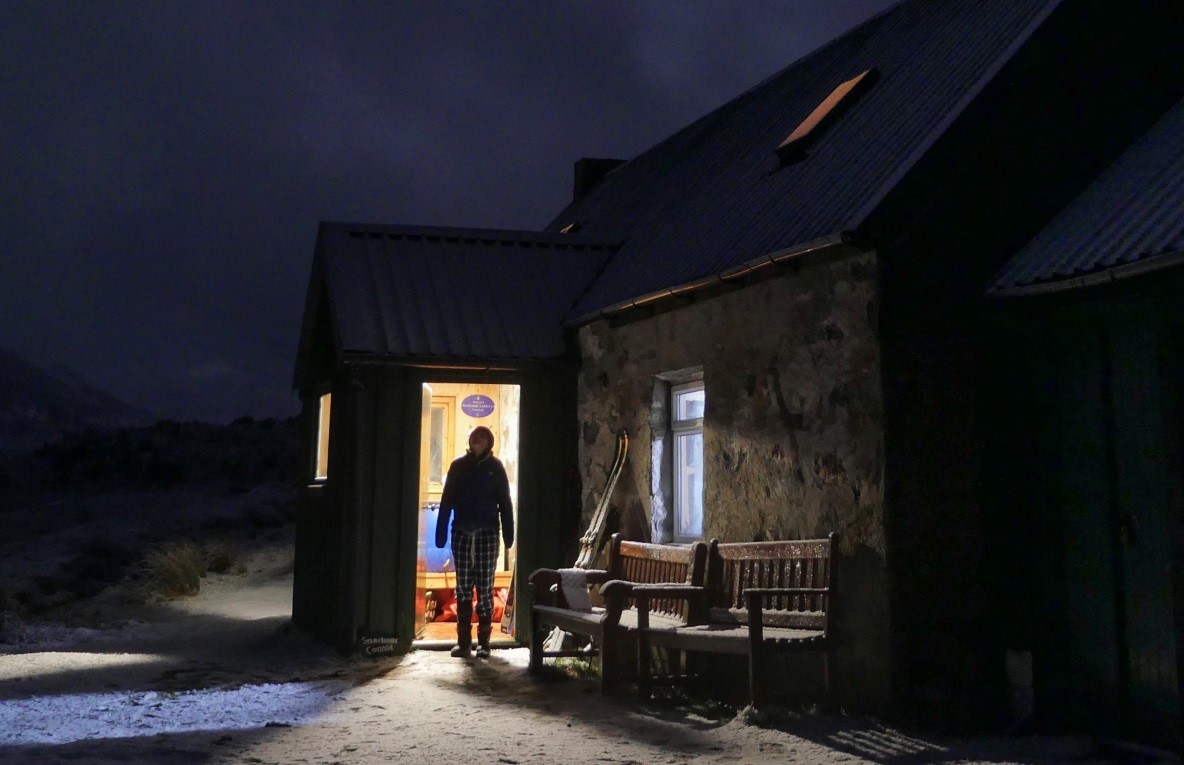 Star watching during a brief clearance

At this point Gordon, having managed to forget his sleeping bag in order to demonstrate his hard core credentials, managed to scavenge some old dog blankets under which loud noises emanated all night simply to prove to the rest of us his ability to sleep under anything. 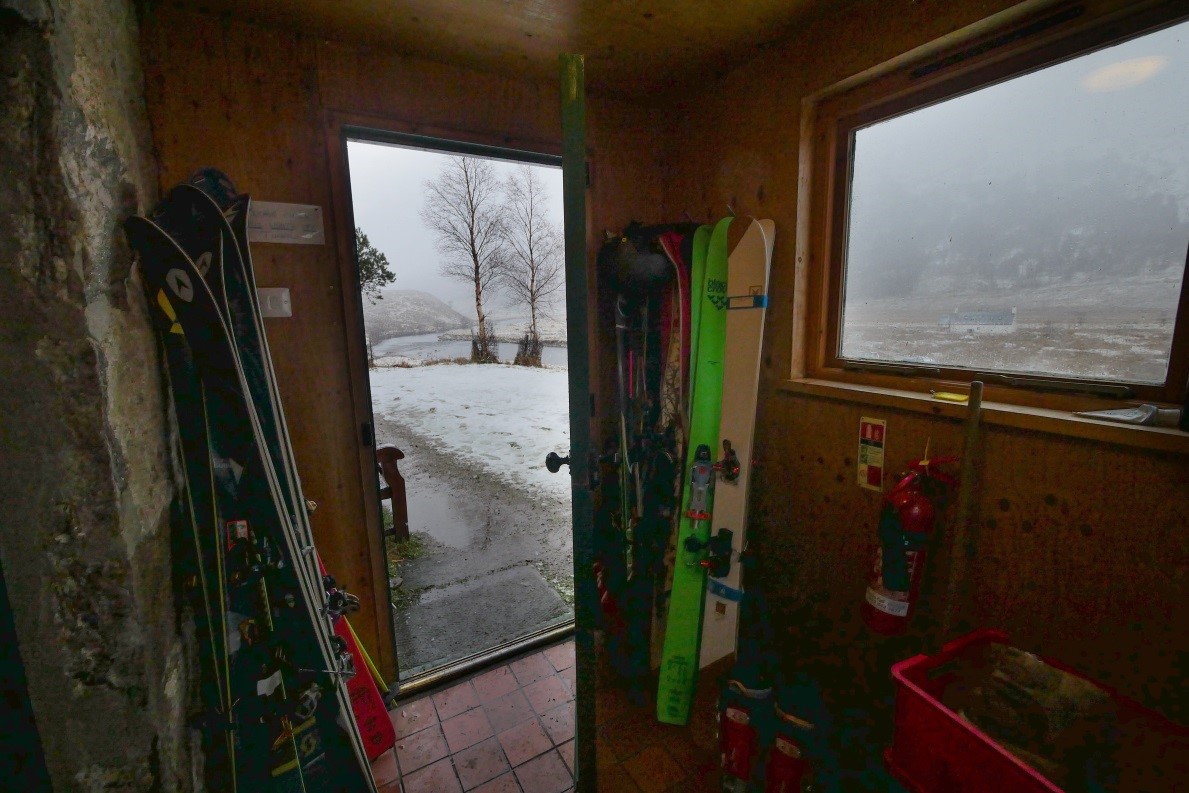 Saturday arrived and first out of the door for a snow check I was met with fresh snow, steely grey skies and lowering cloud. Before long light snow turned into the more persistent variety and without any accompanying wind it felt more like the arrival of an alpine storm than the more normal Scottish maelstrom. Not to be deterred however enthusiasm, fed by the visibly lowering snowline, soon saw us heading into nearby Coire Coulavie where, after a short but steep haul to 515m, skis were transferred from the sacks onto the feet. 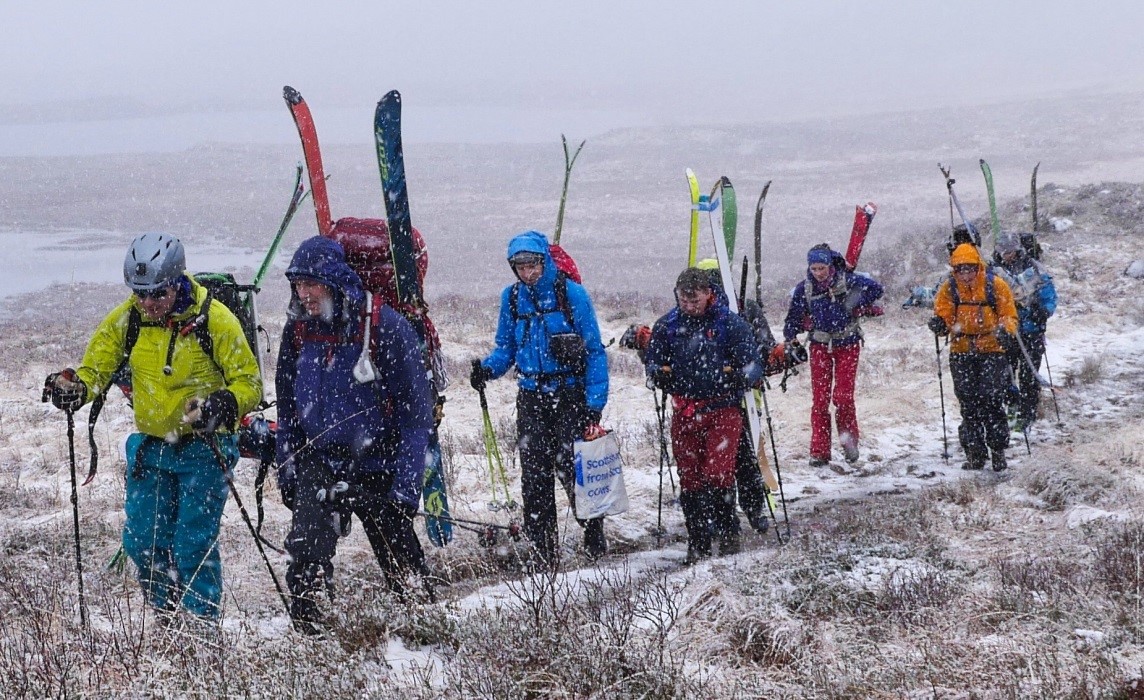 Heading along the Loch Affric path 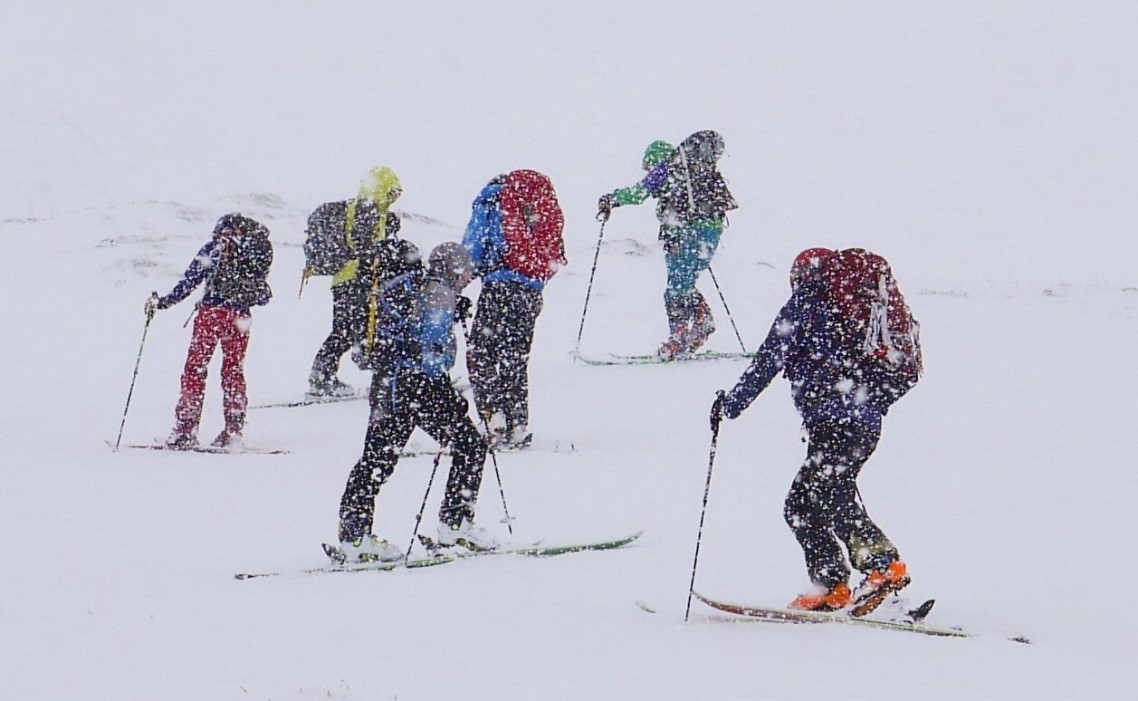 We skied on motivated by rapidly improving conditions with the old snow (ie all of 48 hours ?) rapidly being covered by an increasing depth of new powder.

The group split into two with the powder whores* opting to play in Allt à Bealaich Bhàin whilst the mountaineers** pressed on up determined to reach the summit of Mam Sodhail or given the lack of visibility quickly renamed as Mam Sod All. Whilst the powder whores played their games, up above, in worsening conditions and less than 500m from the summit of Sod All, the mountaineers enjoyed a moment of mass compass hysteria. A group huddle involving 3 compasses correctly pointing in the same direction still led to group wisdom briefly taking the party in the opposite direction. 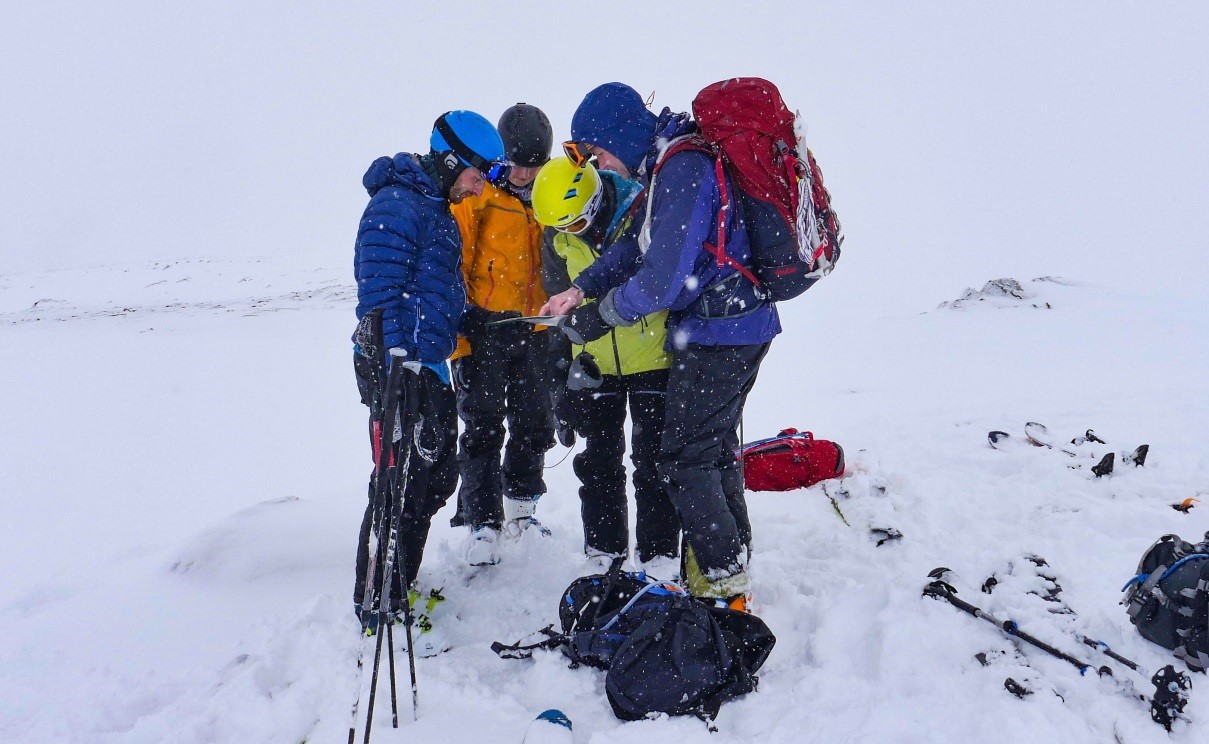 Mistake quickly rectified and a nervous descent in nil visibility led the party into Coire Leachavie. At 1000m and dropping below the cloud base the mountaineers were though rewarded for their additional effort by a magnificent 2m run on perfect powder with 500m descent. A happy but tired party finally arrived back at the hut in heavy snow shortly before 6pm. 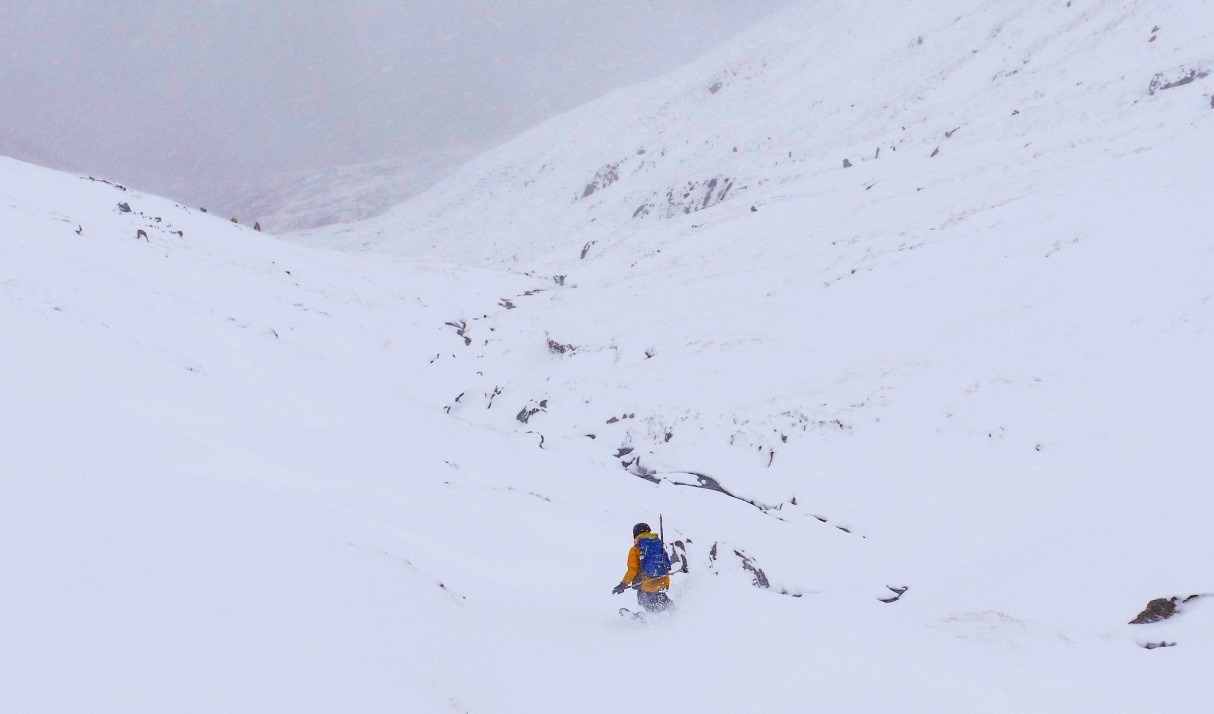 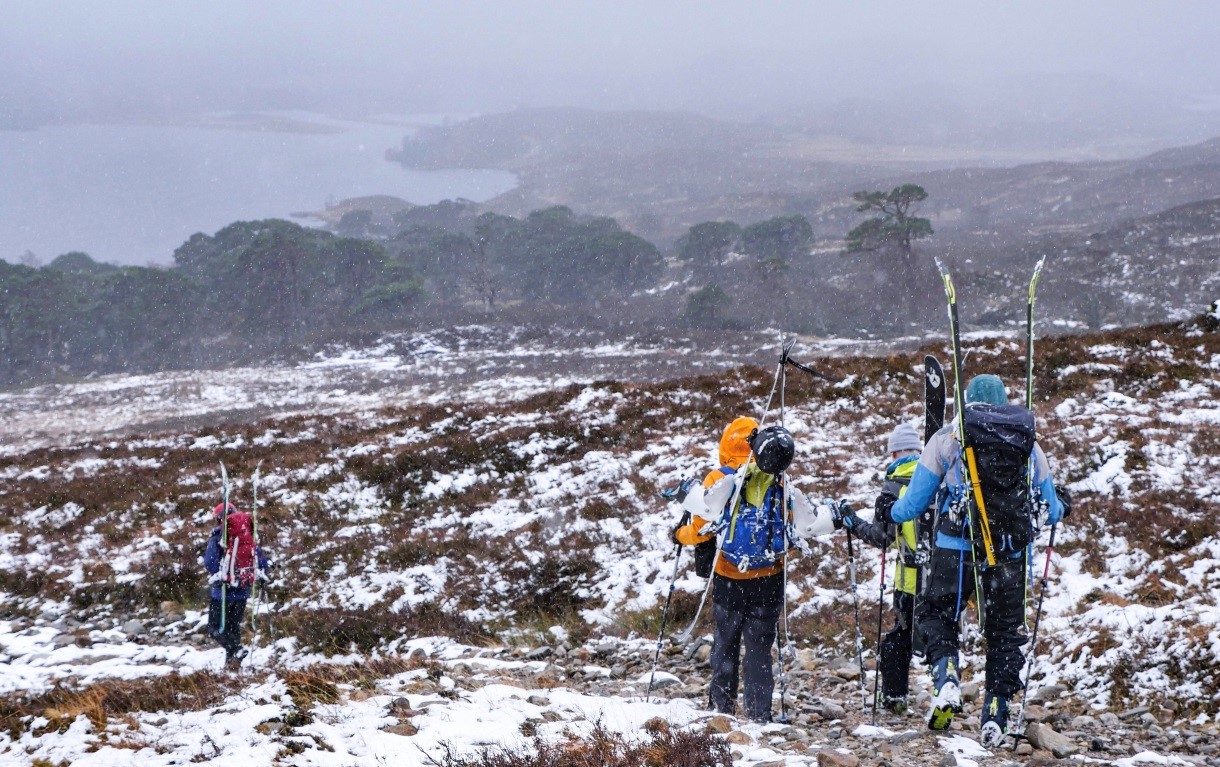 Heading down to the Affric path

That evening more Ed food, the arrival of Duncan and an amusing Ed game made for a very sociable time enlivened by frequent weather checks confirming the snow was continuing to fall. 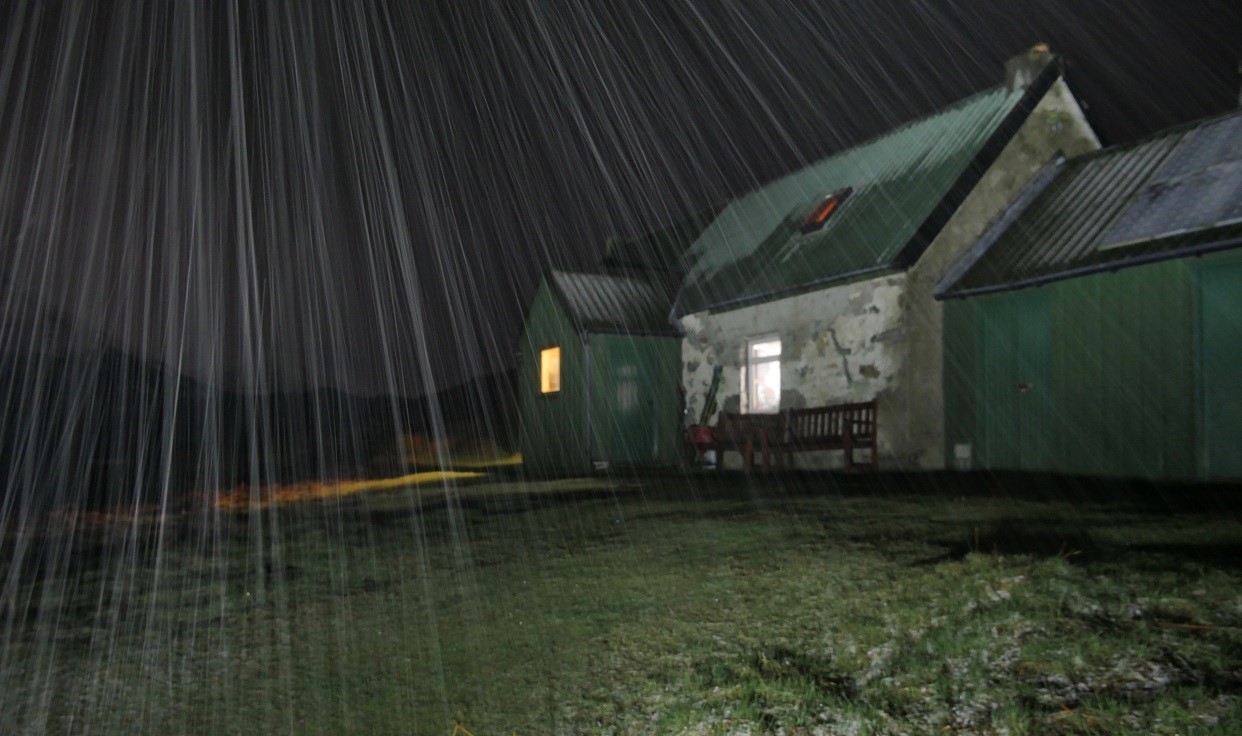 Not a night to be outside

Sunday and despite facing heavy sleet, hidden tops and strengthening winds we were nevertheless quickly out the door heading back to the playground of the day before. The changes overnight were stunning with snow depths in Coire Leachavie by now comparable to a normal season despite the fact that 14 days earlier it had been snow free. 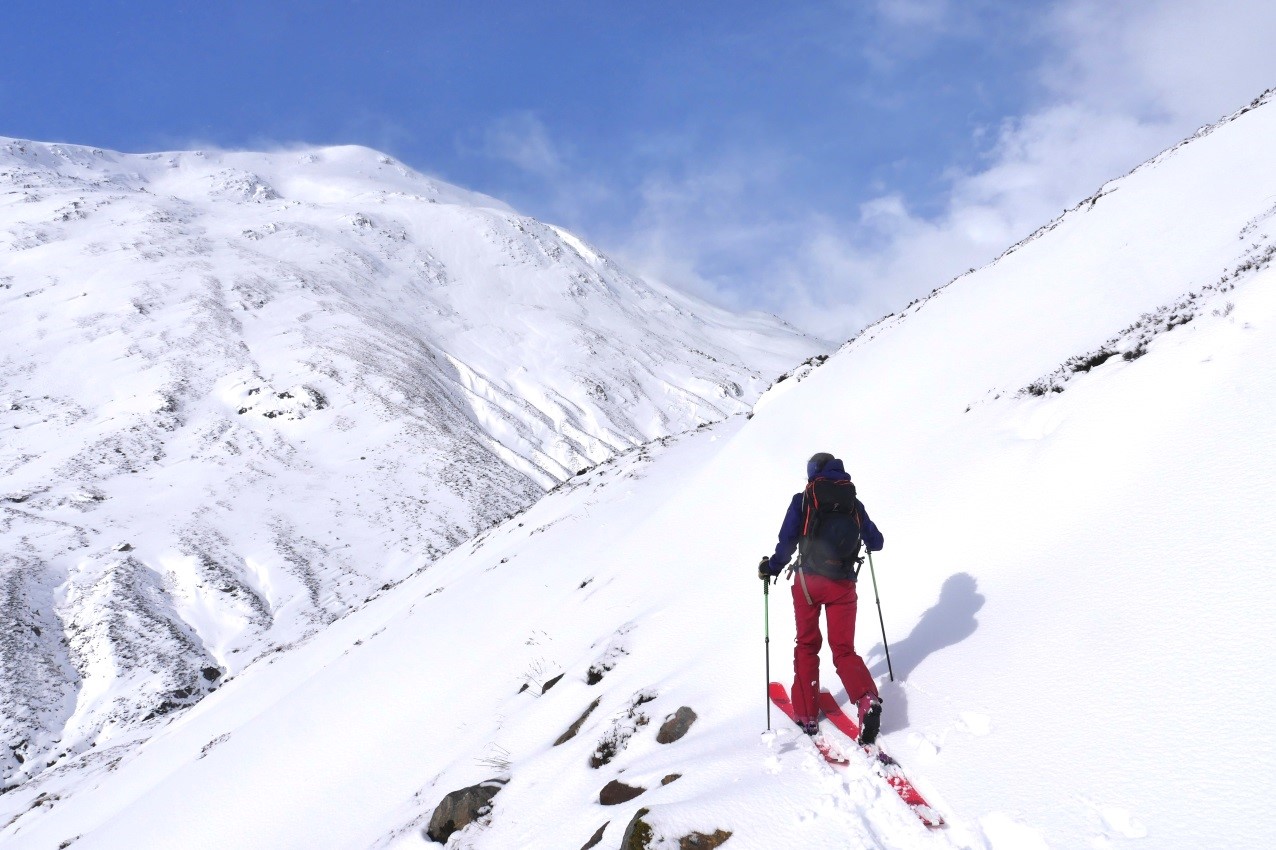 600m and the stalkers path, followed the day before, now buried 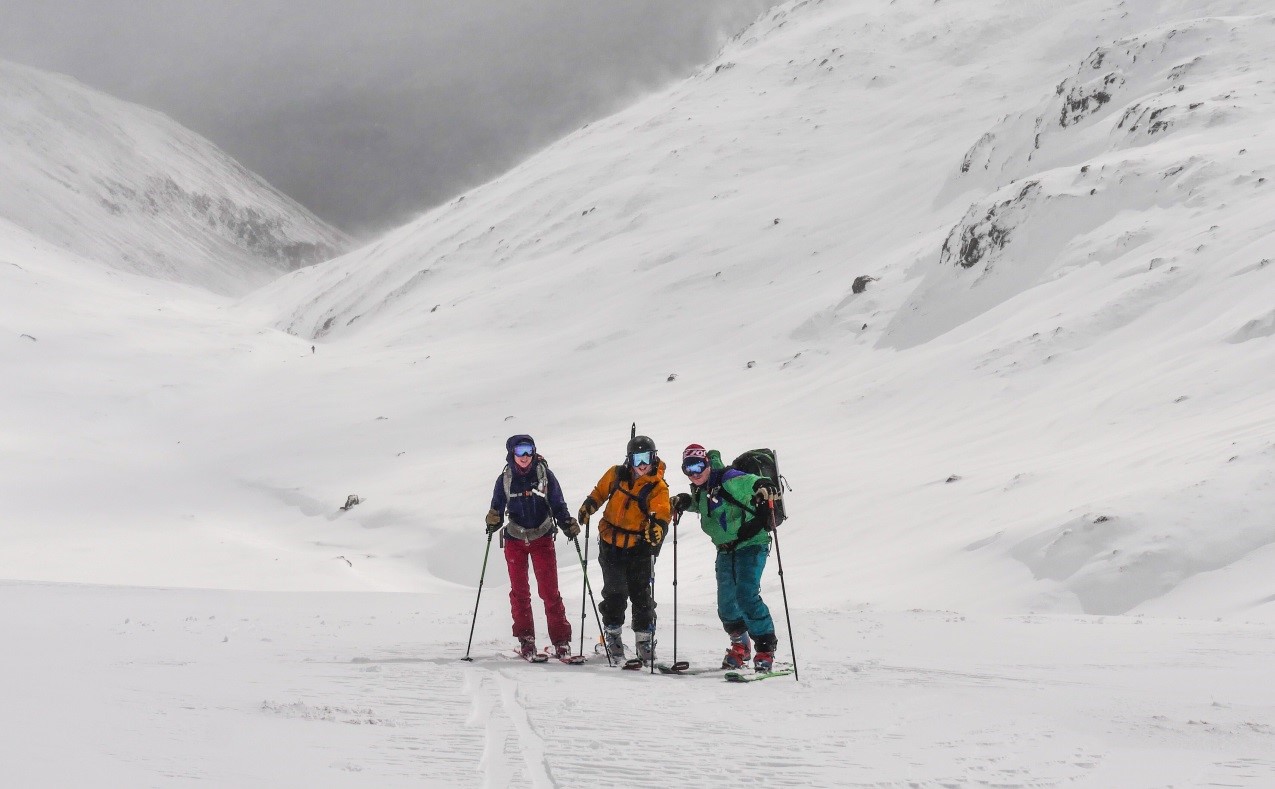 Ready to do battle as the weather closes in again

Blue sky made a brief appearance, the sun came out and Scotland at its scenic best put in a brief appearance before the curtain came down again. We were then forced to hunker down in a succession of brief swirling spindrift storms that threw two of us off our feet. Goggles became a necessity, exposed skin was painfully battered and Fiona demonstrated how to lay an egg. 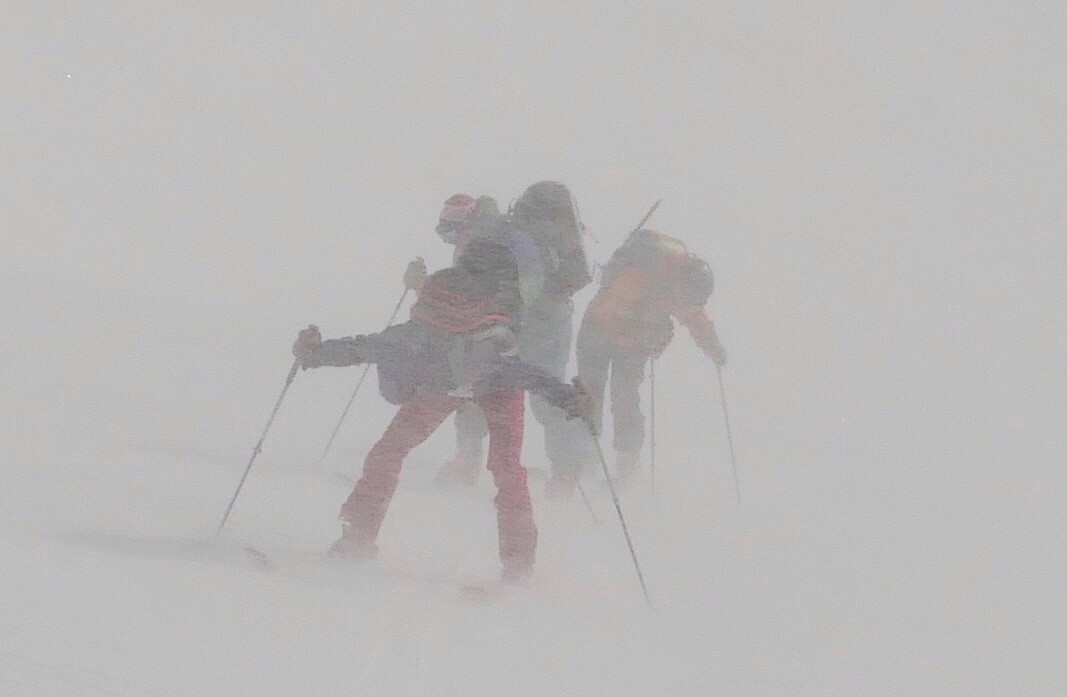 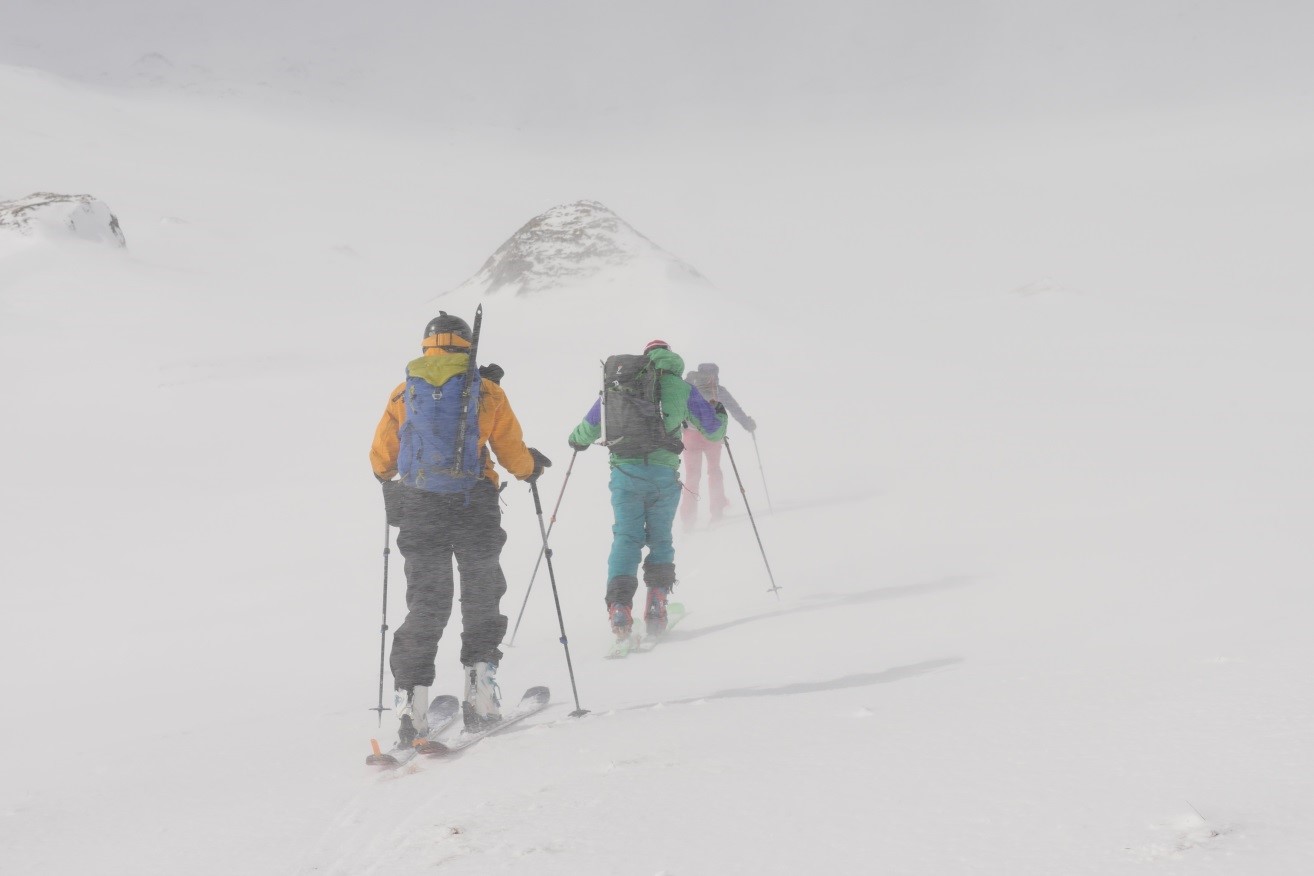 The sun continued to make a more determined effort to break through and finally the Coire lit up in an extraordinary wild beauty of flying spindrift, magnificent lines and acres of powder. 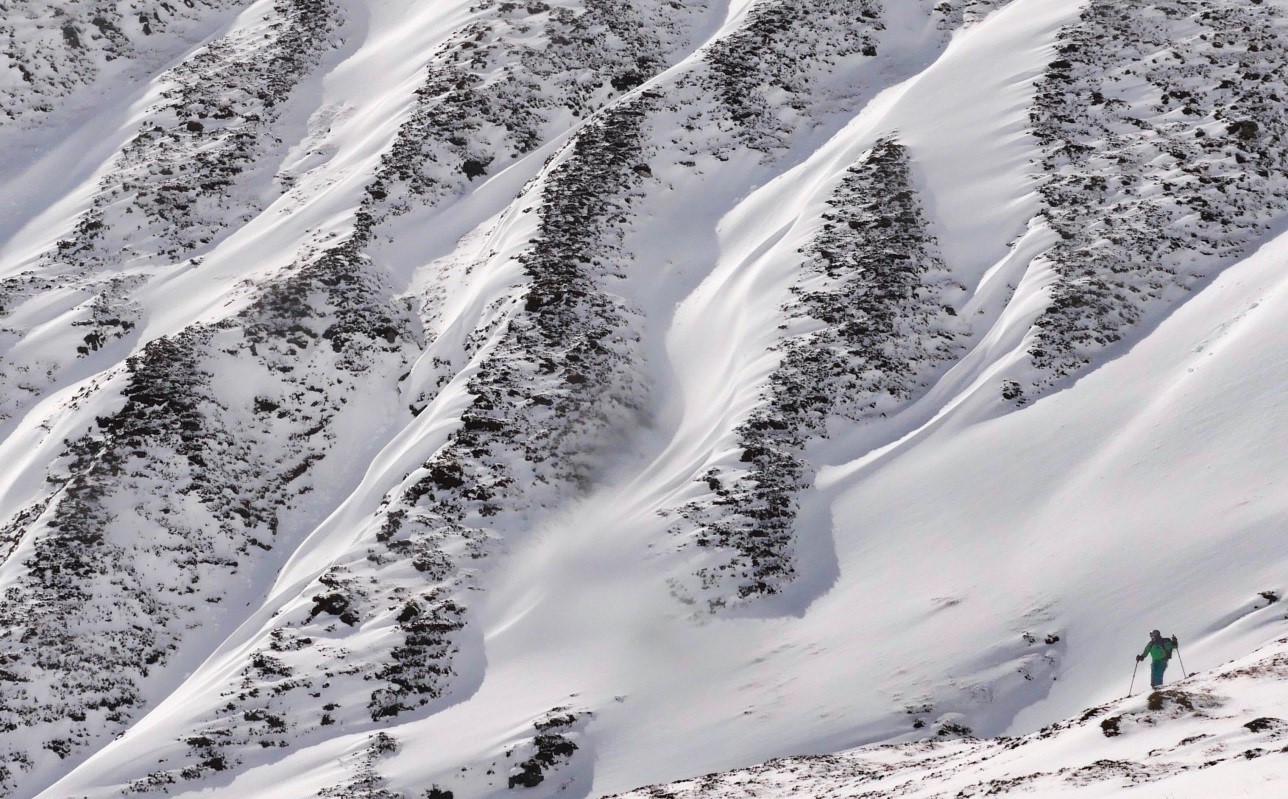 A final uphill fight to 1000m and the transition to downhill mode was rapidly executed. We then set off down what has to be one of the most enjoyable, remote, mellow and scenic descents to be had in the West Highlands. A variety of lines were chosen although with numerous options all around, the Coire is more than worth another return trip. 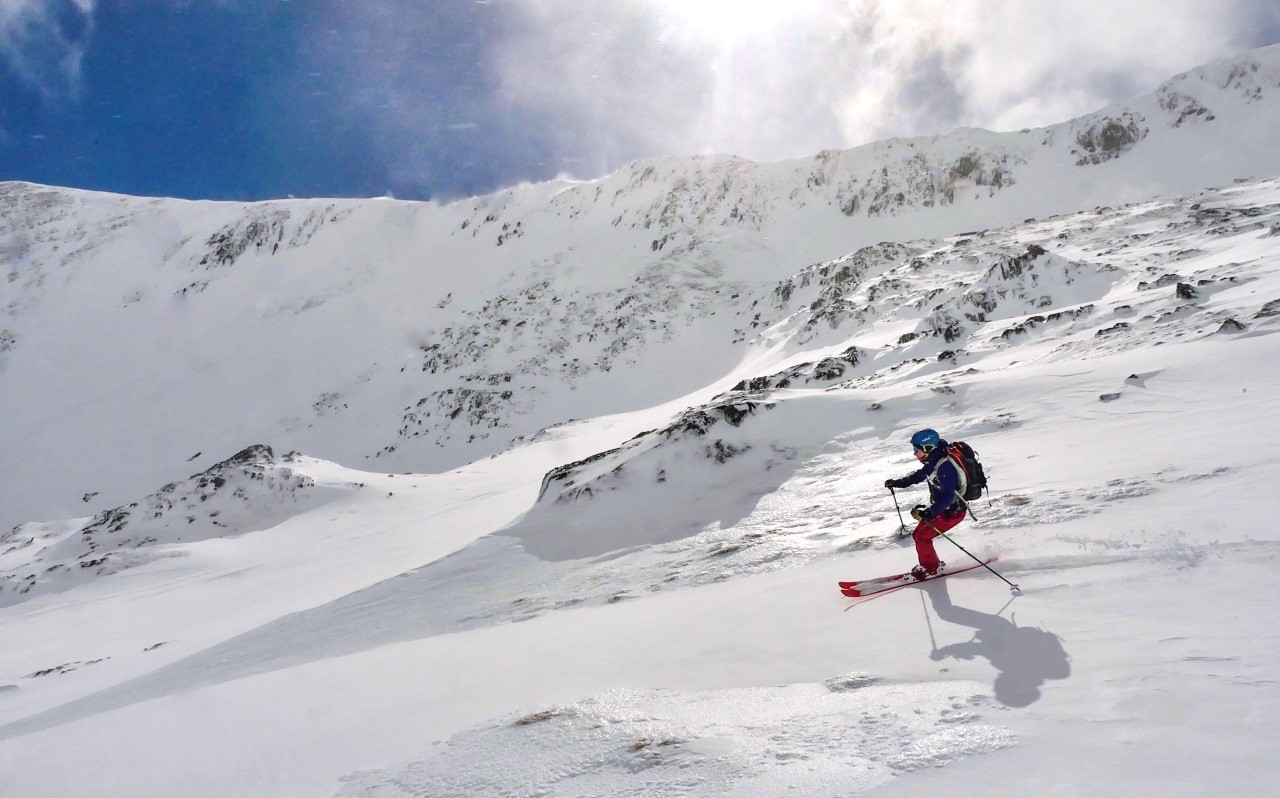 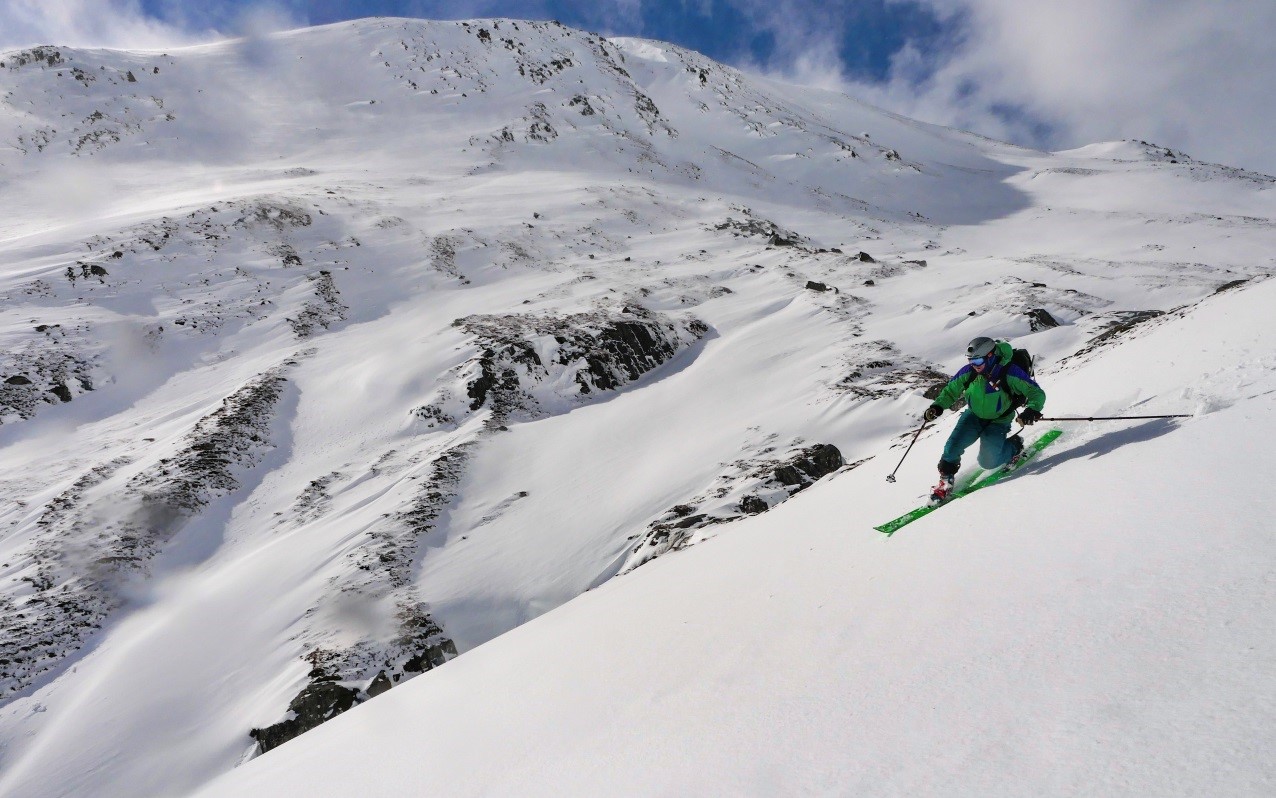 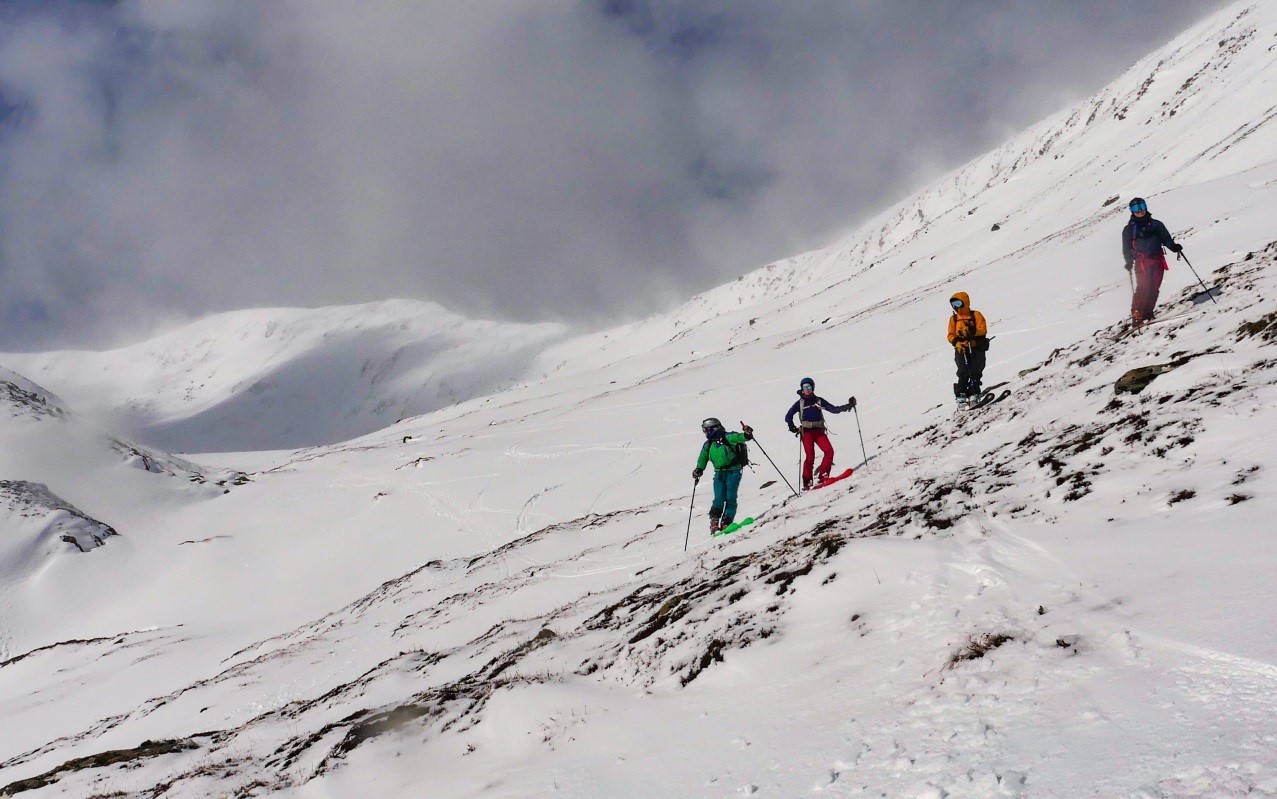 For now though the end of the snow was all too soon reached and in glorious sunshine the 3km walk back to the hut was a joyful reminder that Scotland at its best rivals anywhere in the world. Stunning views of distant peaks, rapidly varying light, the grandeur of the Caledonian pine forest fringing the beauty of Loch Affric combined with the constantly changing wild spindrift tails racing off nearby ridge crests to make the return walk one of the highlights of the weekend. 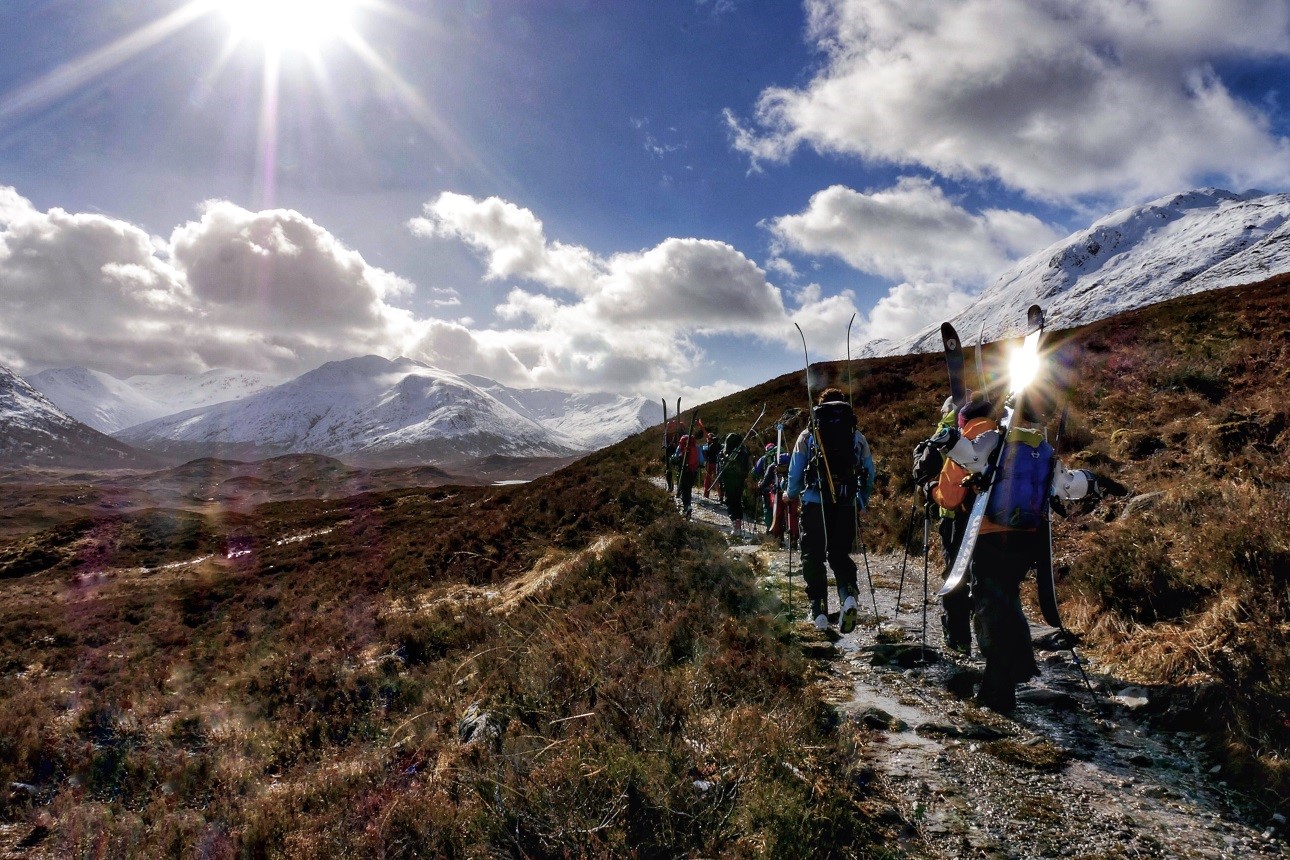 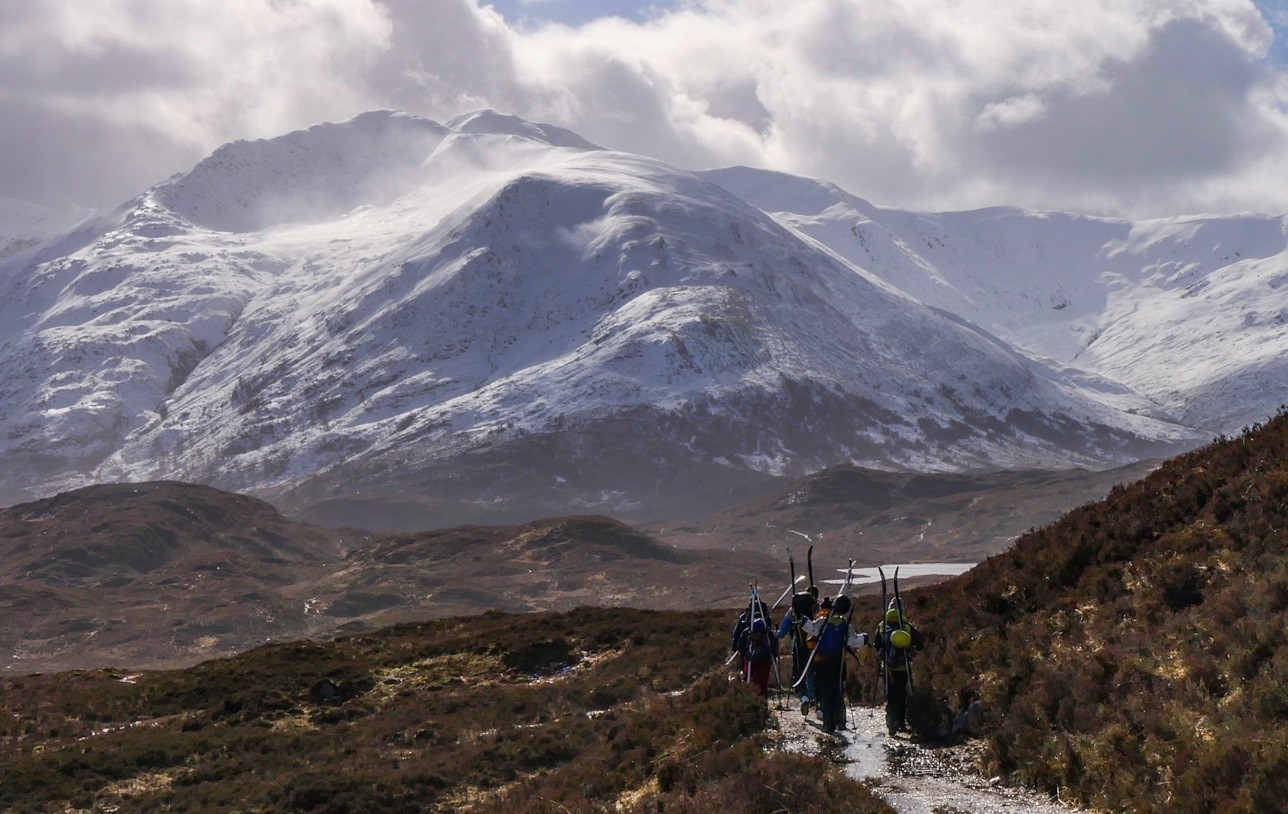 The winter still has time to run and undoubtedly it’s been a frustrating one with a few enforced hill walking meets, but as with previous years this particular trip proved the club has a knack of hitting the best places at the best times.