After following the beautiful winding Glen Lyon we arrived at the luxurious country house on Friday evening to very little snow on the surrounding hills.  There was plenty of room for everyone in the massive living space complete with open fires, patio windows and a huge range cooker. We settled in and started to make plans for the following day which was forecast to be wet, very windy and generally unpleasant. Deciding that the gale force winds and high snow line meant skiing was off the table for Saturday, we had a relaxed evening before heading to bed.

After some porridge for breakfast, half of the group had made it their mission to go for a swim in the freezing cold river visible from the house. The ‘swim,’ was more of an exhilarating dunk and pose for a photo before jumping back out of the icy water and rushing back to the warmth of the house, where we were greeted with second breakfast – bacon rolls! Having had plenty of excitement for the morning it was time for a spot of relaxing yoga in the living room, lead by our very own Alistair Stark. 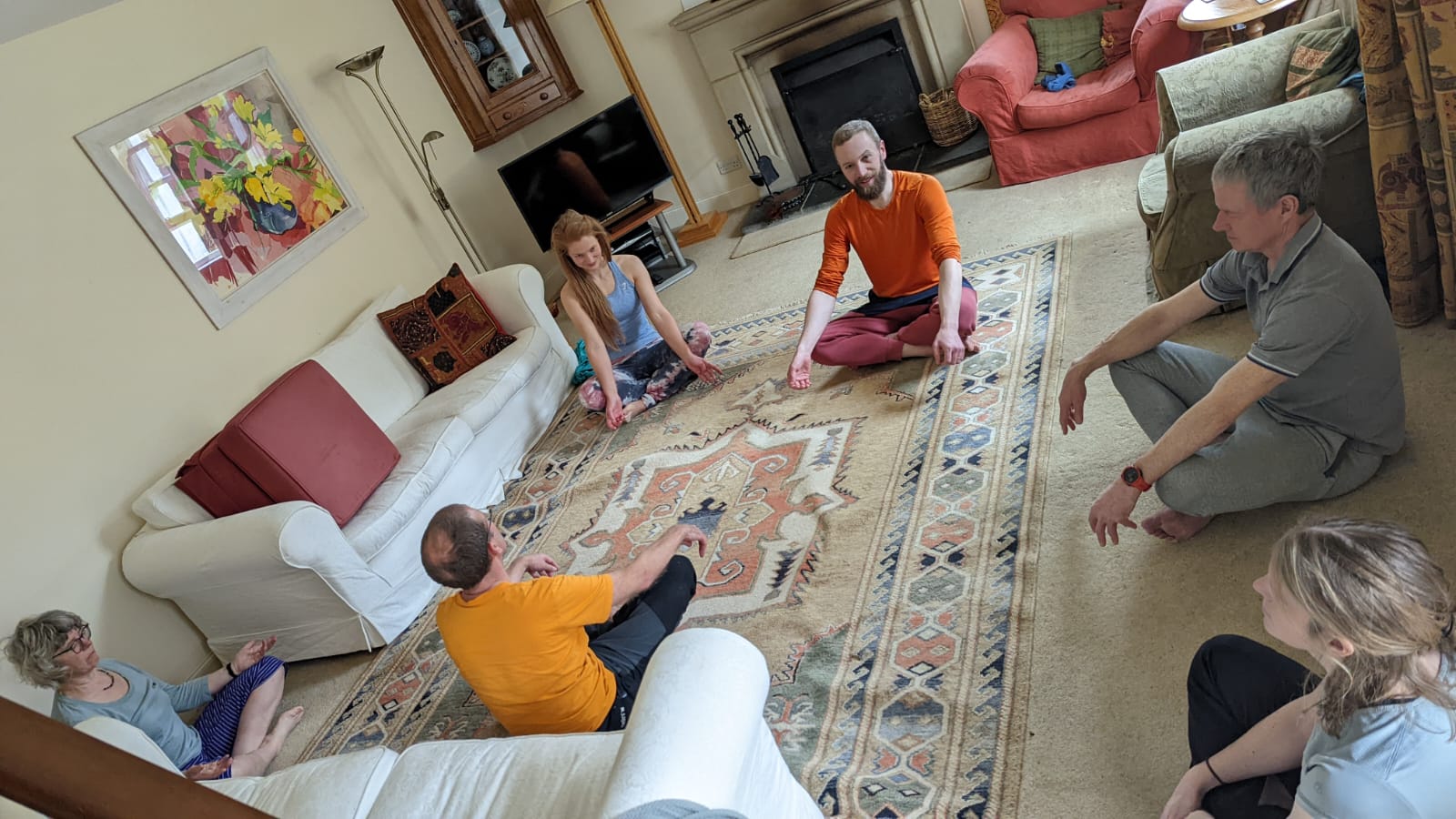 It was the perfect way to loosen off after the chilly morning swim. For the afternoons activities we split into smaller groups, 5 of us went for a walk up to a nearby summit, Meall a’ Mhuic. At 745m we hoped this might give us a better view of the snow conditions around Ben Lawers. Chris set out for a run and Lizzie and Duncan headed out for a cycle over to the pass between Ben Lawers and Meall nan Tarmachan, also doubling up a recce mission to assess the snow conditions on the mountains and on the road.

On Sunday we drove a short distance over to Loch Daimh with the view to climb up to one of the corries on Stuchd an Lochain which we decided looked to have more snow cover that the Ben Lawers hils. Initially we hiked up the steepest part of the slope in our walking boots, which was completely free of snow. Higher up we got the skis on and donned our ski crampons to gain more height on the hard packed snow. The ridge was wild and windy, but the sun was shining and the views over to Meall nan Tarmachan and the Lawers group were stunning 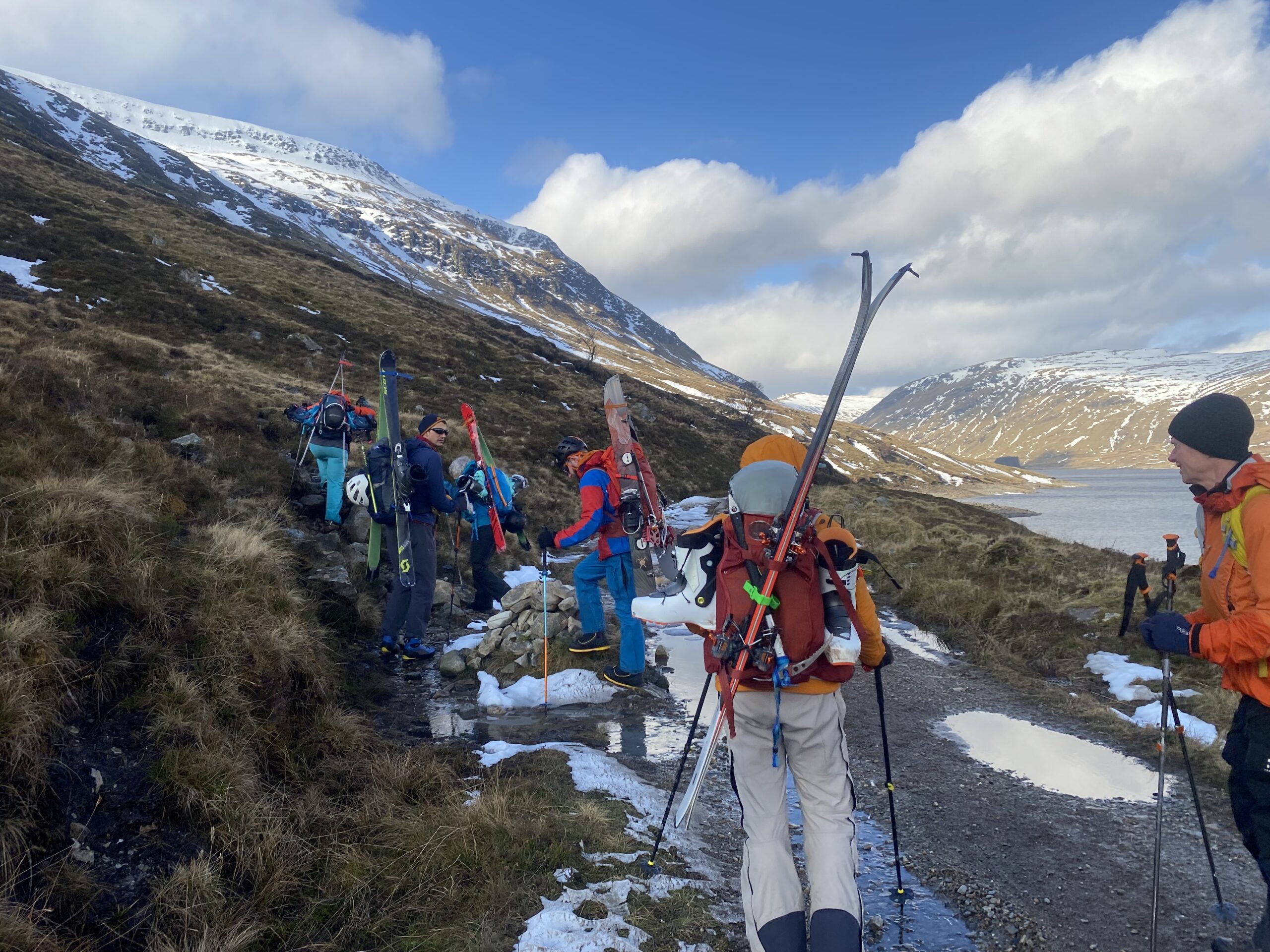 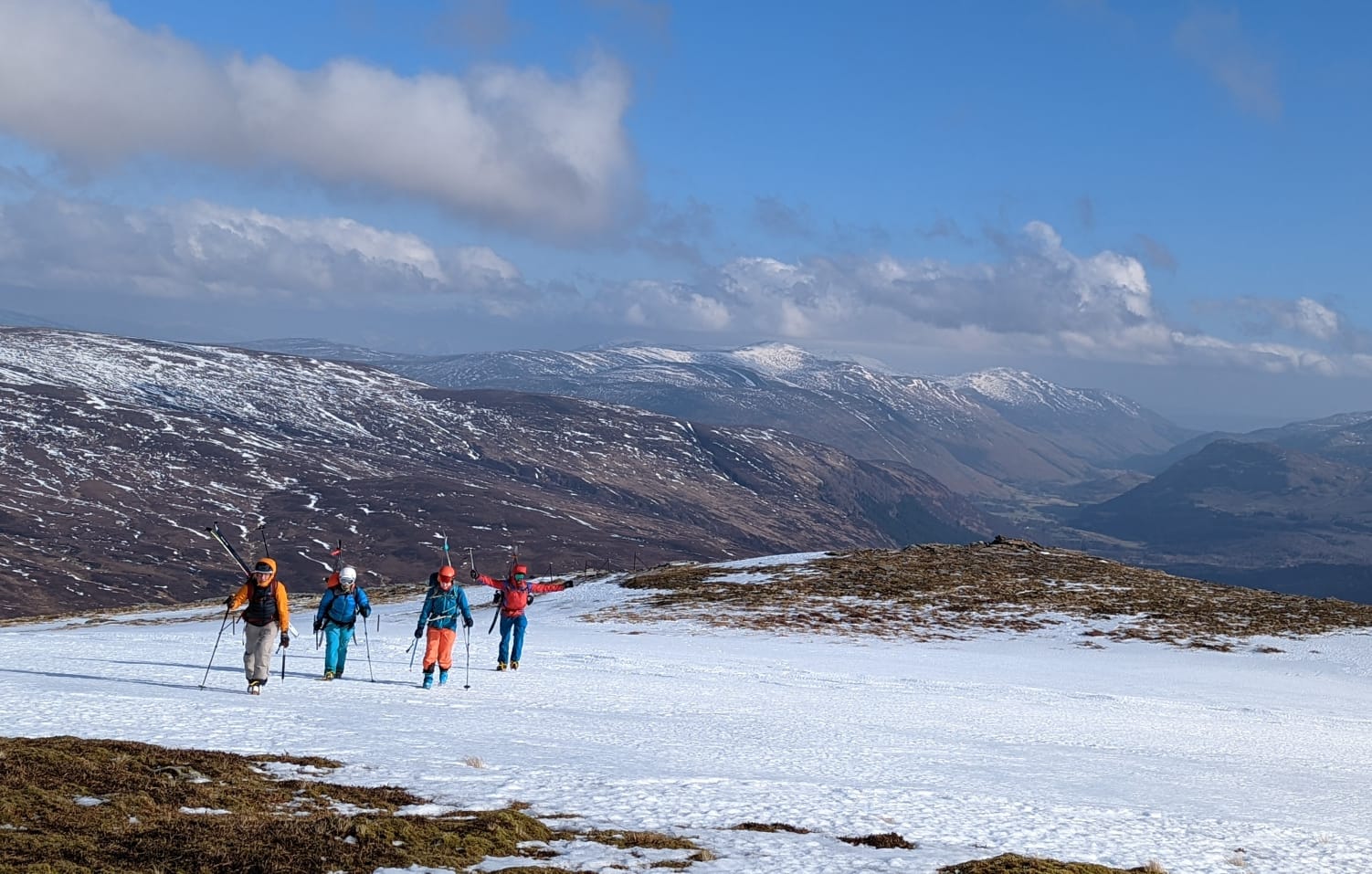 We could make out Buachille Etive Mhor to the west and the Ben Alder group to the north. Up and over the first top we followed the ridge round to find a snowy north facing corrie below the Munro summit. This would be our playground for the day! We scattered around the corrie, some making for the steeper descent at the top and others for a gentler entry point in the main bowl. We had great fun skiing up and down these slopes multiple times with a couple from the group heading up to the top of the Munro as well. 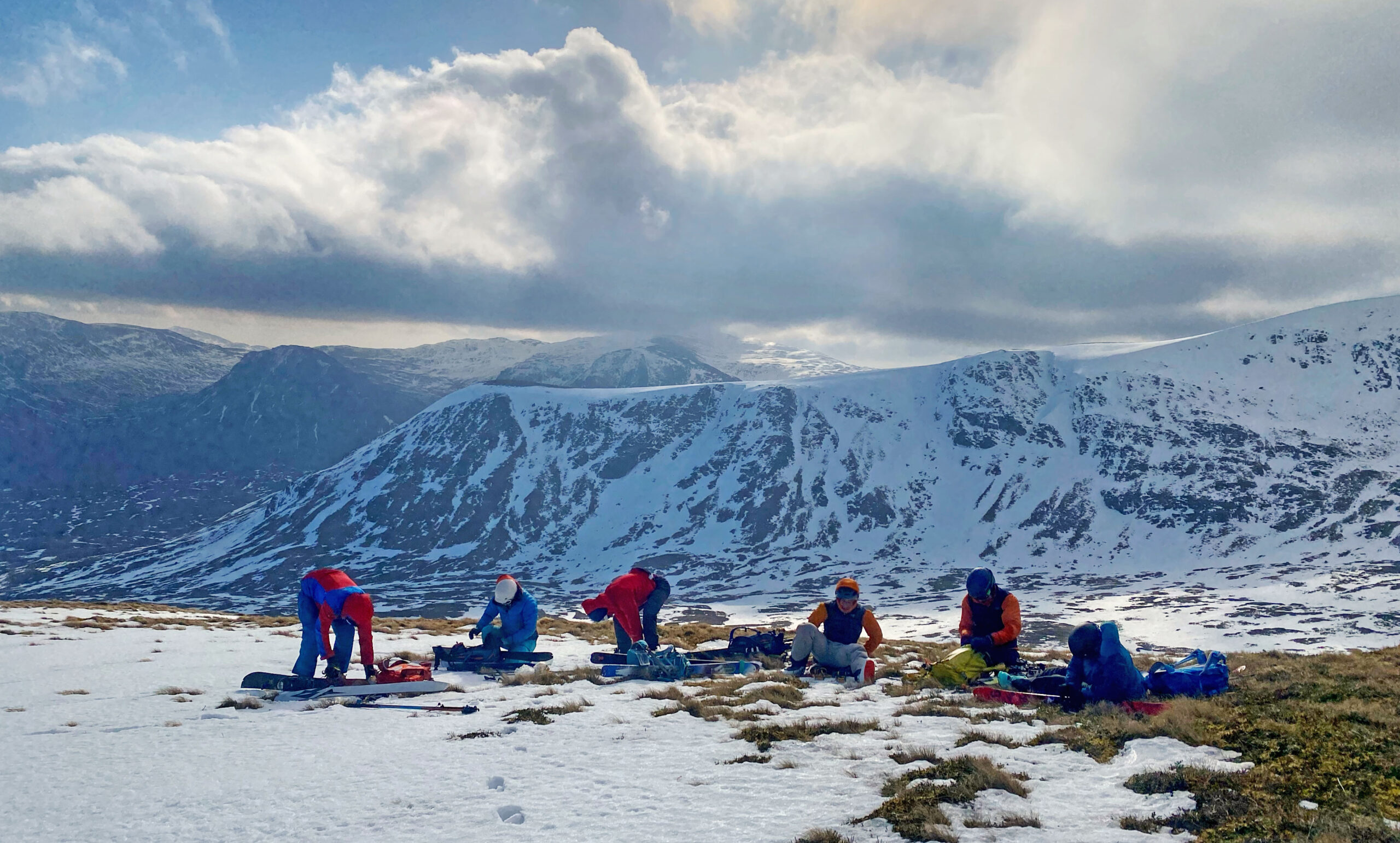 Extremely chuffed with our successful day we headed back to the house for an evening of more food, drink and good company. 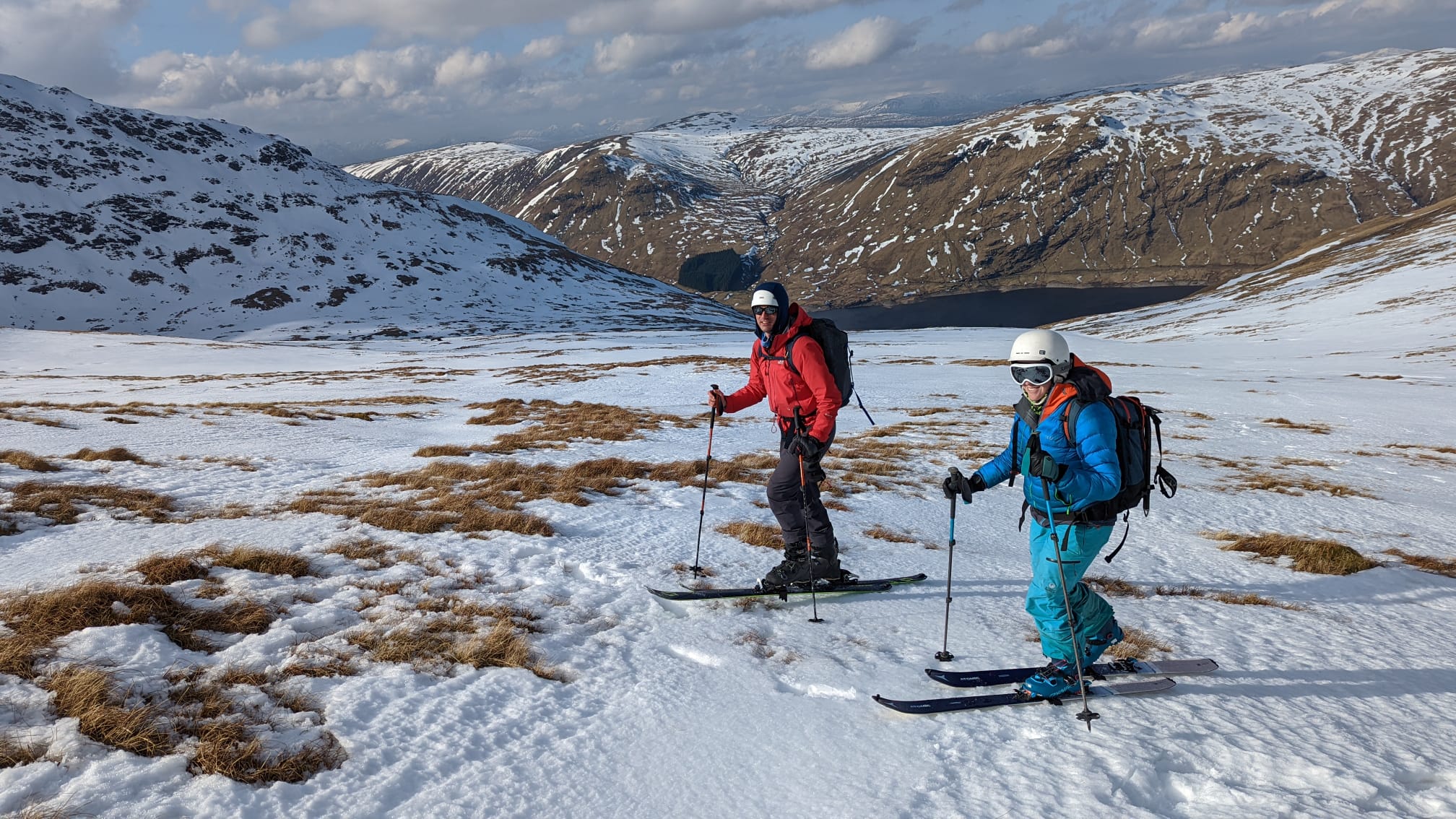 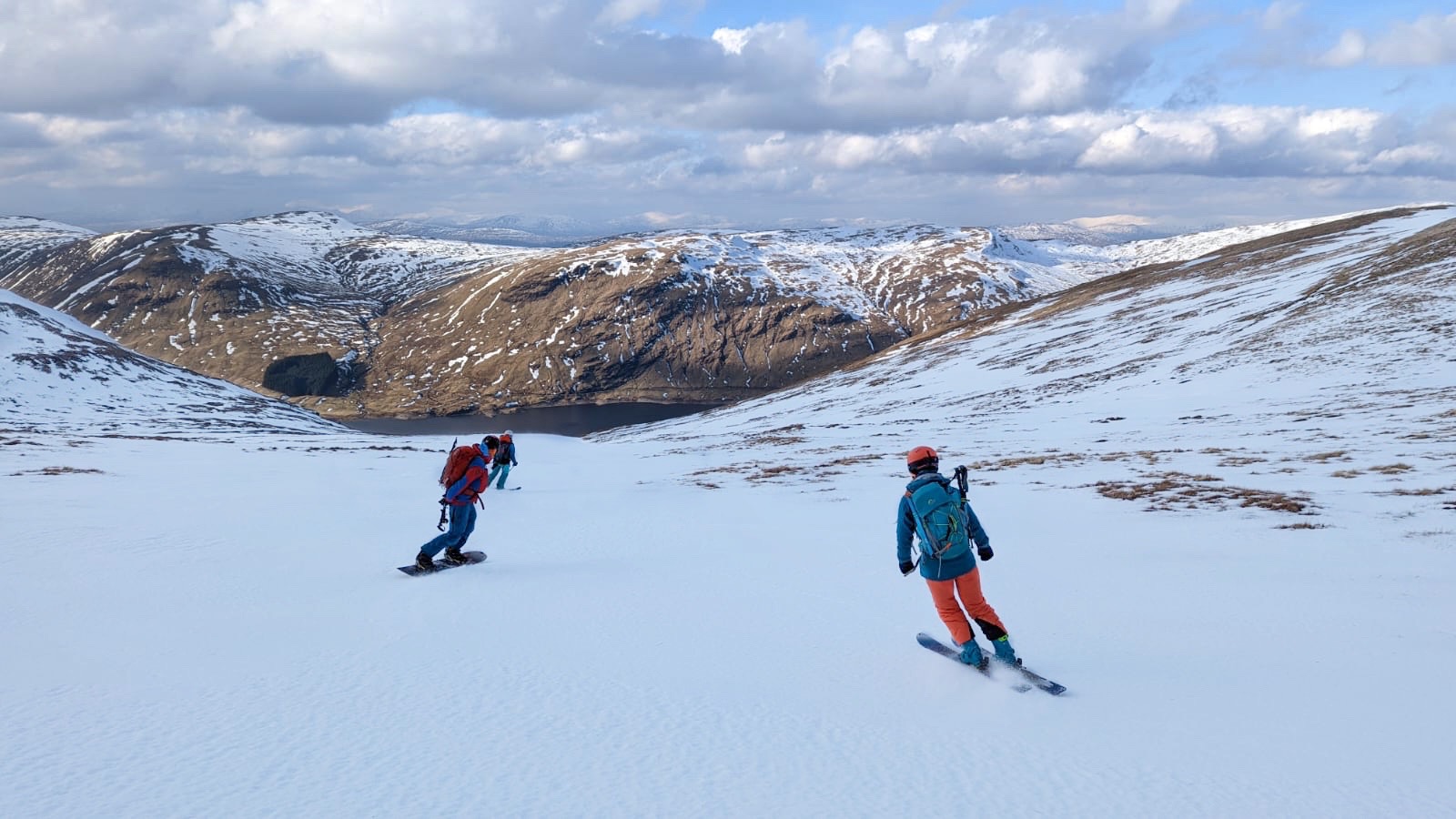 Monday morning brought milder weather still, with rain and cloud forecast for the morning with possible breaks in the afternoon. Most of the group were happy with the previous days activities and headed home. Three of us headed to Drumochter where we chose the slopes below A’Bhuidheanach Beag where after boot packing up a winding track we were able to put our skis on and skin up onto the ridge. The snow was slow and the slope gentle which made for an easy meander down towards the corrie. Back to the top & finding a long snow wreath to the side of a shallow gully made for a really fun descent. The perfect end to a wonderful weekend. 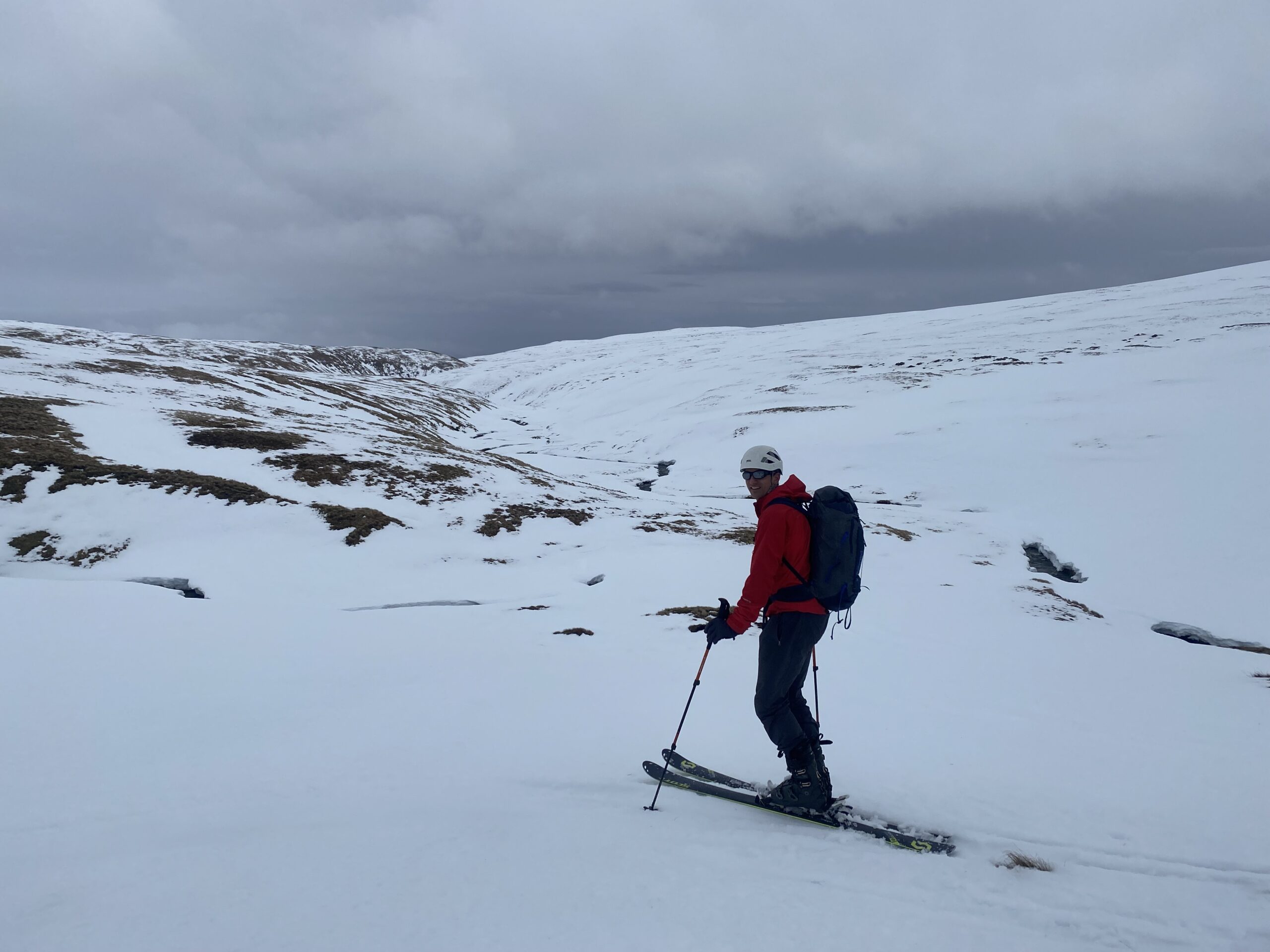 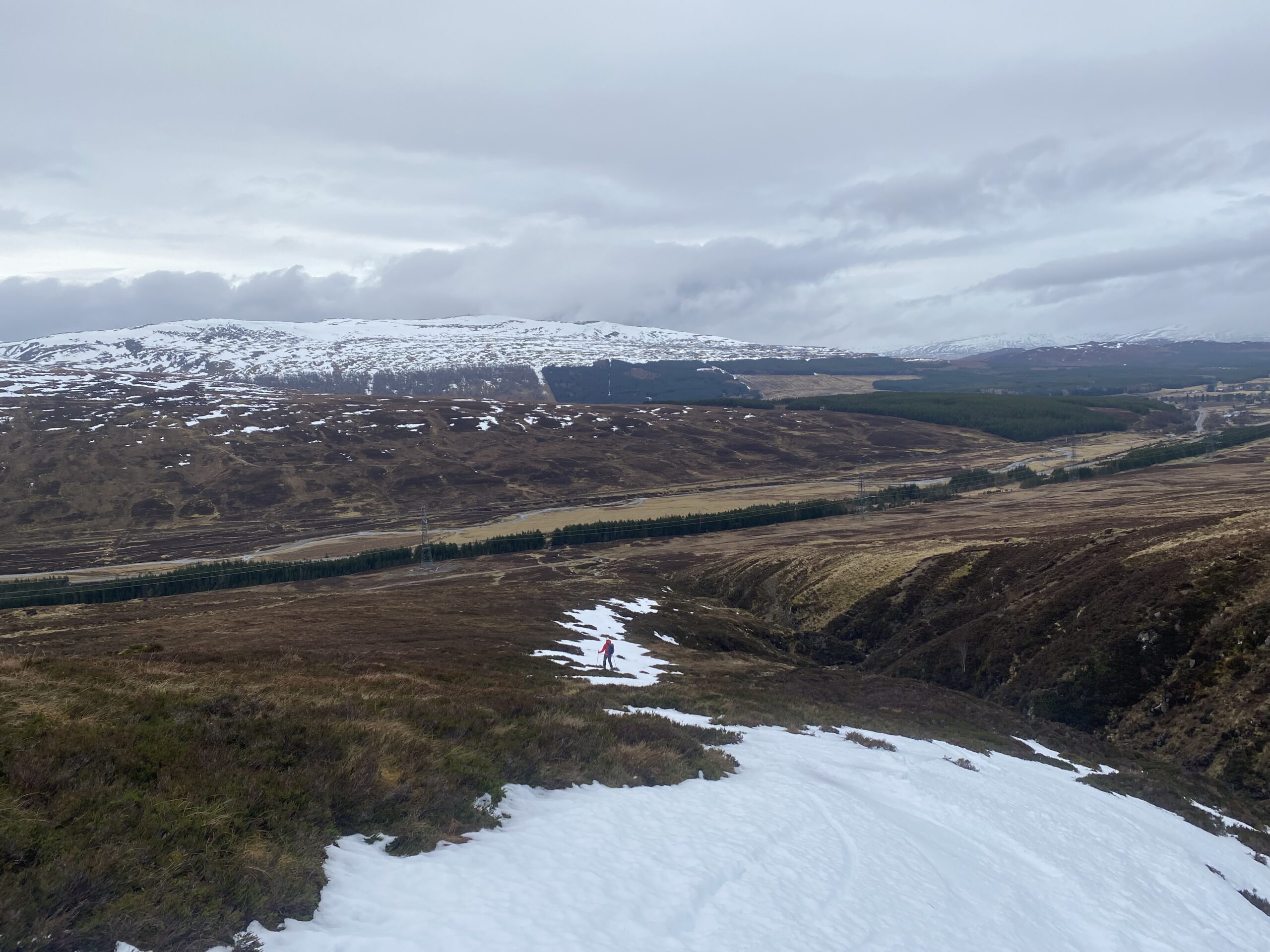