If you are at a loose end and you decide to research the Isle of Skye on Wikipedia you will learn several things. For example: ‘It is the largest and northernmost of the major islands of the Inner Hebrides’ and a quick look at a map will confirm this. Further: ‘The island’s peninsulas radiate from a mountainous hub dominated by the Cuillin, the rocky slopes of which provide some of the most dramatic mountain scenery in the country’. Anyone who has an interest in mountains will have probably seen pictures of the Cuillin’s alpine ridges of gabbro and basalt and there can be no question that these provide a spectacular and challenging venue for climbing, scrambling and, occasionally, skiing. The entry detailing the weather is short and to the point: ‘The climate is mild, wet and windy’.

As I took my rucksack from the car above Elgol harbour on the Club’s Stravaiging in Scavaig weekend I was thinking about the weather. “Stravaig” means to roam or wander, and on previous trips to Skye, encouraged by weather that Paul Whitehouse would have described as “Scorchio!”, I had twice climbed the Dubh Slabs from Loch Coruisk onto the ridge. On the last visit I had taken the boat from Elgol to the Coruisk landing stage in bright sunshine and high temperatures. This time was going to be different. 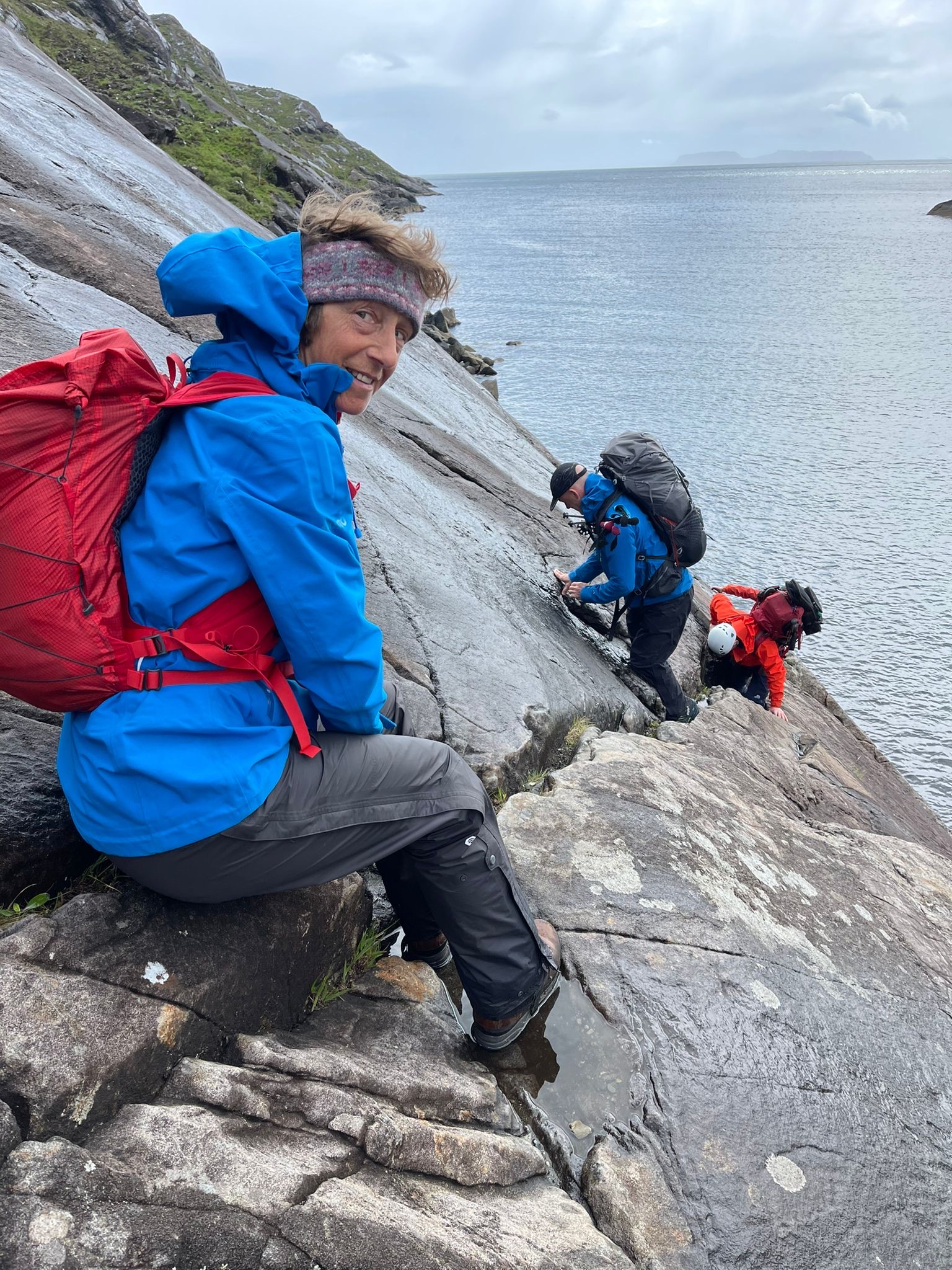 Our intention had been to take the boat again, and with car parking at the harbour and a walk of a couple of hundred metres from the water’s edge to accommodation in the Coruisk Memorial Hut, I had planned to carry a well-stocked bar, large quantities of food and possibly a paddle board. But by Thursday morning the skipper of the Bella Jane had called to say that an incoming weather system meant no sailings on Friday. As I got ready to leave for the 11km walk along the coast path, across two rivers and over the Bad Step I was wondering what the chances were of making it without getting rained on.

Big waves were already running across the Loch Scavaig, driven by a stiff breeze, but it was warm and intermittently sunny as far as Camasunary. The path was dry and easy to follow with precipitous sections along the cliff edge giving fabulous views out across a glittering sea to Soay.

Having crossed the first river with dry feet and skirting the base of Sgúrr na Stri I began to anticipate the Bad Step, which although I had crossed it before I could remember nothing about. Pictures showed a diagonal, rising crack across a cliff over the water and I wondered how big the sea had to be before the waves broke onto the rock. The reality was dry and exposed but not too daunting, and another kilometre took me over the stepping stones across the Scavaig River to the hut. 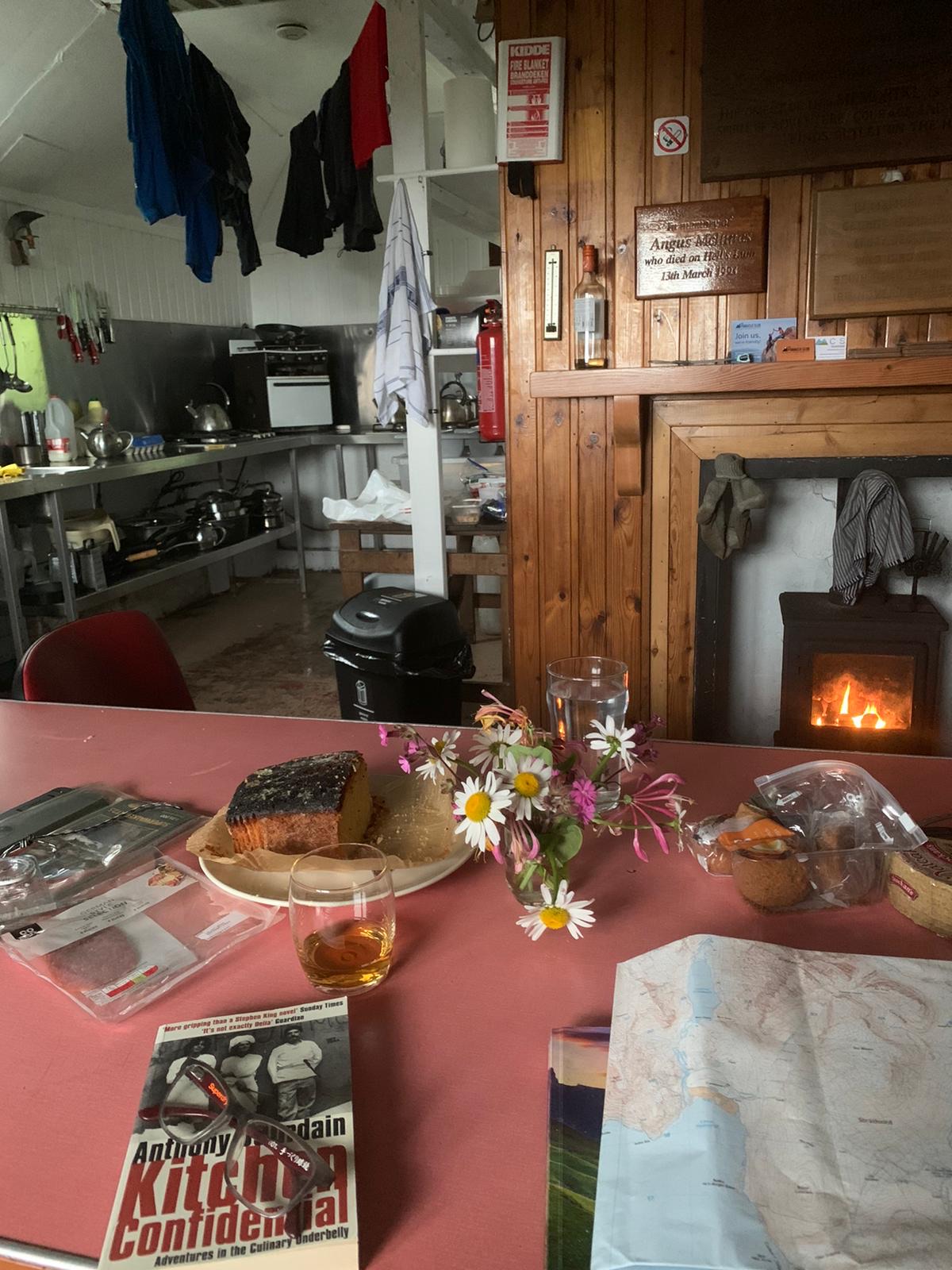 Other members of the group followed, having walked in across the col at Am Màm from the parking space at Kilmarie. Iain and Susan arrived first, accompanied by rain showers, with Simon and Al a little behind. Simon had strapped his guitar to his rucksack and protected the headstock with a climbing helmet. Rachel, Bradley and Tim arrived just as dinner was ready and as we talked and ate and appreciated the gas stove heating the room, the storm gathered force. Rain rattled against the windows and the wind howled in the chimney.

By morning conditions were worse and no one was in a hurry to get up. But fuelled by a substantial cooked breakfast and with some of the party needing to get to a train before the rivers got too deep, by midday we were ready to head out.

Around the corner of the headland and away from the shelter of the cliffs the squalls brought horizontal rain and the wind stripped the water off the surface of the loch in sheets. After half an hour being blown along the waterside, and knowing that we were returning into the wind, the consensus was it was time to go back. Making progress against the gale was arduous and gusts could make us stagger and, at times, need to use a hand for balance.

Back at the hut, with the steel door locked to stop it banging, wet clothes were hung to dry, lunch was eaten and tea was drunk. Some people opted for a nap, others read. The afternoon passed peaceably, followed by cake, more cooking and then a session with Simon on guitar and Susan playing her accordion, which she produced from the bottom of her pack.

During the night the wind dropped and the rain eased, so that on Sunday morning Iain was inspired to run around Loch Coruisk. The rest set out with the intention of climbing Sgúrr na Stri, but decided that with river levels high it made sense to pack up and retreat to the road.

The River Scavaig was waded, the Bad Step was reversed and at Camasunary we parted to make our ways back to our cars.

Wikipedia certainly got the weather right – it was wet and windy. No Munros were bagged, no ridges scrambled, no paddle-boarding was done. The weekend evolved around what was feasible given the conditions and what the mountains would permit. But great company, good food, a few drinks, music, and a comfortable, warm hut made for an excellent weekend in a beautiful and atmospheric location. I’m looking forward to going back, whatever the forecast. 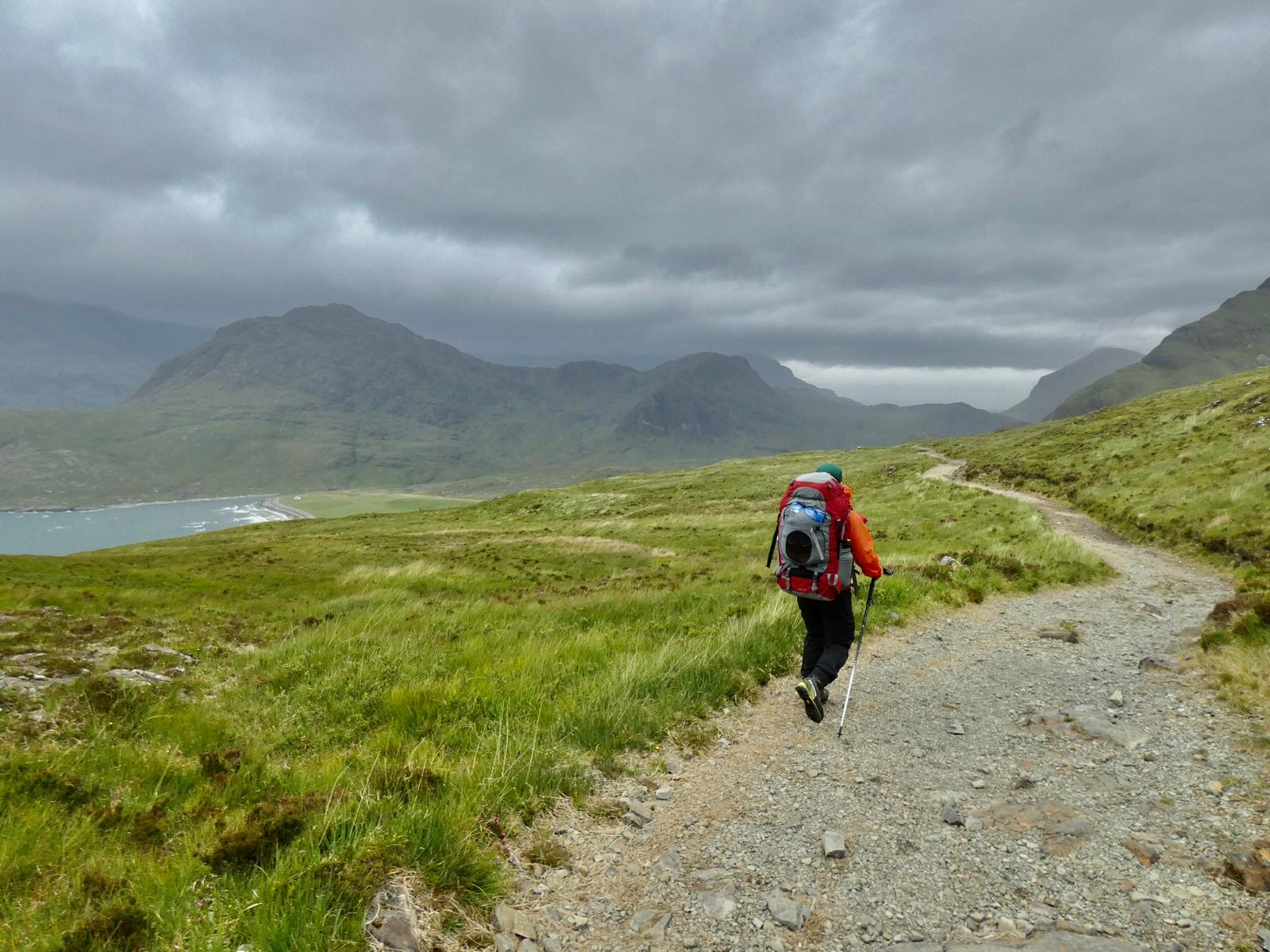 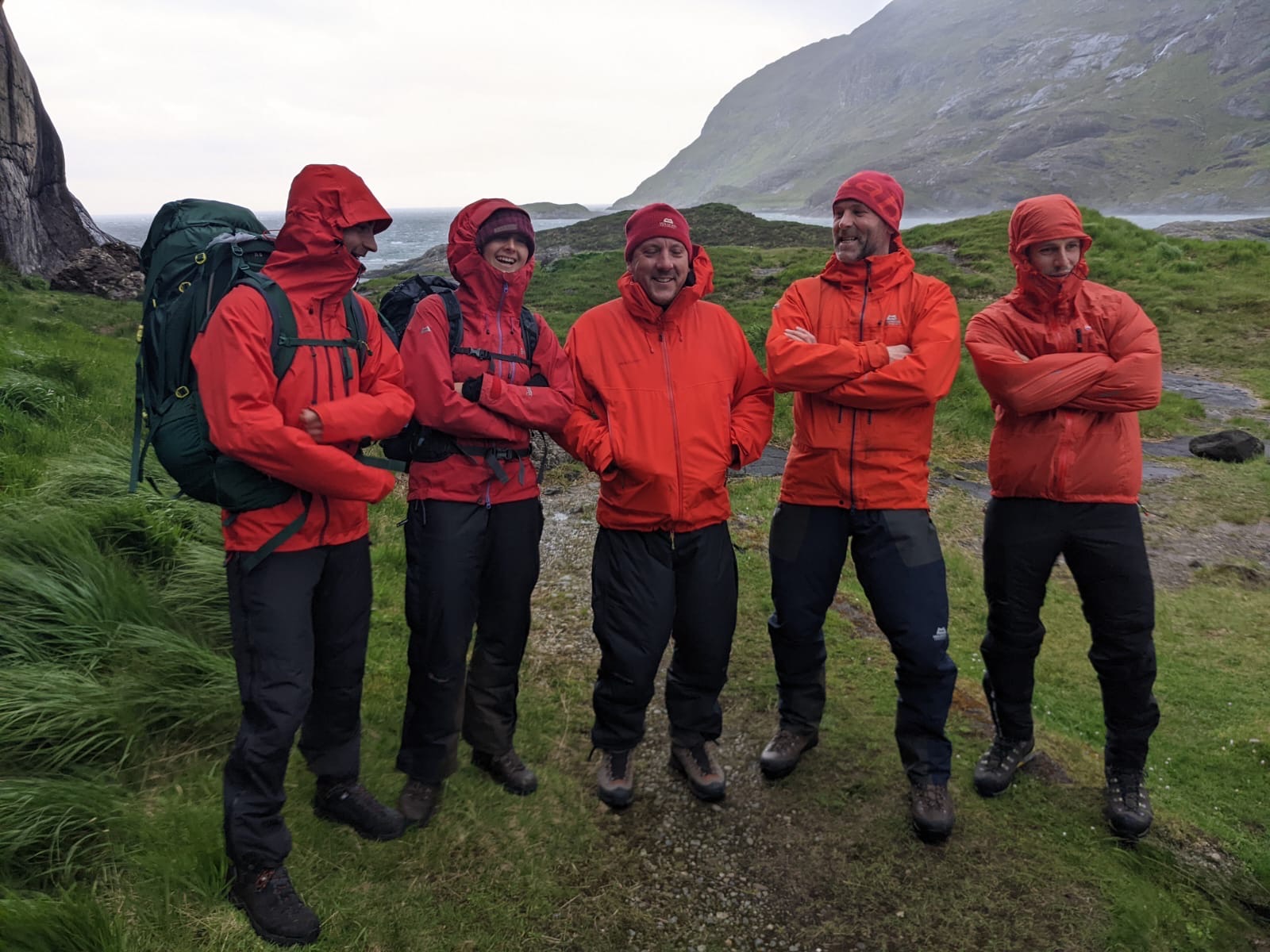