After many warm and dreich weeks, the possibility of snow in the forecast was cause for some excitement in the build up to the trip to Glenuaig Lodge. Driving through a blizzard in the dark on the way to the meeting point in Achnashellach, I was thankful for the club members who had more capable vehicles than my wee Ford Fiesta to get us the rest of the way…

Ellie and I were picked up by Ben in his 4×4 and the weekend of adventure was underway! After an exciting drive along the landy track we received a warm welcome at the lodge – the rest of the crew had arrived earlier in the day and were settling in nicely. With classic MWIS wind descriptors like ‘mobility tortuous’ in the forecast, alpine starts for the next morning were put to the back of our minds and instead we focused on the finer things in life like getting to know each other, eating cheese and drinking some tasty Ardgour ales that Ben had brought along.

Waking on Saturday morning, it was clear from the sounds of wind and rain battering the lodge that we would be in no great hurry to get out on the hill. Instead, we took the opportunity for a leisurely fry-up to steel ourselves before the inevitable sufferfest. 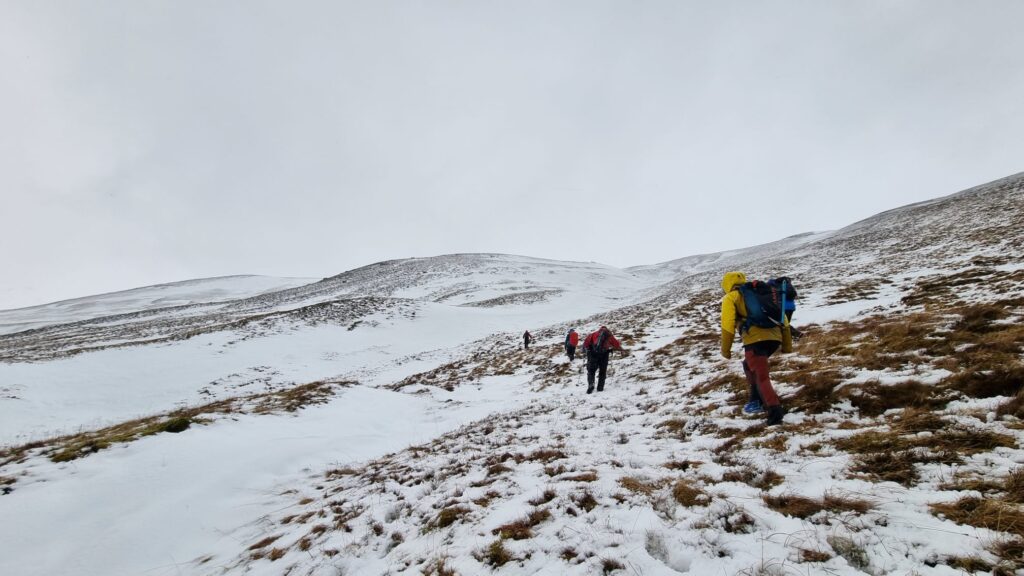 Walking up towards the summit of Mòruisg was a great opportunity to practice our winter navigation skills, if nothing else! With every gust that almost blew us off our feet, we hoped that the snow gods took notice and appreciated our efforts. In the end, we turned back mere meters away from the summit when the wind made it impossible to go any further. Avalanche education often highlights the dangers of being too goal-oriented and this was something we did not struggle with! Instead, we opted for bum and penguin slides back down to the lodge, surprised by some pockets of deeper snow that gave us hope for Sunday. 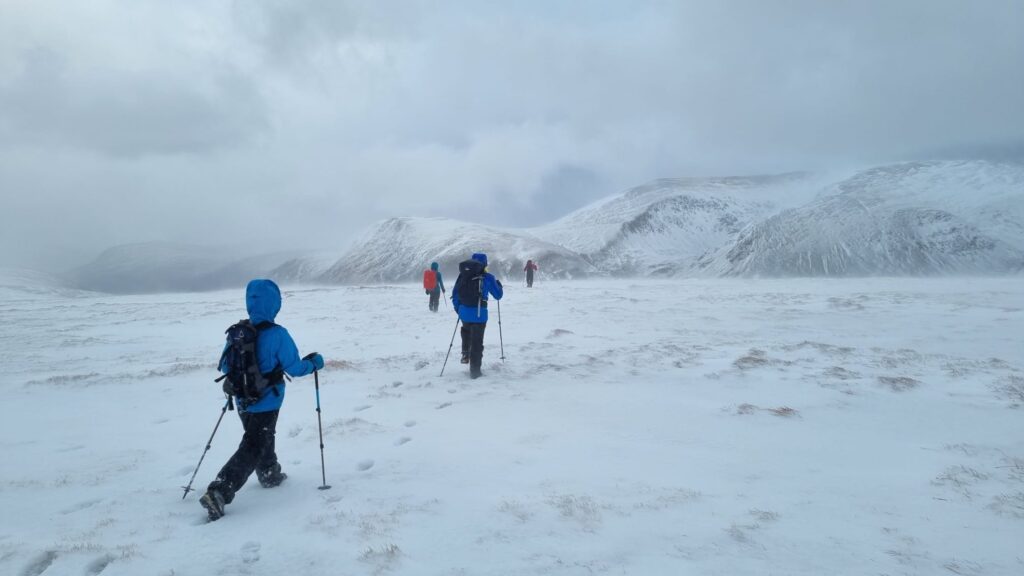 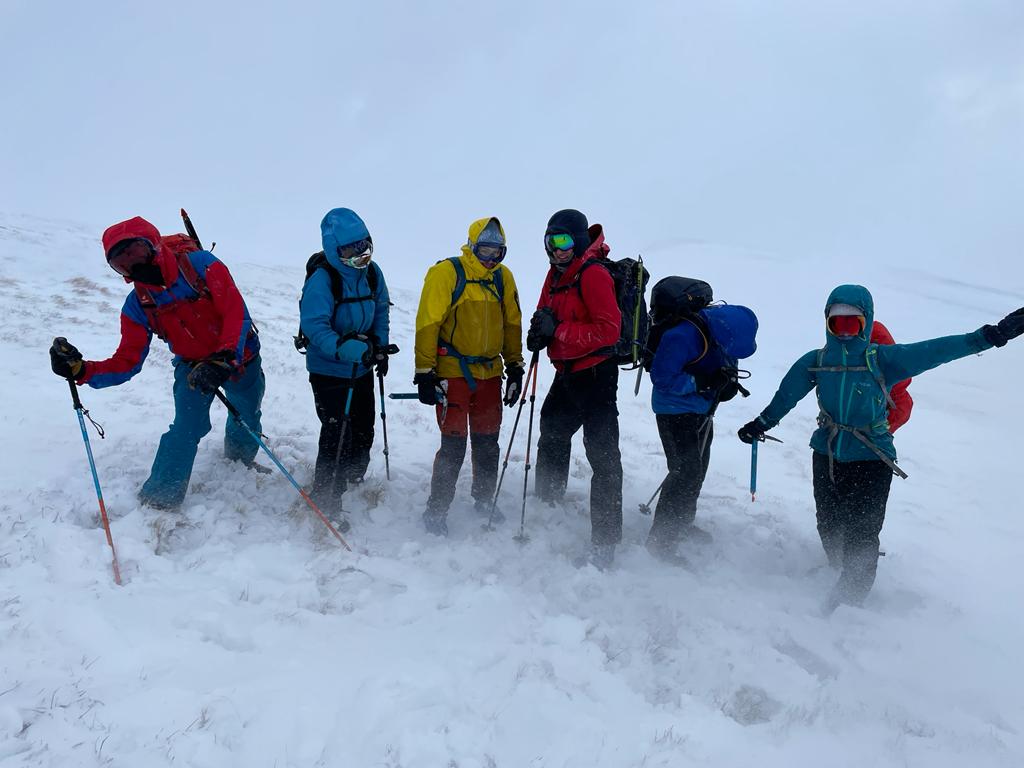 Back after our short struggle up Mòruisg, there was plenty of time for a leisurely afternoon. While Duncan and Ellie bravely headed out for an exhilarating dip, Dave M began preparing a leg of venison that he had brought up from Fife. David F had hiked into the lodge during the day and kept our appetites at bay with guacamole while dinner was in the works and we watched rugby. If Scotland could defend the Calcutta cup then surely it could also provide some skiable conditions for us on Sunday! Not only was Ellie able to nail the first goal of the weekend by bringing a couple of bottles of champagne to compliment the fridge full of prosecco but she also provided some delicious celeriac soup to kick off the meal. Dave’s venison was cooked to perfection despite the challenging Calor gas oven situation and the roast veg accompaniment made it feel like a Christmas dinner! Afterwards we enjoyed Andrew’s plum and apple crumble (tart, not sweet!) and Lisa’s pavlova which had impressively made it down the landy track in one piece. A few whiskies and we retired to bed, dreaming of snow. 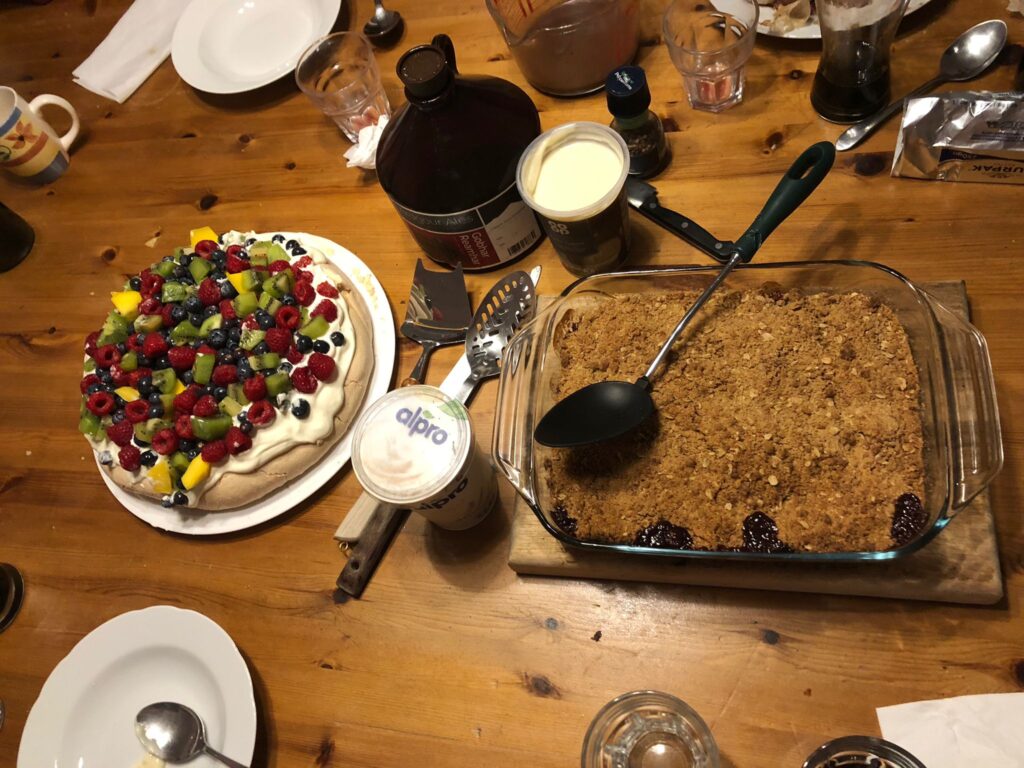 On Sunday morning the wind had died down but the moment I got out of bed there was a flash of lightning shortly followed by a rumble of thunder – a not-so-subtle hint that another slow start was in order. Overnight the lodge had transformed into a ski in ski out chalet, albeit the Scottish version where skiing over some heather is acceptable. Heading back up towards the slope of Mòruisg where we had been bum-sliding down on the previous day, we were able to skin to about 700m before there was more ice than snow and too much wind for a comfortable transition. 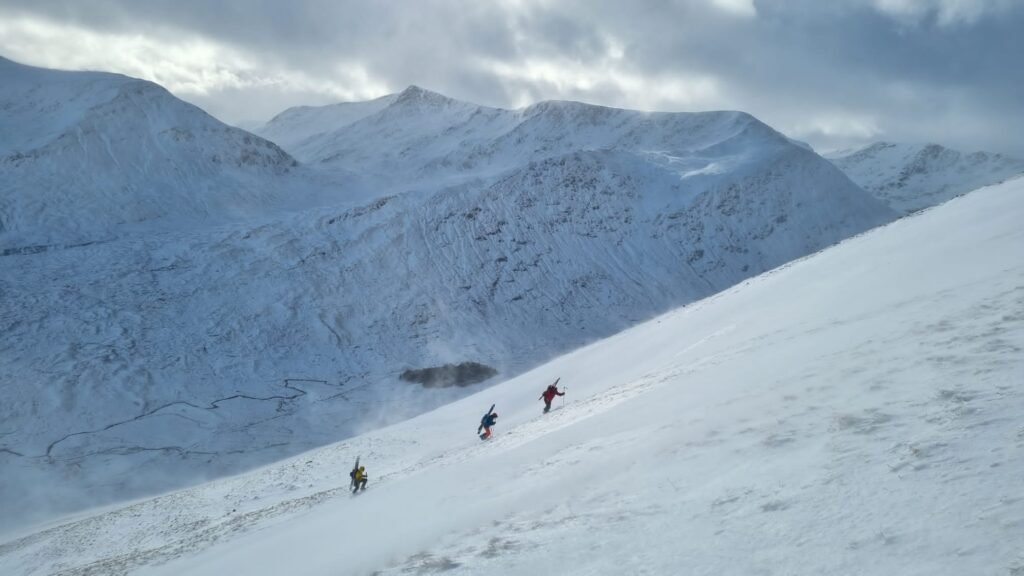 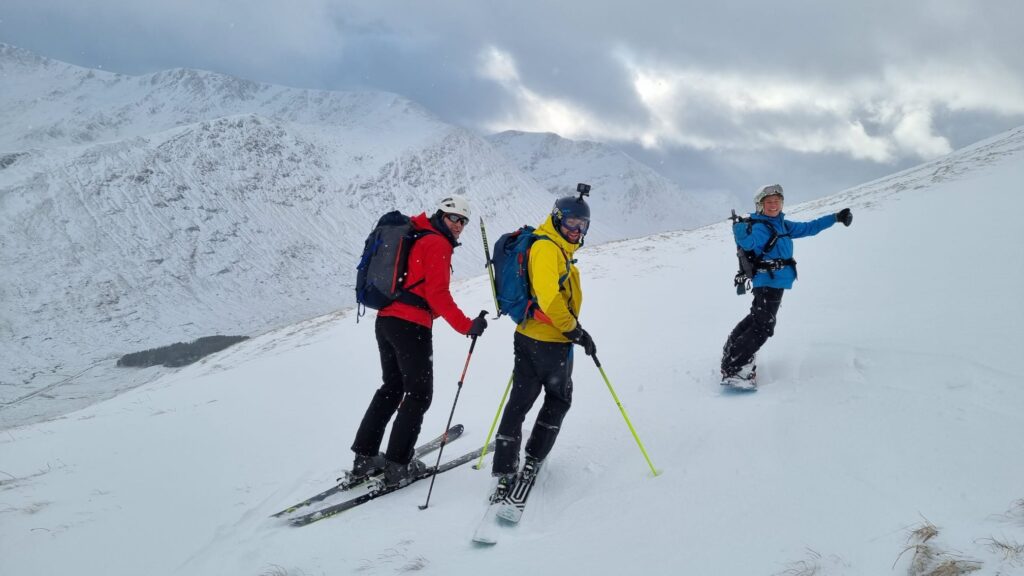 We were delighted to find pockets of deep, light, wind-blown snow on the way down that could easily be linked by riding over some more tussocky patches. Close enough to powder for us! Over the course of the day we all took turns of lapping the slope while others kept the tea going and looked after Emily. Duncan, Ben and Lisa even managed to squeeze in a night ski to the bewilderment of Lizzie and I, who watched on with binoculars from the lodge wondering why they were taking so long! It turned out that Lisa’s binding had stopped working which added to an already impressive list of gear faff which included Ben and Duncan carrying a few extra kilos of snow up the slope stuck to the bottom of their wet skins, Ellie’s non-functional risers and my glue failing after a couple of laps! 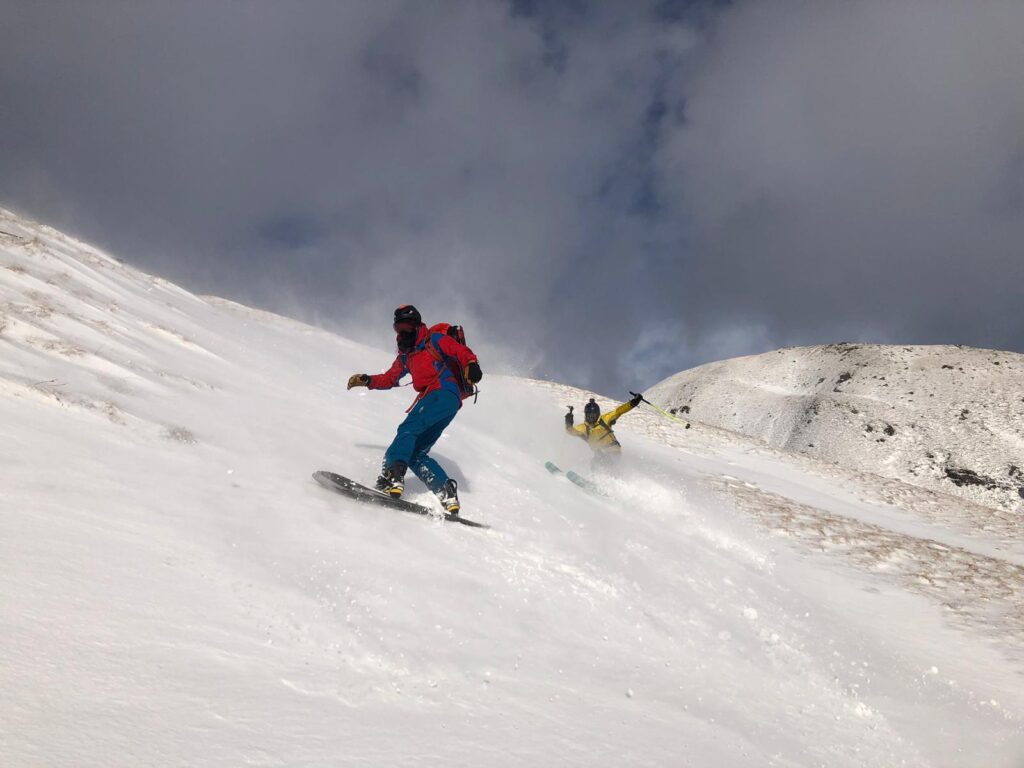 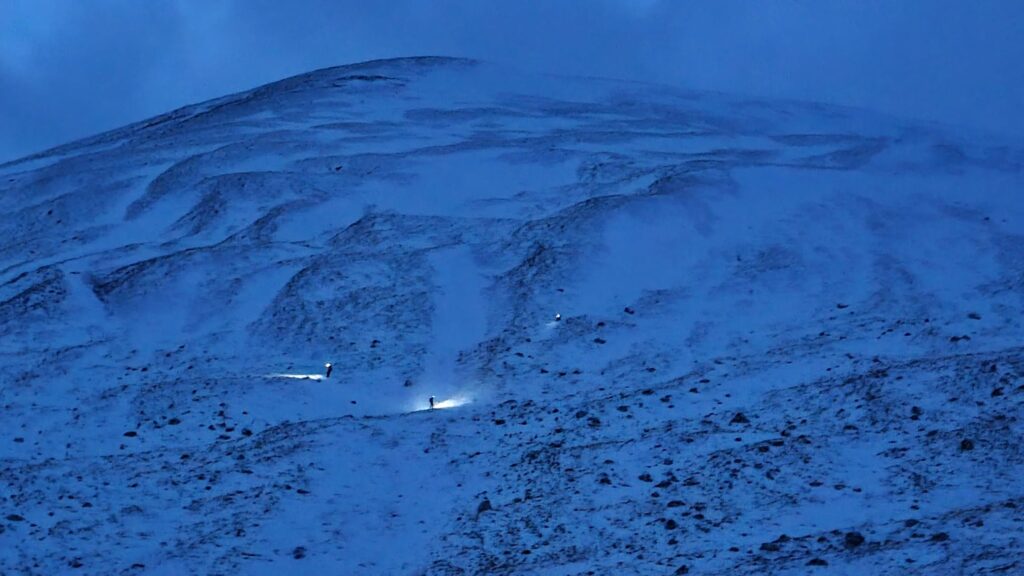 Andrew, David, Dave and Ellie left on Sunday afternoon, by which point we were all satisfied that the trip had lived up to its name. The rest of us worked on dusting off the rest of the champagne and food with low expectations for the conditions that Monday would bring. As expected, the next morning offered warm, wet, weather and a lot of the snow around the lodge had already disappeared. Lisa, Duncan, Ben and I stubbornly headed out for some watersports. We made our way up the ridge towards Sgurr Nan Ceannaichean until we couldn’t bear the misery anymore and descended down the NE aspect. After a wet and sticky descent through slush and heather (made more so by the skin glue stuck to the bottom of my splitboard) we made it back to the landy track with big smiles on our faces at the ridiculousness of our short excursion. We returned to the lodge to tidy up ahead of our departure as Lizzie headed out on her own soggy mission of running back along the landy track to the van, pushing Emily along in her all-terrain pram.

As we drove back to Achnashellach we were treated to the sights of swollen rivers, powerful waterfalls and some huge stags, all the while reminiscing about the great weekend we had. Glenuaig is a special spot and despite the wild weather and relative lack of snow, we had an incredible time taking in the surroundings and enjoying each other’s company. We only scratched the surface of what can be skied from the lodge with some more snow and can’t wait to return to explore further.